Dungeon of the Endless Preview

I hate the word ‘roguelike.’ Judging by the recent adoption of new phrases like ‘YOLO’ and ‘procedural death labyrinth,’ it seems I’m not alone in this (though it’s not exactly like that last one rolls off the tongue, either). Regardless of how I feel about the terms we use to describe it though, I very much like what the genre represents: the challenge of outdoing your own personal best.

Dungeon of the Endless is very much a roguelike at its heart – you’ll face procedurally generated stages, plenty of treasure discovery, and permanent death – but it manages to bring something new to the genre that gives it a truly unique appeal: controlling multiple characters at once.

Rather than controlling a single hero in a “fight or die” scenario, players start with two characters to swap between and will uncover more as they proceed deeper and deeper into the game. With different skillsets and upgrades, players will balance their time between both, employing tactics that will make or break them.

But we’re getting ahead of ourselves – I haven’t even told you what Dungeon of the Endless is about!

After crash-landing their spaceship in a dungeon (don’t ask us how – video game logic is sometimes a head scratcher), our two heroes find themselves searching floor after floor for the exit. The trick, though, is that they need to protect the generator for their spaceship as they travel. Without it they’d never be able to get back home. 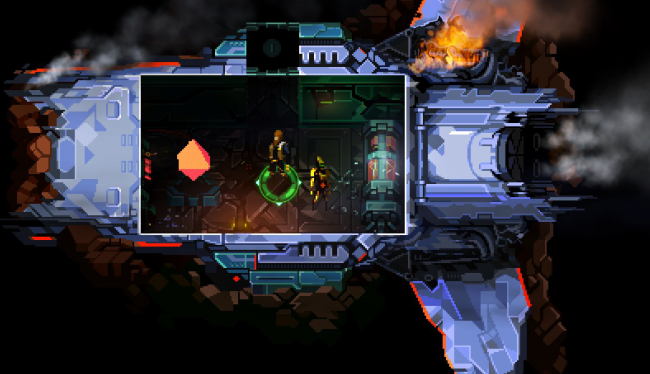 Gameplay breaks down as follows: explore the dungeon, protect the crystal (generator), find the exit, carry the crystal to the exit, do it all again on the next floor.

That may sound cut and dry, but really, it’s anything but.

As players explore new rooms they’ll gain resources that they can spend to upgrade their characters, build defensive items, and even set up resource generators. You’ll discover artifacts that let you develop new perks (hooray science!), merchants who are happy to exchange fuel for weapons, and other characters that you can recruit into your party.

And there are bad guys. Lots and lots of bad guys. 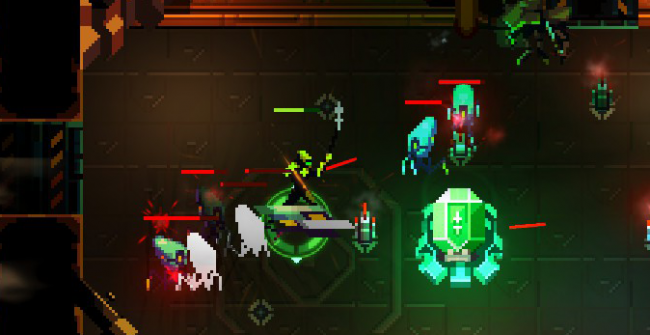 It’s this last part that makes Dungeon of the Endless‘ gameplay such a tough balancing act. Do you send your two starting characters out in different directions to cover more ground faster, or do you keep them together to increase their chances of survival? Should one of them stay behind and protect the crystal? After all, that’s a lot of ground to cover if you need to run back and save your ship. And which defenses and resource generators make the most sense to build first, and how can you best protect them?

Make one wrong move and you’ll be shocked at how quickly one of your crewmates can bite the dust. And remember folks – this is a roguelike. There’s no “insert coin to continue” here.

Being able to recruit new characters as you proceed through the dungeons will help get your numbers up, but it won’t help much if you lose a character you rely on heavily. Last night, for example, I was playing my best game yet – an hour and a half in, and on the sixth floor. Then the one character I’d been using for exploration (and leveled up much faster than his friends) ran into some trouble that he just couldn’t survive. Five minutes later, my three other characters followed suit.

The game is currently in alpha as part of the Steam Early Access program (so you can jump in too if I’ve successfully piqued your interest), so there’s plenty more they’ll be looking to add before launch.  They do a pretty good round-up of what’s missing from the game on the Steam store page, and hopefully some other additions will appear before its full release. That said, there’s plenty to love about Dungeon of the Endless even in its early state.

As a game I settled down to check out for a few minutes on the weekend, I was surprised to find those minutes turn into hours. There’s still a lot of work to be done before this is a finished project from Amplitude Studios, but from a gamer’s perspective, you’ll get more than your money’s worth if you pick it up now.

Besides – who doesn’t love a good roguelike?