Doctor Who: Worlds in Time Preview 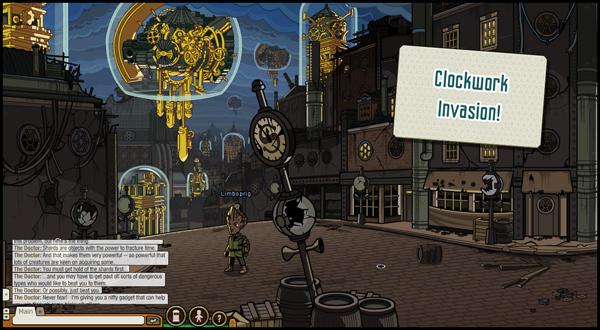 Three Rings breaches time and space to bring you Doctor Who: Worlds in Time

Admit it – you’ve always wanted to be The Doctor. Or at the very least, his companion. Well great news, Whovians! Three Rings, developers of the popular Yohoho! Pirates and Spiral Knights, have teamed up with the BBC to produce a game that lets you be The Doctor’s right hand man (or woman); Doctor Who: Worlds in Time.

We’ve recently had a chance to go hands-on with Worlds in Time, and Three Rings involvement in the game couldn’t feel more present. Worlds in Time is rife with puzzle mini-games – so much so that we’ve been jokingly calling it Yohoho! Doctor Who around the virtual office. But as anyone who’s ever played Yohoho! Puzzle Pirates will tell you, such influence is definitely a good thing.

Within moments of you adventure beginning, we were playing a Puzzle Bobble-style game to open the locked door on the TARDIS. Minutes later, we were repairing an electrical terminal in a manner befitting Pipe Dreams. All the while you’ll be taking part in a grand adventure as you help The Doctor recover time shards that have been scattered and frozen throughout time and space.

While mini-games form the basis of Doctor Who: Worlds in Time‘s gameplay, they’re not the entirety of what you’ll be doing. The Doctor has been kind enough to give you your own room in the TARDIS, which you’ll be able to decorate using coins you’ve earned. You’ll also be able to tackle tasks in your room like crafting upgrades for your “gadget,” a device that looks suspiciously like a Sonic Screwdriver, or change the clothing of your in-game avatar.

Doctor Who: Worlds in Time is currently available in public preview, and the developers are promising “new features are being added to the game all the time.” Be sure to check back with Gamezebo for our full review once the game is in a more complete state.