DinoFour Looks Like The Lost Vikings with Adorable Dinosaurs 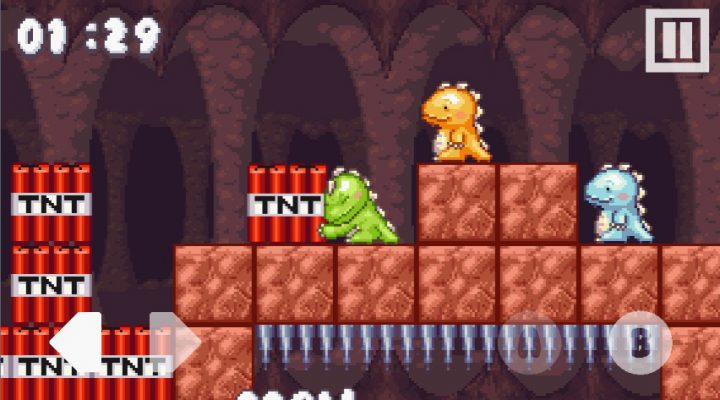 Players will control four dinosaurs as they make their way through over 70 levels, in search of their misplaced dino egg at the end of each stage. Each dinosaur has his own special ability to make traversing the enemy- and hazard-filled stages possible: green can push heavy rocks, orange can shoot fireballs, purple can walk on ceilings, and blue can remain airborne for brief periods by flapping his tiny arms.

As in The Lost Vikings, the reptilian team will need to pool their abilities in order to create new paths, trading off intermittently when one teammate is trapped where another can progress in order to reach each stage’s end.

The reward for doing so is, besides pride and progression to the next level, an adorable animation of dinosaur bliss. These little snippets of charm, coupled with the variety of obstacles and enemies visible in the trailer above, have us more than excited for DinoFour’s release. We can’t wait to jump, bounce, dodge, and flap our way past anthropormorphic flame-ghosts, Thwomp-esque blocks, venom-spewing gargoyles, and more.

Thankfully, we won’t have to wait long. DinoFour has been submitted to Apple and should be available on iOS sometime in June, with an Android release date TBA.

Battle Decks is an Upcoming Military CCG with 1000+ Cards