Home / Upcoming / Dandy Dungeon is the Next Weird, Wonderful Title from the Creator of Chulip 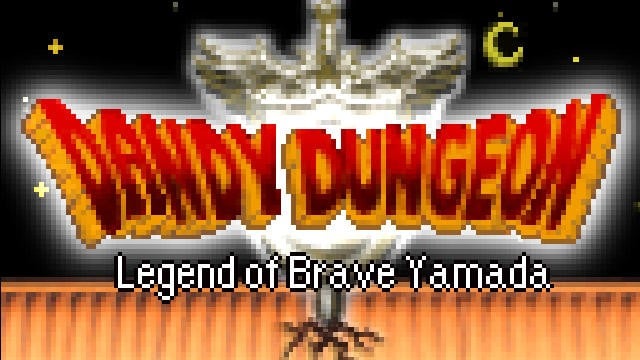 Although Onion Games is not especially well known in the West as of yet, its founder and director, Yoshiro Kimura, was the creator of a number of quirky and unforgettable titles released in the late ‘90s and early 2000s. Most of these never made it outside of Japan, but of those that did, Little King’s Story is probably the most well-known. It was a colorful strategy game originally released on the Nintendo Wii (and later ported to the PS Vita and PC) which put players in the shoes of a tiny king who had to guide his lemmings-like followers as they completed menial tasks in an attempt to expand the kingdom.

Although Little King’s Story presented a unique premise in a lovably playful way—Kimura is credited for the roles of producer, director, and “humming”—it doesn’t fully demonstrate the weirdness that has come to define Kimura’s works. For a better grasp on that, players should really look to Chulip. 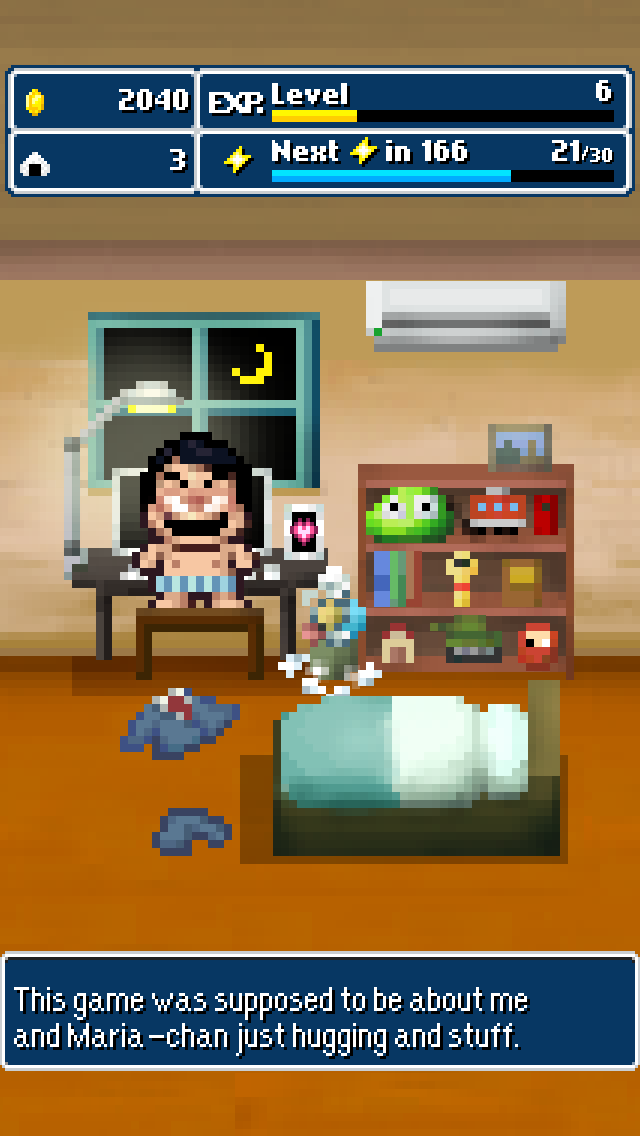 Chulip almost certainly benefited from Katamari Damacy’s surprise success. Before Katamari’s worldwide acceptance, Kimura’s oddball 2002 PlayStation 2 release would have been considered too weird for Western audiences. Though it did take nearly five years after its Japanese release for a publisher—Natsume, of Harvest Moon fame—to bring it to America, the game they brought over retained all of the quirky characters, strange themes, and inexplicable humor of the original.

Chulip’s plot revolves around a young boy who moves to a new town and falls for the neighbor girl. However, in order to earn her affection, he has to improve his standing with the entire village by snagging a kiss from each townsperson. The path to doing so varies with each character, from playing a game of red-light/green-light with them to learning an alien language to taking a bath properly. You can discover hints about characters’ kissing desires by spying on them in their underground homes, which is creepy yet crucial: if you try to kiss someone at the wrong time, or without enough kissing experience, they will hurt and/or kill you. Coupled with the weirdness of the characters themselves—a telephone pole-fused man, a Big Boy-headed policeman who shoots anyone wandering the streets after 7PM, a road sign with a human face—and the fact that raiding trashcans potentially full of “poopie” is one of the less weird in-game activities, you should have a general idea of the amazing strangeness that is Chulip.

Dandy Dungeon is extremely reminiscent of Chulip in spirit and personality. It utilizes a similarly quirky roster of characters and oddball plot, but transfers them to an entirely different genre and style of game. Much like the young star of Chulip, the hero of Dandy Dungeon—Yamada—is spurred on by love. After putting all his efforts into developing his first video game—to the point of losing his job—Yamada meets the girl of his dreams in his next door neighbor, Maria-chan. He decides that the only way to win Maria’s affection is by creating the greatest game ever, and adds her to his in-development game as the princess that the hero (modeled after Yamada) must save. 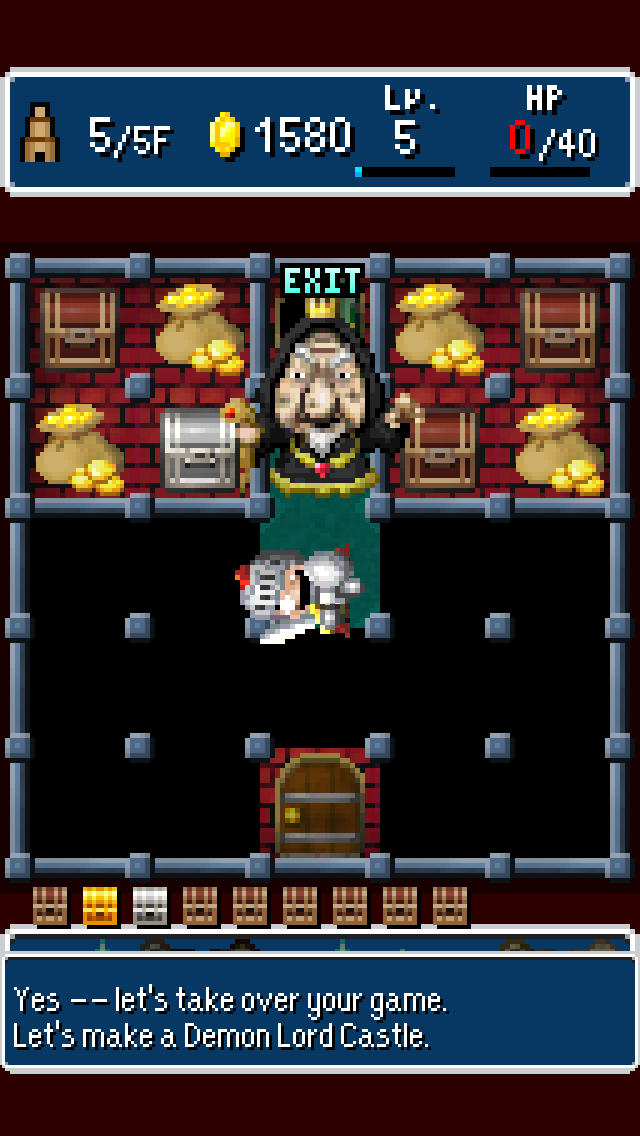 There are two main sections to Dandy Dungeon: most of the gameplay takes place in Yamada’s game itself, where he needs you, the player, to help him debug new features. Yamada’s game is a dungeon crawler / puzzler in which you’ll tackle multi-floor dungeons that are traversed by drawing a single line from the start point to the exit, similar to Arukone-style puzzles. After you draw the path for the hero, he will follow your steps, picking up any treasure and battling any enemies he comes across. Drawing a line that covers the entire floor will earn you bonus treasure, but it’s trickier to do (you have only 20 seconds to draw your line) and will put you in the path of more danger. Luckily you’ll also have items at your disposal that can be used anytime, such as health potions or magic spells, aiding hero Yamada in his quest.

In between dungeon raids you’ll return to real-life Yamada’s apartment where he spends his nights developing the game. This area is mainly used to upgrade your in-game gear, buy new items and equipment, and review your goals and collections. This is also where the story takes place, as various NPCs will show up at Yamada’s door and their interactions inspire him to change his game. Meeting Maria-chan adds her as the hero’s focal point; being fired by his company’s chairman drives Yamada to add him as the evil in-game boss; being approached by other programmers allows him to implement new systems he hadn’t thought of. 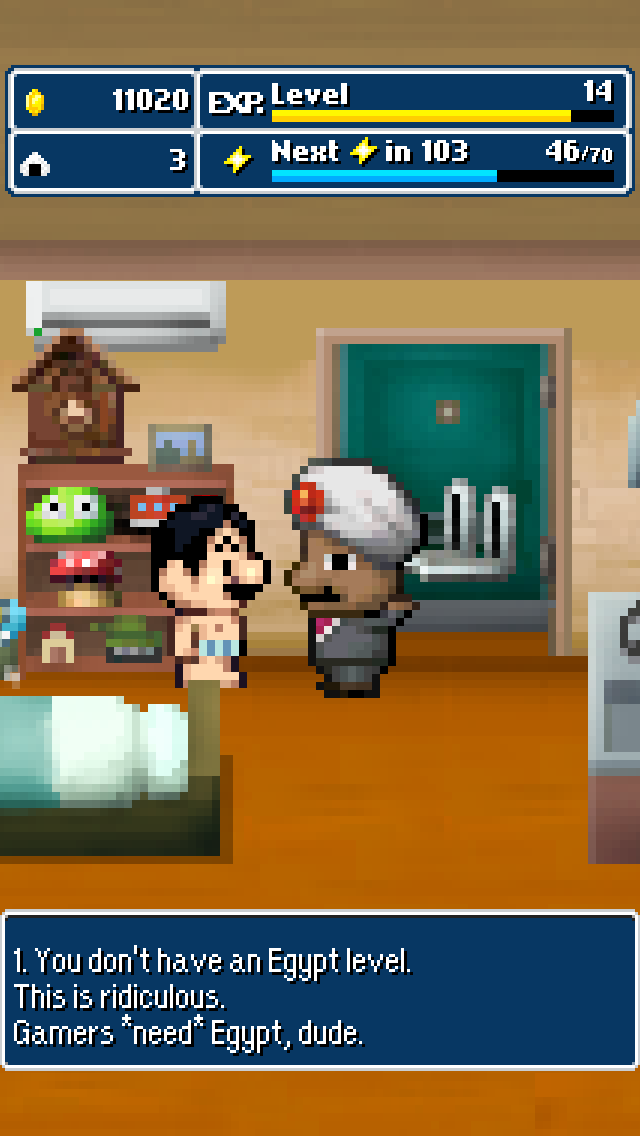 Like Chulip, these characters and their interactions with Yamada are always strange and wonderful: Aja, the “The Best Programmer,” has two laptops that levitate after him like charmed snakes, and he adds new features to Yamada’s game in a flurry of CLICKCLICKCLACK sessions. One character randomly came into Yamada’s room, put out a cigarette on his wall, told him he was a cool guy, and punched him in the face. Yamada himself only programs in his underwear and gets fired up by anything “sucky” that happens to him in the apartment, like the guy punching him or a samurai beating him verbally and with a sword (“I will channel this suck into my videogame!”)

There’s an evolution to Yamada’s game that we get to witness firsthand, as it begins with only very simple features and is built out over time through his experiences. He adds items and treasure as the game progresses, then procedural dungeons, then different dungeon settings. That jerk samurai inspires him to create a Tokugawa-themed cave while the woman who calls him a “textbook 36-year-old chubby layabout piggy” is made the swine-controlling evil queen of an in-game tower. The game is full of the same type of wonderful vocal music that was so charming in Chulip, with humming, “buh-buh-buhbuh-buh-buh” type fanfare when you pick up items, and warning cues like “Da-da-da-da-danger zoooone” in enemy-packed areas. 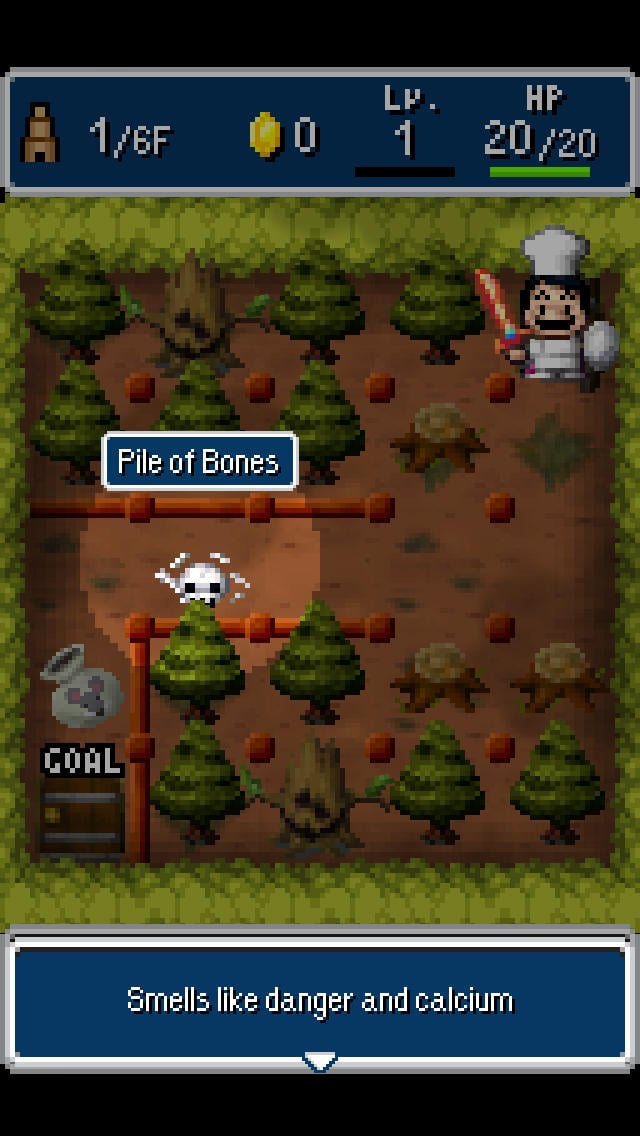 I hesitate to list too many details, as a large part of Dandy Dungeon’s joy is the surprising randomness of Yamada’s encounters in-game and out. Besides the hilarious and wacky interactions, the dungeons themselves are fun and challenging to tackle, with tons of treasures to find and utilize, as well as varied enemies and obstacles that must be handled in unique ways. There are 64 “Dandy Collections” of matching equipment to uncover which award bonus stats when worn together–like the extra defense of the Heavy Metal armor or the increased speed of the Pantyman set. You’ll need to upgrade weapons and evolve them to unlock special skills that will give you a leg up on the many different monsters Yamada has created, and choose items wisely for the dungeon you’re about to enter. The forest stages clouded by dense foliage require a different approach than the shortcut mazes of the pipe-filled sewers: a bag of rats is more beneficial in the former and a can of bug spray helps out in the latter. The entire game is an absolute treat stuffed with things to do that fills the weirdness niche of games like Chulip, but in the always-with-you format of mobile.

Dandy Dungeon is currently out on Android and soft-launched on iOS in Canada and Australia, with its official worldwide release date unknown at this point. Based on what we’ve played of the Canadian version, which is very polished, complete, and utterly endearing, we hope that the rest of the mobile world will be able to play it soon and help Yamada-kun finish his dream game.