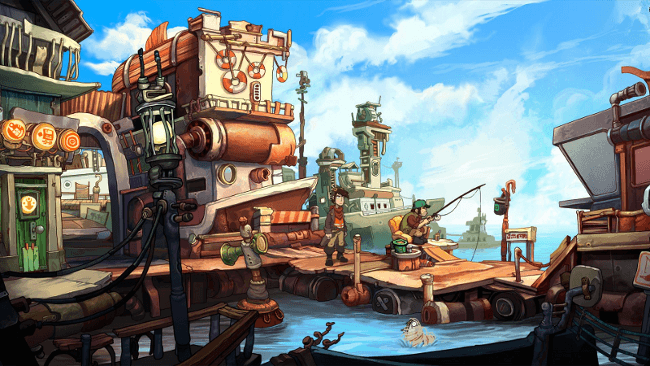 I reviewed a game called Deponia last month, and gave it five stars because it was totally awesome. I’d like to say I’ll spare you the details, but that would be a lie. I’m happy to use this preview as another opportunity to sing the game’s praises. How’s that for objectivity?

Deponia is a gorgeously animated, 2D adventure game in the grand old style of Lucasarts classics like Monkey Island and Full Throttle. Humor takes a lead role, which wouldn’t be possible if not for top notch writing and the consistent, coherent tone of all of Deponia’s misfit characters. Rufus, the lead role, is preoccupied with leaving his home planet — an understandable ambition considering his planet’s role as a galactic garbage dump. Deponia’s setting alone has more warmth and character than most AAA titles manage to scrape together in their entirety. If Lucasarts still made good games, they would look alot like this one.

And, bless the German developer Daedalic, there’s more to come. Deponia’s sequel, Chaos on Deponia, is set to release on November 6th (my birthday… how nice of Daedalic!). For any of you out there who can read German, the press release that informed me of this also invites fans to visit a revamped website with new info and screenshots. For those of you who can’t read German, an English version of the site features some spectacularly poor translations — it might be worth a look just for that.

As for the story of this new game, Chaos on Deponia picks up where the first one left off. Stuck on Deponia (the dump planet’s name), Rufus needs to cook up yet another plan to get off. This time his goal is slightly more complicated — Rufus wants to reunite with Goal (punny, eh?), the love interest of the first game who gets away in the end.

If the original Deponia is any indication of the sequel’s quality, Chaos on Deponia will be a truly top-shelf adventure game. Fans of the genre — and new adventure-gaming recruits alike — should pay heed to my effusive praise and play the Chaos on Deponia as soon as they can. But not without playing the first one though. You’ve got a month. Hop to.