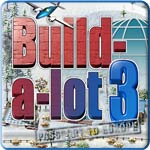 We have some good news for fans of Build-a-lot and Build-a-lot: Town of the Year. The third instalment of the construction-themed strategy game is launching very soon. Hipsoft gave us a rundown of the new gameplay features you can expect to see in Build-a-lot 3: Passport to Europe.

As the title implies, this time around you’ll get to travel to nine locations all over Europe, including Portugal, Switzerland, Italy, France, Greece, Germany and Ireland, while building new types of European-style house.

The premier lots from the first Build-a-lot game are back, and you’ll also be able to add landmarks that give the neighborhood positive appeal. On the flipside, you’ll also have to deal with rundown houses. These give a negative appeal, provide no rental income, and are worth only 50% of their market value. However, a savvy builder can restore rundown houses and flip them for huge profits.

Build-a-lot 3 introduces new weather and time effects such as snow, rain and dusk that have different effects on productivity. Outdoor jobs like painting and landscaping, for example, will take a little longer in the rain and snow.

New service buildings have been added, meaning you can now build a Police Station, Fire Station, Post Office and Hospital. These buildings will respond to various crises that occur with your buildings. The Fire Station will respond to small house fires, while the hospital will send an ambulance to respond to medical emergencies. Finally, there’s no better way to stop noisy neighbors than with a police response.

According to Hipsoft, Build-a-lot 3 offers more levels than previous games and is also more challenging, especially if you want to get all of the Expert stars. It’s also much easier to replay any level using the in-game Passport.