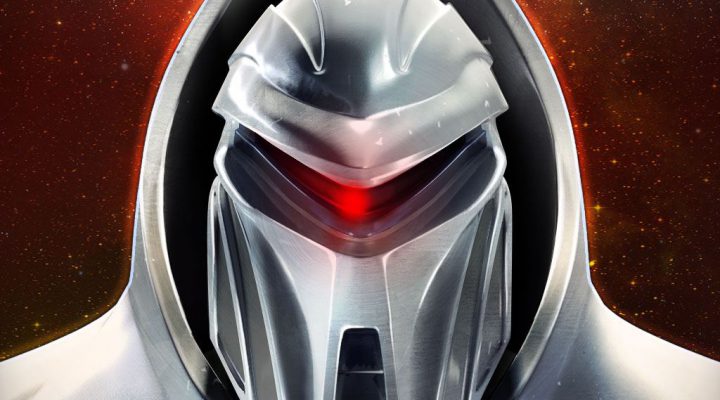 We stumbled upon a surprising blast from the past this weekend on the Canadian App Store: Ludia has soft-launched a collectible character RPG based on the Battlestar Galactica series from 2004. A number of Gamezebo’s “Canadians” have been playing it the past few days, and our time with it has been mostly favorable. It’s a polished, loving homage to the show and a fairly forgiving free-to-play RPG. Its ability to hold our attention long-term remains to be seen, but I have no intention of docking my fighters anytime soon.

My experience with Battlestar Galactica: Squadrons has been shaded by two factors: one, the reimagined BSG is my favorite TV show of all time, and if you haven’t seen it before I recommend you stop reading here and go rectify that. It’s available on Hulu or you can borrow my DVDs, I have backups. The second influencer is that I usually don’t enjoy CC games. Final Fantasy: Brave Exvius almost changed my mind on the genre, but ultimately still boiled down to the same old “roll for good characters; abandon anyone previously good the minute you get someone better; decimate everyone if you luck into a high level character; otherwise grind, grind, grind.” And for better or worse—better if you like those aspects of the genre, worse if you’re me—that has been BSG Squadrons as well. 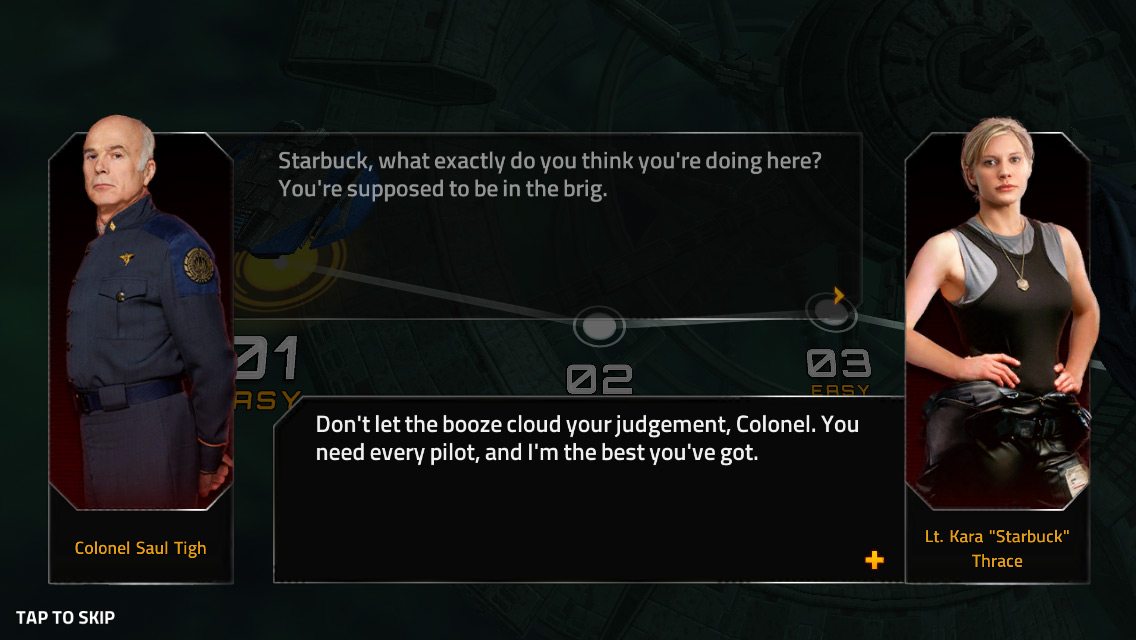 The game follows the plot of the reimagined series exactly, starting with the initial attack on Caprica from the pilot. You are in the role of Commander William Adama as he commands the remaining Colonial military forces in retaliation and escape from their Cylon attackers, while simultaneously trying to regroup humanity by rounding up any ships that were safely outside the Colonies when the Cylons attacked. The game’s (and show’s) plot is presented through between-stage dialogues with other characters, such as Colonel Tigh, Chief Tyrol, and Starbuck. Unfortunately, since you are playing the role of silent protagonist Adama, you won’t get to see or read anything he has to say. (Also, since the game is using between-seasons promotional images of the characters, anyone without a standalone promo photo is highly unlikely to show up in-game. Sorry, fans of Billy Keikeya or Leoben.)

The writers are obviously BSG fans and have done a great job of writing the dialogue to match the characters, distilling entire episodes into short burst events that will progress the story. Tigh and Starbuck will butt heads over who’s more reckless, Gaius and Head Six will have imaginary arguments, and Tyrol and Boomer will have secret rendezvouses in the supply room. The events are so true to the show that I’d warn anyone who hasn’t watched the series but intends to someday to do so first, as you’ll inevitably run into all the spoilers as you play. Those same players may also find some events confusing, as the game jumps around when needed and occasionally skips key introductory scenes. For instance, we don’t meet Caprica Six until she is a figment of Gaius’s imagination onboard Galactica, which might lead non-fans to wonder who either of those characters are. 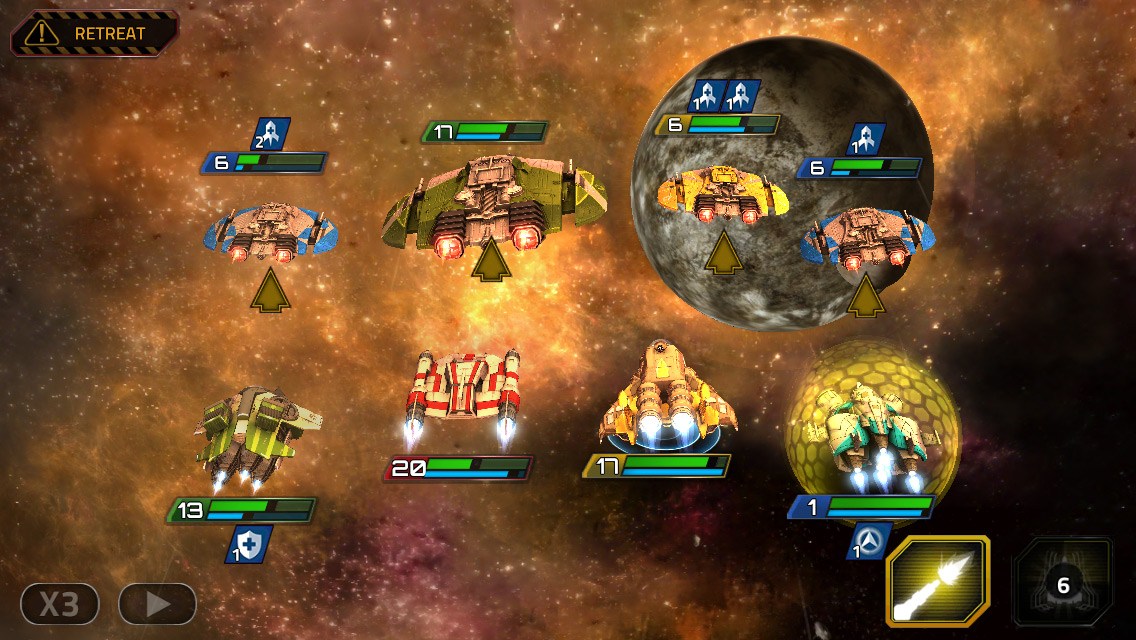 When you’re not reliving BSG through its plot points, you’ll be fighting battles against Cylon raiders. The primary gameplay consists of turn-based RPG match-ups between your Colonial ships and the Cylon enemies, who are constantly hunting down your ragtag fleet. Battles are fairly short 3v3 (on average) encounters that are won when all Cylon attackers have been defeated. Although you’ll have access to recognizable ships like the Viper Mk. II and Raptor, Ludia has done a commendable job of creating a variety of other ships that still seem plausible in the BSG universe and have their own lore attached. Having a diverse selection of ships at your disposal, such as the Celtans’ defensive Wombat or the Librans’ support Vulture, allows you to build your team as you please without getting Viper exhaustion.

To add to the diversity, each ship has an assigned color—red/Alpha, green/Beta, blue/Gamma, yellow/Omicron, purple/Omega—that is strong and weak against one other color. You might have a powerful Alpha Viper but be up against a squadron of Gamma Cylons, red’s weakness. Each ship also has up to four different abilities, active or passive, with abilities varying between ship types and colors. 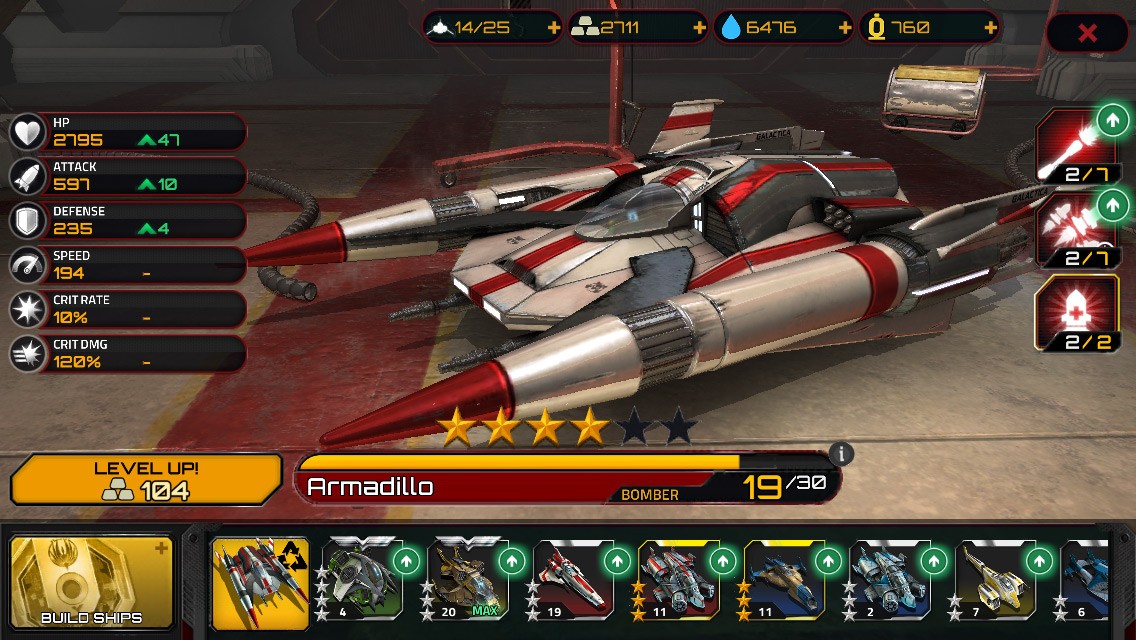 Although this results in a colorful hangar and a lot of different ships to unlock and explore, BSG Squadrons still ultimately comes down to: use your most powerful fighters. Once I unlocked a three-star gold ship, it never left my roster, despite the color of it or its opponents. I will occasionally swap in my Omicron Raptor because of its Elite ability to remove debuffs, but most battles are over so quickly it doesn’t matter if my ships are draining health or have reduced attack power. Since the game thankfully repairs any ships damaged or destroyed after a victory, there’s no danger in attacking without abandon and sacrificing low-level ships if needed.

Speaking of low-level ships: be prepared to see them, a lot. BSG Squadrons is still a collectible character game at its core, and ships are earned by opening Fleet Packs which contain varying ranks of ship blueprints. I’ve opened 42 packs while playing thus far and have earned a total of three gold-star ships. Gold is powerful for the campaign on Easy mode, but is still only the third strongest level out of five. The amount of useless bronze ships I’ve won and recycled is painfully high. 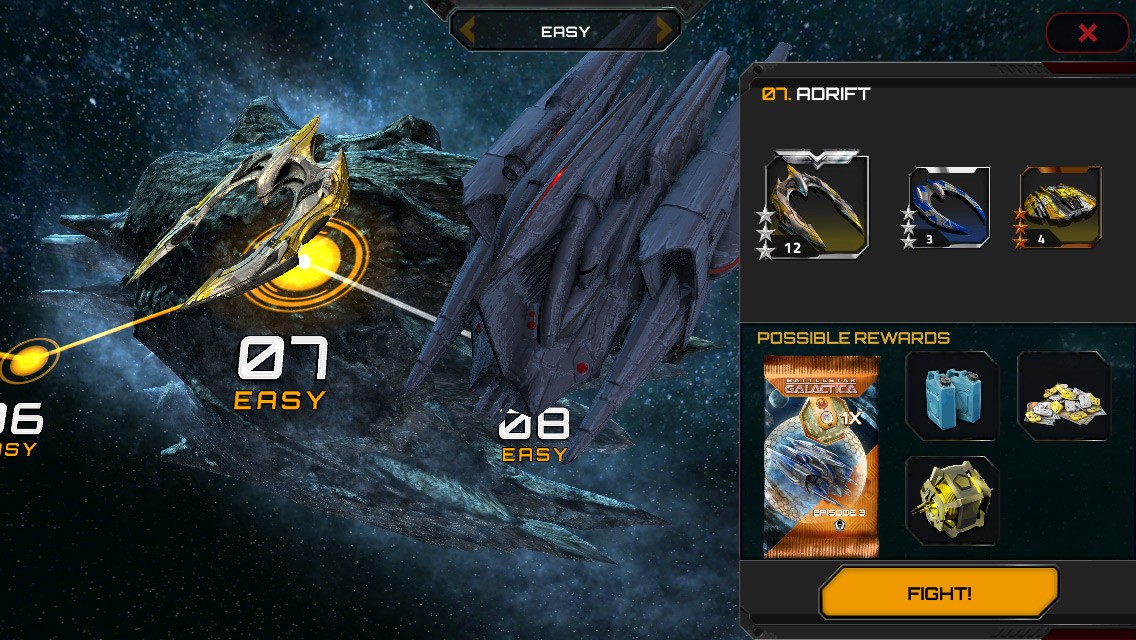 Those ships are your main focus for improvement, but there are plenty of other items and currencies to earn. BSG Squadrons has so many currencies that it’s a bit overwhelming at times: Tylium makes up the energy meter that allows you to engage in fights; Water is used to build or upgrade ships; Metal levels up ships; Cubits repair them after a lost battle; Tech—of the weapons, engine, Cylon, gamma, and a half dozen other varieties—is used for specific upgrades; and Population is your overall score and affects the type of Fleet Pack you’ll earn as your daily reward. That Population is improved as you add ships to your fleet—and yes, they are ships from the show, like Cloud Nine and Colonial One—which appear in orbit near Galactica when discovered, a nice little detail that adds a hint of sim-building to the experience. Some ships also come with their own abilities, like being able to purchase items from the market ship, Celestra. 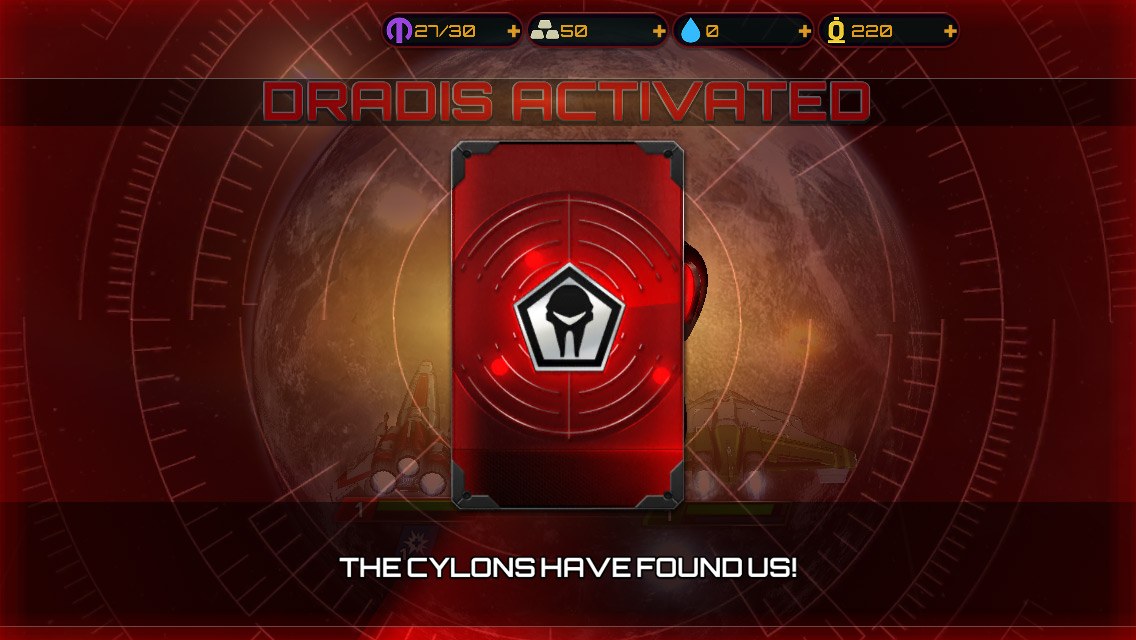 All those currencies and little ship details may distract from the fact that BSG Squadrons still comes down to two main things: upgrade ships and fight Cylons. Even in special “Dradis” battles when the Cylons attack in full force, fights play out exactly the same and the strongest ship ultimately wins. There’s currently very little variety in the gameplay and I wonder how the game will explain its nonstop fights in future stages: as of “Episode Five” in the game (out of 12 total), we’re still progressing through Season One when the main goal was to escape the relentlessly pursuing Cylons and fight back when necessary.

Before the global launch, I would like to see more variation in the between-story events, as we saw in Star Trek: Wrath of Gems. That game uses slightly different match-three boards for ship battles, planetary landings, and personal negotiations, which allows it more paths through its storytelling. Currently, BSG Squadrons is basically: “The Cylons are chasing us. Oh no, Cylon attack! We’re low on water. Cylon attack! Gauis is sketchy. Cylon attack!” If the game gets to Season Three and is still sending us on the exact same Viper vs. Raider dogfights between every plot point, we might just break off from the fleet. But for now, we’re still enjoying the story and the quick battle system enough that we’ll stay in formation and see where this journey takes us.