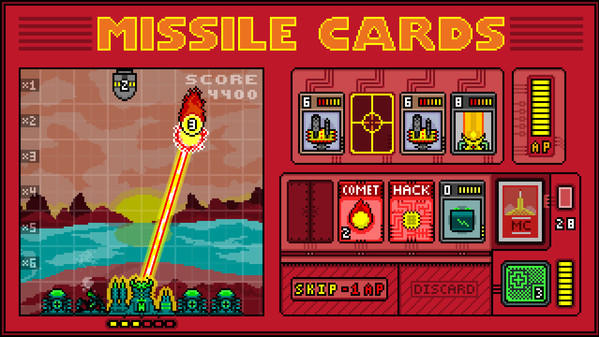 Missile Cards is the second game release by Nathan Meunier, the games writer turned freelancing guru turned video game developer. His first title, This Book is a Dungeon, was an interactive fiction dungeon crawler filled with nightmarish creations that wanted to kill you, always.

Missile Cards shares this penchant for death, but the murderer is space itself, raining nuclear warheads, comets, and tons of other gravity-fed balls of destruction down on the defenseless Earth. Defenseless, at least, until you show up.

A combination of Missile Command and Solitaire, Missile Cards pits players against impending doom in a turn-based, card-laying strategy game in which your defenses are controlled by the cards you play. Your deck is loaded with counter-lasers, shields, repair drones, and other tools that will allow you to fend off the sky onslaught and earn higher scores and EXP to upgrade your defenses. While the gameplay is fairly straightforward, survival is not: death is imminent and survivability only increases with practice and improved decks. This lends itself to replayability, though, with quick losses and engaging gameplay leading to one more try.

Despite positive reviews on Steam, Meunier has openly admitted that Missile Cards did not sell particularly well there. However, many players have specifically requested the opportunity to play on mobile, which lead Meunier to rewrite the game for iOS in the short time since the April PC launch. It seems like a perfect fit for the portable market with simple, short-burst gameplay that rewards return play and a variety of strategies. Meunier himself comments in his iOS devlog video that card games often feel better on mobile thanks to the “natural fit for the tactile…mobile experience,” praising other mobile card games like Card Crawl and the upcoming Miracle Merchant as some of his personal favorites.

We’d been holding out hope for a Missile Cards mobile release since it was first announced, so we can’t wait to try it on the go ourselves. Missile Cards will launch as a universal app on iOS on June 28th.