Alone in the Park Preview 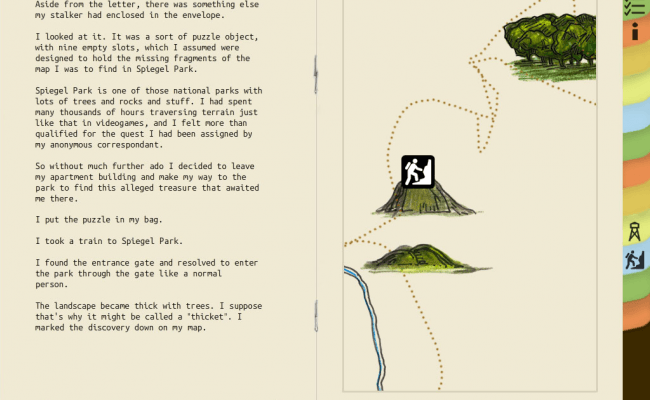 This treasure had better be legendary!

Sometimes the world seems like it’s moving too fast for me. I often find days where I’d like nothing more than to just turn off my phone for an hour, and go sit by myself in the park with something good to read. Ironically, the only thing I really want to be reading right now is an upcoming narrative-based adventure game called Alone in the Park.

The basic premise of Alone in the Park is simple: the unnamed player-character and narrator receives a mysterious letter from her stalker one day. The letter indicates that a treasure map has been split up into nine different pieces and strewn about a nearby National Park; and finding all of the pieces and reassembling the map will lead the narrator to an undisclosed reward. The “rather misanthropic” narrator begrudgingly embarks upon this winding quest throughout the park in a fantastic mix of text and graphical-based adventure gameplay. I recently had a chance to play an early preview build of Alone in the Park on my iPad, before the full game is released for iPad, PC, Mac and Linux on June 15. 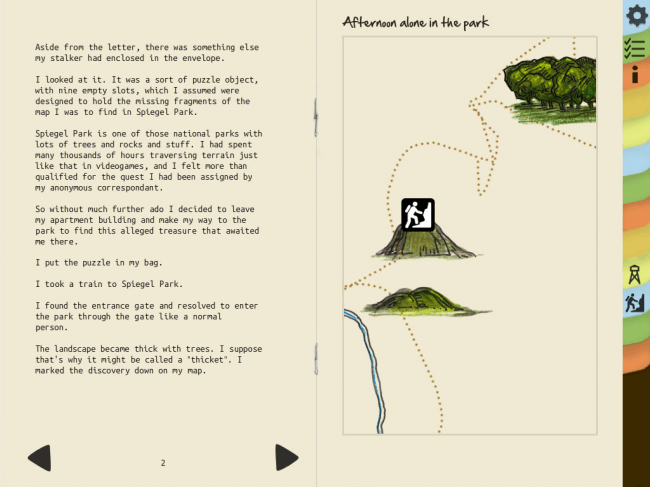 There are two main components to Alone in the Park: reading the game’s story, and surveying the park with some light adventuring puzzles thrown in. The story unfolds with every action you complete in the game, whether that’s in passing by an insignificant hill, or solving an intricate series of adventure puzzles. The map starts out as a completely blank canvas, and your path is gradually drawn as you wander through the landscape by holding your finger down on the screen. In both cases, it is an absolute joy in watching both the narrative story on the left side of your screen, and the hand-drawn map on the right slowly begin to materialize out of thin air, until you have pages upon pages of your storybook adventure to flip through, and every inch of your map is covered in wandering footprints and discovered landmarks like streams, hills and trees.

The writing in Alone in the Park is some of the sharpest I’ve ever had the pleasure of reading in a video game, and the narrator’s dark and cynically adult outlook of her surroundings provides some thought-provoking and shockingly humorous moments at all the right times. The entire story was penned by the same witty writer of Buddha Finger, and if this were simply just a novel, I would have bought it in a heartbeat; but the fact that there’s an entire adventure game attached to it is just icing on the cake. 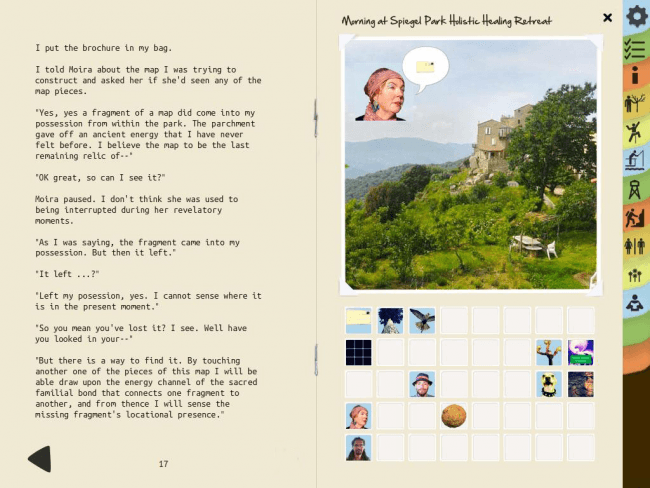 One of my favorite interactions so far in the game happens when the narrator encounters a little girl in the park who happens to be guarding one of the nine fragmented pieces of the treasure map. But of course, instead of just giving you the piece, the little girl tasks you with finding the missing glass eyes that fell off of her teddy bear (which just so happens to have 14 eyes in all, by the way). Faced with this dilemma, the narrator sardonically muses to herself, “It’s tough being an adult; if I had been a kid I could have quite safely beaten the crap out of her to get the map fragment without too many inconvenient legal consequences.”

This is just a small example of the sharp and deliciously dark writing that permeates the game, and I was completely hooked on every word the entire time I was playing (or should I say, reading). So the next time life starts to get a little hectic again, you can be sure to find me curled up against a tree in the park with Alone in the Park. And hey, maybe I’ll even stumble upon a treasure map piece or two!

Dragons of Atlantis: Heirs of the Dragon Preview