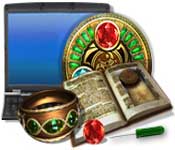 Alawar Entertainment is hard at work on a new title called Alabama Smith in Escape from Pompeii and gave us a sneak peek. The game looks like it’s shaping up to be a pretty interesting hidden object / adventure game in the style of Azada, Dream Chronicles and Escape the Museum.

The title character, Alabama Smith, is a young archaeology student who gets the opportunity of a lifetime when he’s sent to Italy to study with the renowned Professor Fairchild. Eventually, a story emerges that has Alabama searching modern-day Pompeii for an amulet that allows people to travel through time. He’s joined in his search by Professor Fairchild’s beautiful daughter, Anastasia.

During the first half of the game, you’ll solve room-based puzzles in order to discover clues that lead to the location of the amulet. The demo that Alawar showed us contained both straight-up hidden object challenges (like finding eight slide fragments in a scene) to more sophisticated puzzles that involve clicking on objects to add them to your inventory and then using them elsewhere in the scene.

In one scene, for example – a study – we had to find a key to unlock a desk drawer, then grab the feather duster and use it to clear cobwebs off a bookshelf to find a specific book, which revealed a clue about what to do next. The game offers hints about what to focus on in a scene, with phrases like "repair the chair," and "open the desk."

In the second half of the game, you’ll play as Anastasia as she travels between past and present to save Alabama before Mount Vesuvius erupts. According to Alawar, some of the locations you’ll get to see include secret passages, ancient ruins and a Roman prison.

Alabama Smith in Escape from Pompeii is scheduled to launch in December.