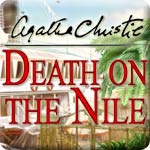 Agatha Christie Death on the Nile has been released. Read our review and download the game. Stomped? Check out our Tips & Tricks.

One of Agatha Christie’s most beloved mysteries will soon be an interactive adventure thanks to Oberon’s Agatha Christie Death on the Nile, a new casual game that combines the thrill of a murder mystery with the challenge of a "hidden object" game.

In case you never read this timeless classic, the story surrounds detective Poirot, who is vacationing on a luxury cruise liner, S.S. Karnak, and meets the wealthy and beautiful Linnet Doyle, and her new husband, Simon. But when Linnet is found murdered the next day, Poirot vows to reveal the killer by examining clues in two dozen of the ship’s rooms and interrogating many of the passengers. In true Christie fashion, many of the suspects each have a motive for the killing. Was it her jealous former fiance? A betrayed maid? A vengeful lawsuit defendant? It’s your job as Poirot to find the killer before the cruise liner reaches port.

The backstory to the whodunit is told via entertaining animated sequences, followed by the "seek and find" game-play. Similar to other "hidden object" games, players will be presented with a scene littered with dozens of items, such as a suspect’s messy room, and you’ll be asked to find a number of well-hidden objects – such as two pens, a statue, jewels or a newspaper — before the timer runs out. The items are listed on the left-hand side of the screen and will be crossed off as soon as you can click on it. You can click the Hint button to help if you need it, but you only have a few to use up. If you click on incorrect items too many times you will be penalized by removing some time off the clock.

Some items are hard to find, so you might need to click to open a book and reveal the contents inside. Or you’ll need to wait for a cuckoo bird to spring out of a clock, which is holding the item you need. In another scene, you must pick up a numbered ball on the ground and place it in a jar with other numbered balls — but this can only be solved by analyzing the number sequence and clicking on the correct ball to go in the jar.

And unlike other games of this kind, you can also uncover clues and evidence directly tied to the story, such as an empty jewelry box, broken heart-shaped charm, itinerary of the newlyweds or 12 pieces of a torn letter you can put together to read after you find all the pieces. Another kind of these mini-game bonus rounds is a sliding tile puzzle, which reveals some information after you correctly pieces into its correct spot.

Then, when you’re ready to challenge the ship’s passengers on their motives, you can click on the Salon to interrogate them. This is achieved by asking tough questions listed on the screen and analyzing their answers. In total, there are 14 unique suspect interrogation sequences.

The addition of great characters and a thrilling story, not to mention mini-games and interrogation scenes, all adds a wonderful new layer to the fun "hide and seek" game-play found in other games. Expect Agatha Christie Death on the Nile to be a huge hit for literary lovers and "hidden object" game fans alike.

Out of Your Mind Preview