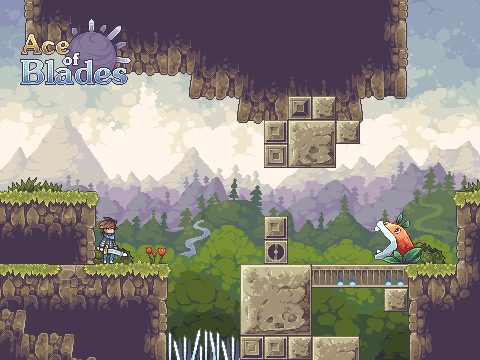 Ace of Blades, the spiritual successor to Spell Sword, takes you out of the battle arena and places you in a wide world.

The iOS game library is filled with survival games. That makes sense, since most of us wouldn’t be able to survive without our smartphones (*rimshot*). One of the most beloved titles in the genre is Spell Sword,an action-heavy survival game that challenges you to slash, slash, slash at endless enemy hordes (though the game also encourages copious magic use). Everplay, the studio behind Spell Sword, wants you to oil up your sword arm again for Ace of Blades, the iOS-based successor to Spell Sword.

Whereas Spell Sword is an arena action survival thunderdome, Ace of Blades is a traditional platformer. The story follows the game’s hero as he sets off on a quest to become the Ace of Blades and win a set of Ginsu knives. Okay, no Ginsu knives. But the title “Ace of Blades” still carries a great deal of prestige.

To become the Ace of Blades, you need to explore multiple worlds and locate special blades that have powers locked in them, not unlike the spell cards from Spell Sword. The game also features lots of puzzle and RPG elements, so swinging your sword at enemies like so many mobile hunks of meat won’t always get you where you need to go. And like its predecessor, Ace of Blades should delight you with its pixel-based graphics, warped sense of humor, and (hope beyond hope) an awesome retro soundtrack.

Ace of Blades is projected to hit the App Store in late December.