By Harry Slater | 2 weeks ago 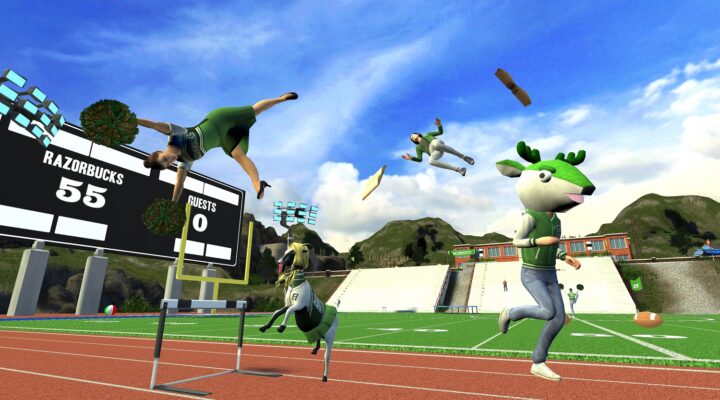 For the past couple of years we’ve been keeping a regularly updated list of every new game that lands on Apple Arcade. It was getting a bit long and unwieldy, so we’re starting a new list for 2022.

You can still read our list of every Apple Arcade game of 2021 and 2020 by clicking here, but we’ll be continuing to update this new version as the year goes on. We’ll share our definitive opinion of every game that lands on Apple’s subscription service.

Make sure you check back regularly to see what we think of the latest titles landing on Apple Arcade. And now, here’s every Apple Arcade game of 2022 – played and rated.

Updated on May 16th

One of the silliest games ever makes its way onto Apple Arcade. You’re controlling a goat with a ridiculously long tongue, and your main goal is destruction. Prance through sandbox levels doing whatever ridiculous things your heart desires. It’s stupid, but it’s also charming and hilarious.

A brand new entry in the Badland series that’s packed with single and multiplayer modes. You can even play on the same device. The game looks gorgeous, it controls really well and it’s hard not to fall in love with it. You should definitely be giving this one a go.

One of the best puzzle games ever made finds a new home on Apple Arcade. At its simplest it’s a game about cutting parts of a tree so the rest can grow. But it’s about so much more than that. The zen atmosphere and simple gameplay are a beautiful salve against the rigors of modern life. Pick it up and fall in love.

A gorgeous cartoon mixture of a platformer and a puzzler with some gravity and physics thrown into the mix. It’s challenging in just the right ways, and there’s more than enough content to keep you playing for a good long while – and playing with a big smile on your face as well.

One of those niche games that you’re either going to absolutely adore or utterly ignore. Drive diggers, loaders and more, build roads and structures and generally live the life of a construction worker. If that sounds like your sort of thing, then have at it.

A big, shiny cue-game simulator that does everything you’d expect from a game with a name like that. It’s really well put together, there’s always a game waiting for you, and if you like pool or snooker you’re going to absolutely fall in love with this one.

A slick auto-runner featuring everyone’s favorite blue hedgehog. Run around, collect rings, unlock new characters and have a decent time doing it. It’s not the deepest game, and it’s been kicking around for a while, but it’s entertaining enough to put a grin on your face.

A brand new, AAA racing experience that sees you burning rubber through the picturesque scenery of Italy. There are loads of gorgeous cars to collect, you can join up with friends to cruise and race, and the whole thing looks amazing. It’s also nice to see a totally new game on Apple Arcade.

A gorgeous-looking build-’em-up that gives you a blank canvas to place your creations upon. There’s people-management and resource gathering, all to build to your heart’s content. It’s even better with the IAPs removed. Well worth checking out if you want a game that lets you make things.

Another Alto game gets some Apple Arcade spit-and-polish. This is a remastered version of the original, and it features a brand new character and 20 new goals that you can only complete once you’ve unlocked them. It’s every bit as smooth and dreamy as when it first came out, and it’s a great way to lose yourself in the mountains for a while.

A brilliant and often breathtaking adventure puzzler that sees you working your way through impossible worlds. There’s a story here about life, connection and the relationship between parents and their children, and it’s as essential now as it was when it was first released. Play it.

One of the best action platformers on mobile gets the Apple Arcade treatment. It’s all about stealth, short bursts of violence and picking your way through a series of tricky levels. And you get to play as a ninja. What’s better than that?

Gibbon: Beyond the Trees

A gorgeous, ecologically conscious game that sees you controlling a gibbon as it swings through the trees. There’s a real joy to the movement, an important message, and this one has pedigree too – it’s from the dev behind Eloh and Old Man’s Journey. Well worth checking out.

Fancy a magical farming adventure? Well that’s exactly what Wylde Flowers offers. It mixes some adventure and exploration into the cauldron, as well as spells and an excellent story. You’ll be growing crops and looking after animals too. It’s adorable in just the right ways.

The latest game in the main Bloons series gets the Apple Arcade treatment. If you like tower defense, monkeys or balloons, then you’re going to find a lot to like here. There are loads of modes, from co-op to single player, and a decent depth to proceedings too.

The original Bridge Constructor game makes the leap over to Apple Arcade. It’s all about putting up a bridge using limited materials and getting vehicles from A to B. You’ll also get the SlopeMania and Trains add-ons. It’s a solid, challenging physics puzzler that’s got a fair share of laughs to it as well.

Another slight revamp of a classic mobile game – this one won Apple’s Game of the Year award back in 2017. It’s basically a digital version of Where’s Waldo, but it’s dripping in charm, great ideas and more than a hefty dollop of good fun.

A big, giddy blast of arcade-style tennis fun. You’re whacking balls around as one of several characters from classic Nickelodeon toons. This is to tennis what Super Smash Bros. is to punching people in the face. It’s fast, it’s fun and there’s an awful lot to love.

One of the best survival games on mobile gets a release on Apple Arcade. It’s full of heart, charm, crafting and fighting. The sci-fi setting is brilliant, and there’s a massive world to explore and enjoy. If you’ve not played this before, now’s the perfect time.

2022 hasn’t exactly started out with a bang on Apple Arcade. So much so that we’ve decided to group the two games that HAVE come out together. They’re both digital representations of popular card games, they’re both really well put together, and if you like Hearts or Spades you’ll love them. Hopefully there’ll be something meatier on the way in the coming weeks, though.

The Best Upcoming Mobile Games in 2022

Now that we’ve finished our round up of the best games that came out for iOS, Android and Apple Arcade...