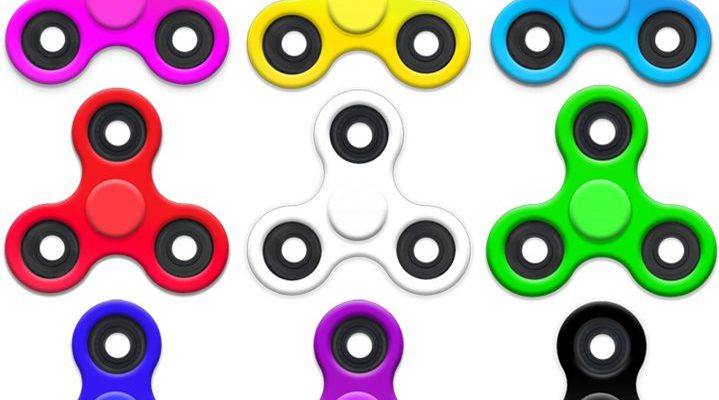 Unless you have no children, are never around other people’s children, and have been living under a rock that has no internet connection for at least six months, you already know what a fidget spinner is. Though they seem like a craze built for a simpler, pre-smartphone time, the simple rotating toys have caught on in the same manner as fads have always done, spread primarily through word of mouth.

Cannily, the (many) companies making them have stated that they’re more than just toys or gizmos, but aides to relieve stress or help people who have difficulty focusing be more present. And maybe they do. However, there is definitely a growing band of parents and teachers who rues the day they ever heard of a fidget spinner.

There might be a third way between fidget spinners everywhere and “let’s ban the darn things,” and like the solution to many inconveniences of modern life, it’s through mobile games and apps. Developers have been all too eager to crank out fidget spinner apps since it isn’t difficult to program stuff to go around in a circle like a top, plus they can frame them as cheaper than buying the physical toys. Also less dangerous.

With these apps proliferating as quickly as the actual spinners, it’s time to cut through the clutter and find the best ones, which is something we do pretty well here at Gamezebo. Of course we haven’t had time to try them all, especially all the ones on Android because we need to eat, sleep and spend time with our loved ones. But what we have done is sifted through the app store charts to find the apps other people seem to be digging the most so we can tell you the best fidget spinner apps out there and why people seem to be digging them.

Oh, and as a word to the wise, as lot of these apps are simply titled “Fidget Spinner,” especially in the wild world of Google Play, so we’ll include the developer in each capsule so you can tell them apart. 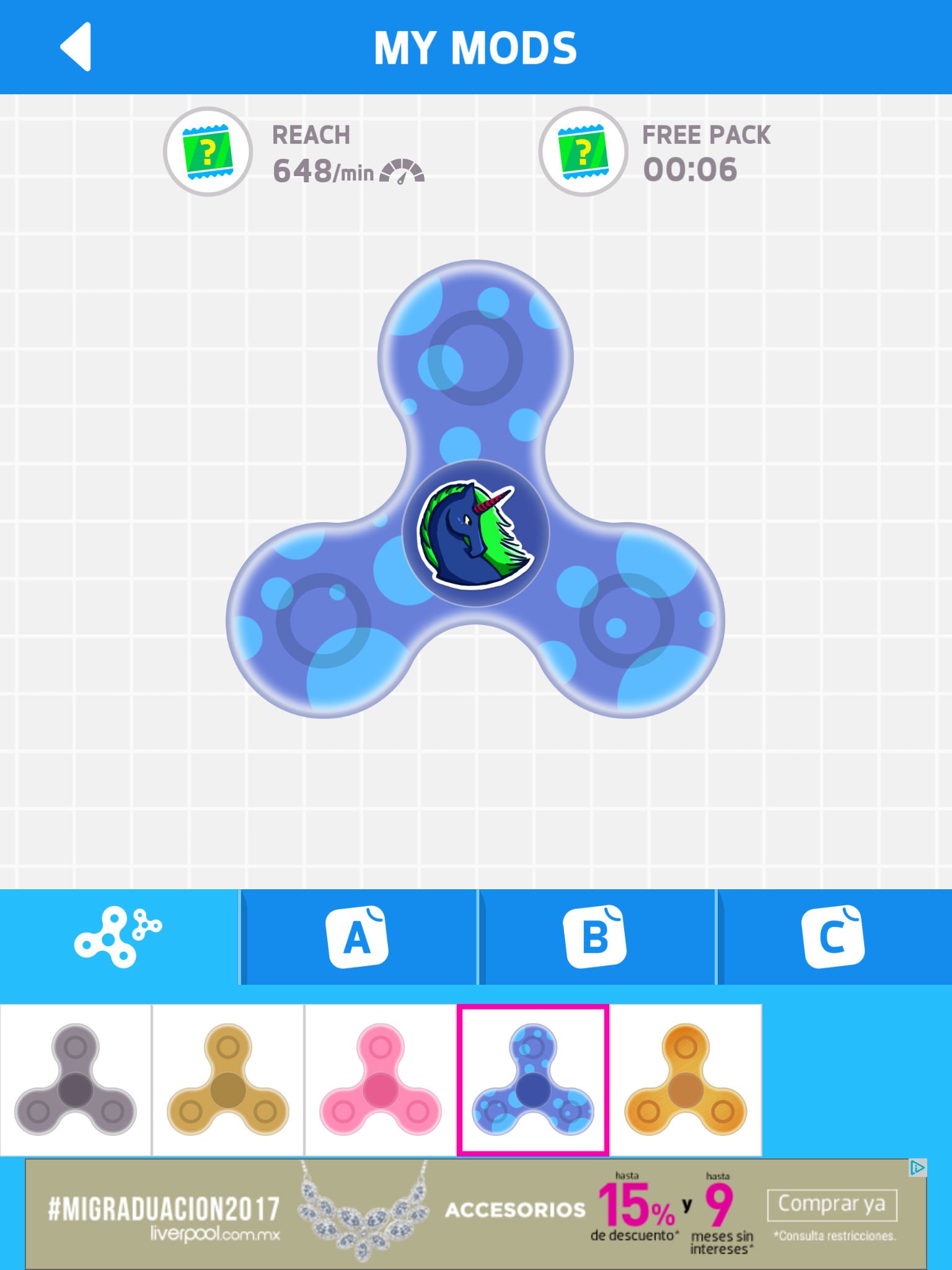 If there’s actually a thing that’s an “accept no substitutes” fidget spinner app, this is it. Making a simple mobile game is right in Ketchapp’s wheelhouse, after all, and this one was briefly the top iOS app in all the land. It absolutely belongs in the game category since there are points, coins and other expected trappings, and the gameplay, if you can call it that, is to see how many times you can rotate a spinner with five swipes. Spend coins to increases its stats and then spin again, ad nauseam. You can unlock many different spinners and even customize your own with decals and such, so if you can get your kids not to click on the many ads, this could be a hit in your household. 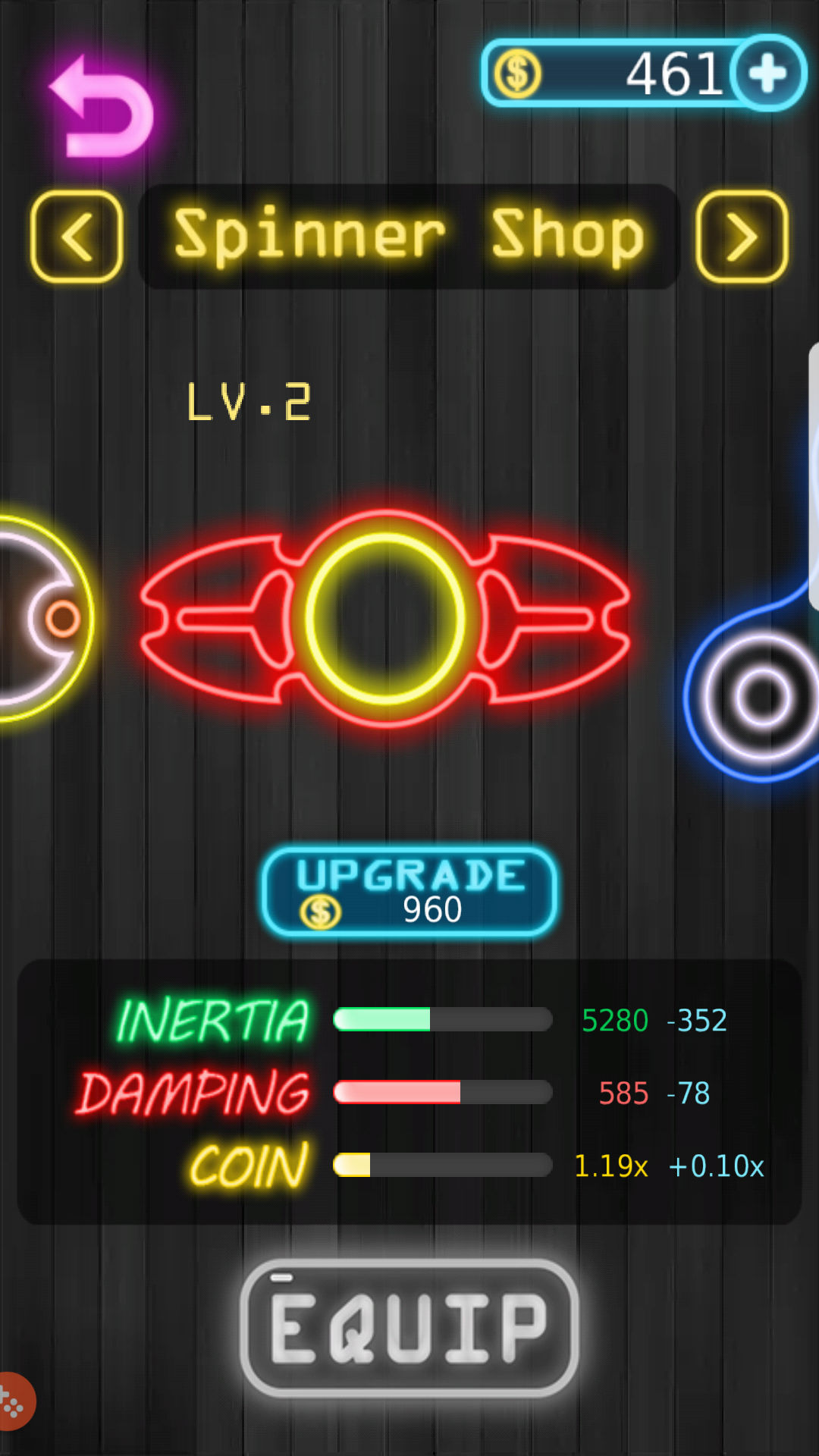 This one bills itself as “The No. 1 Free Fidget Spinner simulator on Android,” and at the time of this article, it’s actually correct, nosing out the Ketchapp game of the same name. The first thing that will smack you in the face about this app is its upbeat soundtrack, which you’ll either find energizing or annoying. It certainly has its own aesthetic, since it renders the spinners like they were old neon signs, which is admittedly cool. The gameplay is ever so slightly more involved than the Ketchapp game as there are multiple modes. The main one encourages you to spin as many times as you can in a given period of time. And then the usual unlocking and upgrading fun begins. 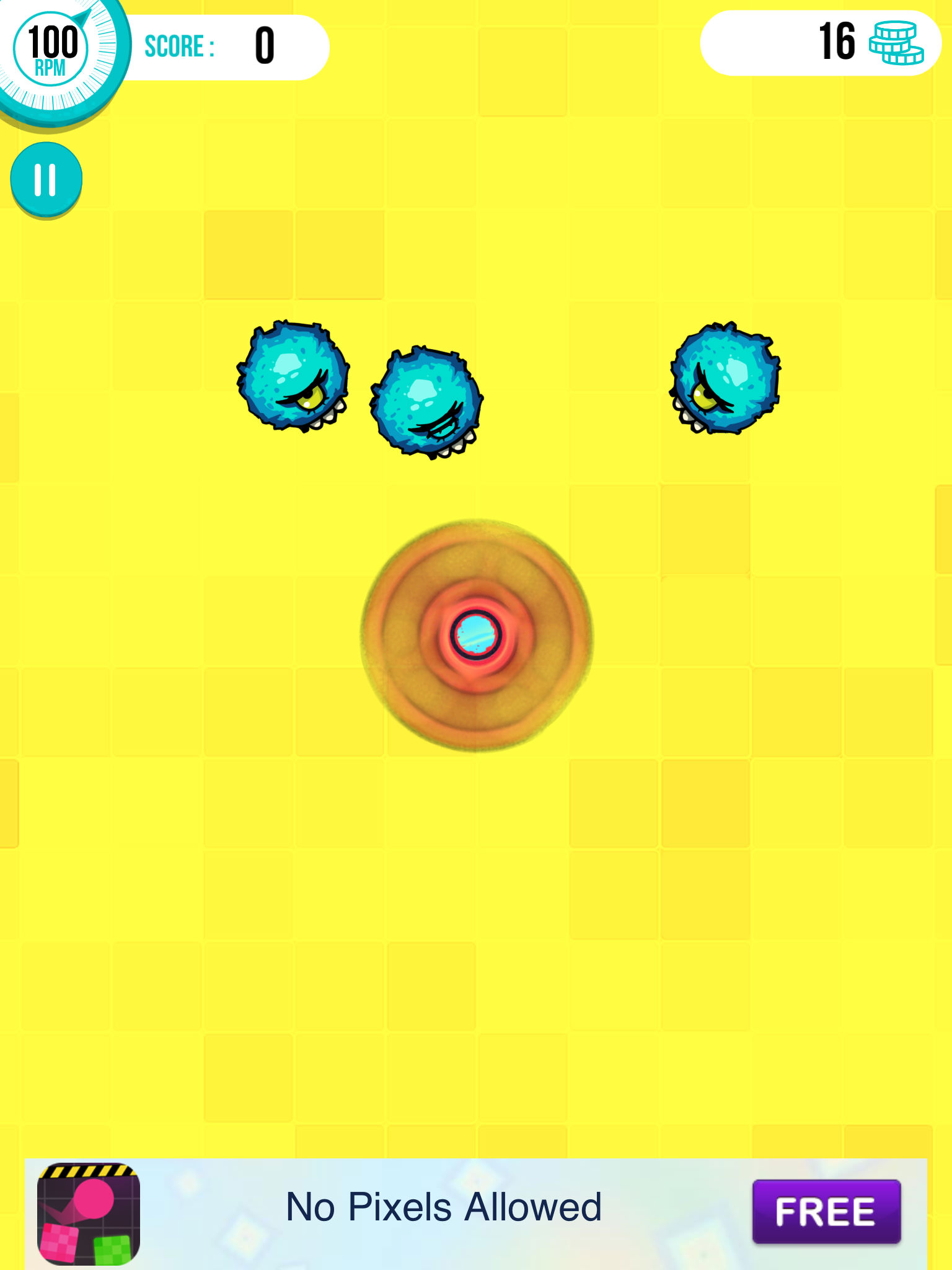 Maybe you’ve been searching for an app that isn’t simply called “Fidget Spinner” or wished that a spinner was good for more than … well, spinning. If so, this may be the app you seek. When monsters that look a little bit like some nasty stuff you’d see under an electron microscope are attacking then logically the only thing that can save the day is a spinner. Here you need to tap and hold down on the screen to keep the spinner going, sliding it to take out monsters and pick up currency and power-ups while avoiding attacks that slow your spinner down. Props to Crazy Labs for figuring out a way to make a bona fide game out of this craze; not as many props for filling it with arguably even more intrusive ads than the above apps. 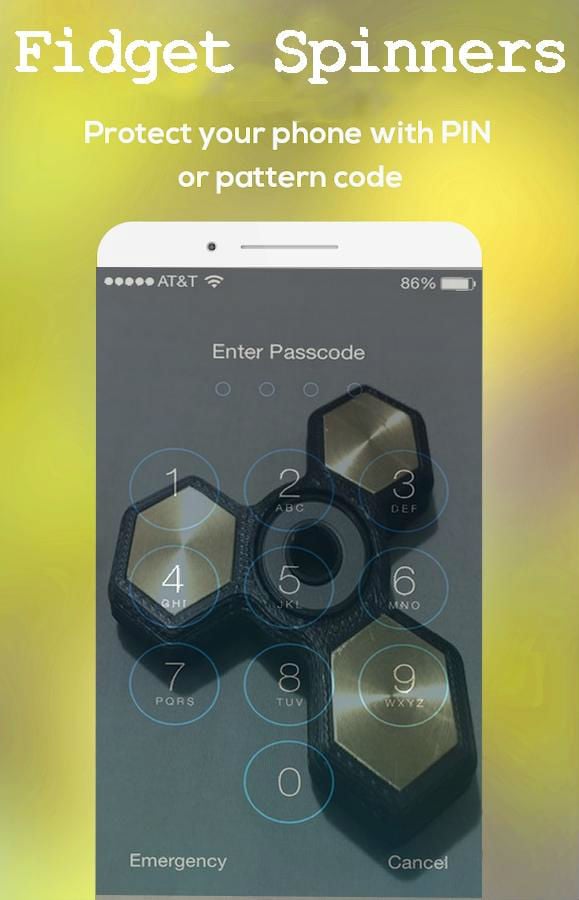 “What the heck Gamezebo, this isn’t even a game? Delete!” Just hear us out here, because this app is popular on Android right now and it’s something a little different from what we’ve already covered. As the name suggests, this app is simply a lock screen that enables you to have an extra layer of security for your phone by requiring a passcode to get to your main screen. But here’s the real genius: we’re pretty sure this was just a lock screen app that New World turned into a fidget spinner app by adding fidget spinner wallpapers and throwing two extra words in the title. That kind of chutzpah gets you rewarded by making our list. 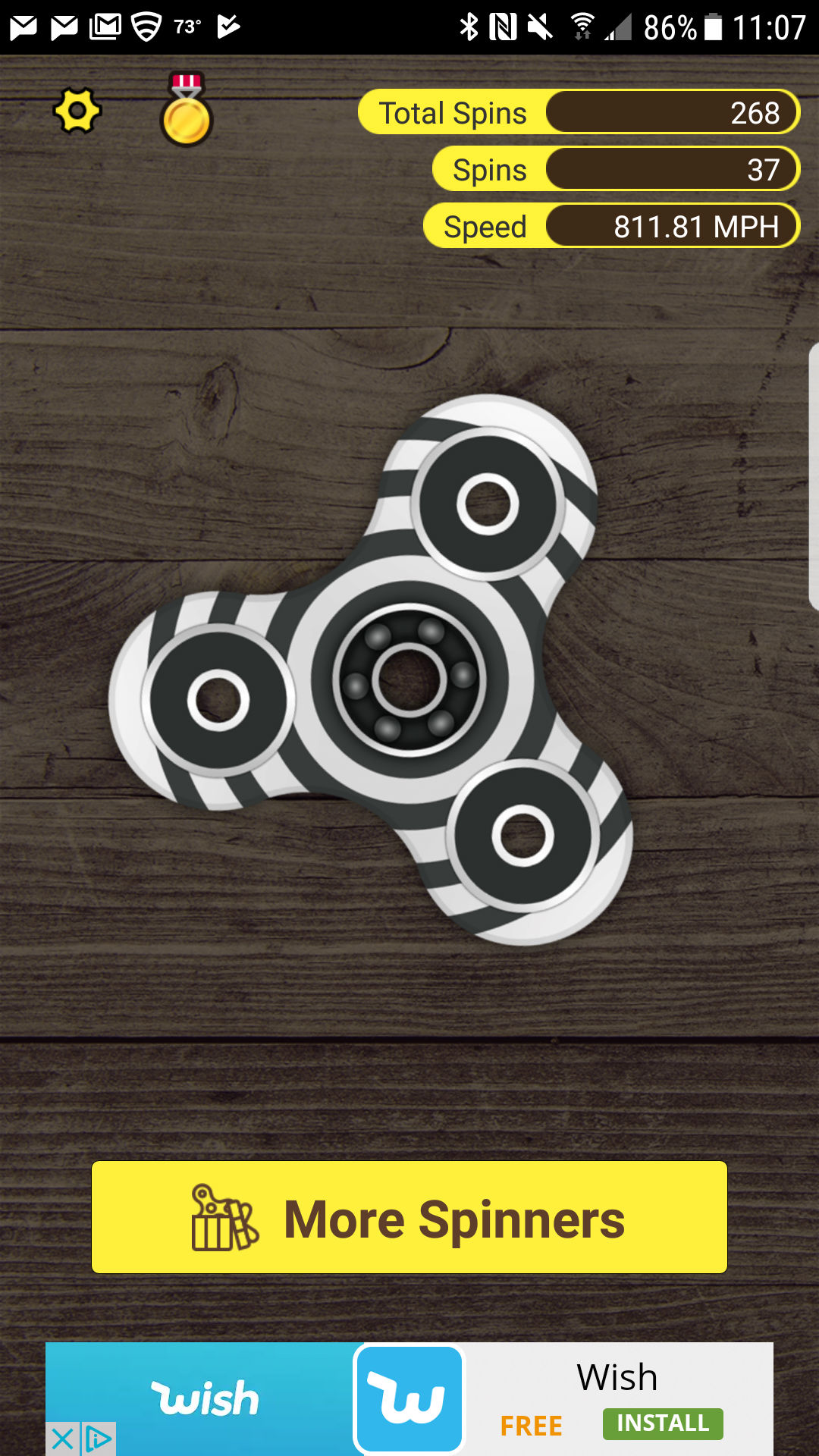 We end more or less where we started, with another mobile game that is mostly just about spinning things around repeatedly. Fidget Hand Spinner at least threw an extra word in its name, so there’s that. Snark aside, Fidget Hand Spinner is likely the closest of these games to the purpose of a fidget spinner in real life since you can keep the things going as long as you want, provided you don’t let them stop completely. It doesn’t take long to start unlocking some cool and different-looking spinners either. Ads are a factor, but that’s true of all of its competitors as well. The price you pay for free spinners, eh?

Should you ever pay for a fidget spinner app?

Hey, you read this far without your eyes glazing over, and you should be commended for that. Your kids must really be bugging you about fidget spinners. Anyway, it’s probably come to your attention that there are paid fidget spinner apps out there too. Should you ever buy one of these?

We’d say probably not. On Android, especially, there are just so many free ones there doesn’t seem to be a compelling reason to pay to download an app, particularly when none have really separated themselves from the crowd on the paid side. Yes, incessant pop-up ads are annoying and probably require you to tell your kids not to tap on them, but unless that factors into your decision above all else, free fidget spinner apps seem like the way to go.