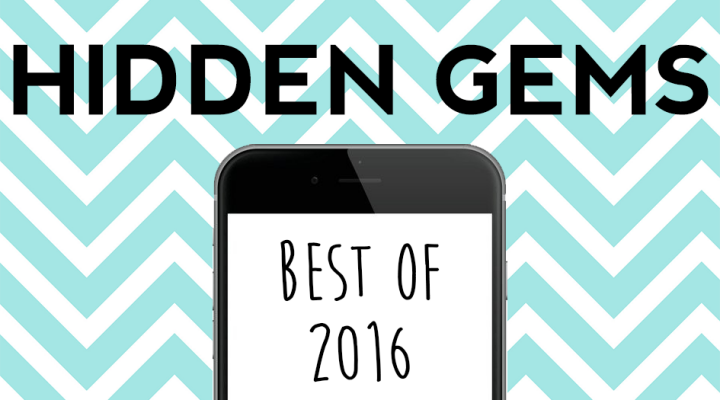 When it comes to year-in-review retrospectives, most people think about the biggest games that took up the most of their attention. And while we’re no exception when it comes to “Best of 2016” content, it’s also worth taking a moment to pause and think about all of the great games that flew under everybody’s radar this year. The hidden gems that we fell in love with; the games that kept us playing even if they never came close to charting as a top download. 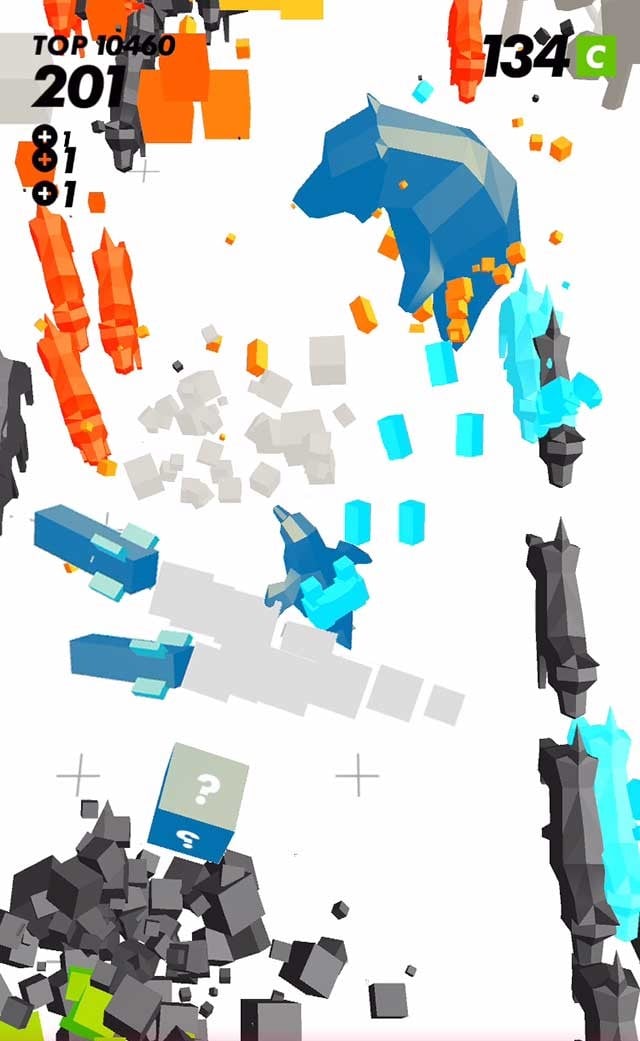 Time Locker is an endless bullet hell shooter lightly reminiscent of the FPS Superhot. It utilizes undetailed, geometric graphics that define characters and hazards by their color, size, and shape and a time-control mechanic wherein time only moves forward when your character is in motion. This means if you lift your finger, everything around you—enemies, bullet trails, explosions—immediately stops as well. This is a relatively simple idea that makes for an absolute blast of a game. While it allows for a slightly less manic shooter experience, since you can always stop moving to take a breather and reevaluate your next move, there are still moments of sheer exhilaration as you pause mid-barrage, dodge individual bullets, and have to rapidly slide up and down to break through barriers.

Although your obstacles start off simple—a waddle of penguins passing by, a lengthy snake to slip around—you’ll soon be facing off against military helicopters and giant blocks that cut off your path. The ever-present wall of pixels that is chasing you from behind at all times—even when “paused”—ensures you can’t utilize your time-stopping powers too much without repercussions. It’s amazing how much the time-stopping mechanic alongside the giant horizontal movement space really affect the way you have to play and adjust what you usually expect in this type of shooter. And the random weapon pick-ups, like the ice cannon and twin shot; giant bosses that chase you down; and unique characters with different shooting patterns ensure you’ll never have the same—fantastic—game twice.

The Battle of Polytopia 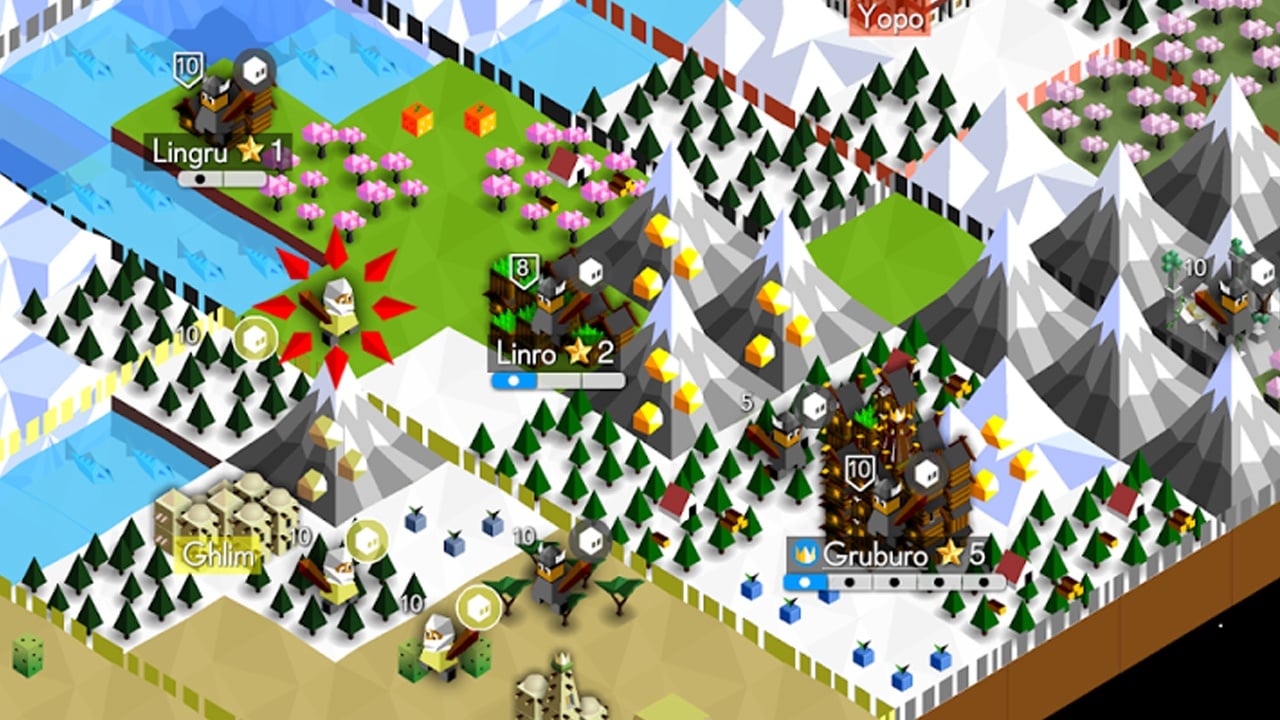 The Battle of Polytopia (formerly Super Tribes) offers the same strategic experience Civilization players have been enjoying for years, but properly pared down for mobile. While it’s certainly not the first strategy game to try to fill those shoes, it’s a perfect fit for the on-the-go medium with its short (30-turn max) games and fairly simple options. As soon as the game begins, you’ll be claiming new territory, crossing mountains, hunting for food, and expanding your quickly-growing empire.

Despite being easy to jump into and fairly quick to win, Polytopia still manages to give you a feeling of autonomy and choice through the fairly open world board and a surprisingly robust tech tree (that will help you accomplish some of those mountain-climbing and hunting-type goals), as well as in-game tasks or challenges. It also offers optional hints for the best moves on a specific turn to guide less experienced players to successful world domination, providing an outlet for strategy fans new and old. On top of all its gameplay appeal, The Battle of Polytopia is simply charming to play: the colorful world with its blocky characters and creatures, the heart bubble hints, the distant sounds of your enemies drawing closer—it all combines into a polished little package that’s hard to put down. 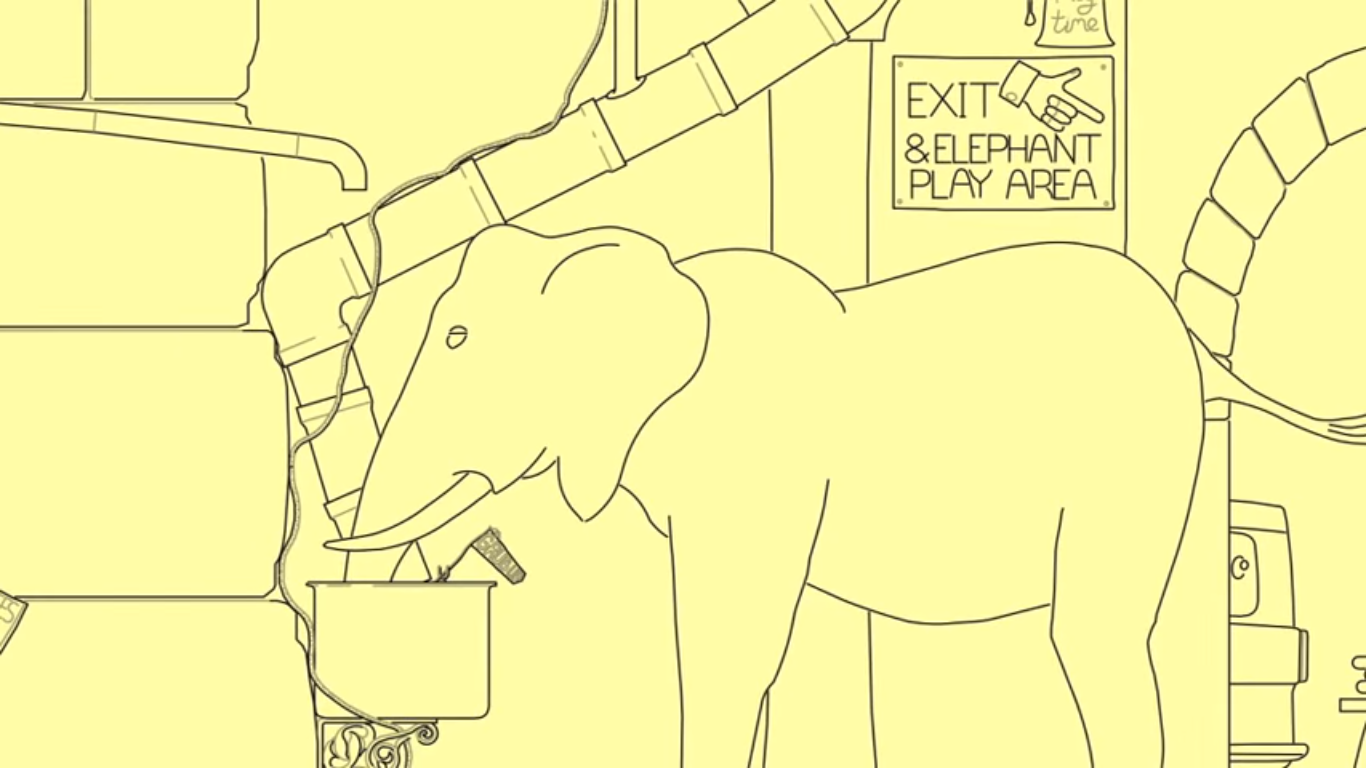 TraptionBakery is a gift for the curious. It’s a strange, surprising work of art that is as confusing as it is beautiful. If we had started playing it the day it launched, January 1st, we might have just about figured it out by now. But we didn’t, and so we haven’t. Yet we’re still fascinated by all the bits we don’t understand. It is, at its heart, a beautifully intricately drawn Rube Goldberg machine. Some of the contraption is made up of expected parts like wheels and levers, but these are intermixed with more confusing aspects like golf clubs, bathtubs, shoes, trombones, decapitated bodies, and a hungry elephant.

There is technically a goal to work toward, a purpose to the machine that can be fulfilled—baking bread—but the real joy is in simply examining all the bits and pieces, following pipes and lines to their destinations, playing around with the parts you can interact with, reading the notes, and trying to decipher what in the world is going on here. 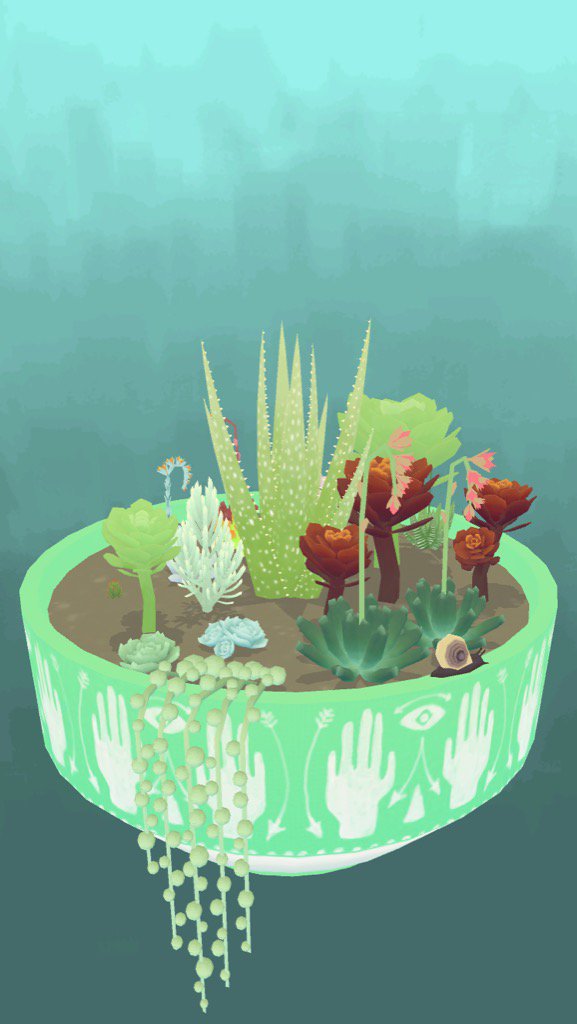 We technically wouldn’t call Viridi a “game” exactly, but it’s still an experience that we highly recommend. It is, quite simply, a succulent simulator, allowing users to plant and grow their own small plants in real time. The beauty of Viridi is in its focus and simplicity. There are no ads or energy timers, no water caps or plant visitation limits. The only purchases are for additional pots to allow you to grow more at one time or new seeds to expand your pot or swap out plants (but you earn a free seed every week). You merely check in on your plants when you feel like it, spritz them with water as needed, and enjoy looking at them. Sometimes a snail will come to visit.

It’s easy to become attached to your little plants as you name them, “sing” to them, protect them from weeds, and watch them grow from tiny buds to beautiful blossoms. It’s the perfect way for non-green-thumbs and anyone with limited growing space to still enjoy the fulfilling, zenlike experience of cultivating a living thing—even if it is only a digital, lovable potted plant. 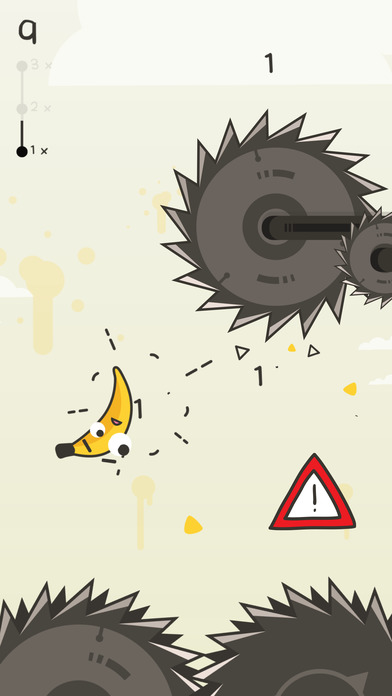 At first glance, Don’t Grind looks like a simple, one-tap dodger. And, technically, it is: it just happens to also be a dodger with painstakingly perfect controls that bleeds charm and bits of ground-up anthropomorphic household objects. Your eponymous goal seems simple enough—Don’t Grind—but in order to accomplish this you’ll have to avoid hitting permanent sawblades stationed at the bottom of the screen and an endless barrage of blades, anvils, missiles, and bombs that come flying at you from every direction. The beauty of Don’t Grind is that you have ridiculously minute control over your character’s every movement, jumping up slightly with soft taps and bounding higher with long holds; sliding left or right a tiny bit with delicate scrolling and to the edge of the screen with frantic swipes. Since the only way to earn points is by collecting stars that appear randomly around the screen, you’ll naturally master the seamless controls as you earn higher scores.

There’s also a character collecting component to encourage those of us who are less swayed by leaderboards, with 76 (after the recent Christmas update) adorable objects to unlock and subsequently grind to a pulp. Every item—from the starter “Narbana” to the secret “Bred Hotterer”—has a lovable expression and voice that reacts to every jump and near-death miss with a panicked eye-widening and shout of “Whoa!” From the characters to the lyrical background music to the perfect controls, Don’t Grind oozes charm, polish, and the occasional googly eye. 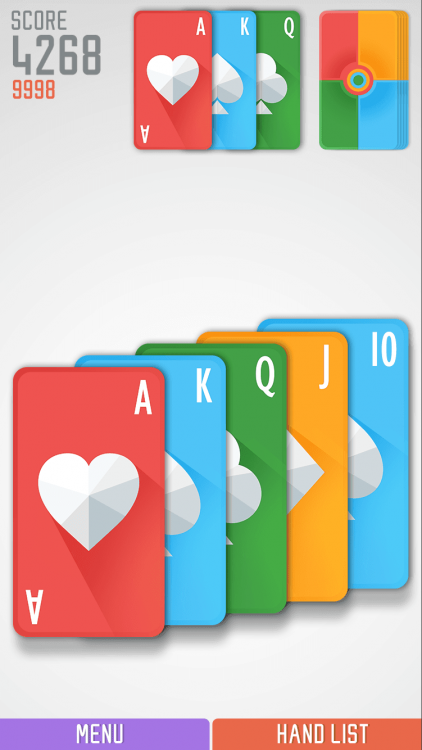 Honestly, most of Pine Entertainment’s games could be included in a “hidden gems” roundup. The small team is surprisingly prolific in the mobile space, having released 13 games on the App Store in 2016 alone, yet few of their titles have reached the level of popularity of their biggest hit, Century City. That’s not due to lack of quality or variety: their titles span nearly every genre and theme imaginable, from the beautifully minimalistic sliding number puzzle, numDance to the wacky gardening arcade challenge, Sloomy. Politaire itself is a combination of games, mixing solitaire and poker into a single experience that is initially reminiscent of Sage Solitaire but is ultimately its own unique take on the pair.

Players are tasked with clearing out their deck by making poker hands—such as three of a kind, straight, full house, etc.—within the five cards in front of them. Thanks to its use of three card solitaire, players will always be able to see if a poker hand is right around the corner, but not if a better hand is just beyond the turn. You might choose to trade two cards for the next two up and snag a three of a kind, but maybe the next two cards after that would have earned you a flush. There’s a delicate balance between wanting to clear the deck and wanting to make the highest value hands, and it takes both practice and luck to figure out when to swap and when to hold. Thankfully, playing Politaire is always enjoyable whether you’re up or down, thanks to its straightforward interface that makes trading cards a breeze and its crisp, colorful graphics that are simply lovely to look at. Politaire has been one of our go-to card games in 2016, and we expect that will be true for years to come. 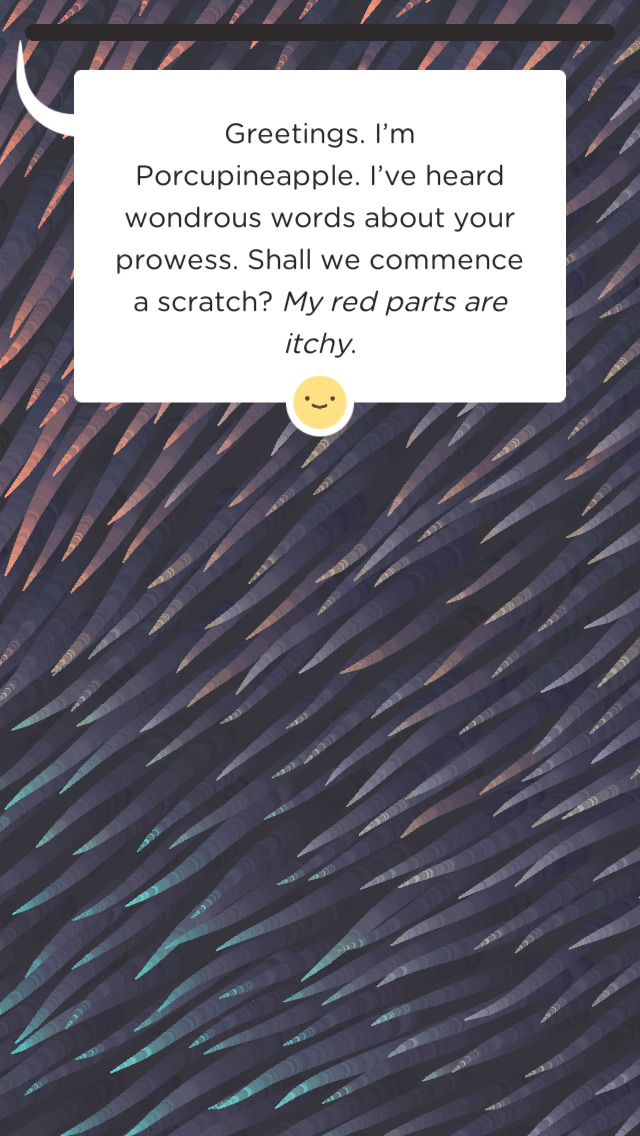 I Love Fur exists in the same realm as Viridi and TraptionBakery: it’s not quite a game per se, but an experience worth having. It is a collection of seven “pettables” that you can visit and, well, pet. Each pettable is represented by a swatch of fur that fills your device’s screen, as if you’re snuggling very close to the animal it’s attached to. Each creature has a unique type of fur, whether it’s spiny or fine, bumpy or smooth, which reacts differently to your touch.

The “goal” of the game is to pet each creature in the way it would prefer—a specific direction or styling its hair a certain way—to the point of befriending it. Doing so will let you pet it whenever and however you like, and the pettable will ask you questions or offer comments during your petting session. It’s one part pet simulator and one part tactile art project, and we love both parts equally. 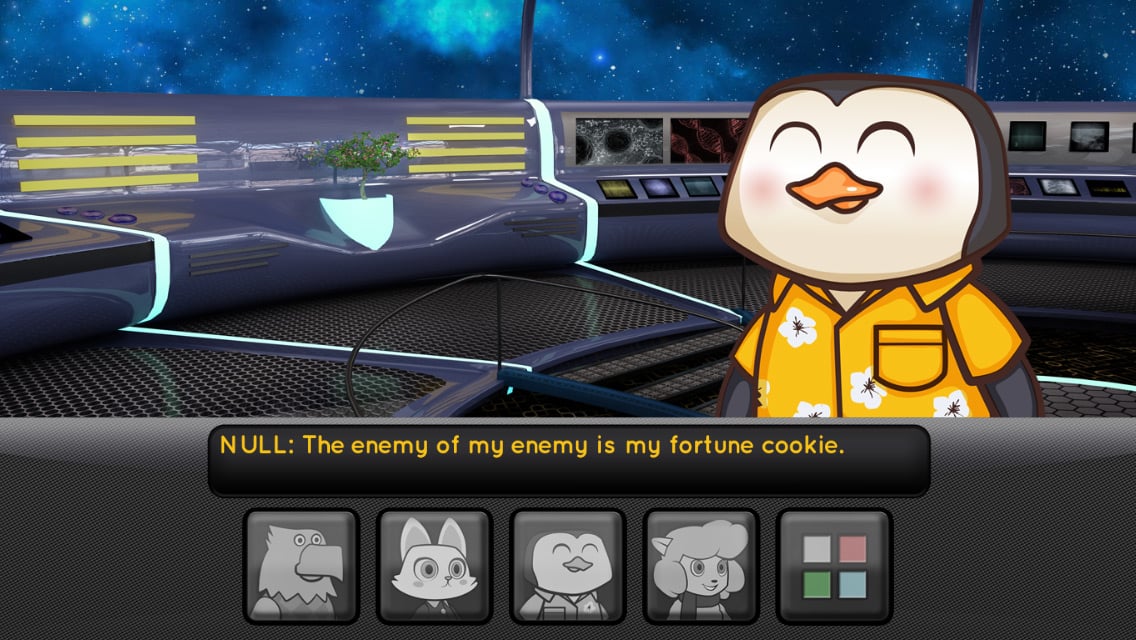 Star Billions could have easily made it onto our Hidden Gems list of 2015, if we had played it at its December launch. Luckily, the chapter-based spacefaring saga released its second episode in April of this year, so we get to include it as an absolute recommendation for 2016. Star Billions is an interactive fiction game in the vein of Lifeline, in which you’ll make choices for events and then wait a short period of time to see the outcome. The story centers around four AI crew members aboard an interstellar ship tasked with finding a new home for the human inhabitants they are transporting in stasis. Each crew member has a unique personality and purpose on board the ship: SARGE is the “Security and Arms Governance Expert,” and he usually recommends the most sound military decision; ROSIE is the “Repair and Optimization System Intelligence” officer and her primary directive is to keep the ship running smoothly; EIN is the “Experiment in Intelligence and Neural Networks” and is the closest thing to a pure computer AI available; and LACIE is the “Language and Communications Interface” who usually opts for diplomacy and talking things out if possible.

After each event—such as an attack on the ship or an unknown hailing signal—you’ll have to pick which of the four crew members will deal with the challenge at hand. The AI you select will change the dialogue and story points you’ll see, although the main plot always leads down one path. What really makes Star Billions stand out, in both Season 1 and 2, is its extremely charming, funny, and at times touching dialogue between the AI crew members, the other characters you encounter, their attempts to reach you, and their own internal monologues. The events they face are both ridiculous and harrowing, and Season 1 ended on a tear-jerking cliffhanger that made Season 2 a long-awaited treat when it arrived. We’ve played through both Seasons multiple times at this point, and like a favorite book with SARGE-eared pages, we intend to continue playing it long after it’s been committed to our happy memory.