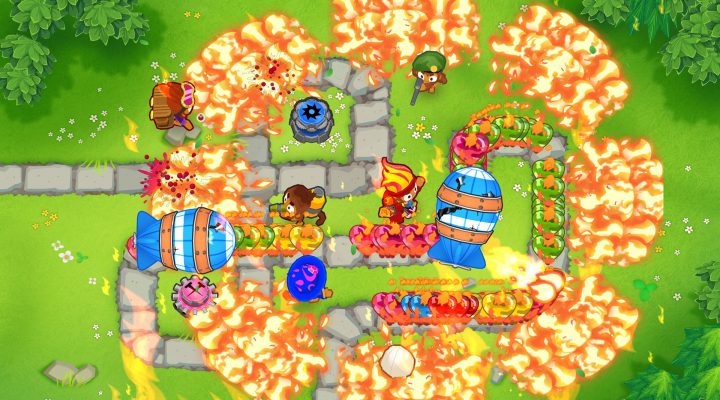 Whether you’re new to the genre or you’re looking to take your first steps into the world of tower defense you’re definitely going to find a game to fall in love with here. We’ve got fantasy games, we’ve got sci-fi games, we’ve got games with monkeys, we’ve got a game set on a tree.

Basically we’ve got something for everyone. So give the list a read and discover what we think are the ten best tower defense games for mobile in 2021.

Again, any of the Bloons games would fit nicely into this list. They’ve got everything you’d expect from a tower defense game, gorgeous graphics and loads of brilliant ideas too. There are loads of monkeys too, and as we all know monkeys make everything better with their cheeky attitude and fuzzy grins.

This one’s all bright neon lights and smart ideas. You’re not just building the towers, you’re building the path your enemies are going to take as well. There are more than 400 waves to try and take down and you’re going to enjoy blasting each and every one of them.

If you like the Kingdom Rush games, then you’re going to like Castle Creeps as well. It’s got a lot of the same ideas, but it throws in some fresh twists as well. If you’d rather add a sci-fi version, then Alien Creeps TD is well worth checking out as well.

OTTTD : Over The Top TD

This one does exactly what it says on the tin. It takes the tower defense genre and turns everything up to 11. There’s some brilliant design, plenty of enemies to blast into dust and a whole load more. If you’re looking for a tower defense game with meat on its bones and meat on its meat, then you should definitely check this one out.

This one adds a literal twist to the tower defense genre. You’re defending a tree, which means you’re defending against attackers coming in a 360 degree arc. It means you need to think in new and exciting ways, which is always a good thing.

The Fieldrunners series has never been big on new ideas, but if you fancy a classic TD experience that’s put together with love and care you’re definitely backing the right horse. This is the sort of game you’re going to lose hours of your life to.

Once again, all of the Anomaly games could fit on this list. This one is probably the epitome of them. Rather than building the towers, here you’re controlling tanks as they travel down their paths. It’s a brilliant idea, and in this version you can take on either role in multiplayer. Swish.

One of the classics of the TD genre. Zombies are encroaching on your garden and you need to use plants to fight them back. The cartoon graphics are some of the best you’re ever going to see, and you’d be hard pressed to find a game with more polish.

Dungeon Warfare 2 offers a really deep tower defense experience that digs into what makes the genre tick. There are plenty of ideas from other genres and they blend together to make something that’s going to make you think a lot harder than most of the other games on this list.