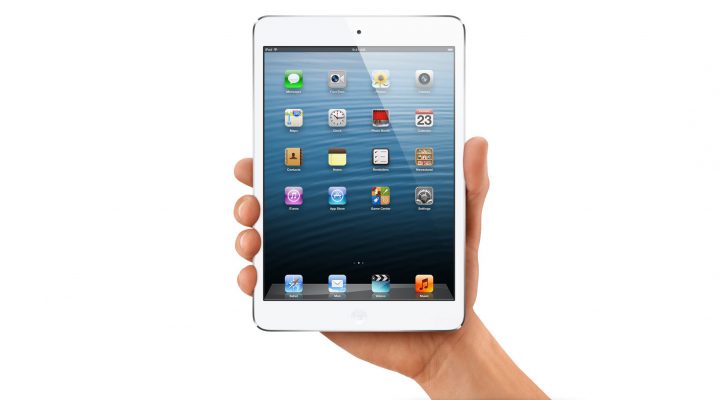 So you’ve finally upgraded from your tiny little iPhone to a great big iPad. Congratulations! But there’s a problem – you want to play the best games that your great big screen (or medium-sized screen if you’re on an iPad Mini) has to offer, but you don’t know where to start.

Never fear! We’ve mulled things over here at Gamezebo and put together a list of what we believe are the 10 best iPad games.

The App Store is always inundated with new content, so we’ll be sure to update this list whenever we feel something truly remarkable belongs on this best iPad games list. 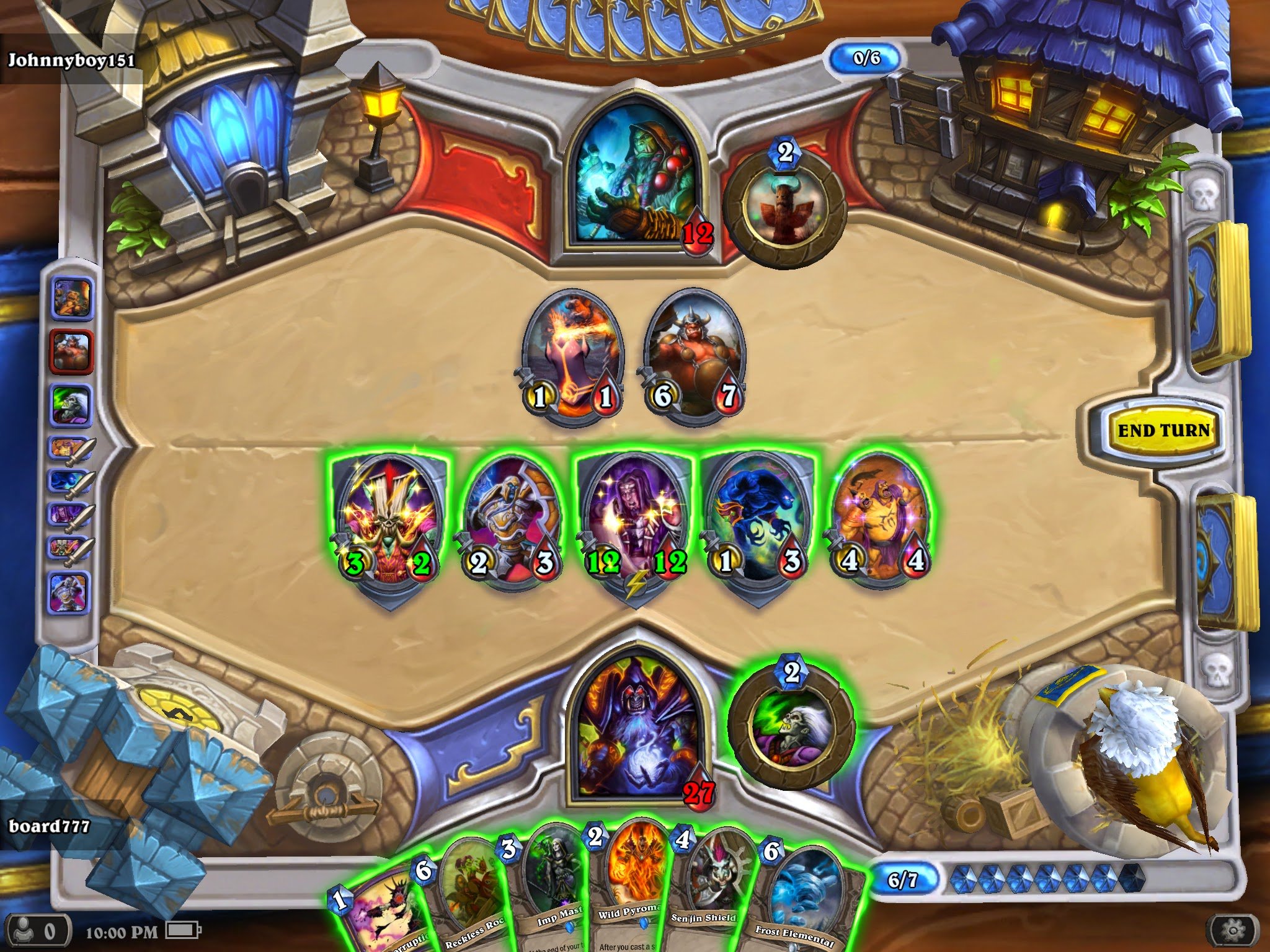 Who it’s For: Those who like the idea of Magic: The Gathering but find it too daunting. Strategy-minded gamers that thrive on competition.

Why We Like It: Hearthstone manages to check a lot of boxes that we love to see checked. A deep, strategic card game that’s also accessible and easy to learn? Check. A game focused on multiplayer competition that’s never short of opponents? Double check. A free-to-play game that doesn’t try to exploit or insult its players? Check there too.

Hearthstone is one of those rare games that’s everything you want it to be and nothing you don’t. Add in great card art, varying strategies, and the silly sense of humor that permeates the Warcraft franchise, and you have a recipe for one of the best card games on the App Store. 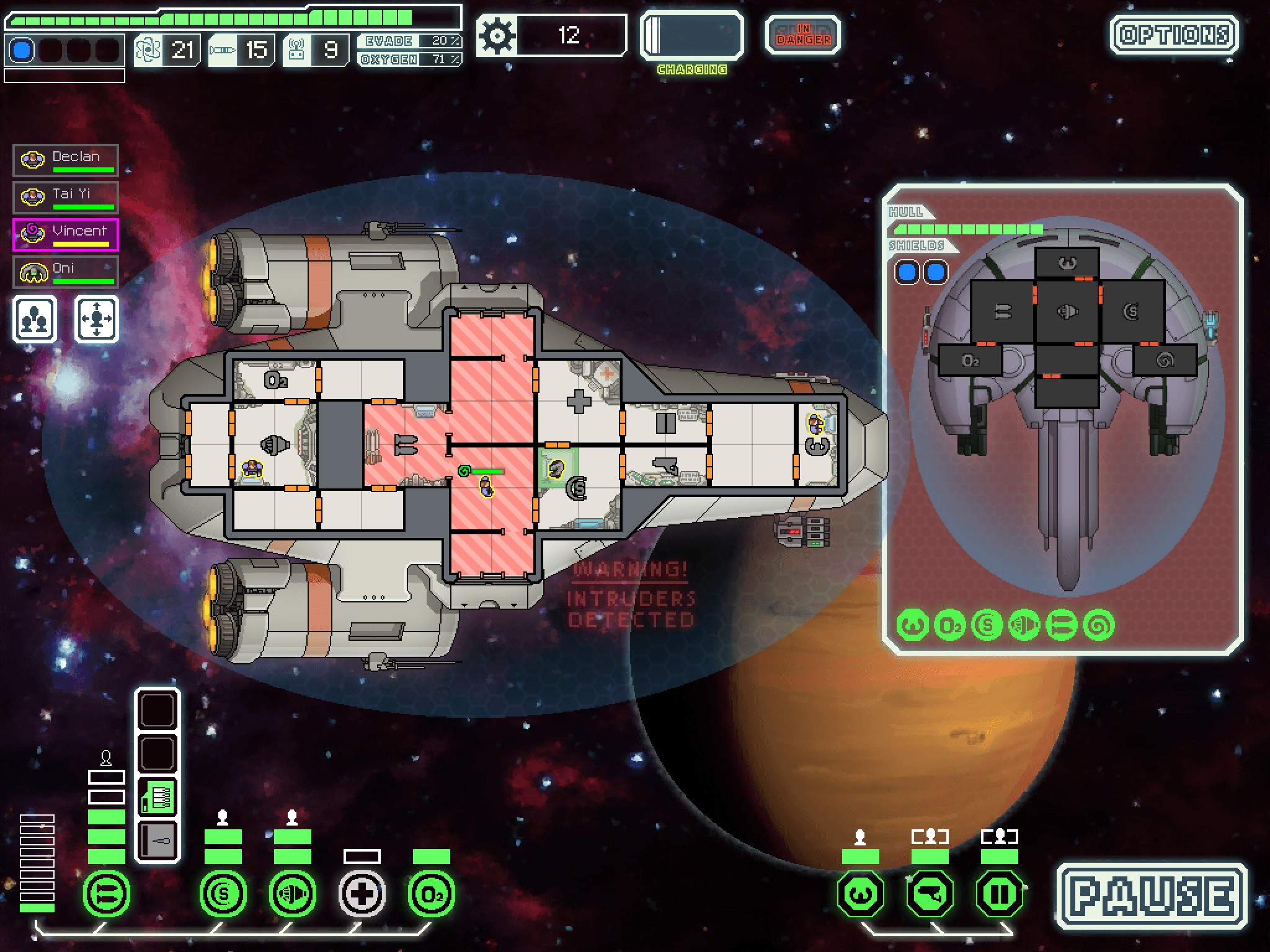 Who it’s For: Gamers who know it takes more than a William Shatner impersonation to be Captain Kirk.

Why We Like It: Have you ever wanted to captain your own starship? Me too. And while other games that try to recreate the experience have been pretty good (Out There, Star Command), there’s only one iPad space game that we’d readily call great: FTL: Faster Than Light.

Originally starting life as a hit indie PC game, FTL sees players exploring the cosmos in roguelike fashion. You’ll travel from planet to planet battling pirates, recruiting crew, and upgrading your ship for as long as you can… but once that last crew member gets blown out of the airlock, it’s back to square one.

That’s ok though – starting from scratch is half the fun. 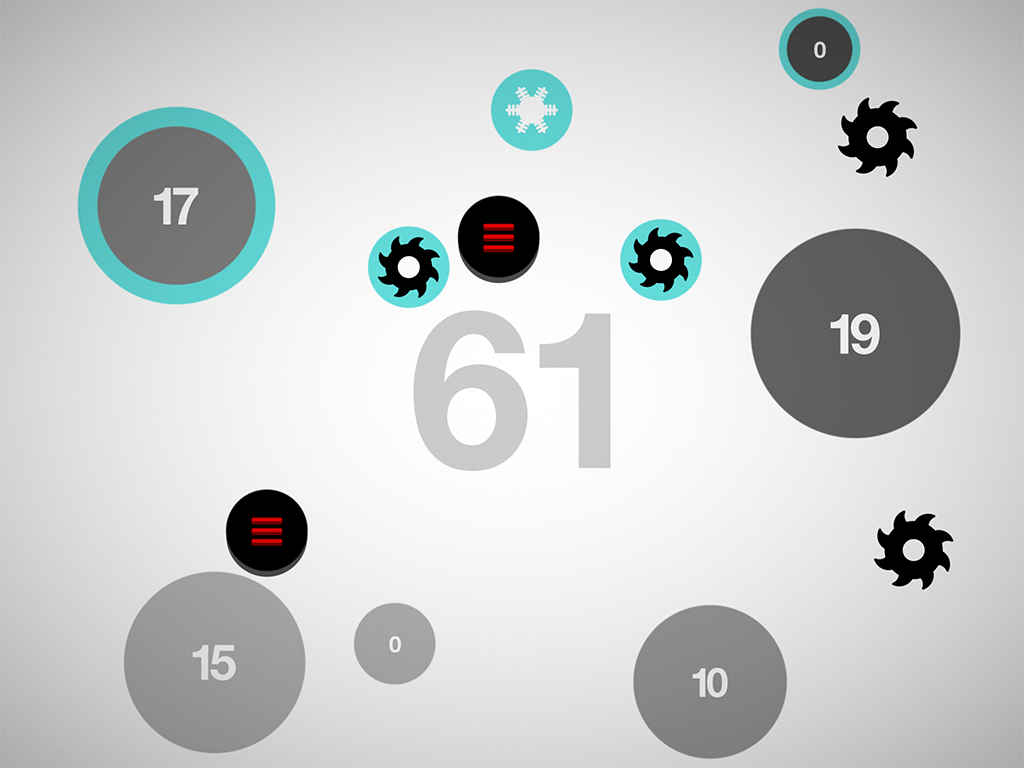 Who it’s For: Big fans of circles. People who like touching things.

Why We Like It: The games of Adam Saltsman are simple in theory, but brilliantly challenging in execution. If you’ve ever made it past 3000m in Canabalt, you know what I’m talking about. Hundreds is no different, challenging players to increasing the size of circles until their combined circumference reaches the magic number 100. The problem? Plenty of obstacles will get in the way, and you can’t let the circles touch while you’re growing them.

Who it’s For: RTS gamers looking for something fresh. Retired space station captains who want to relive their glory days.

Why We Like It: Contrary to what you might expect, real time strategy games haven’t really made a great transition to touch screen devices. With a mix of base-building and command-issuing, you’d think the genre was perfect for devices like the iPad. But despite years of attempts, only one RTS game has really wowed us: rymdkapsel.

The game’s minimalist graphics mirror its minimalist gameplay – and maybe that’s what makes it work so well. Players will build different rooms on a space station as they attempt to survive wave after wave of alien attack. You’ll assign different crew to different rooms, each providing different results. Can you squeeze out one more unit of food in the gardens to move to the kitchen before needing to man the guns and defend the base? Do you have enough time to explore an uncovered monolith before the next attack? Assigning tasks is easy; managing your time and making building choices is not. rymdkapsel is the kind of game that you can sit down to play for 45 minutes and end up missing every meal in the day. 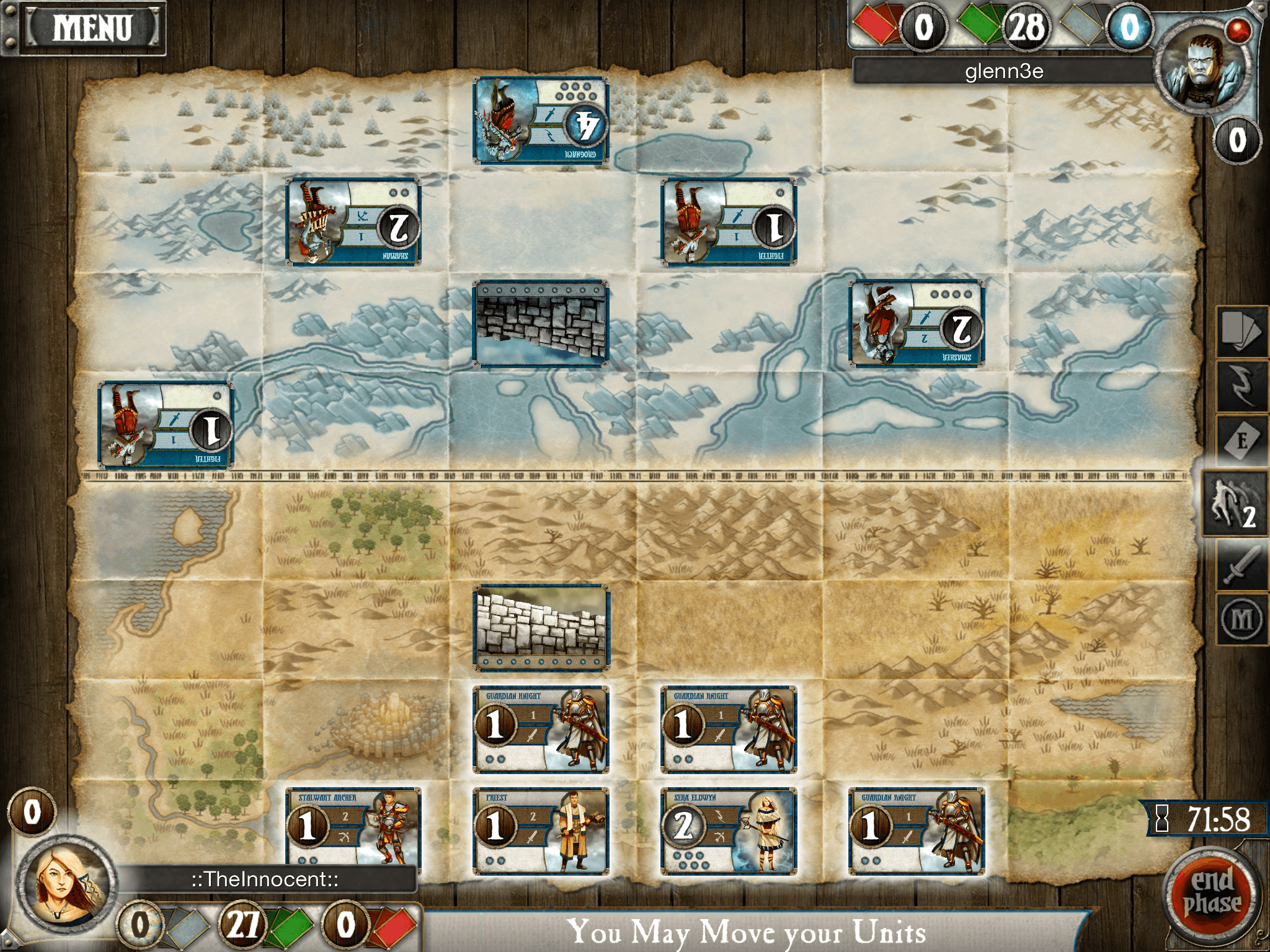 Who it’s For: Fans of Magic: The Gathering and Chess alike. Hero Academy veterans.

Why We Like It: Digital board game adaptations are great for a number of reasons. They’re cheaper than the physical versions (often $50+), they don’t require a lengthy set-up, and you’re never short an opponent when it’s time to play.

Playdek has been the master of digital adaptation for a number of years, and in our opinion Summoner Wars is the best of the bunch. It’s a clever mix of Chess and card combat games like Magic: The Gathering or Hearthstone. Players control different decks with different sets of cards, but they play those cards to a grid-based board with the goal of destroying the other teams Summoner (ie King). It’s the best of both worlds. 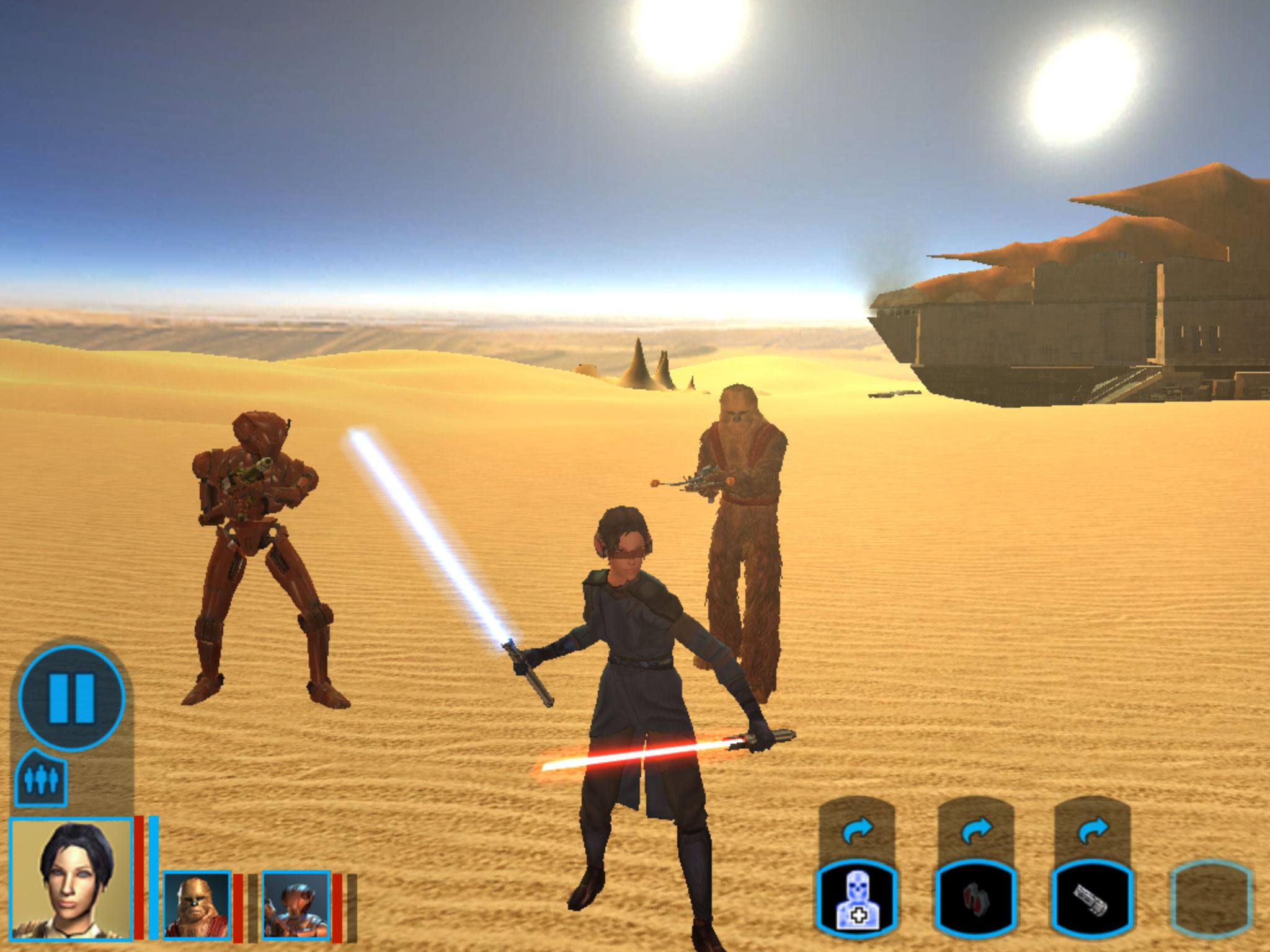 Who it’s For: Anyone who wants to play one of the greatest RPGs of all time. Sith Lords questioning their choices.

Why We Like It: Before BioWare created their own sci-fi universe with Mass Effect, they had a chance to play in someone else’s – and we’re very grateful they did. Originally released for the Xbox in 2003, Knights of the Old Republic isn’t just a great Star Wars game; it’s one of the best games of its generation.

KOTOR is (more or less) powered by Third Edition D&D rules. Players have the choice of pausing the gameplay to cue up battle moves, or just jump right in and choose them on the fly for a more action-oriented experience. And while that makes the game wonderful (and wonderfully unique at the time of its release), what you’ll really stick around for is the story. Most people would argue that the Star Wars Expanded Universe (may it rest in peace) produced far better storytelling than the films, and if you ask me, KOTOR is among the best.

This massive, sprawling, seminal RPG made the jump to the App Store in 2013 – and it did so without losing an ounce of what made it great. 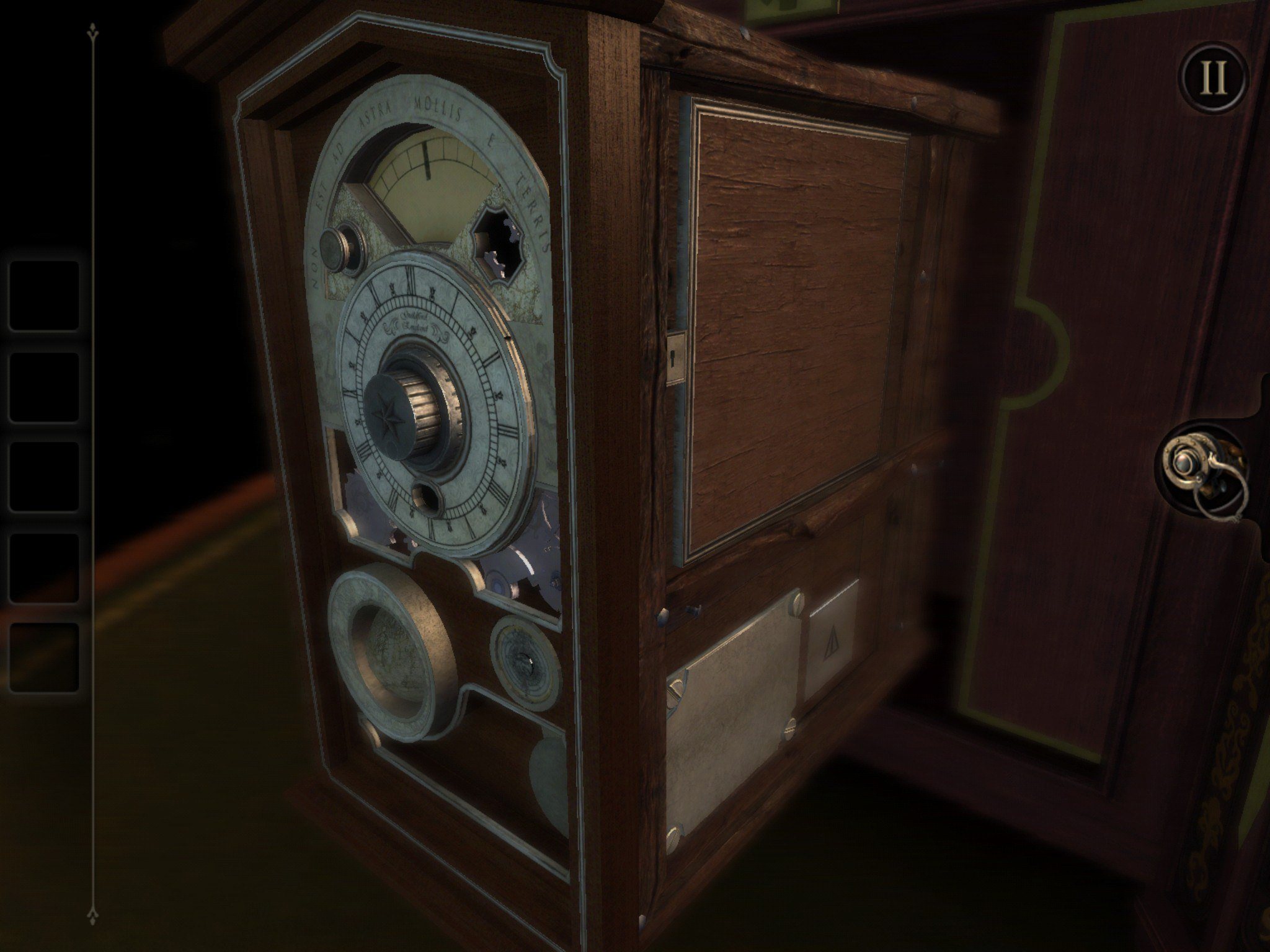 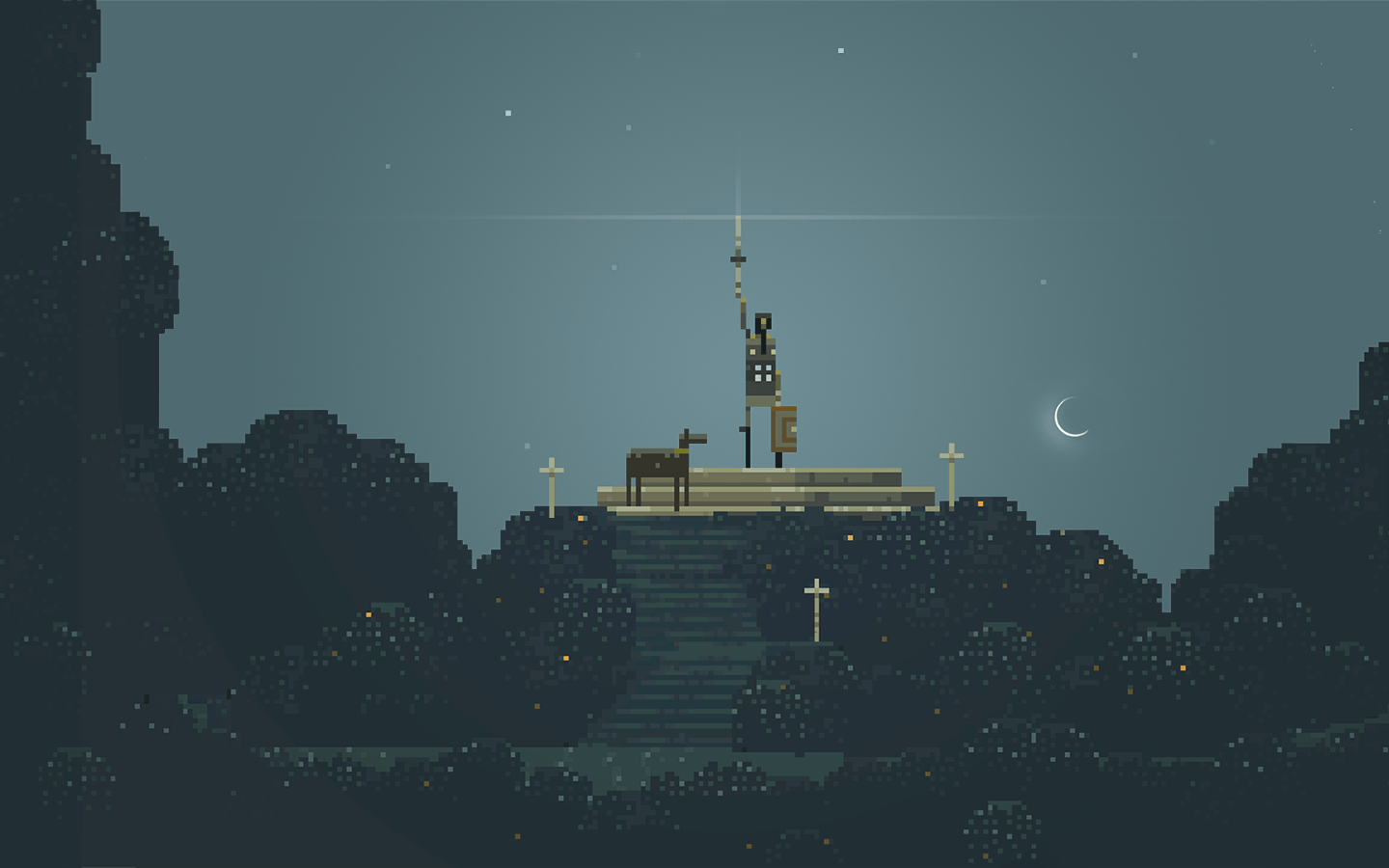 Who it’s For: Gamers who love style as much as substance.

Why We Like It: From its art to its music to its gameplay, Sword & Sworcery EP is just dripping with cool. It’s an adventure game that’s as much about its little vignettes as it is about its puzzle solving. It’s as much an interactive piece of art as it is a video game – and it’s very much a video game. Heck – the combat even feels like a Zeldafied homage to Punch-Out.

It’s hard to talk too much about this game without spoiling it, so I’ll just say this: both Gamezebo and TouchArcade picked it as 2011’s Game of the Year. Don’t let its age fool you – this one holds up masterfully. 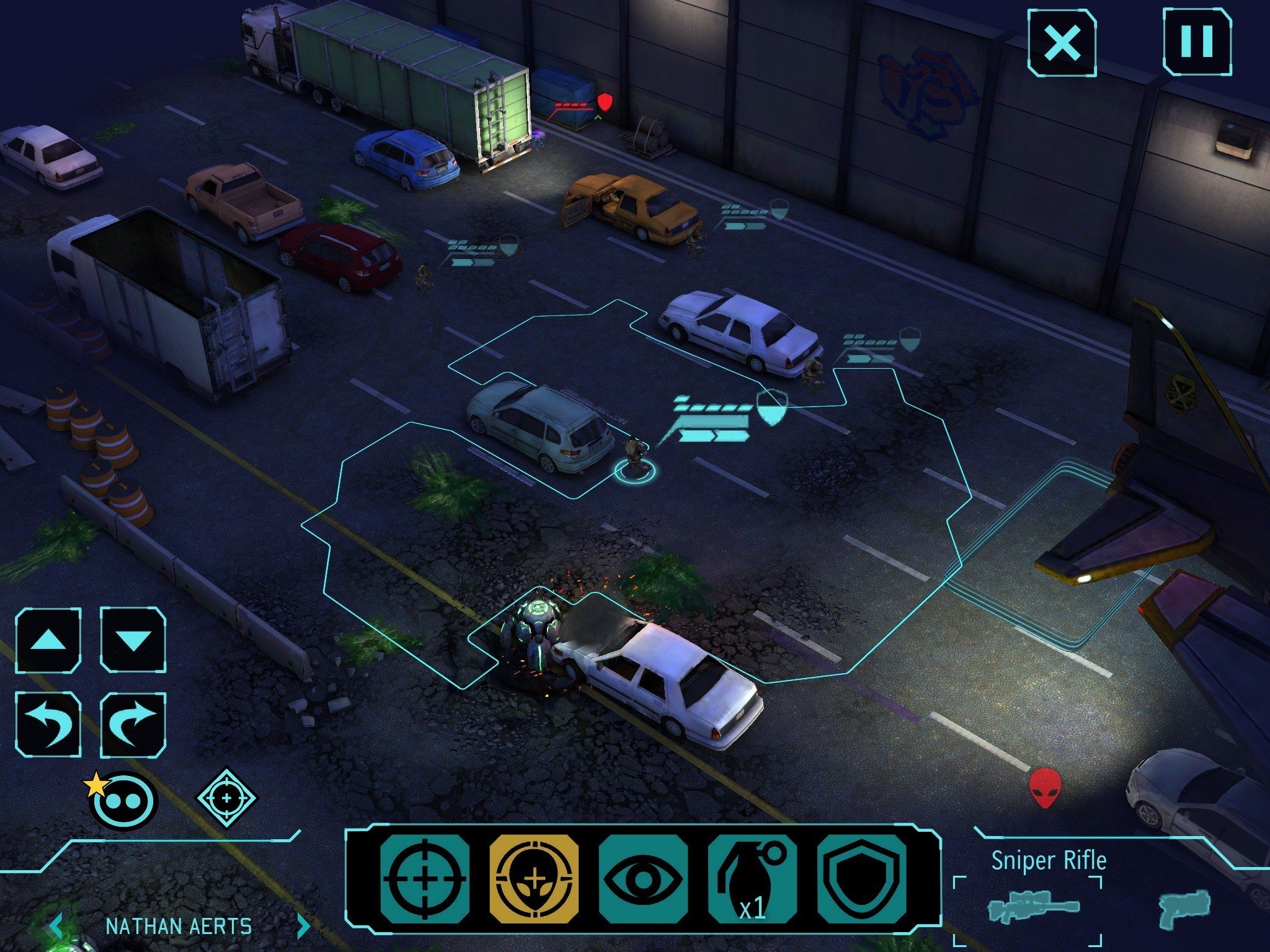 Who it’s For: Armchair strategists. Those willing to stand as our last line of defense against alien invaders.

Why We Like It: Few games in recent years have managed to get the sort of universal acclaim that XCOM: Enemy Unknown has, and rightly so. Building on the turn-based strategy formula that made the series a success in the early nineties, Firaxis’ series reboot offered up the exact same “just one more turn” addictiveness that they were already known for thanks to Civilization.

In its original release on PC’s and consoles, it was a mammoth game. AAA strategy gaming at its finest. It couldn’t possibly survive the transition to the iPad without making some big sacrifices… could it?

As it turns out, it could. 2K Games might charge a premium price for XCOM on the App Store, but it’s not without reason. In fact, thanks to its touch screen nature, some might be inclined to argue that the iPad build is preferable to its higher-end cousin. Whichever side you take in that debate, there’s one thing we can all agree on: XCOM on the iPad is one hell of a game. 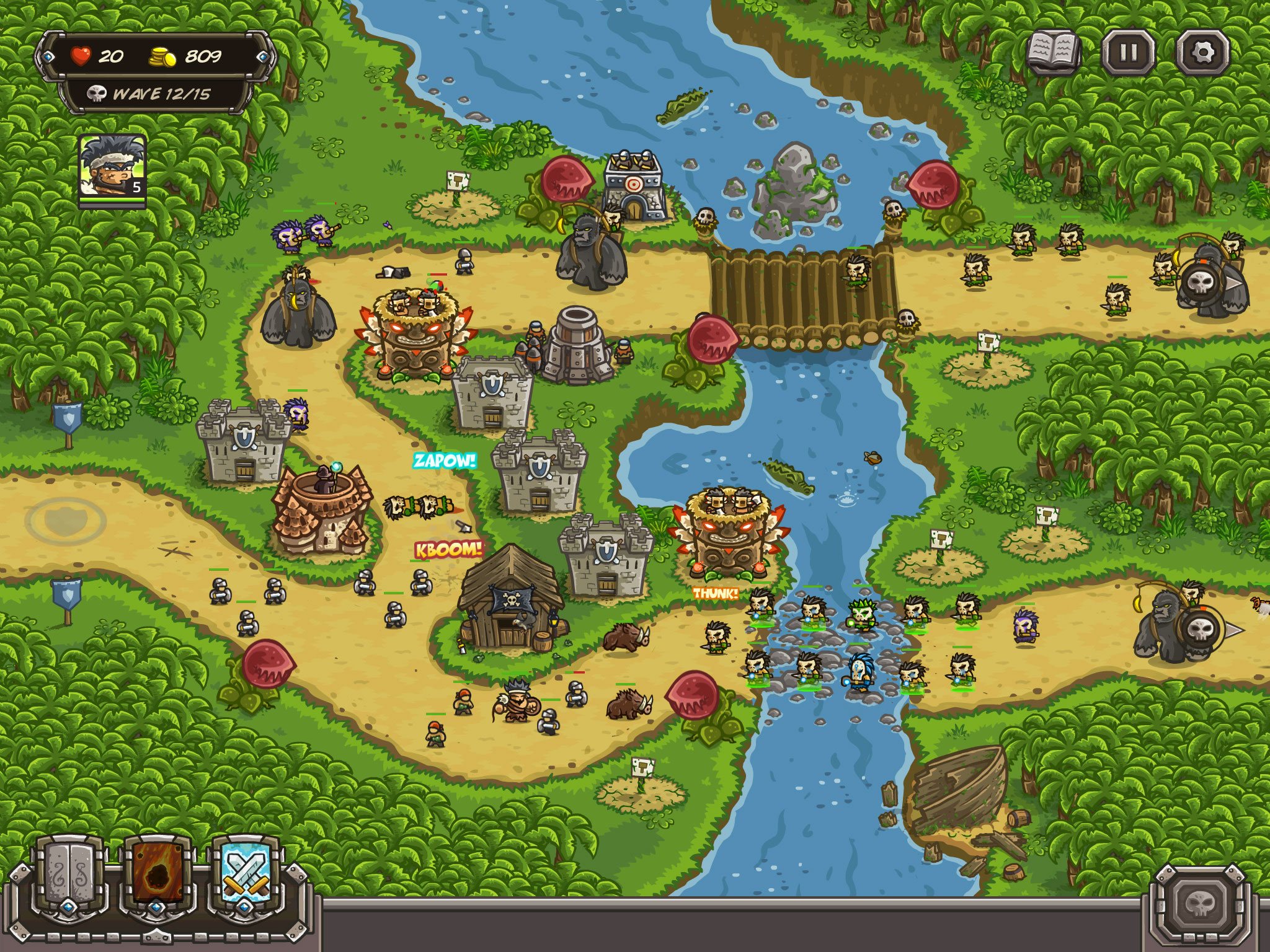 Who it’s For: Tower defense players who want to remember why they love the genre.

Why We Like It: I used to love tower defense games. FieldRunners was the first iPhone game I reviewed, and as far as TD games go, it was far from the last. But with so many coming out so often, it was pretty much impossible not to feel burned out by the genre. The Kingdom Rush series manages to rise above such burnout, delivering a tight, charming, and tough TD experience that reminds you of why you loved these games in the first place. Their combination of accessible strategy, well-balanced towers, and colorful design simply can’t go unappreciated. Kingdom Rush and Kingdom Rush Frontiers are easily the best tower defense games on the App Store.