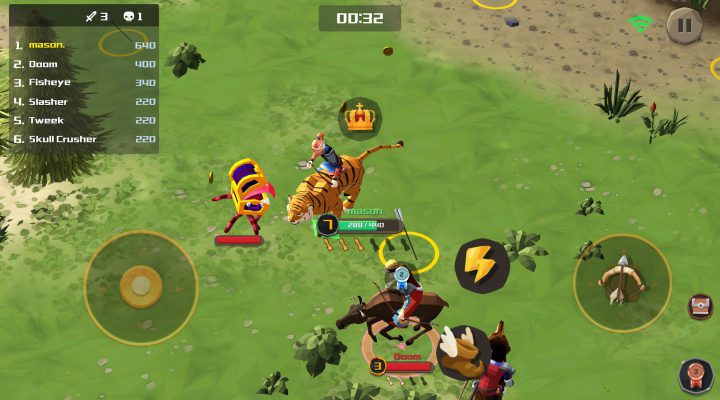 The .io genre has become massive in the past few years. It’s simple, it’s addictive and it’s loads of fun. The main idea is to move around a big map, getting bigger and stronger and defeating other players. It’s a mix of classic arcade ideas with some more modern sensibilities.

One of the biggest .io games in the world. It’s all about slithering around, getting longer and longer and smashing up smaller snakes. It captures everything that’s so ace about the genre – it’s simple, it’s fun and it’s painfully addictive.

This one’s got a bit more meat on its bones than some of the other games on this list. Run around an arena hurling axes in the faces of other players. As you get stronger you’ll get more axes and be able to pick up weapons that can slice up your foes when they get too close. There’s plenty of modes here too, and it’s well worth checking out.

Another legend of the .io genre. Agar.io on mobile has gone through plenty of iterations since it first came out a few years ago. It’s packed full of modes and bright ideas and it nails the balance between challenge and success. Check it out.

Another game from the creators of Agar.io, this one sees you playing as a teeny tiny tank. The addition of shooting makes this one a much more action-packed experience. It’s probably simpler than Agar.io, but it’s fun in its own ways.

This one is a super simplified version of a battle royale game. You’re sprinting around a map trying to be the last player standing. You can even team up with your friends to take on other gamers in duos mode.

In this one you play as a hole. You’re scooting around a city, sucking up fences, cars and buildings. The bigger you get, the bigger the items you can eat. Including smaller holes controlled by other players. It’s bonkers in all the right ways.

This one’s a lot like Axe.io, but instead of throwing axes you’re riding around on warbeasts. You start on a horse, but you’ll work your way up to a moose, a wolf, a tiger and even a dragon. It’s loads of crazy fun.

The twist with this one is that it takes place on a 3D playground. Instead of moving around on a flat plane, you’re turning corners to try and score the most points and become the biggest thing on the map.

Another more complex take on the .io template. In this one you’re driving around a map in a car, shooting the petrol poop out of a other player-controlled cars. It’s a fast-paced experience and it’s going to keep your fingers entertained for a good long while.

Here you’re capturing hexagons on a massive map. The more you capture, the more powerful you become. The winner is the player who’s got the most at the end of the game. Watch out for cheeky buggers trying to steal your stash though.

For more lists of the best games for mobile click here