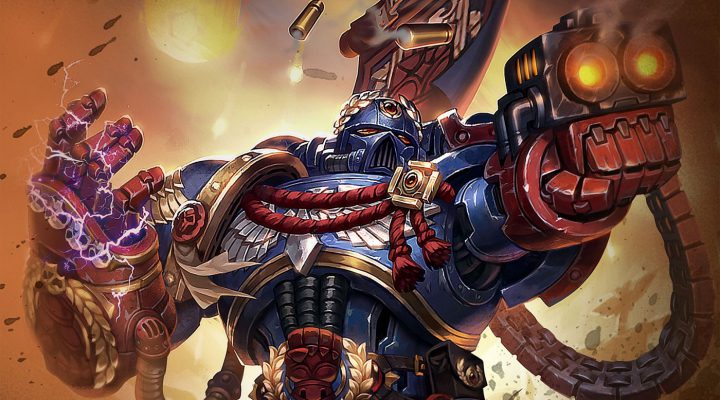 The past few years it feels like a month hasn’t gone by without a new Games Workshop game landing on the App Store and Google Play Store. From card games to MOBAs, board game adaptations to action adventure games, there’s loads to choose from if you’re a fan of Space Marines, Orcs or Elves.

But we thought it was a good idea to pick the ten finest examples that you can download in 2021. Whether you’re into the grim darkness of the far future or the fantastical, magic soaked past of Games Workshop’s mythos, you’re going to find something to fall in love with here.

We’ve even included a couple of games that aren’t set in either of those two fictional bookends of the universe. Check out the list below and get ready for plenty of dice-rolls, card-laying and general excessive slaughter.

Set during the civil war that forms a massive part of 40k’s backstory, this CCG sees you building up decks of Space Marines and leading them into battle. It’s got some super cool ideas, some super cool mechanics and if you love card games it’s well worth checking out.

It might only be in worldwide soft launch, but this is already shaping up to be among the best MMOs available on mobile. Set in GW’s fantasy realm, you pick a class and then head out on quests to slay the followers of Chaos and more. It’s gorgeous, it plays wonderfully and we’ve got super high hopes for it.

A resource managing strategy game set in the grim darkness of the far future. Think Clash of Clans but with Space Marines instead of cartoon fantasy creatures. It’s packed full of features, the combat is pretty interesting and if it gets its power claws into you you’re going to be hooked.

Another deck building card game, this time set in the Age of Sigmar mythos. So swords of magic instead of guns and, well, magic. You can even scan in real life cards to add to your team, which is a pretty cool twist.

An awesome digital version of a pretty darn awesome board game. Roll dice, draw cards and fight it out with other players to try and grab the Crown of Command. Full of neat ideas and surprises, it’s a great way to experience a classic board game without any of the additional rigmarole.

Stomp, smash and blast your way through the ruins of the future in this action game. You’re piloting a giant robotic killing machine and you need to turn anything that gets in your way into dust or a fine mist of blood.

A tactical, turn-based dungeon crawler that builds on the shape of the classic GW board game. Enter the tower, complete quests, toughen up your heroes and push on through hordes of enemies. Fun, fast and just the right amount of thinky.

This one’s based on a sometimes overlooked single player board game that gave you an hour to try and survive the mutated horrors of a future New York. It’s a pretty stiff challenge, but you’re going to have fun battling through the nightmares of flesh to try and take down their evil controller.

A mixture of cards, tactical warfare and down-and-dirty skirmishing, this is one of the finest examples of a 40k game available for mobile. Power up your squad and take down the legions of Chaos. It’s addictive, engaging and captures the spirit of Games Workshop’s tabletop battles perfectly.

A gorgeous and engaging mini MOBA set in the fantasy realm. Lead your troops into battle, capture important markers and slaughter anything that gets in your way. Then draw some new cards and do the same thing all over again, with a big, slightly mad grin on your face.

For more lists about the best games for mobile, click right here