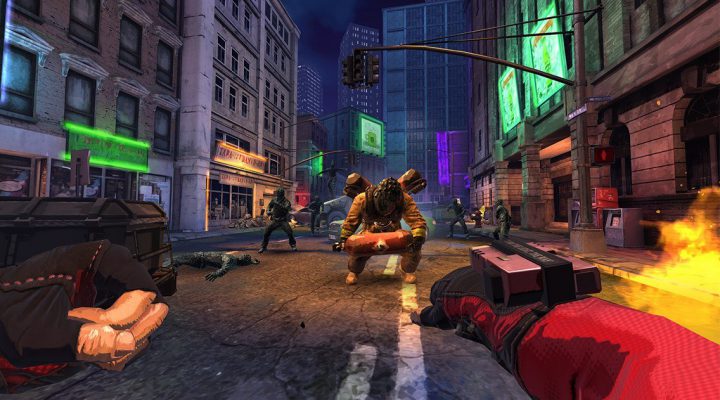 Easy to learn and play with effective difficulty ramp

No save feature or progress checkpoints

Current Squad is limited to 3 characters

In the past few years, several action movie releases have put resources into mobile games as part of their marketing campaigns. These games have had varying degrees of success, often utilizing reskins of old game engines or employing oppressive monetization systems that offer little return on investment. Suicide Squad, which premieres August 5, has recently offered up their own thematic game — and we are happy to report it is a very strong entry among action movie tie-ins. Unlike most games of this sort, Suicide Squad: Special Ops is actually a well-designed, engaging, and — surprise — entirely free game.

Suicide Squad: Special Ops is an endless survival high-score chaser where you play as three characters from the movie: Deadshot, El Diablo and Harley Quinn. You are fighting against waves of undead humanoid monsters who are shooting assault rifles and hacking with axes. You can choose the order you play the characters, but as each dies, a surviving member of the squad immediately takes over. The characters have unique weapons and skills, ideal for different types of attacks, and the game features robust and responsive melee and ranged combat. 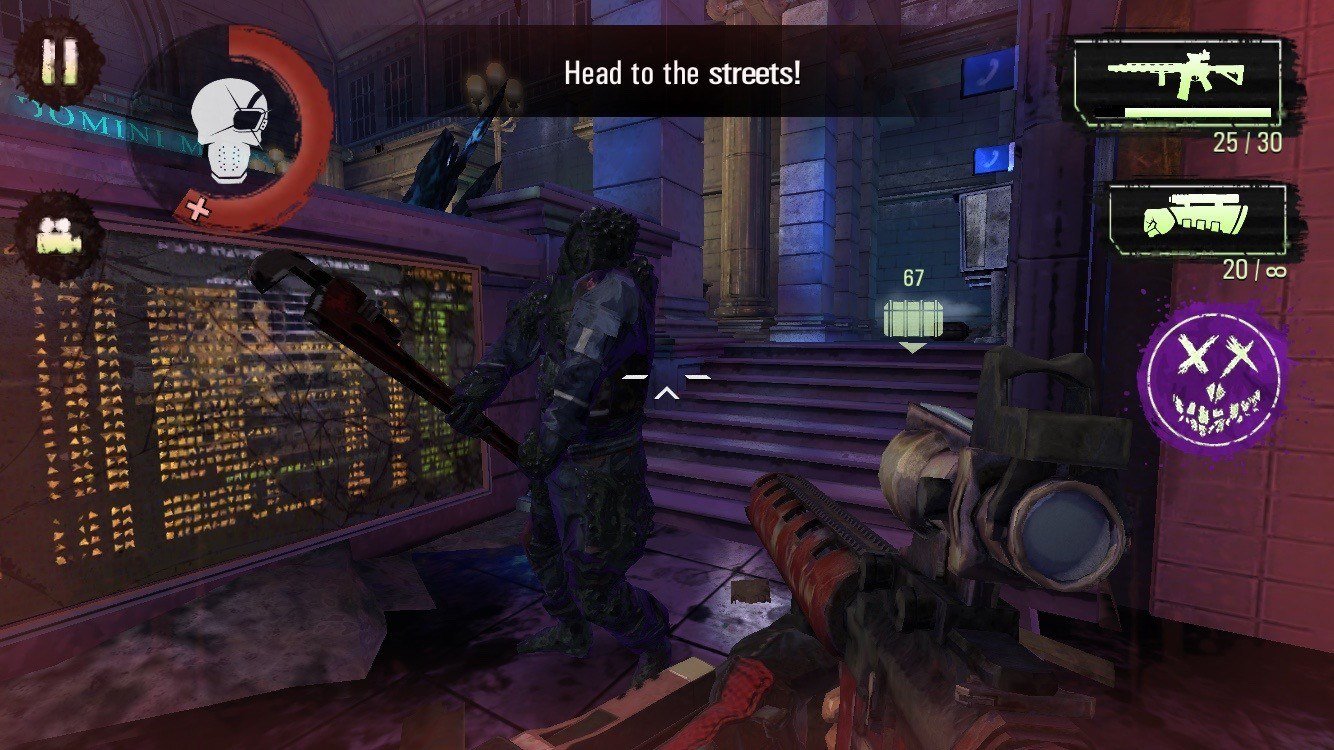 Deadshot wields an assault rifle and wrist-mounted guns, and can activate an aggressive “marksman mode” after making direct hits. El Diablo shoots fire streams from his hands and can unleash “super nova mode” after successive attacks. Harley Quinn carries a baseball bat and a magnum revolver and goes into brutal “frenzy mode” when she gets multiple kills. Each character’s power mode grants additional bonus points, making successive kills even more fruitful. This positive feedback cycle of more kills creating more power modes organically increases the excitement in the game, while raising the stakes as the onslaught persists. 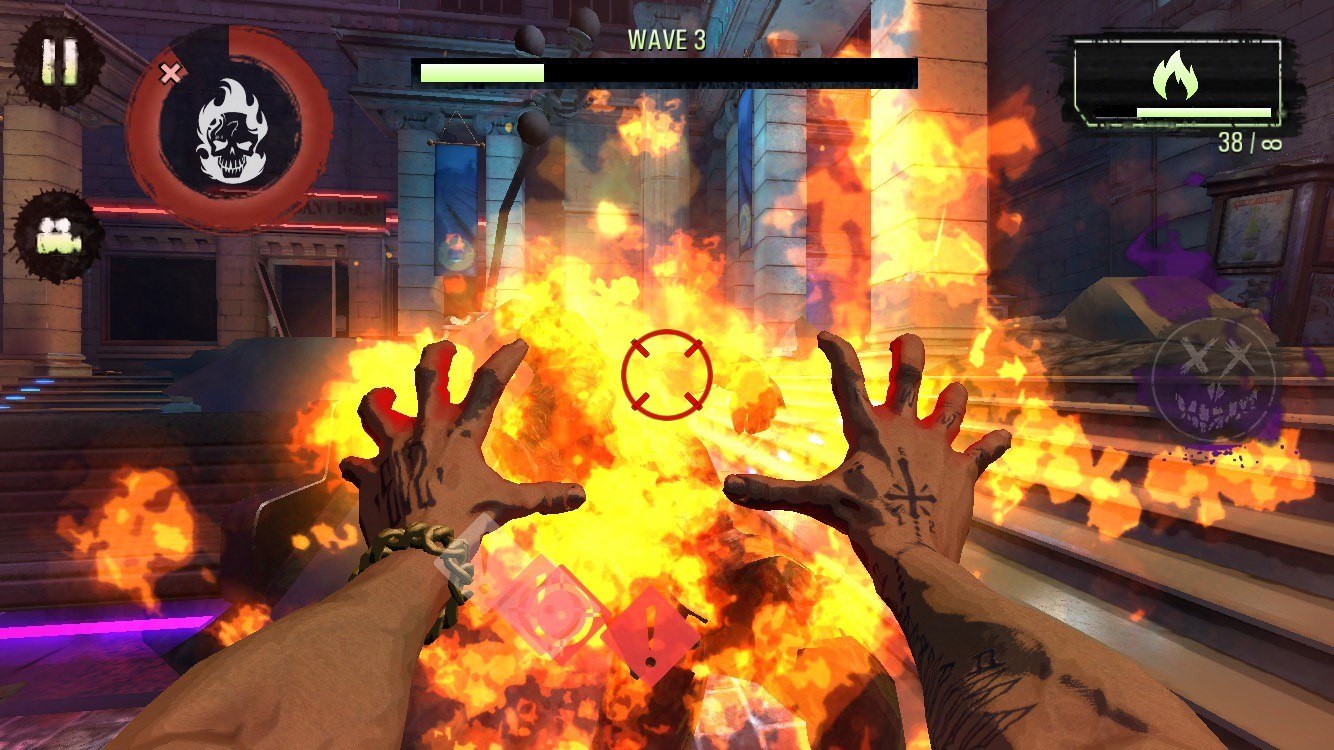 A notable design feature of Suicide Squad is that the experience of playing each individual character is unique, and you’ll always get to play all three so you’ll improve with each over time. It feels very different to shoot streams of fire than to bash with a baseball bat. Your character isn’t attacking on rails, but rather has a full 360 degrees of smooth, responsive movement. Fighting is simple and intuitive because once an enemy is within your crosshairs you’ll automatically attack. You’ll need to reload using the ample ammo crates throughout the scenes and as baddies expire, you can grab health boosts to recoup your stats. Supply crates appear periodically and offer fun extra features and consumables. 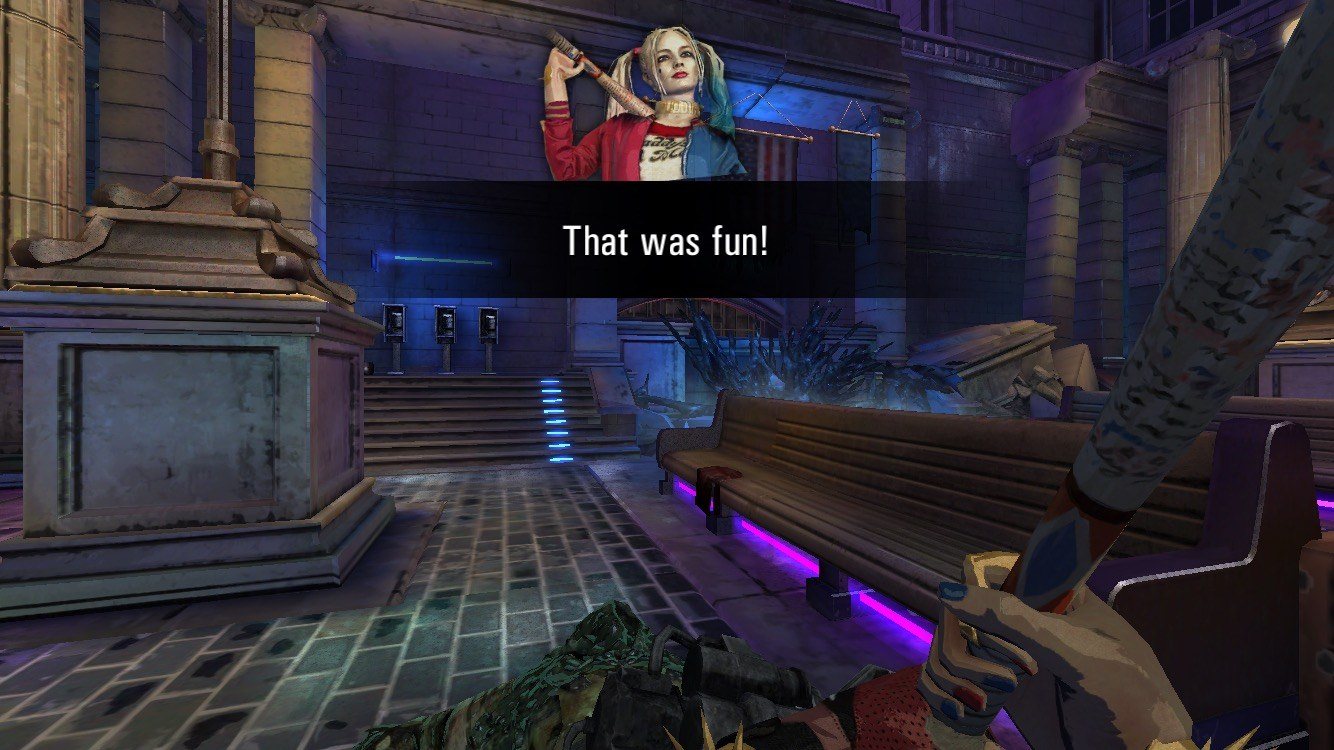 Though two of the characters have two weapons to equip, there are no confusing upgrade systems for the weapons. Gameplay strategy is extremely accessible, particularly for first-time FPS players or those who normally shy away from combat. Because it is an endless survival game, you will have cheap deaths at the beginning while you’re learning each squad member’s skill. But with each successive replay, you’ll improve and get further into the gritty world of the game. The waves of enemies do get really intense the further you advance, but you’ll also be more skilled and more powerful as you progress.

For all the perfect points the game scores, there are a few missed targets. There is no way to save game progress and no checkpoints, so you’ll be starting over each time you play. As such, you’ll need to be ready to sink some serious time into playing if you want to advance meaningfully. The “pause” button also doesn’t work if you try to pause in the middle of an attack; you can only pause before a wave starts or after a death. Some folks might not like that there are currently only the three characters to play, but there’s certainly potential for more characters to be introduced.

With the few small issues aside, perhaps what’s most notable is that Suicide Squad: Special Ops is completely free. There are no energy systems, no gates aside from level progression, and not a single IAP to be had anywhere in the game. You can play for as long as you can survive, or as long as you’re willing to start over. Suicide Squad delivers a powerful hit, and you don’t have to drop a dime to get in on the action.