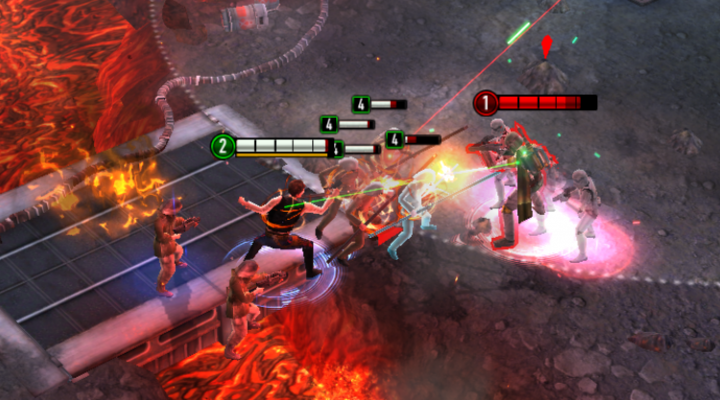 Shows some thought to easing in new players.

The wait between reward packs is real ... and long.

It’s hard to imagine any genre of mobile game that hasn’t made a trip to George Lucas’ galaxy far, far away. Or at least it was until Netmarble unveiled Star Wars: Force Arena, a title that mashes up MOBA and collectible card game elements a la Clash Royale, but leans more toward the MOBA side.

Naturally, that makes PvP battles against other players the very heart of Force Arena. Each player has a leader character that is the focus of their efforts to blow up the enemy base. In classic MOBA style, said base is protected by turrets in separate lanes on the game map. Along with getting one step closer to the base, destroying the turrets is an end to itself since it can help decide the match if both bases make it the whole three minutes intact. 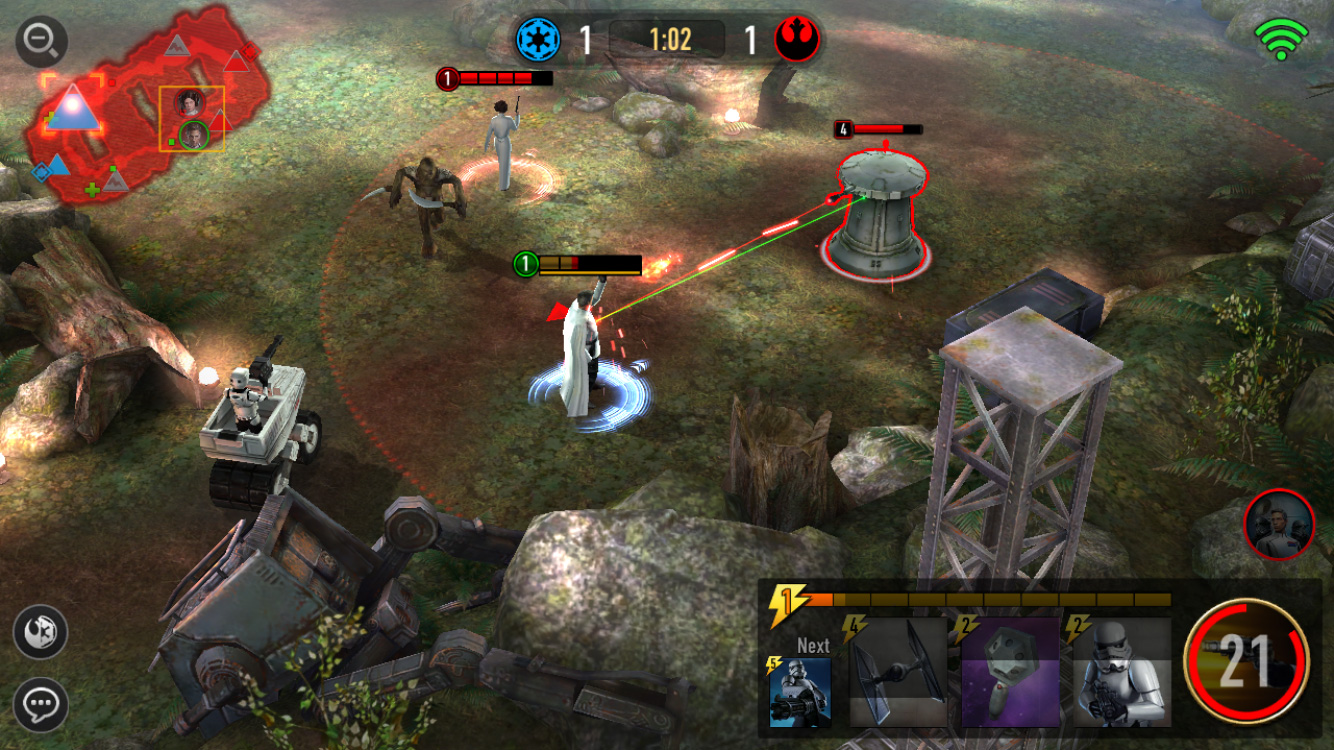 Instead of auto-generating spawns, the remainder of the forces on each side are introduced into battle by a deck of cards representing Star Wars characters, vehicles and weapons. Each one has an energy cost, and when a player’s pool of energy has built up to the proper amount, a card can be played simply by dragging it onto the battlefield. Last but not least, each leader has a special ability activated with the tap of a very large button that can be used whenever its cooldown timer expires.

That might sound like a lot to keep track of once the blaster bolts start firing, and indeed, every match is a fast-paced affair. What Netmarble gets right that makes Force Arena a bit more accessible than a standard MOBA is the scale: the maps have only two lanes, and the physical distance between bases is not that great. It’s possible to be caught napping if you aren’t paying attention to the mini-map, but there’s never a time when leaders are spending too much time hunting for each other. There are moments when you wish for a bit more control than the tap-based movement system allows, but they’re few and far between. 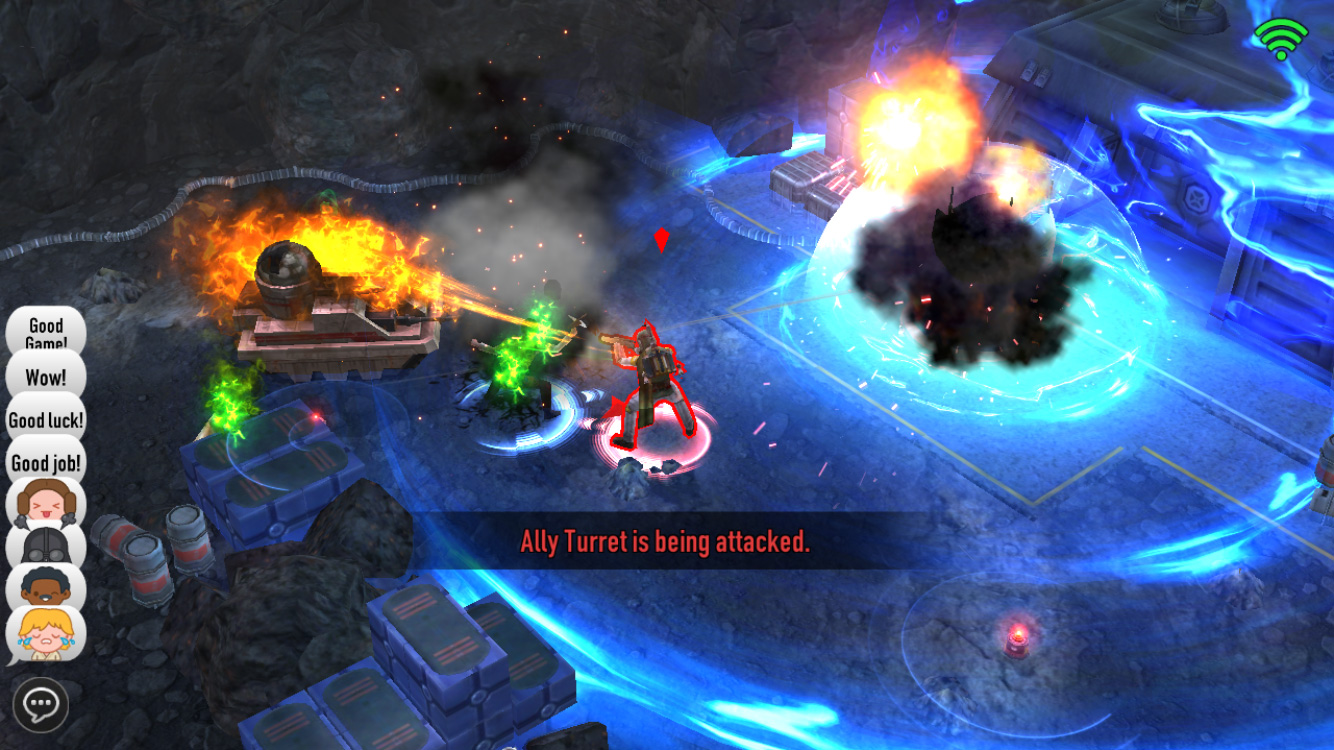 Force Arena also has a 2v2 mode which can get even crazier. A guild system provides an easy method for finding and teaming with other like-minded players — including practice battles which don’t count against the game’s ranking system — and there are training battles to test out new deck combinations and strategies.

Netmarble’s Marvel Future Fight gives it prior experience handling big time IPs, and the company brings the same level of detail to Star Wars that it did to superheroes. The graphics are super sharp, especially impressive on the leader characters, and the music and sound effects are instantly recognizable. The whole franchise is well represented, from the first movie up to and including Rogue One.

Advancement comes via leveling up individual cards, a system that also takes a page from the Clash Royale playbook. Collect enough copies of the same card and the right number of Credits, the game’s soft currency, and voila, you’ve got a more powerful card. Fighting up through the PvP ranks unlocks more cards and make the strategy ever more intricate, while both limited time and ongoing missions ensure there are always goals to work toward.

If there’s an area where it might have been nice to see the devs blaze new ground, it’s in the reward system. Force Arena hands out card packs with each victory, but you can only store four of them at any given time, and even the ones with least goodies inside take four hours each to unlock. Premium Boosters unlock a fifth slot and half the time needed to open packs, but the cheapest of those costs $5.99 (though it lasts for a week, so stands as a reasonable value if you are hooked and playing constantly). 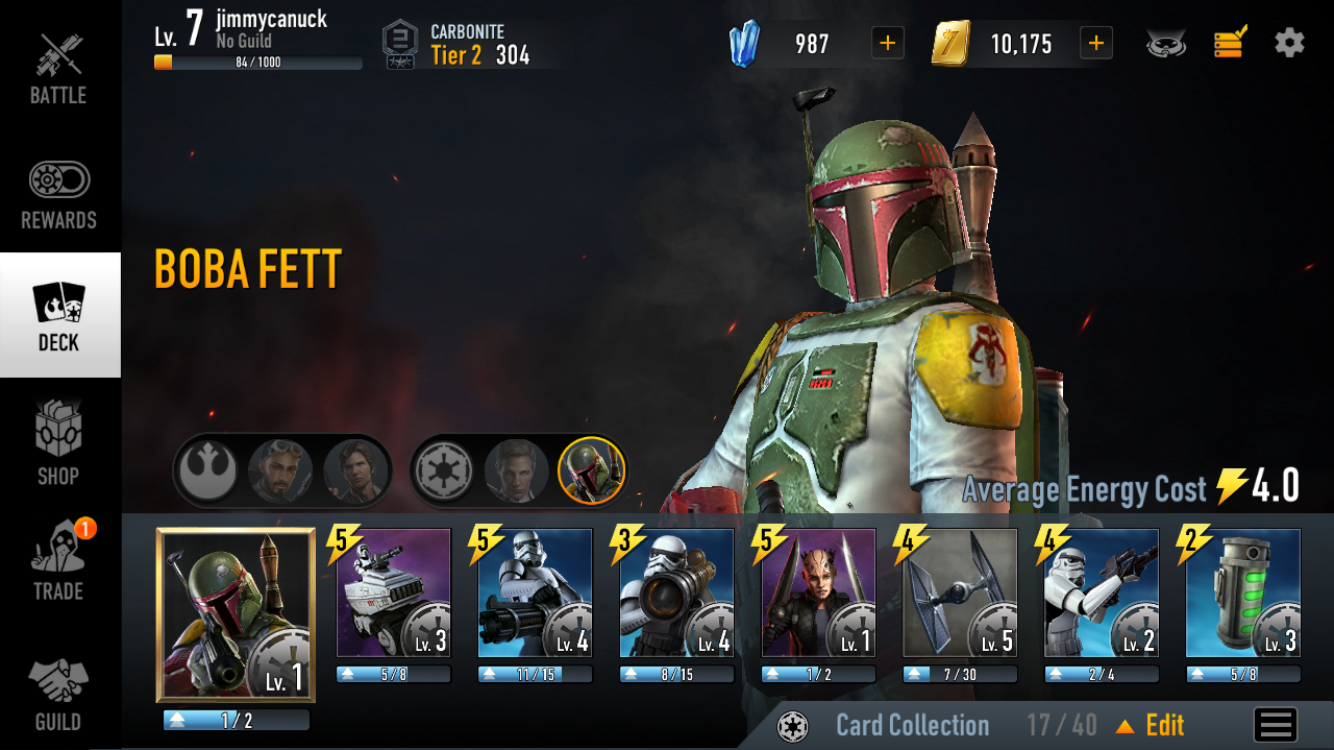 It feels like Star Wars: Force Arena delivers enough fun and nostalgia that the de facto four-battle limit won’t be a dealbreaker, but it is something to keep in mind. It’s certainly a worthy addition to the overall pantheon of Star Wars mobile games, one that gives you new hope — pun fully intended — that creative ways to approach the world’s most famous sci-fi series are still out there.