SPACEPLAN Review: Of Satellites and Potatoes 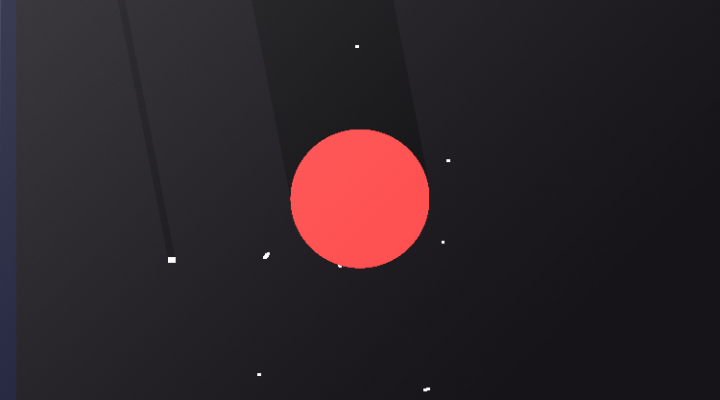 Break with genre conventions to try something new

Funny, clever narrative that keeps you wondering whats next

An idle clicker with an ending was a neat idea, but you're left wanting more

With no shortage of options, and a fair share of genre burnout on my part, it takes something pretty unique to get its hooks into me when it comes to idle clickers. SPACEPLAN, at least for a weekend, was that something unique.

SPACEPLAN bucks a number of trends that the genre has established, and is usually the better for it. For one thing, this isn’t a free-to-play game. As an idle clicker with a premium price, the core mechanic here isn’t built around enticing you to watch ads as you make incremental progress. Instead, SPACEPLAN can focus on something that few other clickers have tried before: a story. SPACEPLAN offers up an ongoing narrative about your journey across time and space to reset Earth and make it the world you know and love once more. The narrative is told through your interactions with your spaceship’s AI, and every upgrade you make (click click click) lends to a greater part of the story. 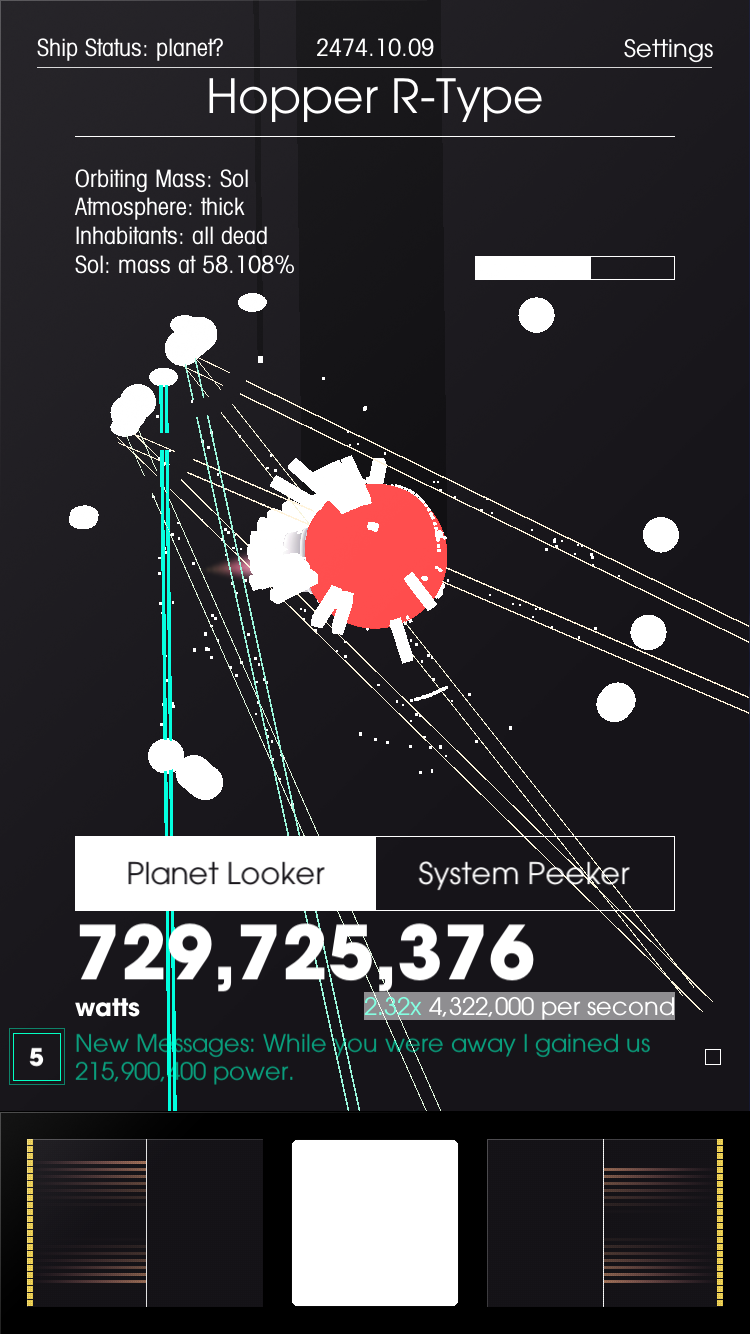 Sometimes this means you’ll get a clever new piece of text to read. More often than that, though, you’ll see your upgrades actually take place on the planet view. At first these upgrades are simply cosmetic, but as you get deeper into the game you’ll need to use some precise timing to fire potatoes into key points in the planet — kind of like the Death Star Trench Run by way of Lay’s Potato Chips™.

Rather than relying on the genre-standard “prestige,” the act of resetting your progress to earn a larger modifier on your next attempt, SPACEPLAN resets its progress by sending you to a new planet so that it can both reset your progress and advance the narrative. It’s a little change, but it makes a big difference. For one, the ability to prestige is taken completely out of the player’s hands — you’ll advance when you’ve completed the tasks needed to move the story forward. For another, it creates a sense of achievement. Prestige can sometimes feel like a defeat; “I guess I’ve made it as far as I can, I’ll have to start over.” SPACEPLAN turns that model on its head, making you feel like a winner every time you move on. 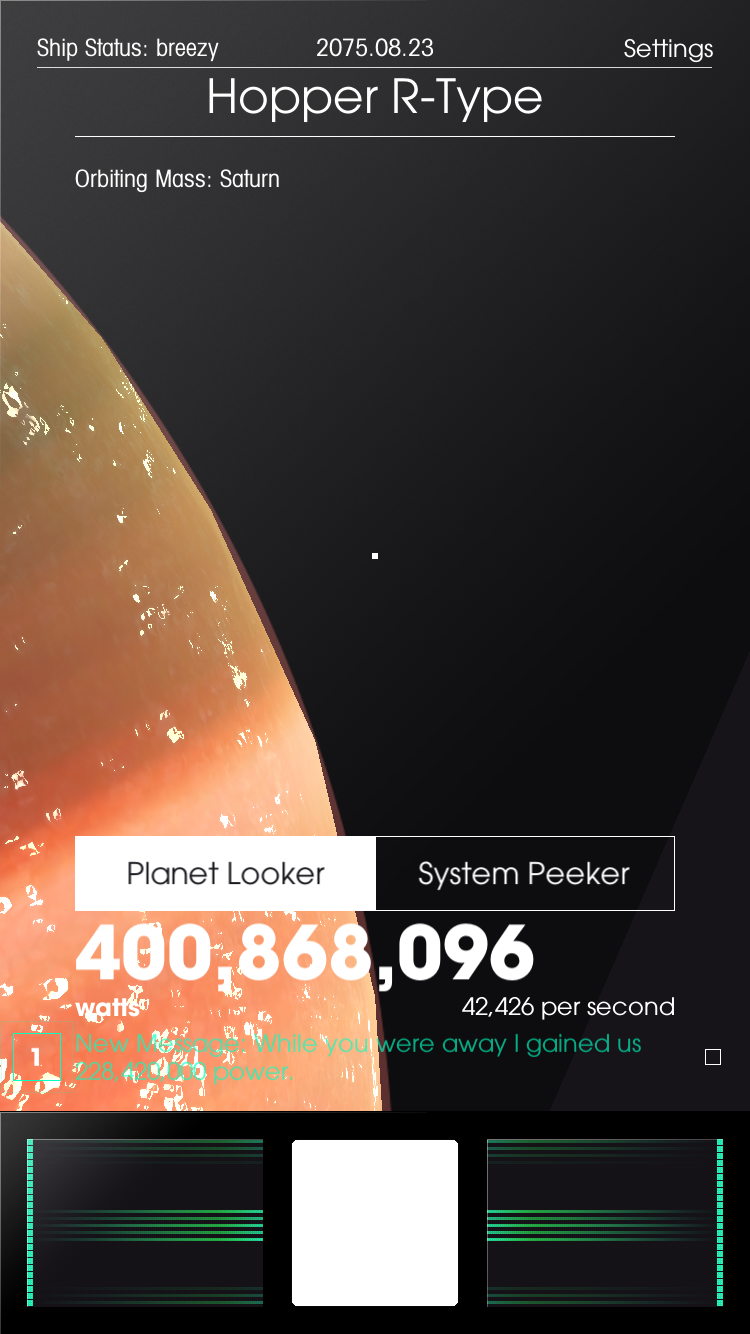 It’s also a beautiful game. Much of the presentation is minimalist and flat, but then surprises you with moments of depth and wonder. There are even some great animated moments that feature potatoes — THIS GAME LOVES POTATOES — that will blow you away with detail.

And SPACEPLAN is funny, too. The constant use of potatoes will leave you chuckling, because why not potatoes? Your ship’s AI will have you laughing out loud at points. It’s a kind of smarmy, silly, smart sci-fi humor. I wouldn’t compare it to Douglas Adams or anything, but if he were alive today and playing mobile games, I think he’d give SPACEPLAN high marks.

The only problem with SPACEPLAN — and it’s kind of a big one — is that there’s a clear end to the game that you can reach over the course of a weekend. You’ll get plenty of time with it, checking in periodically to make upgrades and keep earning those spacebucks, but when you reach the end, it’s really over. This breaks with genre conventions, and there’s no question that it was a brave move — but as a fan of idle clickers that are more keen to keep me playing than tell a story, I felt a real pang of regret that I couldn’t keep the experience going.

Still, if the only complaint I have about SPACEPLAN is that there isn’t more of it, that’s a pretty good problem to have. If you’re leery about spending money to buy a premium idle clicker, I get it — but you should really get over that hesitation. SPACEPLAN is about as clever and enjoyable as clickers get. It’s salty like french fries, but in all the right ways.