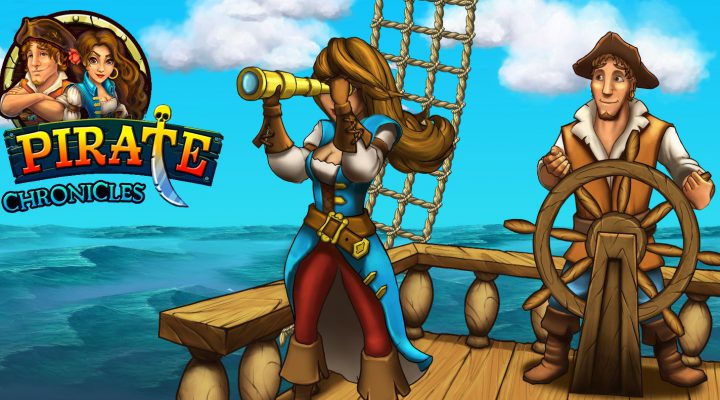 Easy to learn gameplay with some nice twists on the norm.

Some queueing issues slow down the early parts of the game.

If it’s a pirate’s life for ye, then ye are in luck. Pirate Chronicles takes the familiar time and resource management formula and mixes in a little old fashioned RPG knowhow. Instead of traveling across the kingdom repairing broken roads, you’re hopping around islands fixing cannons, collecting gold, and upgrading your pirate base with some brand new swag.

Pirate Chronicles tells the tale of a crew of do-good pirates facing off against the Black King, an evil-type dude who believes the only thing pirates should seek is loot. He attacks our heroes’ ship, kidnaps their captain and leaves them stranded at sea. Fortunately a researcher sails by and rescues the crew, but they’ve got a lot of work to do if they want to fight off the Black King’s ships and save their captain. Step one: get those cannons repaired! 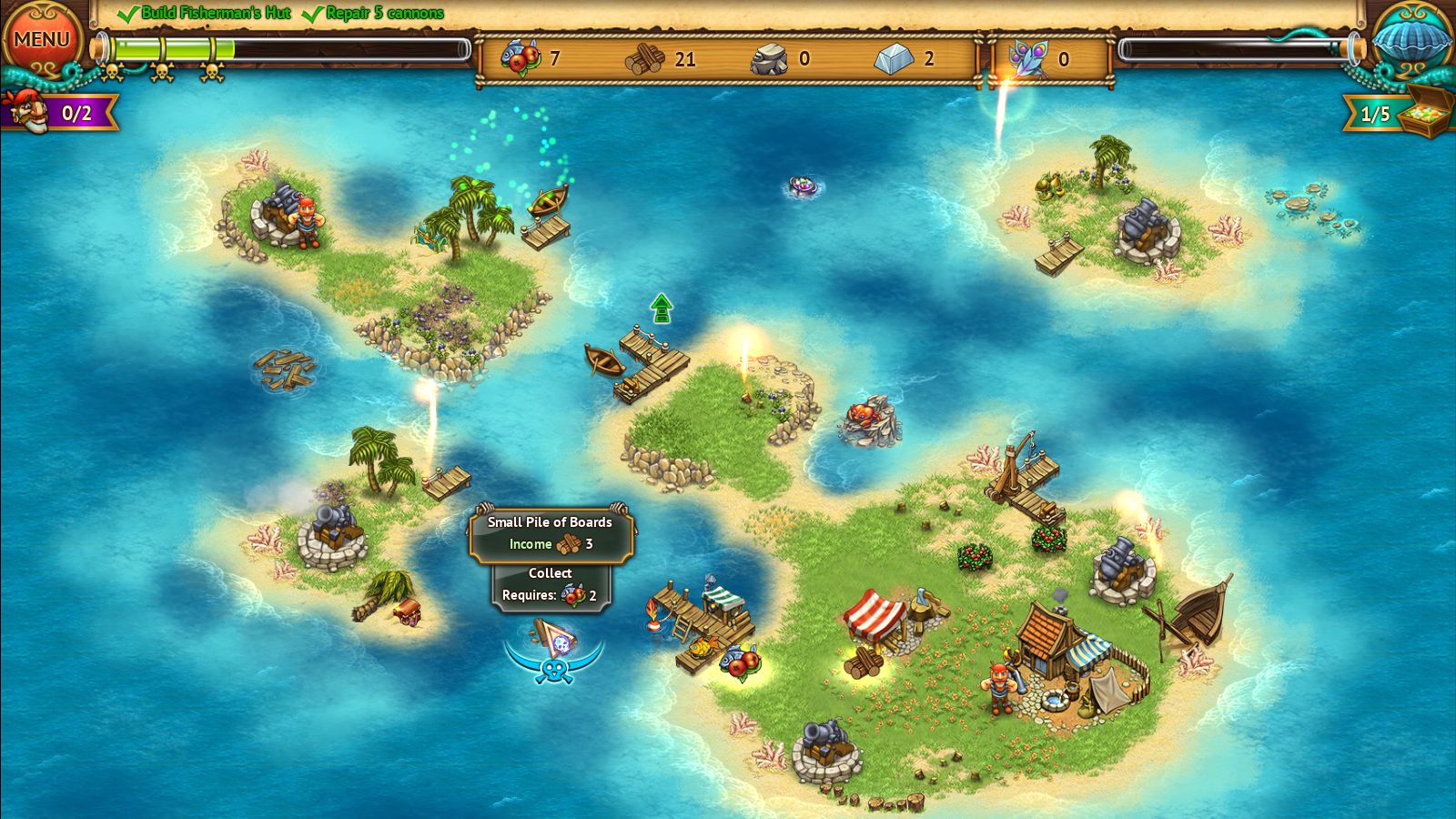 Just like most time management games, Pirate Chronicles sets you loose in a world rich with resources and busted resource-generating buildings. Wood, food and stone are the first things you’ll be concerned with, though a couple of other resources appear later in the game. To get wood you can send workers to chop trees, pick up piles of flotsam, or repair a lumber mill that will generate wood on a regular basis. Stone and food have similar methods of collection, allowing you to pick up a pile in a pinch or focus your efforts on building a consistent stockade.

Resources in hand, it’s time to do some repairing. Each level has a set number of goals you must reach in order to continue. Those goals almost always include fixing cannons to fight off the Black King’s army. You don’t get to shoot them or anything, but it’s nice knowing there’s a bit of gunpowder on your side. You’ll also pick up treasure, mysterious golden idols, and repair shipyards that give you access to canoes, opening up distant islands for your workers to plunder and explore. 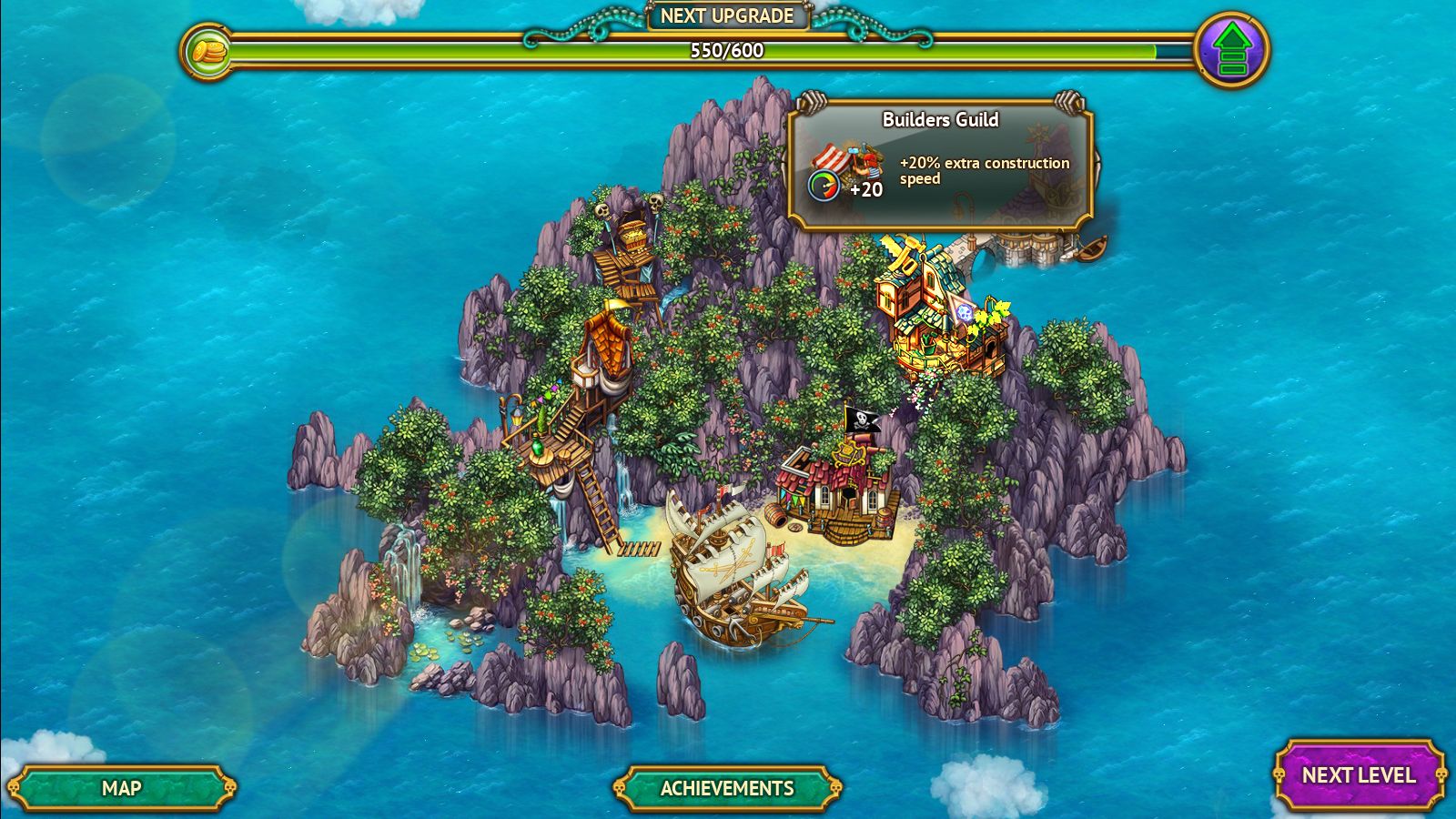 One of the more exciting aspects of Pirate Chronicles is Pirate’s Heaven. As you complete levels and earn gold, you slowly add buildings to your home base. Each upgrade allows you to create a new structure, increasing numbers like worker speed and construction rates. Essentially, you’re leveling up the entire game, and you get to choose what gets upgraded first. It’s the small things in life that make the most difference.

Pirate Chronicles looks and sounds fantastic. The background score is nothing short of epic, well suited for a swashbuckling Pirates of the Caribbean film. The gameplay is smooth and easy to work with, but there’s one shortcoming that makes things move slowly, especially at the beginning of the game. Worker actions cannot be queued. Most time management games let you click on objectives your henchmen can tackle in the order they were selected. Here, you can only assign a task if there’s someone available to start on it, leaving you in waiting mode when there’s only one or two pirate people on your side.

Despite that small early game hiccup, Pirate Chronicles manages to deliver a heavy hitting time management experience. Just enough familiarity to let you dive right in, but plenty of variety to keep you plundering into the sunset.