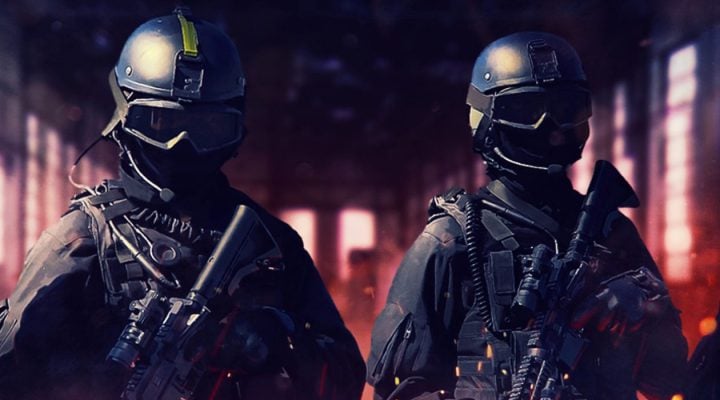 Seems to be some server issues on iOS.

Only a handful of maps to play in.

Truly excellent mobile first-person shooters are rare. Thus, iOS users should rejoice that the richest first person shooter experience on mobile has finally arrived on the App Store. Over the last year and a half Modern Strike Online has quietly offered Android users the best-looking, smoothest running and most engaging FPS experience ever for mobile. In return, those who found the game have provided the critical mass needed to ensure that neither rookie nor pro is left waiting for a game that’s both fair and challenging.

Now that it’s available for iOS, Modern Strike Online has the ability to up the ante in terms of what iOS users can (and should) expect from multiplayer mobile FPS shooters from here on in. However, to make a real impact, it needs to find the audience needed to support and sustain the gameplay experience currently available on Android. That’s going to be difficult to do if issues with server stability that have been leading to players being kicked out of games prematurely or waiting whole rounds with no one to play against aren’t cleared up.

Fortunately, the quiet launch approach means that there just might be enough time to secure stability before a critical mass of players descends on the game. Even better, it seems as though the game’s mysterious developers are already taking the issue seriously with things getting noticeably better over the last week. With that in mind, the bulk of this review will be based on our experiences with Modern Strike Online prior to its iOS launch, but the gist is the same for players on both devices apart from the server issues. 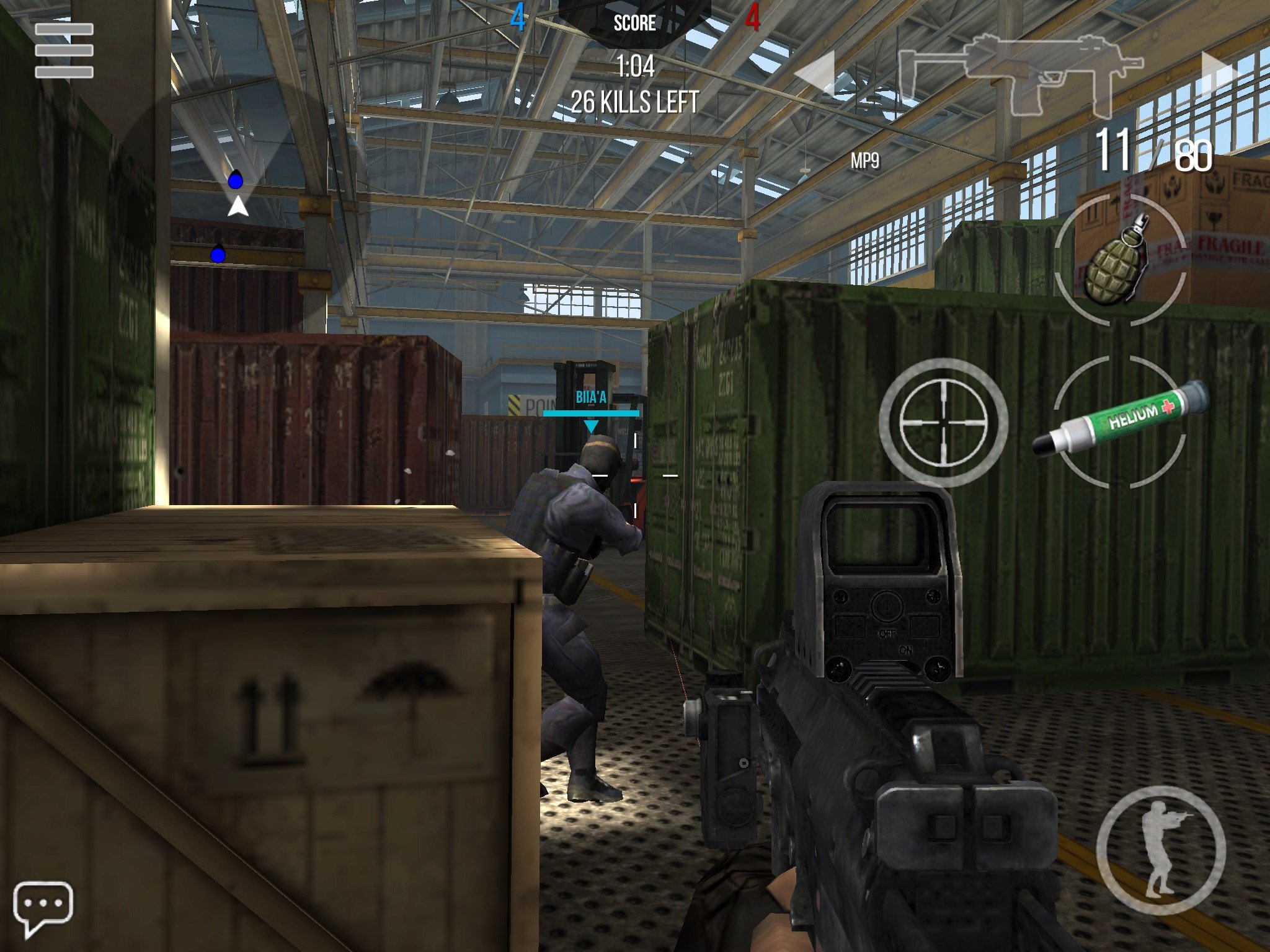 What can players expect from Modern Strike Online? First, and perhaps most importantly, quality matchmaking. In an era where many free-to-play shooters leave you feeling as though there’s no way to win without dropping hundreds of dollars into top-line weaponry, Modern Strike Online’s matching system means that almost always you’re facing off against players that are truly a good fit with your skills, experience and assets. After at least 18 months of consistent Android play, there’s ever only been a handful of total blowouts – and this is coming from someone that can’t last more than 90 seconds without accidentally blowing themselves up in Halo.

Beyond the matchmaking, there’s the game’s intuitive touch controls that reflect the strengths and limitations of a touch screen. Modern Strike uses autofire by default, giving a big boost to players who might not be the strongest shooters. Still, it also allows players to use manual fire, thereby appeasing FPS sharpshooters. The aim function does improve accuracy considerably, especially for those looking to rack up headshots specifically — though it’s still possible to get by without it if moving, looking and trying to avoid enemies is already a bit overwhelming. 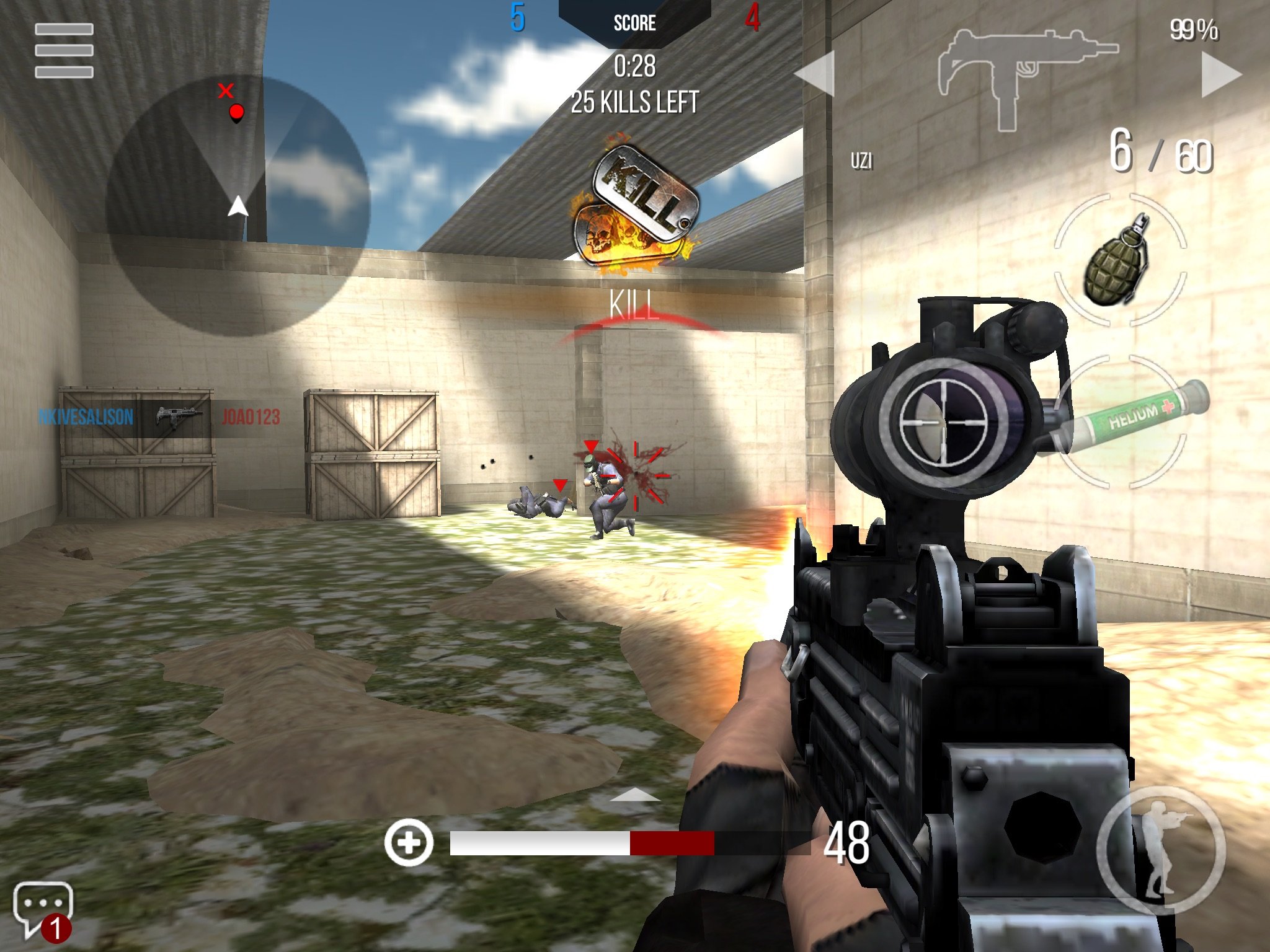 There isn’t a vast array of maps in Modern Strike Online, but rather than making the game feel boring and repetitive, it’s something that works really well. As quickly as you can get a lay of the land, there’s always new hiding spots and routes through the map to discover. This helps speed up progression and with certain equipment and game modes only becoming accessible after you reach a certain level, hitting level 10 quickly is something you’ll almost certainly want to do.

What the game lacks in terms of a glut of maps, it makes up for in terms of different types of game modes. There’s the common team and everyone for themselves deathmatch scenarios of course, but unlike many mobile FPS games, Modern Strike Online certainly doesn’t stop there. Make it to level 10 and you’ll also be able to play Bomb Mode (unlocks at level 8), Team Squad (unlocks at level 8), Team Battle, Hardcore and Custom Games (designed for playing with friends). 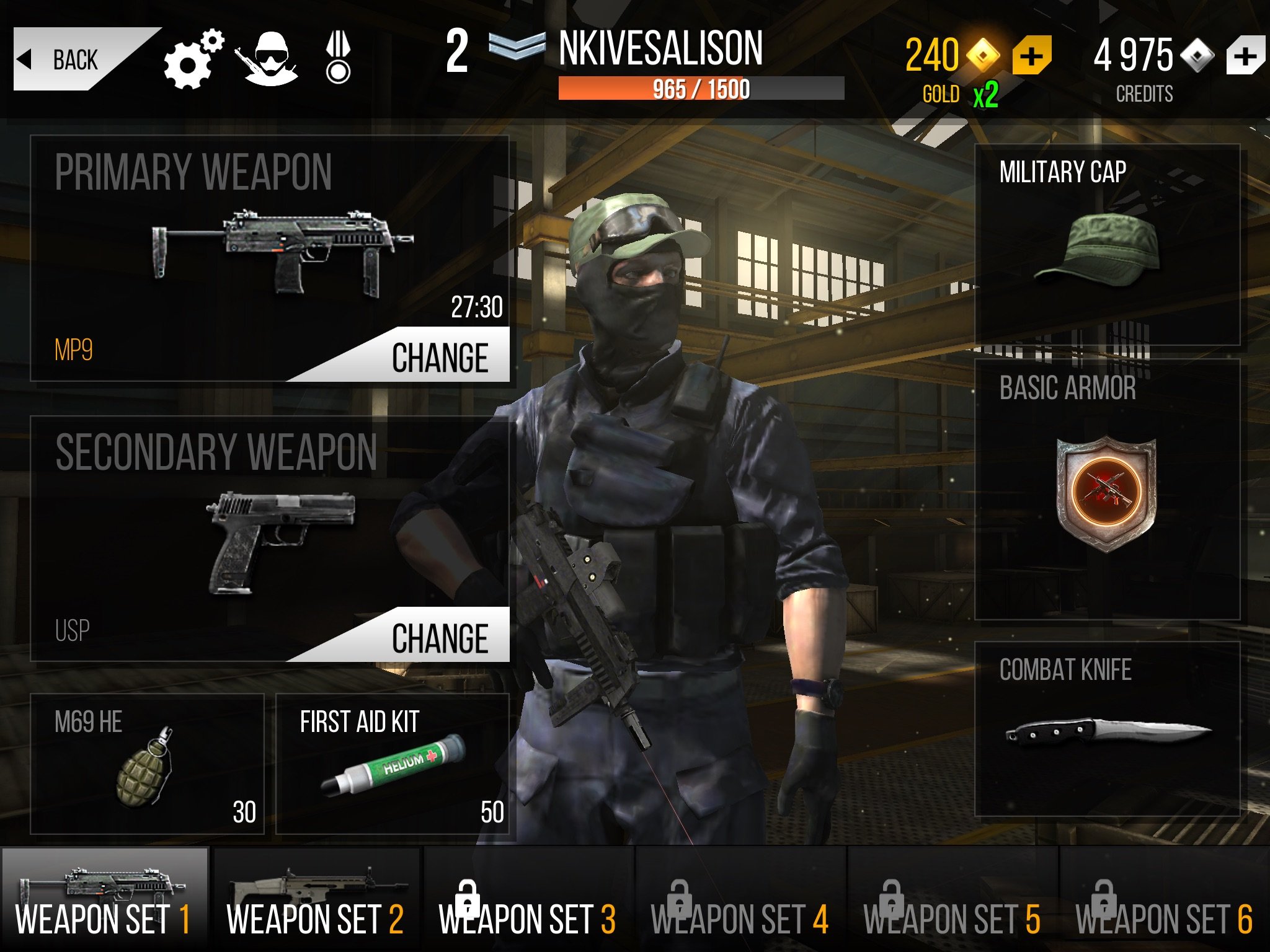 This array of game modes is complimented by an almost dizzying selection of weapons, customizations and armor. As a free-to-play game, if you want to buy the best weapons on offer it’s going to cost you as you’ll either need to quit your job to play full time or splash out a bit of cash, and this is where Modern Strike Online draws much of its criticism.

However, there are a few things to consider here. Firstly, it is totally possible to have an amazing experience without spending a dime. Secondly, battle chests, reward points and the gold you’ll naturally accumulate mean that you’ll often that the ability to play with top-grade weaponry on a rental basis. Thirdly, the matching system means you’ll almost always be playing against people packing similar firepower. Finally, Modern Strike Online at its best offers an experience that rivals most console FPS games for free. The occasional in-app purchase sends a message to the developers that you appreciate the effort that goes into a game of this scale and makes future improvements (maps, server capacity, game modes) possible. 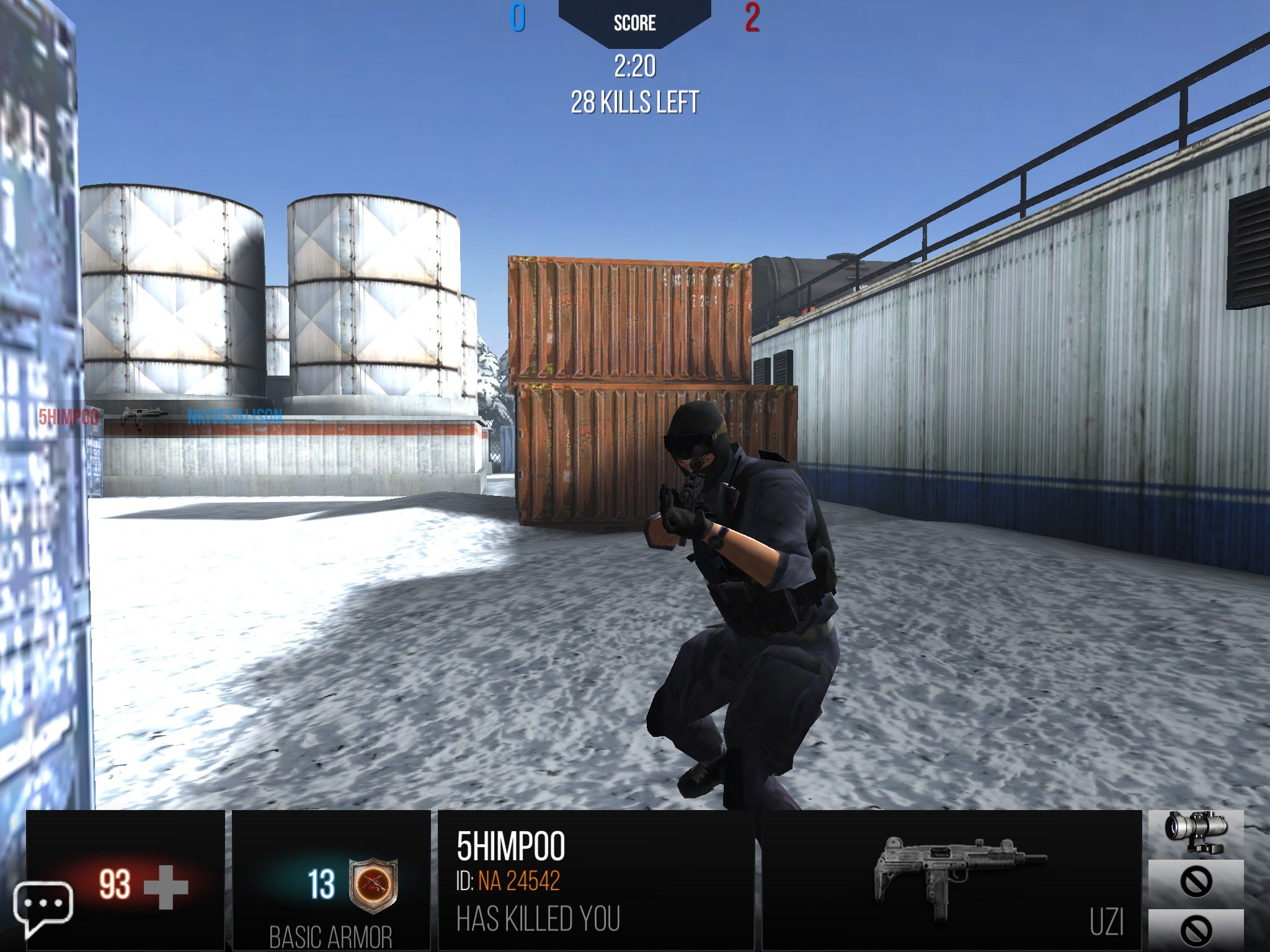 It’s also worth noting that Modern Strike Online doesn’t use a limited energy model. Most of the time this is great. Sometimes less so, because there’s a persistent likelihood that you’ll log in for one game and lose an entire night if there’s no external force making you stop. To call a game ‘addicting’ has become something of a cliché, but in this case it’s the most accurate descriptor.

If you’re interested in either the first-person shooter genre or high quality mobile games of any genre, Modern Strike Online is a rare must play. It might play better on Android than iOS right now, but that almost certainly won’t be the case for long. Even with its server issues, Modern Strike Online for iOS threatens to blow other mobile FPS shooters straight out of the water.

Epic Little War Game Review: Struggles to Live up to Its Name