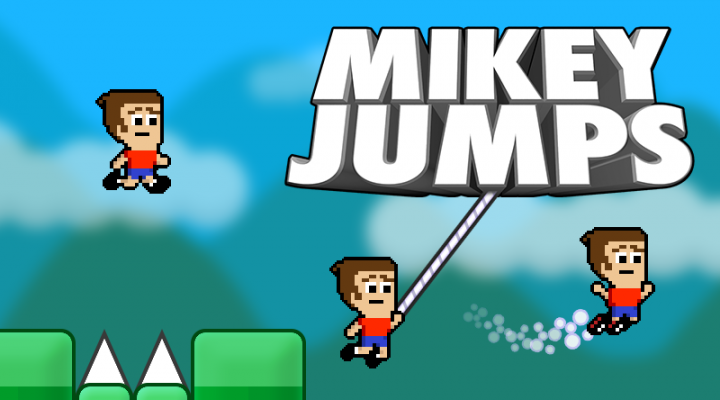 My hands-on experience with the Mikey trilogy is somewhat limited. But even though I’ve yet to play Mikey Shorts or Mikey Boots, I still think it’s pretty plain to see how Mikey Jumps is a love letter to the fans. Platforming, rope swinging, rocket boot flying, coin collecting, and even hats – it’s all here, and it’s all spectacular.

Levels in Mikey Jumps are incredibly short – each one is visible on a single screen. You simply have to guide Mikey to the big ol’ star at the end. The catch (because there’s always a catch) is that Mikey doesn’t stop running forward. That’s right, it’s an auto-runner! 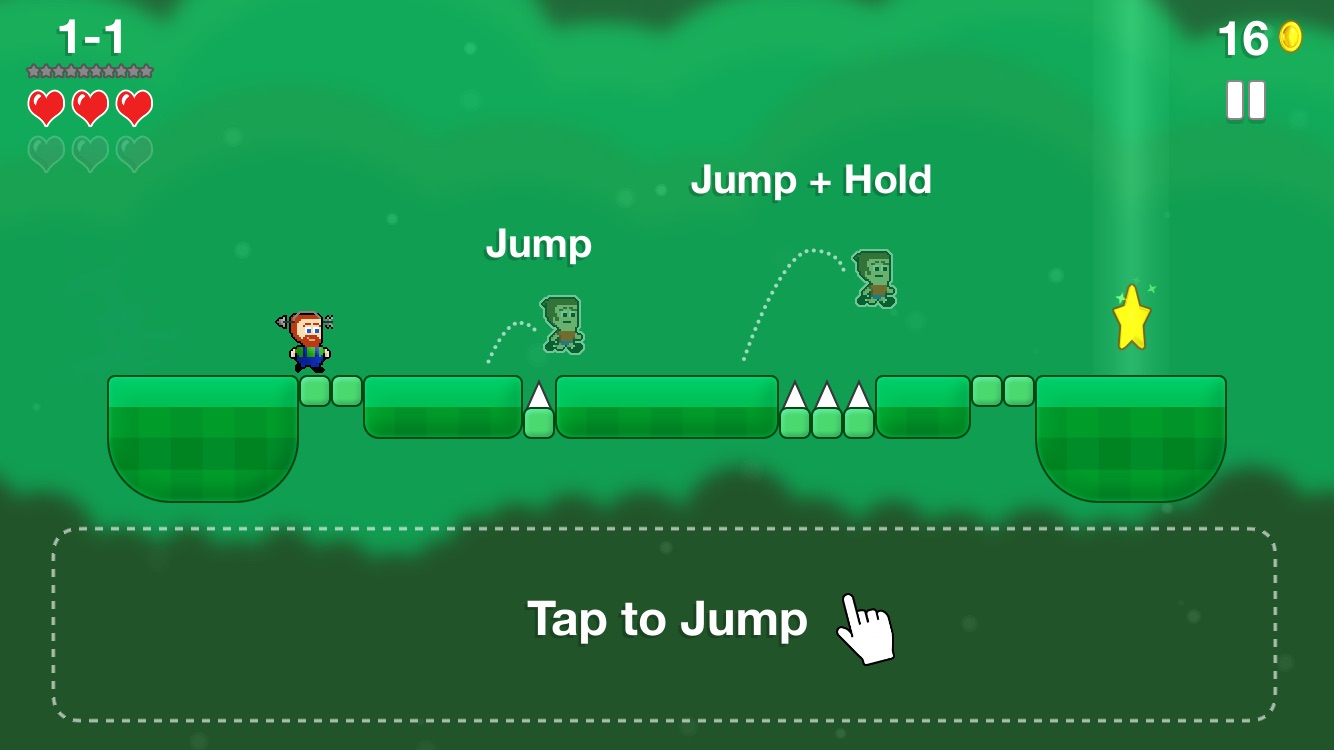 Then there’s the way Mikey Jumps incorporates the main mechanics from all three previous Mikey games. Tapping the screen at any time will cause Mikey to jump different heights depending on how long you hold down. Tapping the screen when Mikey is close to an anchor point will cause him to fire out a grappling hook, while letting go of the screen will release the hook. Tapping and holding the screen after Mikey grabs a rocket boot power-up causes him to fly. Like I said, it’s the Mikey Trilogy all smushed together into one game.

You’d think having all of these different elements would make Mikey Jumps a confusing mess, but it actually works incredibly well. Since each level fits on a single screen, it’s fairly easy to see what elements are present — even when you just have a brief second before Mikey takes off running towards almost certain doom (again). Segues between gameplay elements are also practically flawless, with the distances needed for things to contextually activate (such as grapple points) being pretty much exactly what you’d expect them to be. 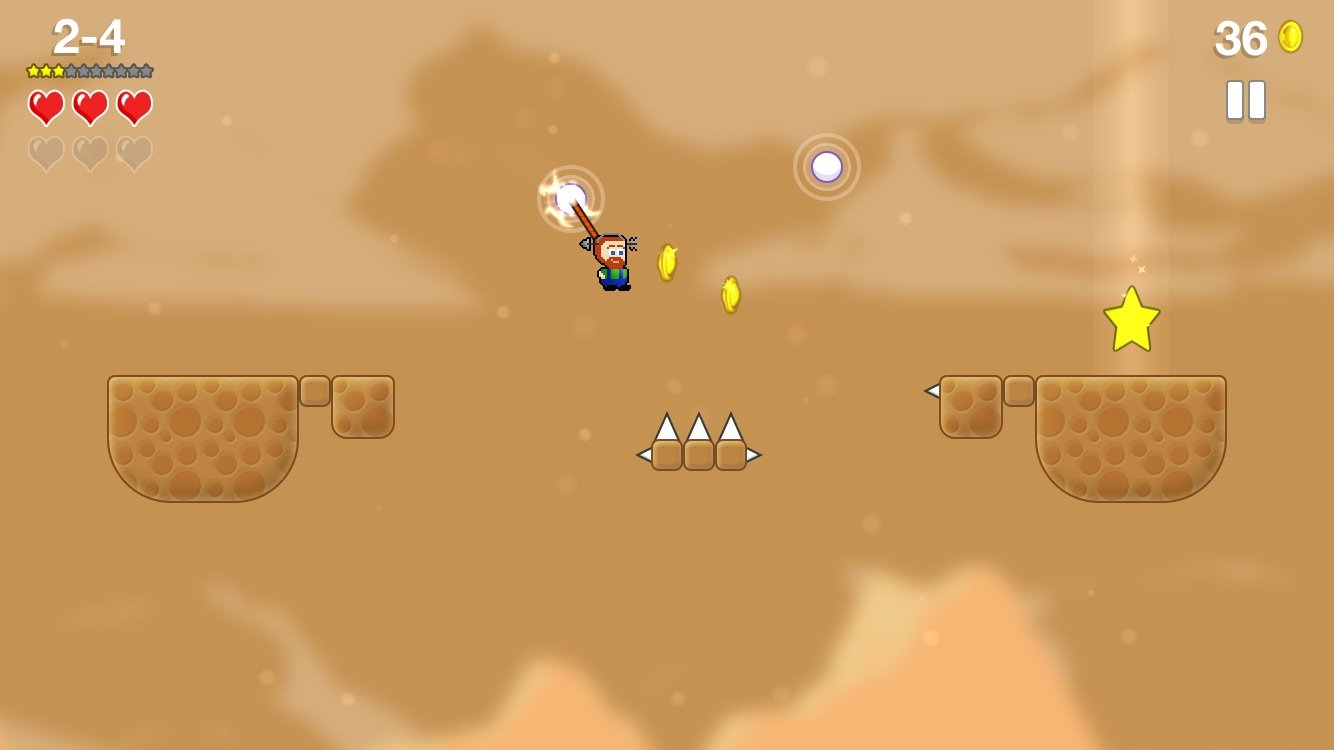 This doesn’t mean it’s easy, though. Goodness no. Mikey Jumps is pretty darned tough. The beginning of each level set counts as a checkpoint, so you don’t have to start over from the very beginning every time you run out of lives, but that’s a small comfort. The tiny self-contained stages go from simple to brutal in a hurry, with all sorts of insidiously clever combinations of swinging and jumping and flying and not crashing into spikes/enemies/lava/etc. Of course, that struggle makes reaching the next checkpoint feel all the more satisfying.

I can’t even complain about the random character customization option unlocks, really. Sure it may take a while to get specific items (unless you’re impatient and pay to unlock full sets), but all the different bits and pieces are shared across each of the six different characters, and all of those characters are available from the start. Heck, you even earn a bunch of coins regularly whether you play or not (it’s on a timer), and a single spin of the slot machine gives you three different items to choose from. My only real concern is that I’m not sure how BeaverTap will end up making any money — this is an exceptional game, and its creator deserves to have that rewarded. 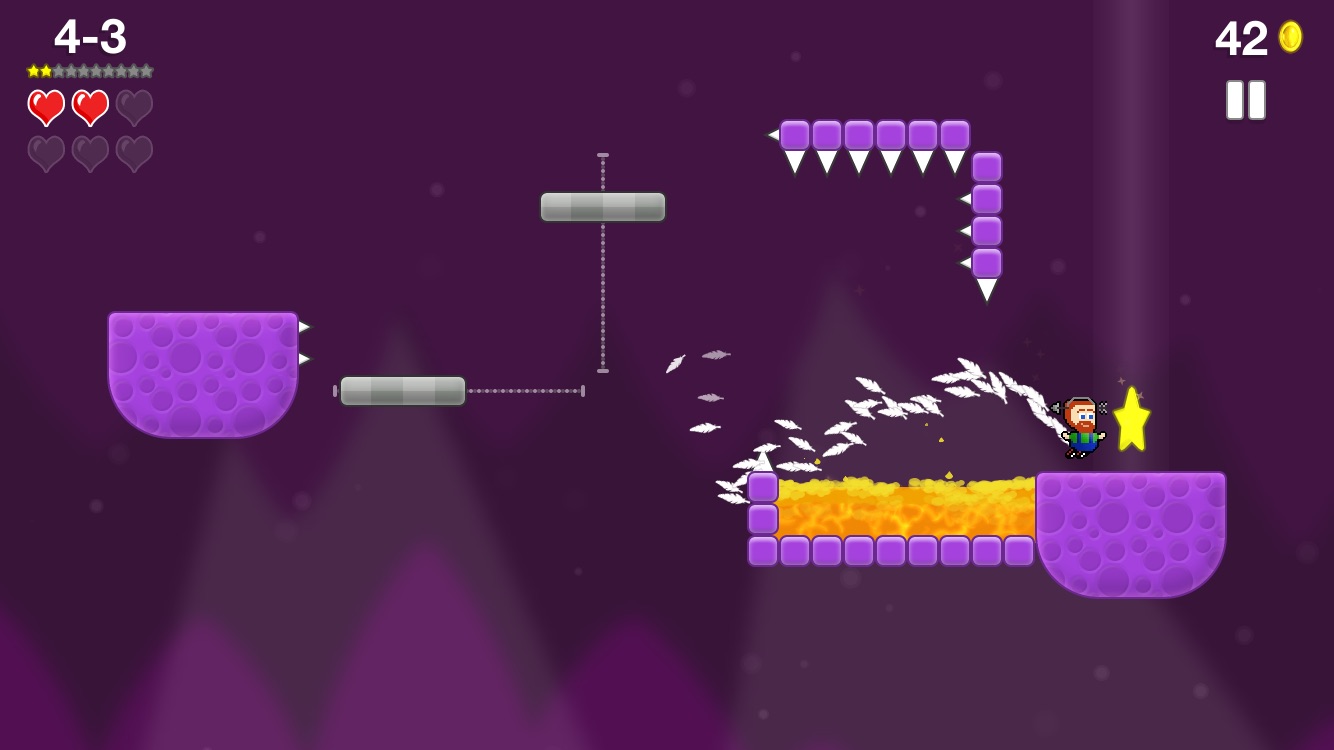 Mikey Jumps is a great mobile action game, whether you’ve never heard of Mikey before or if you’re a long-time fan. The game controls as well as you could want, the levels are designed to be the good kind of a pain in the butt, there’s lots to unlock. It’s just straight-up fun. Give it a try, and I’m fairly certain you’ll have a blast.