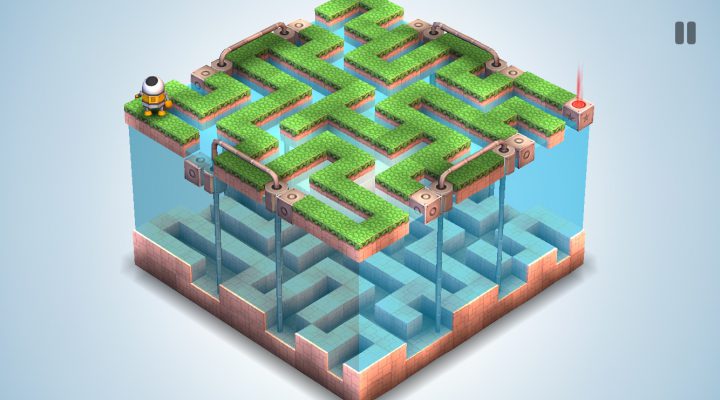 Want to change it up? Make you own levels or play levels from other people

Early puzzles can be tedious once you figure out the mechanic

No tips on making your own puzzle might make a blank slate intimidating (but try anyway!)

Games can be well made. Games can embody the love of their creators. It is a rare treat to play a game where the design is both expertly crafted and the fierce love behind the game is imbued into its every aspect. Mekorama, the newest robot puzzler from Odd Bot Out’s solo developer Martin Magni, is such an experience.

The premise behind Mekorama is that you’re helping guide an adorable lost robot home, through a series of 50 “tiny mechanical dioramas.” Each diorama can be spun 360 degrees to be viewed from each side as you lead your robot through the puzzle. The path you must take toward your destination is made up of blocks, some passable, some not. To move along the path, simply tap on the block you’re trying to move towards. If the direct path is open, your robot will waddle along to your destination. If the path is obstructed, you’ll need to figure out your way around, under, or through. Early levels are somewhat procedural, in that once you figure out the mechanic, you just need to keep doing that thing to make it through. But as you progress, the levels become more complicated, more maze-like, and interesting mechanics start to reveal themselves. 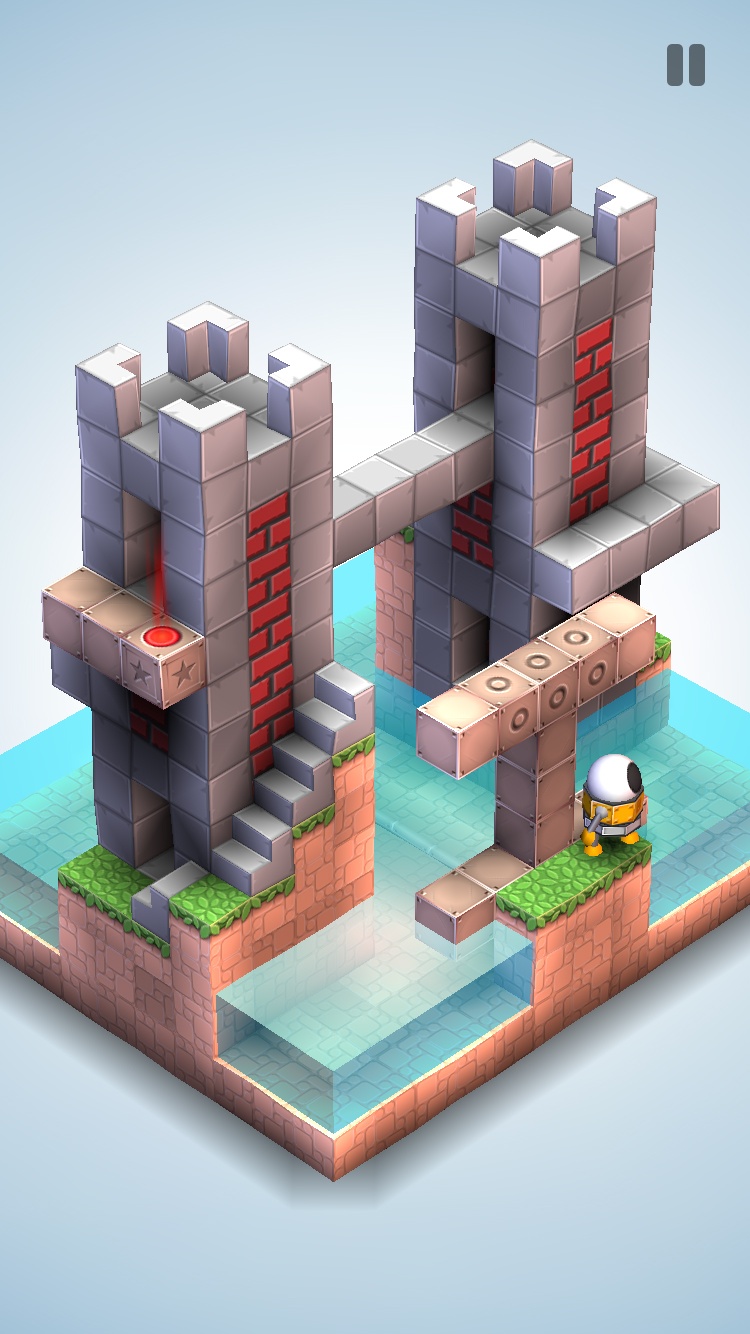 The solitary, yet whimsical tone of Mekorama is similar to Monument Valley and the 3D puzzles will feel familiar. But the aesthetics are more industrial, with brick and mortar, rusty metal components, and yellow striped safety tape. Undoubtedly, fans of Monument Valley will enjoy Mekorama while falling in love with its robotic hero.

Magni’s robot is a virtuosic study in “secondary animation,” which is affective movement that is added to an object as a result of its primary motion such as walking from one point to another. The purpose of secondary animation is to make your object in motion feel more nuanced, realistic or emotive. Consider that when you walk, you place one foot in front of another and then your secondary motion might be swinging your arms; if that action were animated for a person with only their feet moving, it would feel less realistic than if their arms were also swinging.

Mekorama’s robot has thoughtful, idiosyncratic motions added to almost every body part, each which is also effected by velocity, inertia and other physical forces. Hands flail and arms extend with a quick drop, feet shuffle while a paunchy metal belly eases forward and back with each step. The robot alone is worth watching as it moves through space and likely deserves its own animation series.

Another compelling feature of the game is the ability to create your own levels with modular components in a style that will be familiar to Minecraft fans. At this time, finding these player-created levels happens outside of the game through Mekorama’s official social media pages, but actually getting the level into the game is seamlessly easy.

There aren’t any tips on making your levels so you’re just going to have to jump in, but it’s worth it. Allowing players the ability to show off their own puzzle-making skills and share their designs has the potential to open the game in exciting ways much more impactful than a simple exported screen shot can be. You become part of the game in a genuinely meaningful way. Mekorama’s intuitive creation tool simplifies and democratizes the design process in an inspiring way, while also showing how challenging puzzle-making can be. I do hope more designers take a page from Magni’s book and figure out how to include this type of feature into their own games. 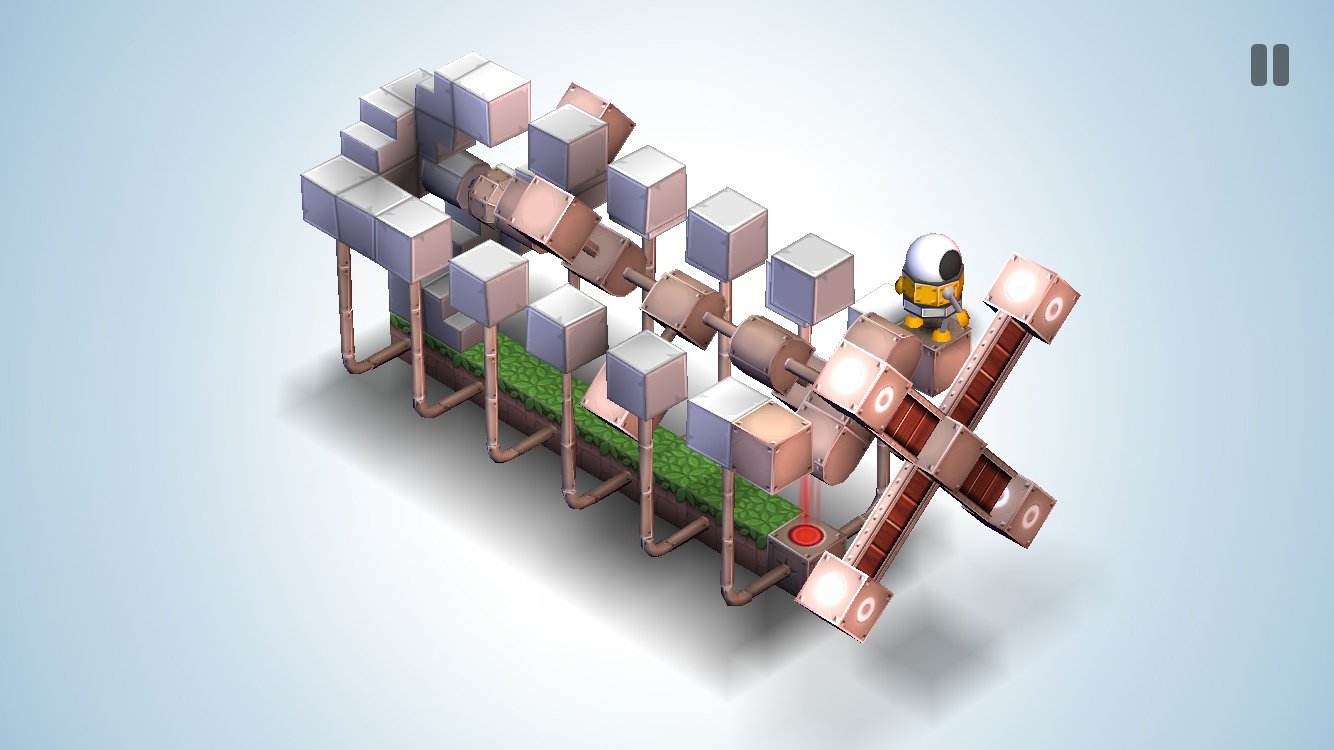 Mekorama is entirely “pay what you want;” if you want to contribute to the game, you can make an IAP that functions as your payment. But nothing is locked and there are no energy or life systems to keep you from playing as much as you’d like, even if you choose not to pay anything. I’m a big fan of optional hint systems in puzzle games and Mekorama does include one- though you’ll need to make a purchase to access them. This is one of the best, most fair monetization systems I’ve seen in a game. If you care enough to want a hint, then it stands to reason that the experience is valuable to you and is worthy of a contribution.

Just as our tiny robot hero is made up of lovingly crafted bits and bytes, Mekorama is a composite of finely designed puzzles, expert animation, and thoughtful player engagement that makes it a true pleasure to play. Consider this a must play.