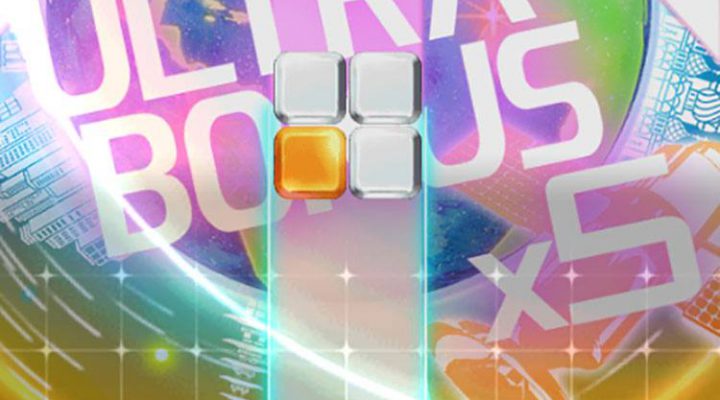 I picked up Sony’s first handheld console on launch day in 2004. Along with it, I treated myself to two games. Metal Gear Ac!d was one. A strange little puzzle game I’d never heard of was the other.

Within moments, I was in rhythm puzzle heaven.

I’ve been a fan of Lumines for a long time. From the original PlayStation Portable classic right through to 2012’s Electronic Symphony, the meshing of music and falling blocks has kept me completely entranced. It’s not a complicated concept by any stretch, but there’s something about the zen-like gameplay merging with a panicked need to make combos that has kept me hooked for more than a decade. 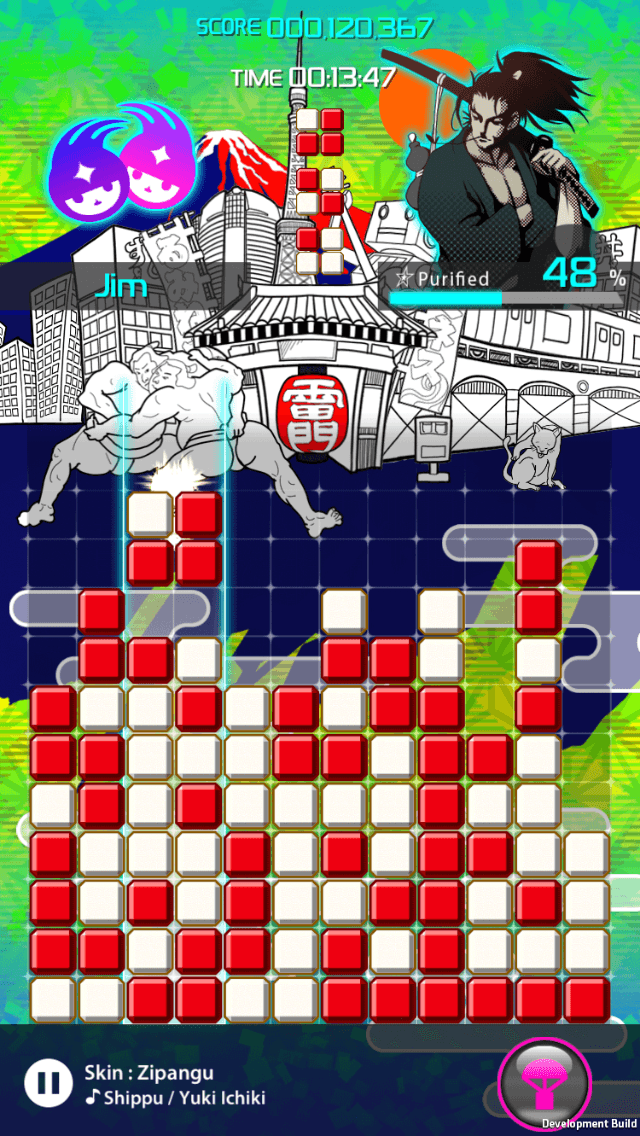 With that in mind, you might be surprised to learn that I was a little trepidatious about Lumines new mobile entry. Yes, I gladly gushed about it like a fanboy when it was announced, but the nearer we got to release, the more my doubts started to set in. The last Lumines on mobile was kind of a mess. And while Puzzle & Music’s portrait mode seemed promising from a comfort perspective, wouldn’t a shorter timeline and a taller pit make the game somehow simultaneously tougher and easier, breaking the core mechanic?

Lumines Puzzle & Music is now available, and I am pleased to report that if you shared in these worries, you can safely breathe a sigh of relief. It took a few plays to really find my groove, but once I did, it wasn’t hard to see how well Lumines Puzzle & Music recreates that perfect balance of anxiety and chill on your mobile device.

For the uninitiated, here’s how Lumines works: Square blocks (made up of four smaller blocks) are dropped from the sky above, and need to be placed by the player on the board below. Each smaller block will show one of two colors, and the goal is to make new larger squares (and rectangles) by making colors match.

The catch — and here’s where it gets really tricky — is that these squares are cleared away by a line that moves across the screen in time with the music. Your goal then isn’t just to make bigger squares, but to make as many bigger squares as you can before the time line sweeps through again and clears them all out, netting you a ton of points in the process. 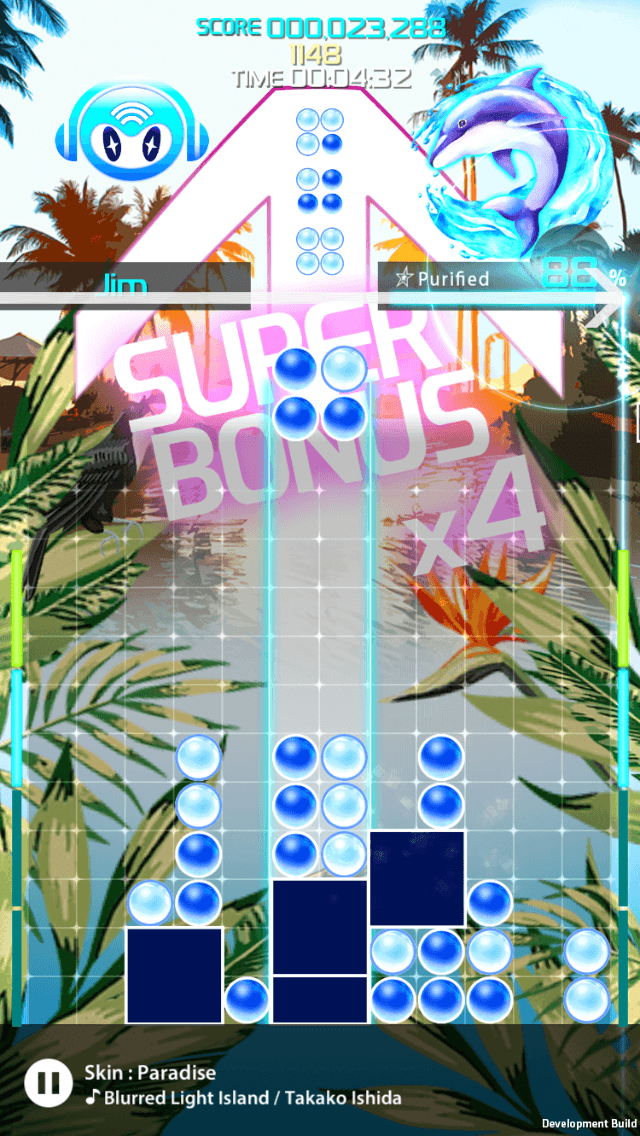 There are other little twists, like special blocks that can shuffle the board or remove all pieces of the same color that are touching, and unlockable avatars that give you special powerups if equipped, but these are really just icing on an otherwise delicious cake.

In other Lumines games, all of this gameplay is controlled by the d-pad on a physical controller. Here though, everything is touch-based. It takes a little getting used to — and you may find that your fingers are more prone to error than the binary inputs on a controller — but you’ll find everything to be wonderfully responsive and simple to do. Swiping back and forth moves a block, swiping down places it, and tapping rotates. It’s all natural, intuitive stuff. 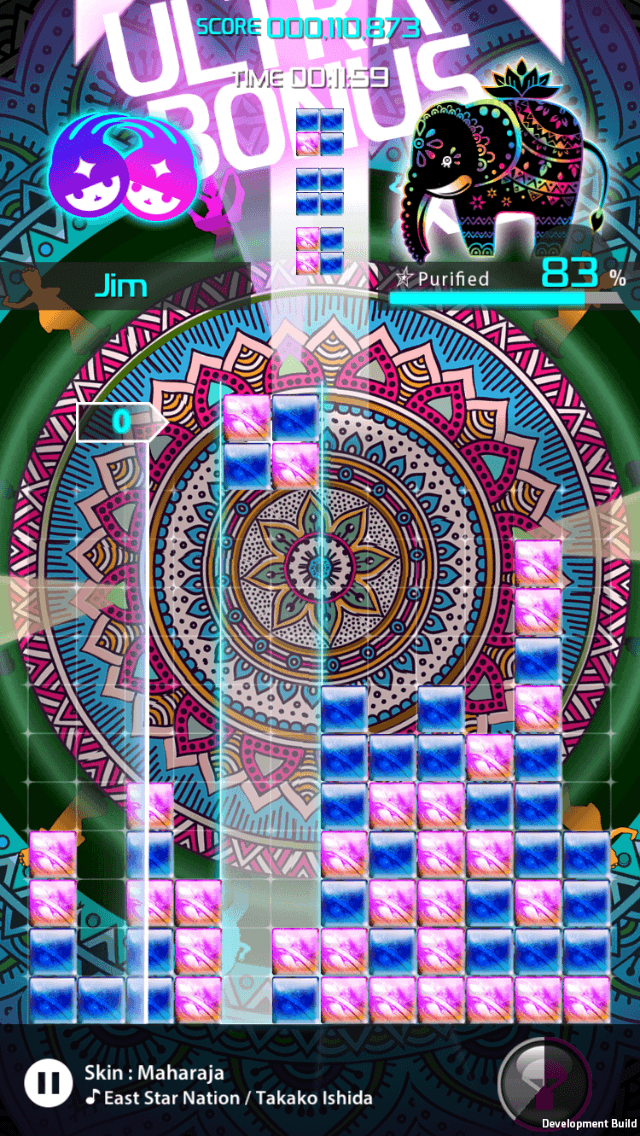 Beyond the gameplay itself, the setup is a little weird this time around, though not detrimental to the overall experience. Rather than just jumping in to play, you’ll have to work through Easy, then Normal, then Hard modes before you can unlock Endless play. And each “difficulty” isn’t really distinct or more difficult, but instead locks more of the game behind a gate. So while “easy” puts you through the game’s first three stages, “normal” puts you through the first five. You’ll be replaying stages a lot because of this, but then again, you’d be doing that anyway. Repetition is kind of the Lumines way.

Once you’ve unlocked these stages, you can access them individually at any time and play them as much as you want, so there’s still a way to play “endless” without unlocking the official mode. 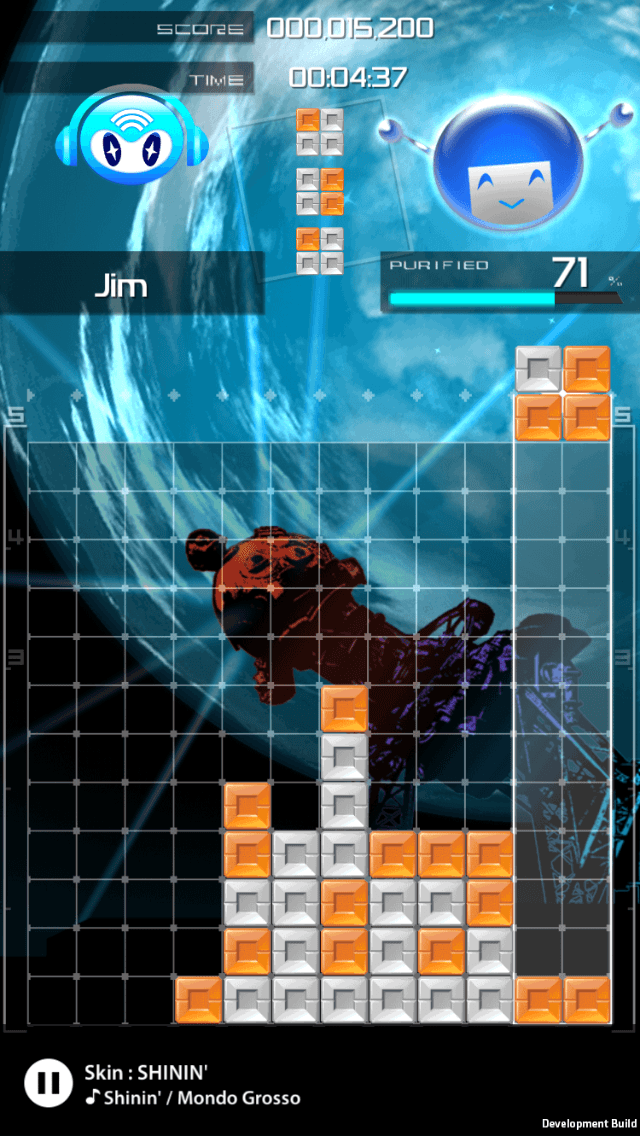 In addition to the new songs and stages of Puzzle & Music, there’s a second “album” featuring content from the PSP original, but remixed for mobile play. It’s a smart choice that adds more variety to the package, and leaves us hopeful that we’ll see additional albums added down the road, either as free updates or paid DLC.

Lumines Puzzle & Music isn’t your typical mobile puzzle game. You’re going to need a pair of headphones, a lot of time, and a willingness to get lost in trance. If you’re comfortable with that proposition — and if you’ve ever played a Lumines in the past, you know you are — Lumines Puzzle & Music is everything you’re hoping for.