Jillian’s Backlog 03: A Journey Through the Games We’ve Missed 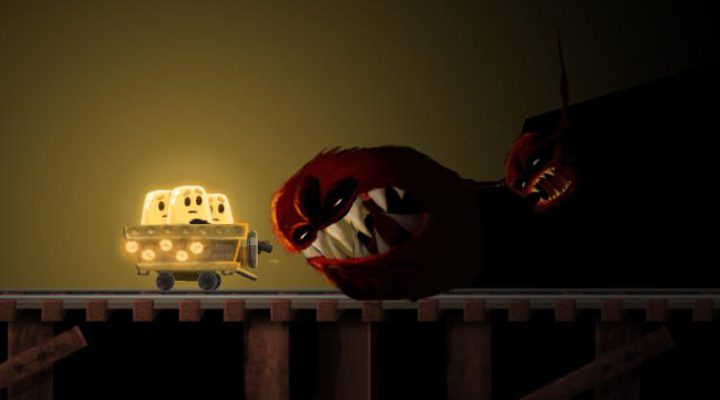 This is week three of my ongoing attempt to slowly play through my massive mobile backlog, and it was a tough one. A ridiculous amount of amazing games came out this week, which merely adds to my never-ending to-play list. On top of that, I got completely sucked into a game that can’t even be included in this round-up because we’ve already reviewed it here at Gamezebo…but if you haven’t played Hammer Bomb yet, consider it an honorary Backlog 03 title.

The other five games below fit my very simple criteria: we have not written about these before, and I really enjoyed playing them. Hopefully you will, too. 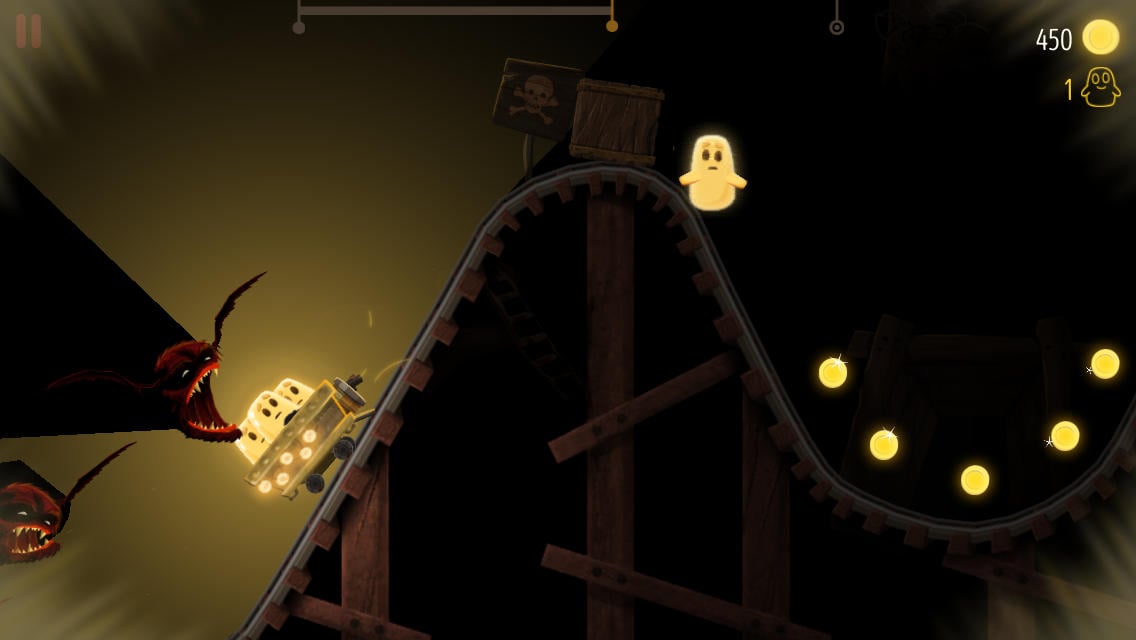 Hopeless 2: Cave Escape is the most recent release in Upopa Entertainment’s Hopeless series that pits luminous, well-armed blobs against hordes of blobthirsty monsters. Most of the Hopeless games feature the blob stars standing in place in a dark room as enemies close in on them from all sides, asking the player to quickly tap the endless wave of incoming monsters to repel them. Hopeless 2 changes up this formula by putting the blobs in a minecart as it tears through the underground world, careening towards the exit and eventual escape on each finite level.

Monsters still emerge from the surrounding darkness and savable blob buddies still appear randomly as well, adding to your total heroes and the ambient light that exudes from them. But the fact that they are moving forward toward a destination gives a greater sense of progress to each level and makes your success—or failure—more clear. The minecart track also allows for a wider variety to each level, with hills reducing monster visibility and dangling boxes offering potential prizes—if you shoot them open before driving beneath them. All of the Hopeless games are worth a download, but Cave Escape grabbed me more than any of the other entries while still maintaining the wonderfully tense yet jokingly over-the-top mood of the entire series. 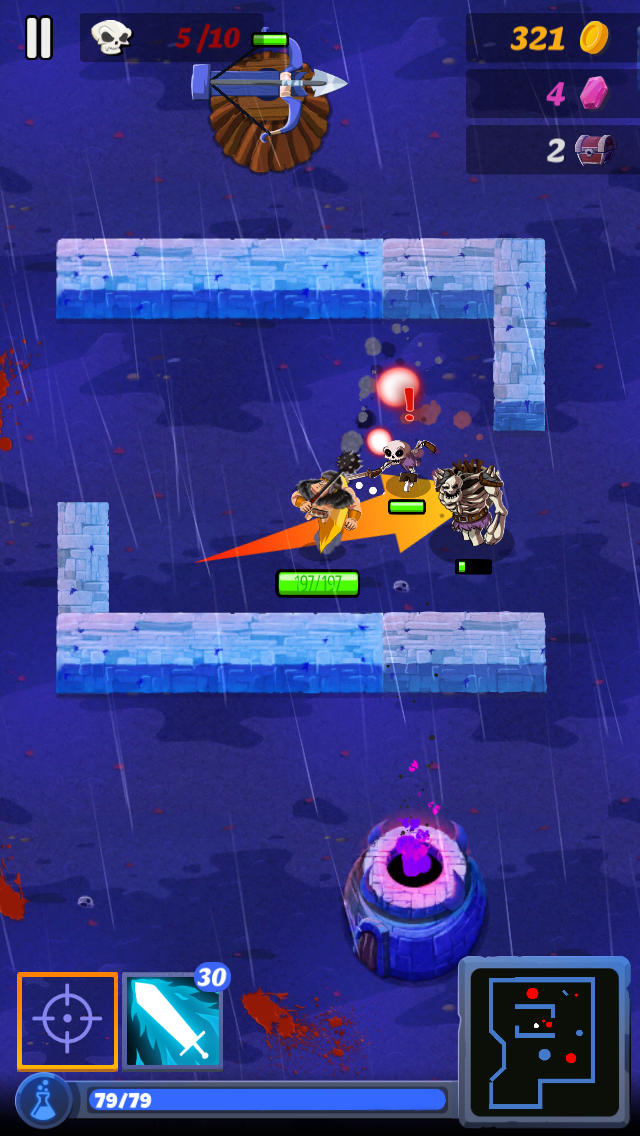 Barbaric: The Golden Hero is also developed by Upopa. While I’d rather share as many different developers’ work as possible in these lists, part of exhaustive backlogging is checking out the back catalogue of developers you’ve already discovered and enjoy. Barbaric plays nothing like any of the Hopeless series, instead using a slingshot mechanic to propel your lusciously-locked hero through pinball-esque boards of baddies. When shot, the hero curls into a ball and hedgehog-rolls into enemies, bouncing off them and causing damage. He ricochets around the board at surprising speeds, causing collateral damage to any nearby crates and terrain he collides with, which contain loot and power-ups.

Battles are real-time with enemies coming at you as you bounce around: you can re-shoot your barbarian ball at any time by tapping and pulling back, which slows the hero and everything around him à la bullet time. This core mechanic is extremely fast-paced and tons of fun, but Barbaric also throws in a great sense of progression via RPG aspects with different pieces of equipment (that change the hero’s appearance); upgradable stats; and special powers he can activate in battle, such as the ability to slice through enemies instead of bouncing off them.

While early stages are mostly manic flinging with no real precision required, later stages will pit your hero against tons of obstacles and enemies, requiring more careful aiming to curve around walls and dodge incoming fireballs—but still rewarding that precision with crazy bounce attacks and flying skeletons. 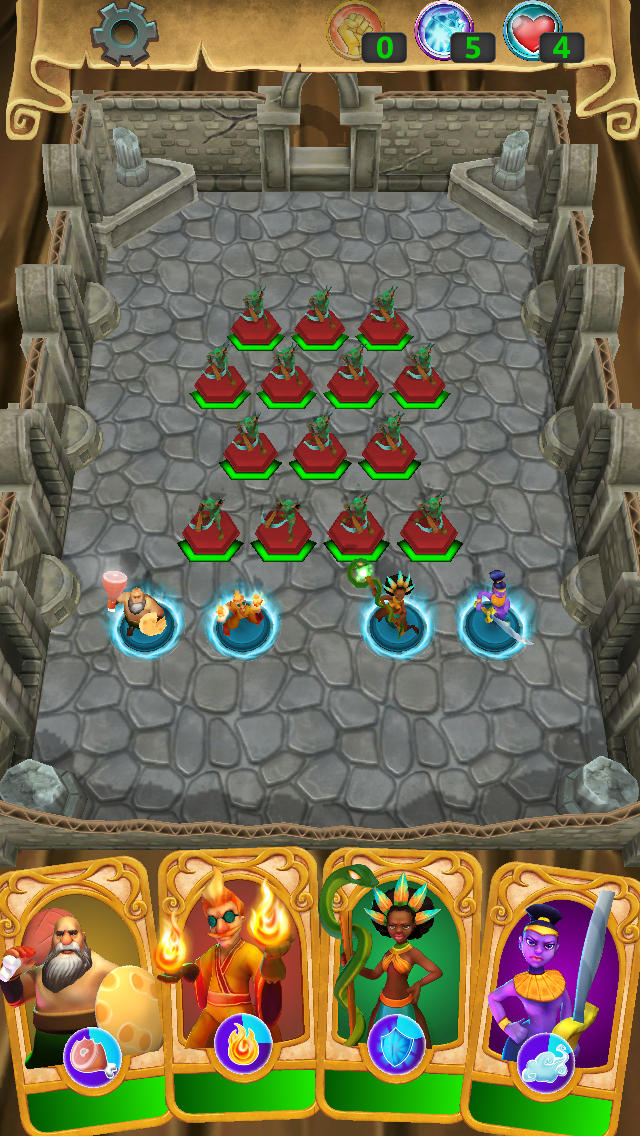 Flick Heroes is also a sliding battleground where good and evil fight by colliding into one another. While it should appeal to anyone interested in Barbaric, it also feels quite different, using a party of heroes and turn-based attacks to allow slightly more strategic sliding. All of the characters in Flick Heroes are designed like collectible figurines attached to a circular, flat base. Instead of pulling back to slingshot them around the fairly contained levels, you simply flick them in the direction you want with the appropriate amount of force. A very light flick will send them a short distance while a fast, long flick will send them flying across the room.

It feels a lot like lining your Amiibo up on opposite ends of a table and then launching them at one another, complete with the plastic ‘thunk’ing sound that would elicit. Each hero has their own passive and active abilities which affect their style in battle: the Ham Knight is big and burly, bouncing aggressively against enemies while the Genie uses her giant sword to slice straight through ranks. To make things even more interesting, many of the heroes affect their teammates when flicked into each other: the Shaman heals her team if she runs into one of them while the Pyro Mage sets their weapons ablaze to do bonus damage.

While these effects are activated even on accidental bounces, you’ll often need to decide between intentionally sliding your heroes into one another and potentially wasting an attack or flinging them at the enemy and hoping you get a collateral bonus bounce as well. There’s a surprising amount of strategy for a game that seems like just random flicking at first glance, but there’s plenty of wild haphazard toy-smashing, too. 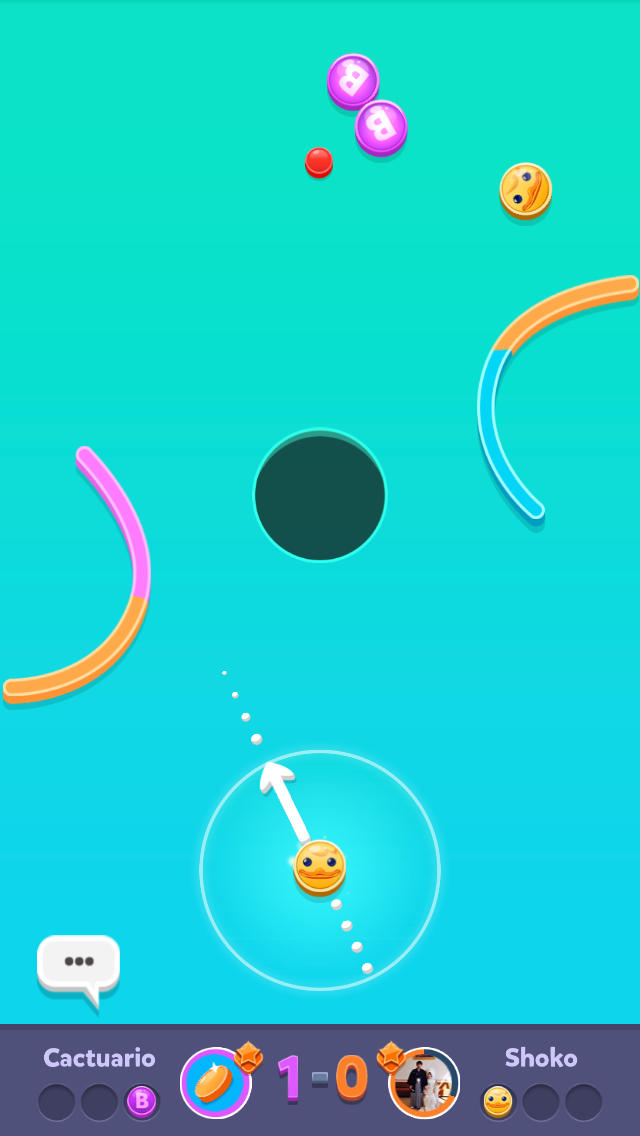 Bool rounds out the week’s coincidental focus on competitive sliding with a strictly multiplayer twist on bocce. The title, and gameplay, is a mashup of bocce and pool, challenging players to slide their three pucks as close as possible to the tiny red target ball. Like Barbaric, sliding is done with a pull-back slingshot motion, with a long pull resulting in fast, distant slides and a short pull sending your puck sliding only a slight distance.

The edges of the screen and environment can be bounced off of, allowing you to ricochet around corners to land near the sometimes walled-in target. Matches are head-to-head games in which two players take turns aiming their pucks. This means that after the first slide, players can use their shots to knock their opponents’ pucks away from the target ball—or, sometimes accidentally, closer to it. A point is awarded to the puck that is closest to the red ball after all six pucks have been shot, as well as any of that player’s other pucks that are closer than the opponent’s. The first player to three points wins the match, so you can snag victory in a single round blow-out, or matches can stretch across multiple short rounds where points are traded off.

Bool’s smooth bocce gameplay and still-active multiplayer are enough to recommend it, but it gains extra points for tons of stage variety—both in layouts and obstacles, such as poker chips or cheese—as well as the ability to unlock different types of pucks with both aesthetic and mechanical differences, like higher speed or greater weight. My only complaint is that Bool is online-only with no single-player or even “practice” options, so new players can easily find themselves overwhelmed by experienced Bool sharks with thousands of victories under their belt and expert sliding skills—but the game is fun enough that I never mind taking a loss and trying again. 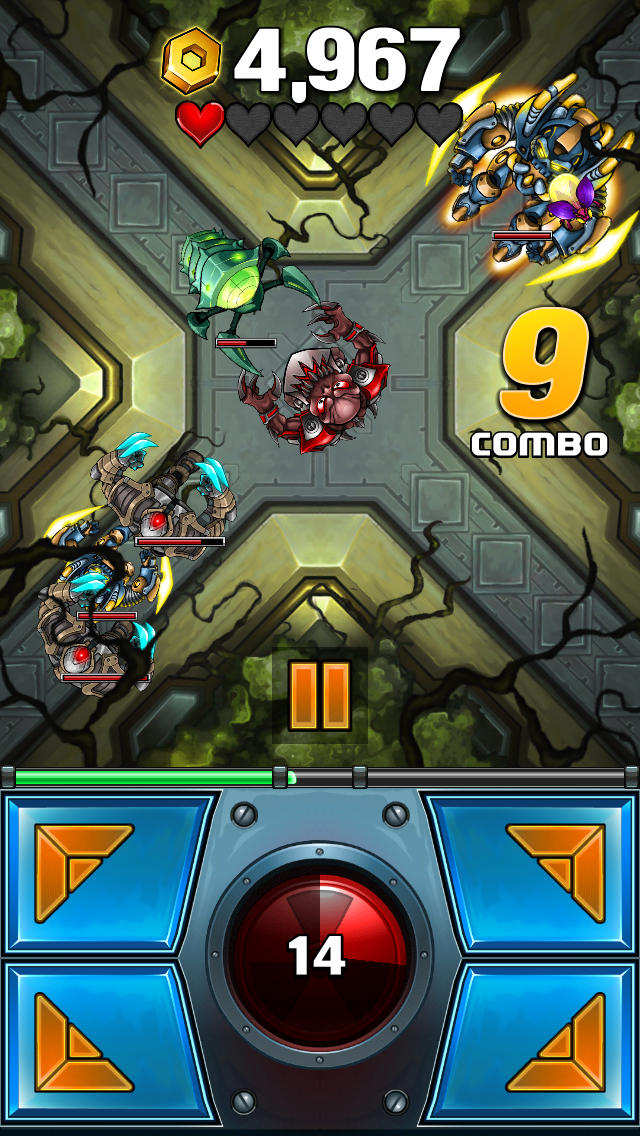 BioBeasts: Mutate & Destroy is a surprisingly engaging twist on the directional swipe-based gameplay of games like Swipe Me Out. While at first glance it seems like you’re simply tapping the correct button at the correct time—right when an enemy comes at you from the right, left when an attack hits from the left—BioBeasts effectively combines a variety of attack patterns with strategic upgrades to create an experience that requires both fast-paced reactions as well as pre-planning. Your goal is to help your mutant creature escape the lab he was created in, fending off waves of robotic and monstrous security along the way. He stands in place while enemies stream in from four different directions, making their way towards him in the center. Tapping the directional buttons at the bottom of the HUD will cause him to lash out and attack that quadrant, but your creature has a limited reach and won’t hit anyone that’s too far away. This means you have to let enemies get relatively close before you can dispatch them, putting yourself at risk of being hit, too.

Luckily, you have upgrades available that will weaken or even kill enemies before they reach the center. After each wave, you’re given a choice between three random mutations: these range from flat stat upgrades for strength or knockback to mines placed at the end of each path to patrolling poisonous bug partners. These mutations stay with you as long as you survive, building up your beast’s defenses so he can survive the ever-increasing onslaught of enemies with new baddies and attack patterns introduced with each wave. Once you die, you lose all of these bonuses, but you’re able to upgrade mutations to make them stronger and unlock new ones that might show up in-game, as well as equip a few from the very beginning. It’s an interesting combination of roguelike upgrades, tower defense preparation, and arcade twitch gameplay that’s hard to put down.