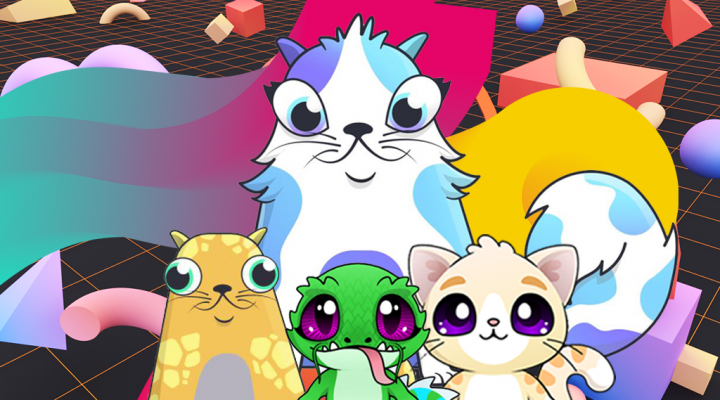 Before the mainstream adoption of blockchain, decentralized games were impossible. Now they’re unstoppable.

In case you’re unclear about the concept, decentralized gaming allows you to do useful stuff like own – fully, uniquely own, as if they were physical objects in the real world – the items that you obtain in games, and collect assets that can be used across multiple games. It’s pretty cool.

Blockchain Cuties is exactly what it sounds like: a crypto game in which you collect adorable, impossibly large-eyed kittens, bear cubs, lizards, puppies, and so on. It’s a bit like collecting LOL Pets, but about a million times cooler and without the plastic waste. Unsurprisingly, Blockchain Cuties has one of the most active communities in the blockchain gaming world.

Okay, so it’s not the catchiest title in the world, but Decentraland is an incredibly interesting and ambitious project.

You can think of it as a blockchain descendant of Second Life, the product that underlined the promise of virtual worlds on PC in the noughties. Naturally, Decentraland runs on the blockchain, meaning your virtual possessions will be almost as palpable as your real ones. You can even access this world in VR.

Not to get all Ready Player One on you, but Chainbreakers is a VR strategy-RPG developed exclusively for the Decentraland universe. That means the only way to boot it up is to first boot up Decentraland.

It’s the very first, too, so you’ll be able to play Chainbreakers as soon as Decentraland emerges from its alpha and beta phases.

If you pay any attention to blockchain and cryptocurrencies you’ll be well aware of Enjin already. In fact, 19 million gamers currently use the Enjin network to build websites for clans and guilds in games like Minecraft, World of Warcraft, and other titles not ending in “craft”.

Having hit headlines when a rare CryptoKitty sold for more than $100,000, CryptoKitties is perhaps the most famous decentralized gaming project in the world, with 14,000 daily users at its peak. It sees players collecting kitties and, if they’re lucky, selling them for enough money to buy a private island.

Try these 5 new mobile games this week, including Shaq Fu: A Legend Reborn