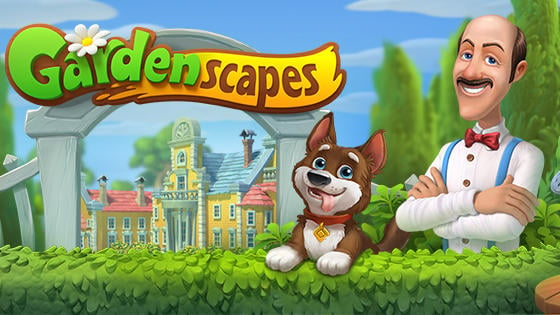 Both the garden-building simulation and match-3 levels are highly polished and engaging halves of an extremely fun whole.

Austin and his various visitors provide not only guidance and direction but support, humor, and companionship that bring your garden to life.

The garden is gorgeous and huge with tons of tasks to complete and personal touches to add, like choosing bench colors or flower types.

The match-3 stages offer significant challenges without feeling rigged by limiting the number of purchasable power-ups and focusing on items earned through skillful matching.

IAPs are only consumable, with no sort of permanent coin doubler or energy meter removal available.

Gardenscapes: New Acres is the fourth entry in Playrix’s long-running Gardenscapes series, but only the first to be designed specifically for mobile. Its three PC predecessors combined hidden object gameplay with a garden-decorating (or mansion-renovating) simulation that resulted in a relaxing pair of game modes that complemented each other in their sense of progress. New Acres has swapped the HOG portion of the series with match-3 levels more along the lines of the one-off Farmscapes, but the garden restoration is back and better than ever.

As in the previous Gardenscapes games, New Acres brings you to a mansion estate maintained by butler Austin and asks that you assist him in renovating the currently less-than-pristine grounds. Austin’s family has cared for this land his entire life, so he has fond memories of the area and the features it used to boast which have been withered by time and the loss of its last owner. Previously manicured lawns have become overgrown, sturdy trees have wilted, elegant statues have cracked and crumbled. It’s Austin’s dream to work together with you, the new owner, to return the estate to its former glory. 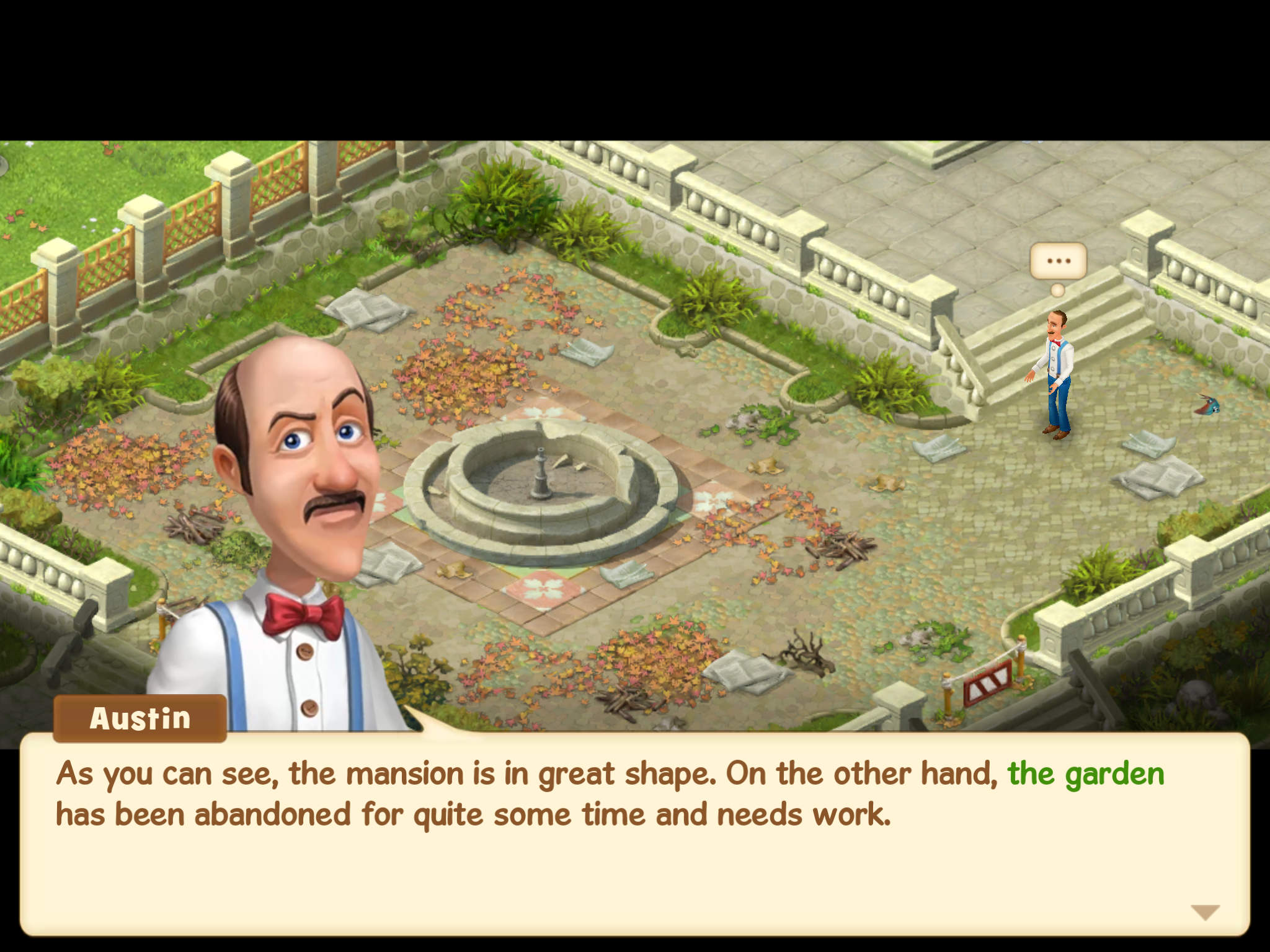 In order make this dream more attainable, Austin focuses your efforts on specific sections of the sprawling garden one at a time and breaks each section down into a series of tasks. Many of these tasks are obvious needs—plant shrubs, add benches, fix a broken fountain—but some will crop up as you progress. The fountain may flood while being fixed or a beetle infestation may be uncovered while patching the treehouse. Austin will update and add tasks as needed when new problems or ideas arise, creating a dynamic world packed with surprises both good and bad (but always satisfyingly resolvable).

This garden restoration is essentially a simple building or design simulator, and it’s supported by the other half of the game: the match-3 levels. In order to complete garden tasks, you’ll need to spend stars—simple tasks like installing benches will only require one star while more involved tasks, like building a treehouse, may require two or three. These stars are earned for beating match-3 levels—one star per level—and can be stored and saved up as a task-completing currency. 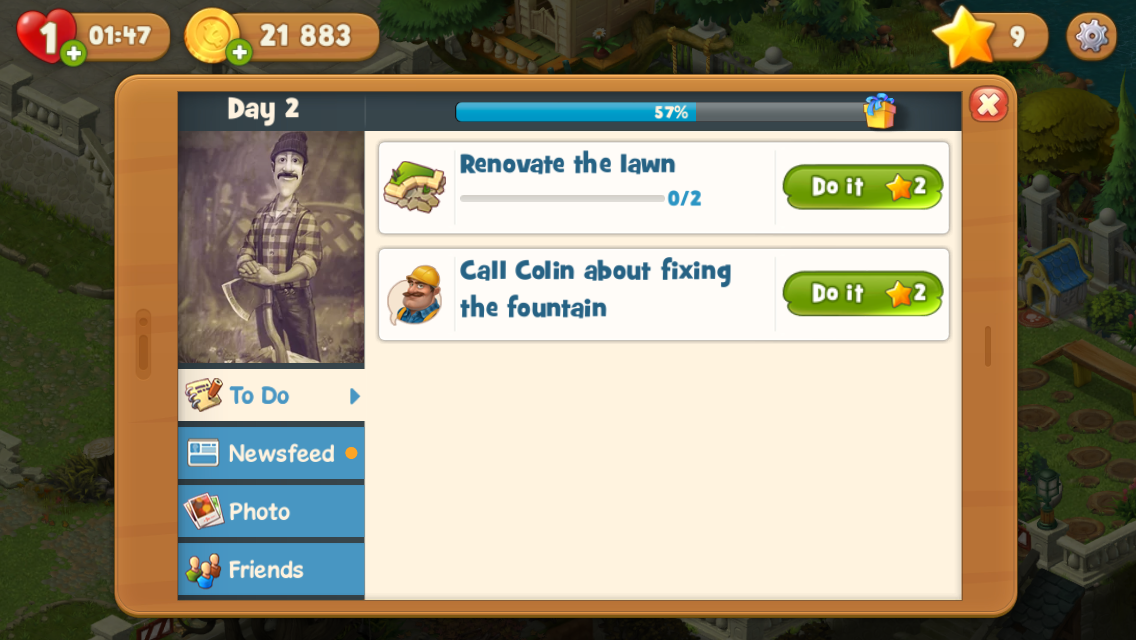 The match-3 levels themselves are fairly standard for the genre, with variously shaped boards challenging you to different tasks ranging from collecting a certain amount of tiles to dropping items from the top of the board to the bottom. Playrix has done a phenomenal job of keeping the match-3 stages on thematic point, however, by filling them with garden-appropriate tiles like leaves and apples, objects like lemonade and garden gnomes, and obstacles like dirt and flowerboxes. The boards are colorful and lovely to look at, with large puzzle pieces that have a gratifying tactility when moved. The power-ups you can earn by making matches of four or more are increasingly potent types of explosives that range from small, immediate blasts to extremely satisfying board-wiping eruptions.

Although any fan of the genre has likely encountered many of New Acres’ match-3 stylings before, it succeeds in providing a great variety of challenges and board designs that keep the levels feeling fresh. Uncovering hidden garden gnomes by making matches on top of grass; collecting flower tiles only after filling up a stationary flowerbox; digging through dirt to reach hidden emeralds; and contending with rotating lily pads, ice-encased fruit, piles of acorns, heavy boulders, and dozens of other obstacles all create very different challenges that are often combined in unique and interesting ways. You’ll often be confronted with multiple trials like finding gnomes and collecting lemonade or breaking rocks to get to inaccessible flowerboxes, interspersed with more standard requests like “collect 50 apples.” Most levels have a finite number of turns for completing goals but some are time-based (e.g., reach the goal within one minute), which adds yet another layer of novelty to an already variety-packed game.

One of our other favorite aspects of New Acres’ match-3 levels is the fact that they all feel winnable even as you progress to higher difficulty levels. Many stages will require multiple replays before you achieve the goal, but victory rarely feels completely out of your hands. This is largely due to the fact that there are very few optional power-ups available: you can take a booster into a level when you first start it to have an explosive or rainbow blast from the beginning, but the only item you can purchase and use in-stage is the single-tile-removing shovel. Everything else you will have at your disposal simply by playing—all the explosives are earned by making matches and rainbow blasts (which remove all of a designated tile) are received once you detonate enough explosives. This smaller selection of boosts prevents the game from feeling like pay-to-win, focusing instead on your matching abilities and the occasional luck of the drop.

Our only complaint is that the game’s economy feels a bit unbalanced at the moment. If you do wish to purchase some more shovels or extra moves upon losing a level, you’re going to have to dig deep into Austin’s wallet: a set of three shovels is 1,900 coins while a single continue (+5 moves) is 900 coins. Each time you complete a level, you’ll earn between 50-70 coins, with 70 being a very strong finish with lots of moves leftover that turn into bonus coins. This means that it takes at least 12 levels before you earn enough for even a single continue, and levels cannot be replayed for extra coins. You will occasionally earn small monetary rewards as you restore the garden, but these are too few and far between to rely on for regular income. There is also a daily wheel you can spend for bonus coins or boosters, but its rewards range from 50-400 coins at the most. So there is a small trickle of coins regularly coming in, but when you’re really struggling with a stage, those 900-coin continues can add up quickly. 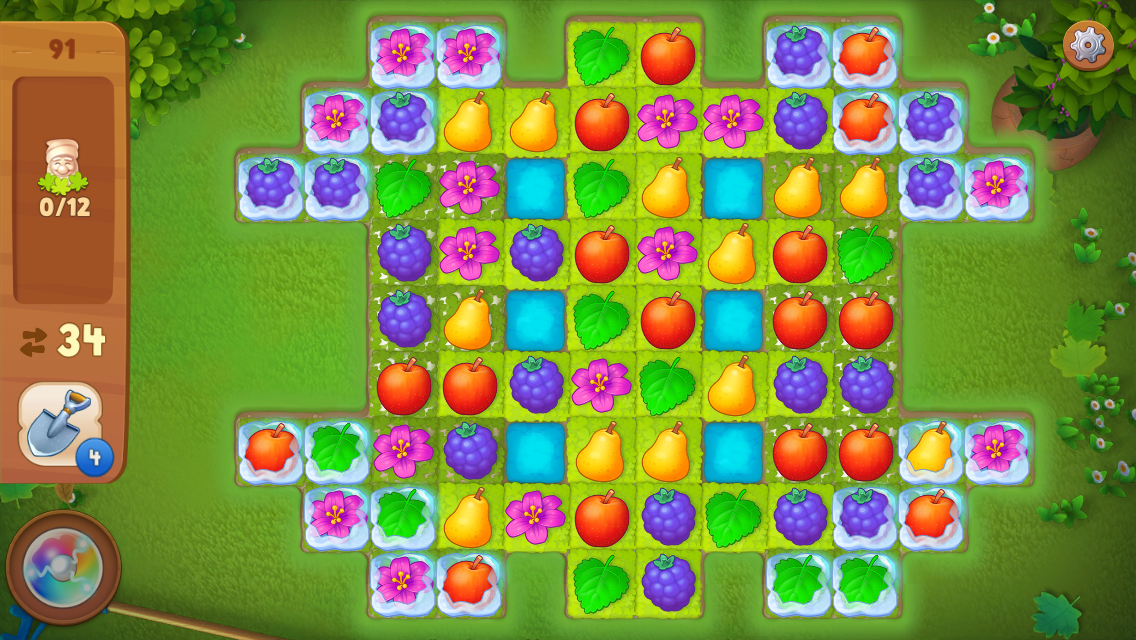 There is also a hard cap of five lives right now, with one life being lost when you fail a level. Lives refresh one every half hour, but again, these can be eaten up fast on tough stages and leave you waiting for a chance to play again. The only in-app purchases available are consumable coin packs, but we’d really love an IAP to remove or at least increase the life cap so we have more opportunities to play.

If you have the patience to wait for life refills, however, Gardenscapes: New Acres is a true gem in the match-3 genre. The garden restoring portion of the game is extremely engaging and rewarding, thanks to the gorgeous graphics that provide intricate details of even tiny features like the flowers in a planter or the butterflies fluttering around the stream. Austin himself is alive and active, wandering the garden, watering plants, reading the newspaper, posting pictures of the estate on his social media, and doing dozens of other little things that make him more than just some NPC that gives you tasks. He often talks to himself or you, wondering out loud about ideas for the garden, neighbors you’ve met, or just general questions like “Do you always play at night?” When you complete a level he congratulates and applauds your success; if you fail, he offers you coffee or words of encouragement for the next attempt. 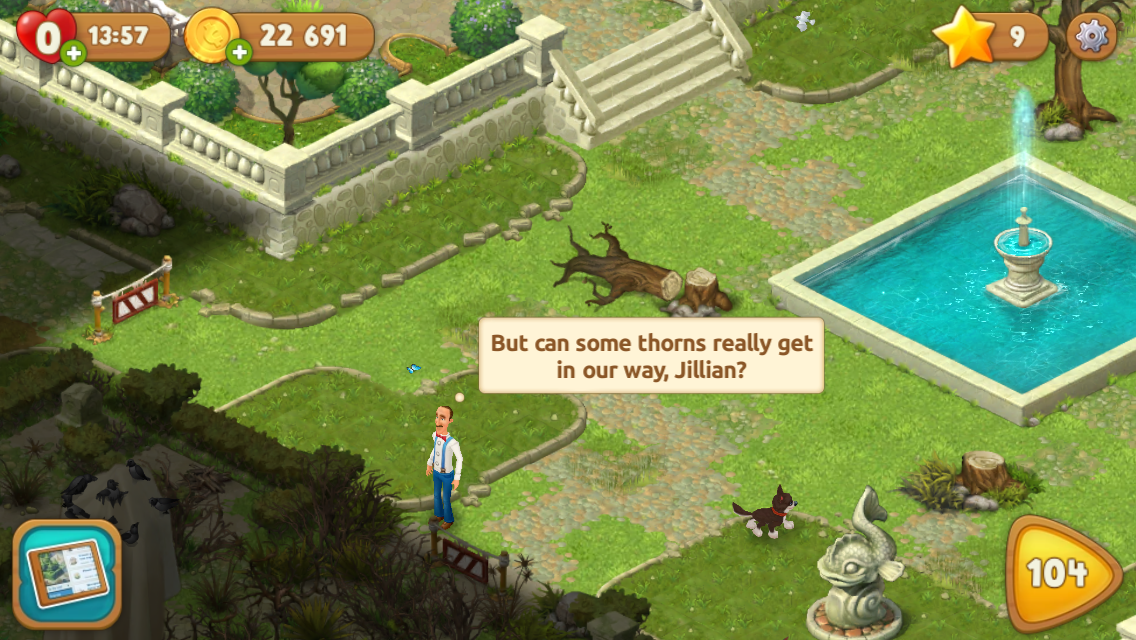 Completing tasks, developing the garden, and decorating it as you choose makes the world feel like your own (and Austin’s, too, of course). And the match-3 stages you play to reach those goals are just as fun and satisfying as the restoration itself. New Acres provides the perfect cycle of challenge and progress, wrapped in a highly polished set of game modes that work together beautifully. Gardenscapes has been doing this for years, but as an experience designed for expanding on mobile—and which has already received over 200 additional levels and numerous new garden sections through updates in less than seven months since launch—players will have rewarding matching, gardening, and Austin-interacting to look forward to for the foreseeable future.