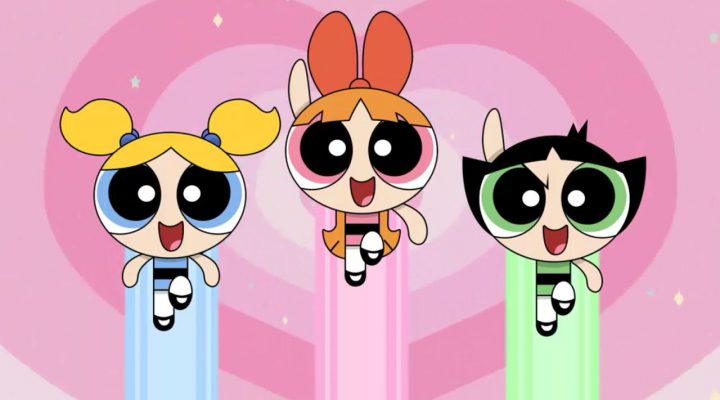 Excellent combination of two genres into one cohesive game.

Momentum-based match-3 is a fun and fresh approach to the genre.

The visual delivery can be a little too much at times.

The city of Townsville: home of the world-famous Powerpuff Girls, a trio of crime-fighting sisters who are perfect in every way …except when they feed their pets too much pet food and the pets grow into city-crushing monstrosities!

Fortunately for the fine folks of Townsville, the Powerpuff Girls — and by extension the player — are more than ready to tackle this terrible tragedy.

Coinciding with the revival of the popular Cartoon Network series from the late 1990s of the same name, Flipped Out – The Powerpuff Girls features Bubbles, Buttercup, and Blossom taking on a city filled with monsters of their own accidental creation. The big twist (or should I say flip?) of the game is that Flipped Out is actually two games in one, and the execution of that combination is flawlessly done. 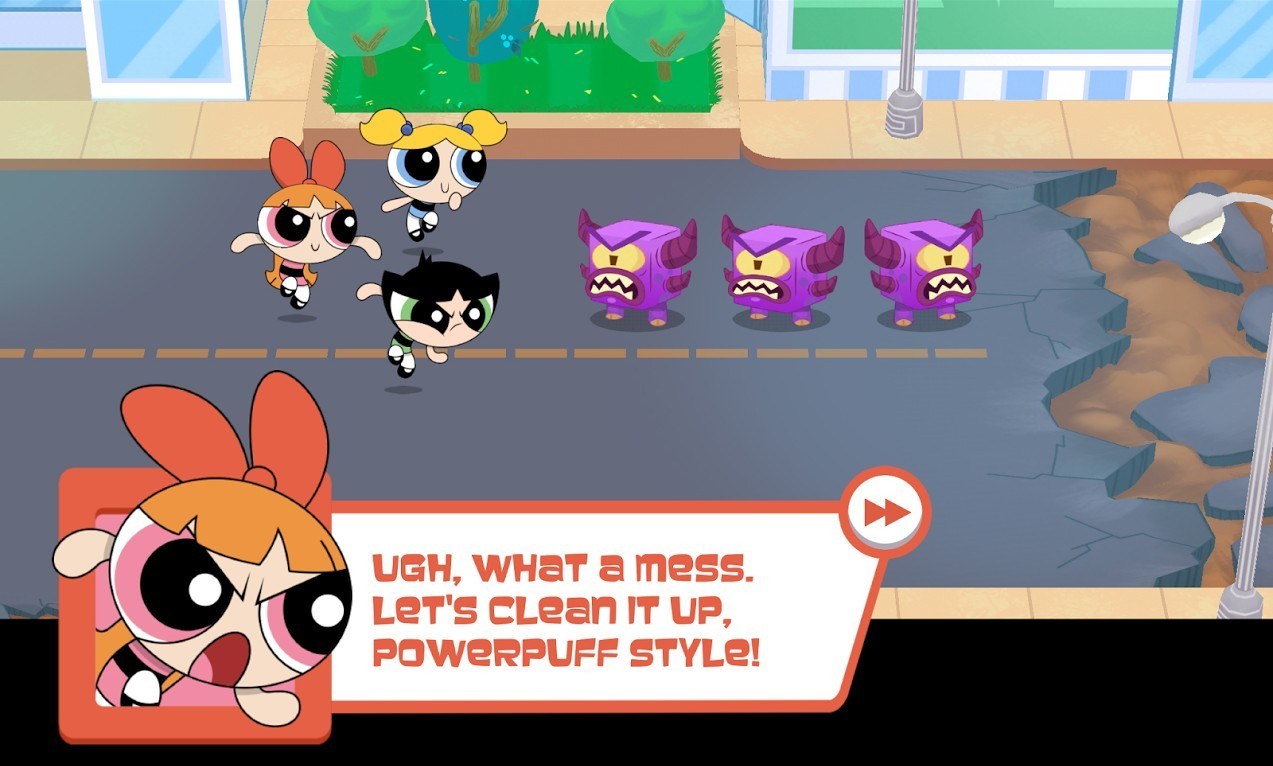 Flipped Out is part beat-em-up brawler, part match-3 puzzle game. At any point during the game, players can literally flip their phone or tablet around to trigger the other game mode. The amazing thing is that the transition from brawler to match-3 (or vice-versa) is almost instantaneous, and the new layout adapts to fit what was going on just when the game was flipped.

For example, if I was playing in the brawler mode (called “Spice mode” here), and I was fighting a group of sludge monsters, I could flip my tablet around to trigger the game’s match-3 mode (aka “Sugar mode”). After the flip, the girls would be in relatively the same formation they were just standing in, and the monsters would be in roughly the same locations they were crawling around in, but the game is now zoomed back to a position familiar to any match-3 veteran, rather than the up-close view that accompanies the brawler mode. 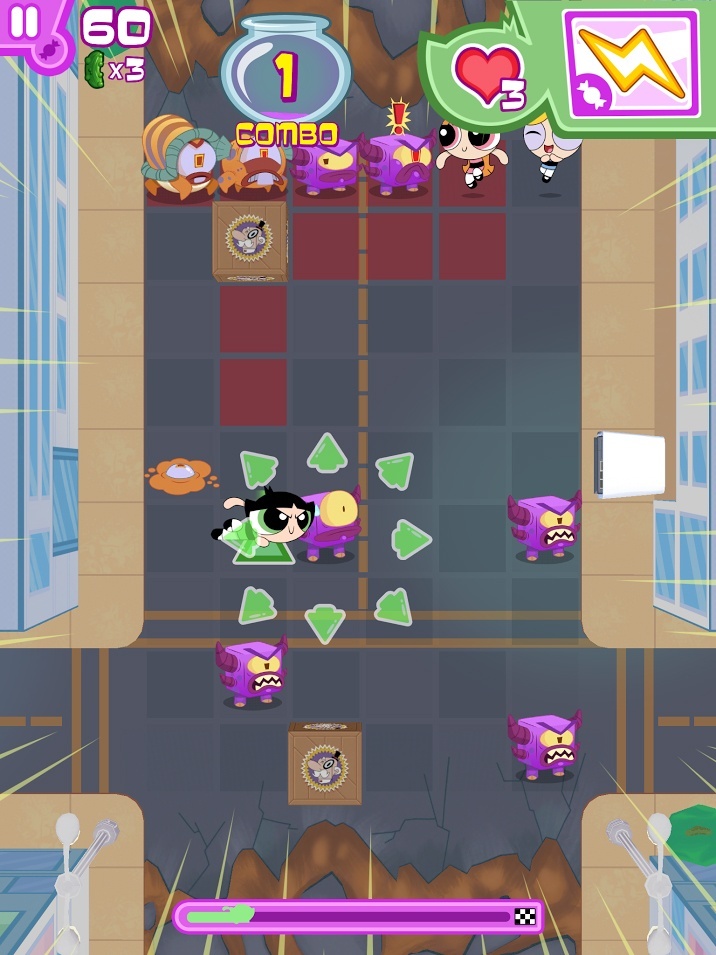 Gameplay in the Sugar and Spice modes are, as you’d expect, completely different.

Players can flip between the modes at their leisure and can typically play through an entire level in their perferred mode if they wish, though frequent flipping is more fun (and later in the game, a strategically sound option).

In the Spice mode, players tap and drag each of the three sisters to the incoming enemies, to trigger automatic, proximity-based kicks and punches, occasionally tapping on an enemy to trigger a special attack, or swooping around an enemy to dodge. 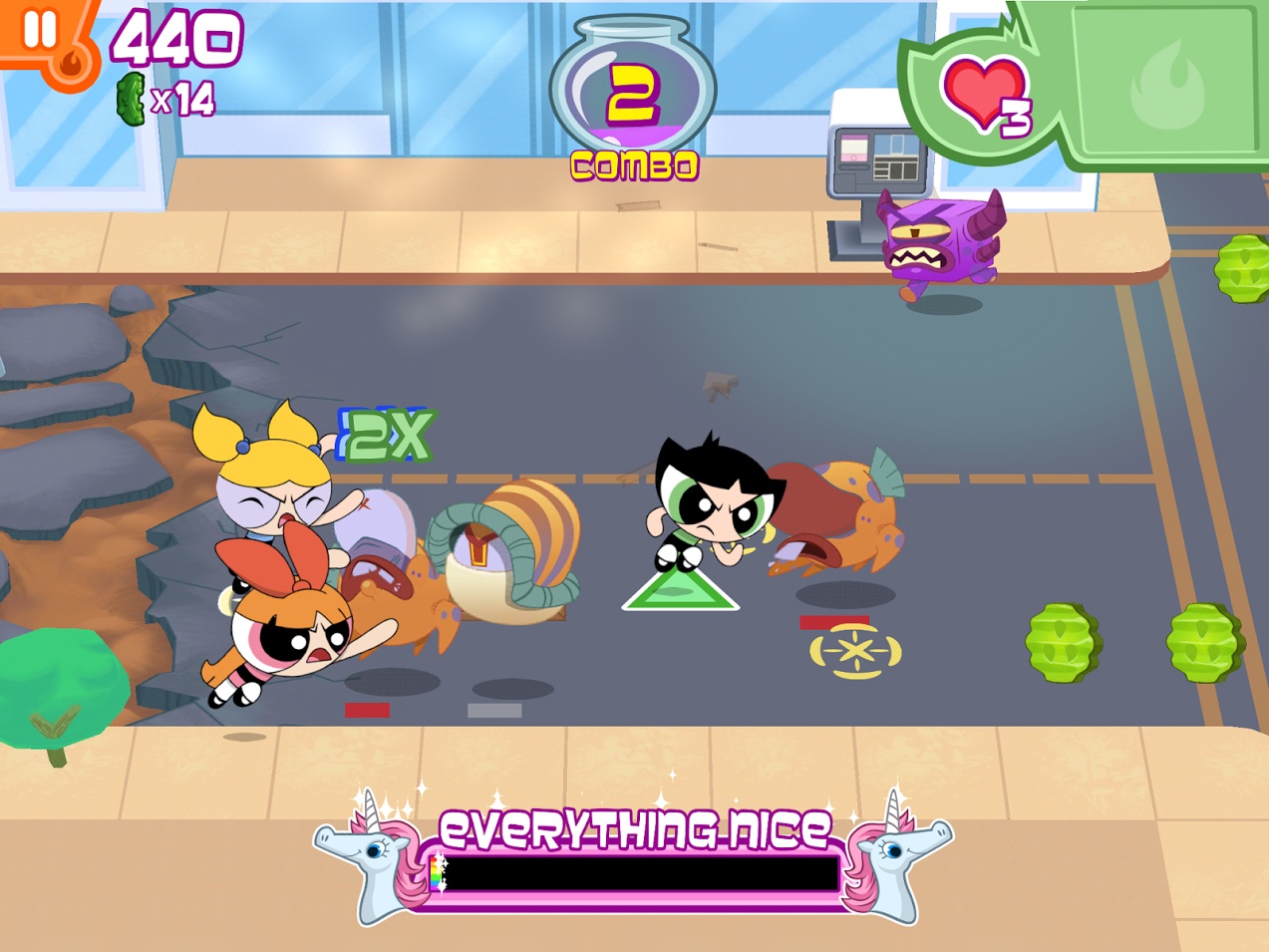 In the Sugar mode, players can take their time and strategically pick and choose which sister they wish to attack which specific monster. Players direct the chosen sister to fly in a designated direction until they hit an obstacle or an enemy. If they hit an enemy they will stop flying on impact and grab the monster, gaining the ability to throw it in any direction from its current location. If the monster is thrown into a pack of two or more similar monsters, the incoming monster will trigger itself and all the other similar monsters to detonate.

The planned trajectory mechanic really saves Flipped Out’s Sugar mode from being a a cheap, match-3 knock-off, and it really adds a thematically appropriate element (the super-speed flying attacks) to keep the experience cohesive.

Both the Sugar and Spice gameplay modes can be modified with unlockable abilities that allow each of the sisters to utilize advanced skills that can further alter the strategic options that players have in either mode.

The only problem with the game is that sometimes it’s a bit too hectic. I’d trigger a flip and suddenly a combo was activated or an item triggered, and I had no idea what was going on as enemies were shifting around or vanishing completely. Getting a combo chain going is great, of course, but the effects were jarring and often broke the focus that I had sunk into while playing the game. Some people might not have an issue with this one bit, and I do realize it’s a very minor issue, but it’s something that continually nagged at me during my time with the game.

Flipped Out – The Powerpuff Girls is an excellent game. It successfully combines two genres into one fantastic package, and offers players as much strategic gameplay or straight-up action as they desire.

This Week’s 12 New iOS Games You Should Be Playing