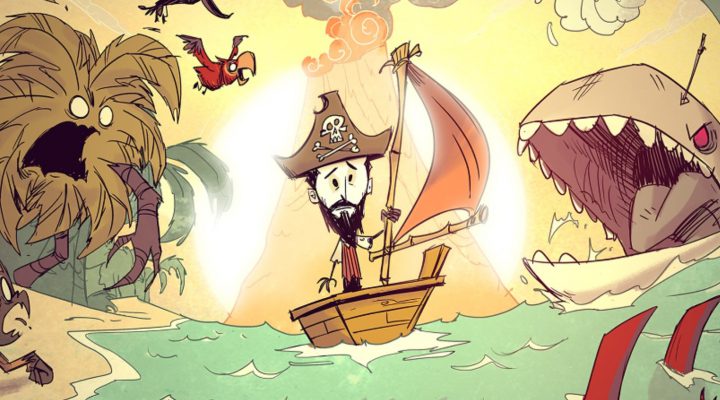 Touch to move makes so much sense.

You can steal ships while traversing the high seas on survival-made craft.

Not for the faint of heart or the unmotivated.

Chance you might have to deal with the odd random death.

For fans of the original Don’t Starve: Pocket Edition, the surprise release of the Don’t Starve: Shipwrecked expansion by Klei Entertainment was by far the best surprise of the holiday season. Even better, while other platforms deem it necessary to have the original Don’t Starve purchased for Shipwrecked to work, the expansion on mobile functions as a standalone app. Given the weeks of your life you are likely to lose to the game, the fact that this only requires a single purchase makes the mobile version of Shipwrecked a total steal.

New players should be warned however that familiarity with the characters and the concept are expected. There are no detailed tutorials here, no in-game walkthroughs. It’s simply you, your wits and a deserted island – well, deserted except for the snakes and other terrifying creatures that go bump in the night. This being said, there wasn’t much in the way of instruction with the original Don’t Starve either, and even if you are new to survival games, none of this should deter you – Don’t Starve: Shipwrecked will likely be one of the most frustratingly wonderful games you will play this year.

The expansion origins of Don’t Starve: Shipwrecked means that players expecting a radically new game experience will be disappointed. At its core, Shipwrecked is more of the same. More fantastic game art. More of your favorite characters. More creepy music. More frantically trying to collect enough supplies to ensure that you have a fire to keep the darkness at bay. More terrifying creatures to rob you of your life.

But that doesn’t mean that Don’t Starve: Shipwrecked is an expansion you should skip. New challenges like sailing the high seas await, meaning even skilled Don’t Starve enthusiasts should check their ego at the door. Choosing just the right amount of food for a sea journey (trickier than you’d think), knowing when to turn back and when to forge ahead, and a willingness to risk landing on a new island that might have fewer supplies (and more danger) than that from which you came are all skills you’ll need to develop if you want to replicate your Don’t Starve: Pocket Edition lifespans.

In fact, many of the most exhilarating parts of Don’t Starve: Shipwrecked are found on the high seas. Have you ever wondered how well you’d fare against a pack of sharks? How do you fancy your odds against a herd of demonic water buffalo? What would you do if you found yourself on the high seas the day hurricane season hits?

As with the original Don’t Starve, the longer you survive in Shipwrecked, the faster you learn that it isn’t the things that go bump in the night but the weather that’s your truest enemy. Particularly during hurricane and monsoon season. As each island you come across becomes increasingly inhabitable, you need to find a way to balance the waves and the floods. Far from ‘only the strong survive’, success in Don’t Starve: Shipwrecked requires you to simultaneously be the fastest, most clever, bravest, and most resourceful — with a strong helping of luck thrown in.

Luck. That’s the one element of Don’t Starve: Shipwrecked that can make it an incredibly difficult and frustrating game to play. In one foray you might not face your first real challenge until Day 7 or 10, while in another you might encounter a pack of snakes that will tear you into pieces two minutes into your first day. But it’s this variety that makes it all worthwhile. When you make it past your first month, there’s a real sense of accomplishment. You haven’t just unlocked a new level – you’ve survived. You – yes you – are the ultimate survivor. Just don’t let it go to your head. Just like in Shakespeare, hubris is deadly.

When it comes to gameplay, there are two noticeable improvements in Don’t Starve: Shipwrecked over Pocket Edition. The switch to strictly touch-controlled movement is more straight-forward, while the accuracy of lighting changes between night and day has also improved noticeably. This being said, there were a few instances of ‘random death’ (no creatures in sight, not hungry, sane, etc.) and night-time creatures appearing during the day, but overall they didn’t affect the enjoyment of the game too badly. The size of the game also means that it can take a bit of time to boot up (between 2 and 4 minutes), but if this bit of waiting is a deal-breaker, Don’t Starve: Shipwrecked probably isn’t the right game for you.

There’s so much to love about Don’t Starve: Shipwrecked that you should get stuck in as soon as you can. Hopefully, this release is a sign of more to come from Klei for Don’t Starve’s mobile gamers. (We’re still holding out hope that one of these editions will eventually get the terrific multiplayer found in Don’t Starve Together).