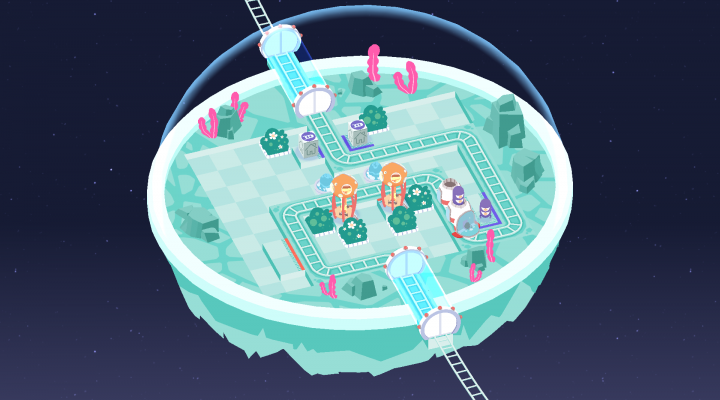 Tons of player-friendly considerations, from easy undos to portrait mode to the ability to unlock all levels at any time

On more complex levels it's really hard to know if you're on the right "track" without any sort of hint system, although you never <strong>have</strong> to complete a specific stage

Cosmic Express is the latest release from Draknek, the developers who brought us the heart-achingly endearing A Good Snowman is Hard to Build. Like its snowy predecessor, Cosmic Express is an open-ended puzzle game that puts a clever twist on some familiar mechanics, presented in such a highly polished, carefully crafted package that we fell in love on the first level. 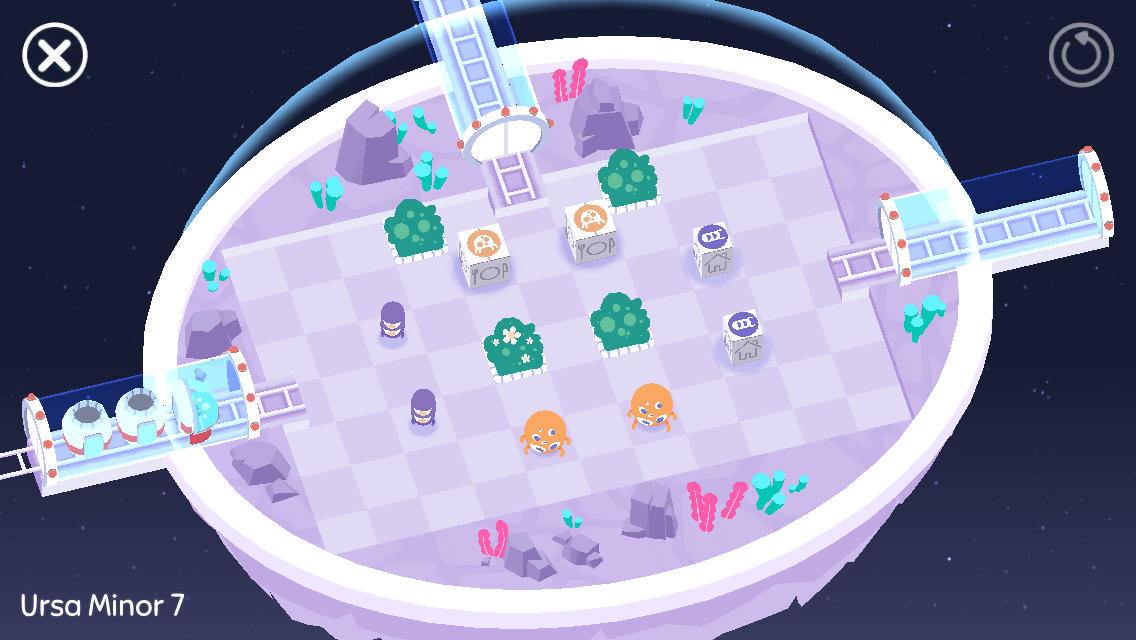 Your goal on each level is to build a train track from the starting point to the finish, picking up and depositing alien commuters along the way. Each type of alien has a specific category of building they’re trying to get to that is easily identifiable by color—take the orange aliens to the orange block, purple to purple.

The first challenge lies in the fact that you have to draw your track to an alien’s location to pick them up before continuing on to their destination, but your train has a limited number of seats. On many stages you can only carry one passenger at a time, meaning your track will need to zigzag around the screen, picking up and dropping off travelers in turn. Since your track cannot cross itself, there’s always a danger of blocking off access to an alien or building, forcing you to work out interesting roundabout paths to reach everyone in the correct order and still have access to the exit. The result feels a bit like Flow-meets-Snake, with some river-crossing puzzle thrown in, but different enough than any of these that the overall experience is entirely fresh.

As you progress through the stages, new obstacles will be introduced, adding to the list of rules your intergalactic conductor will have to consider. When green ooze aliens are included, they always have to be picked up last, as the other aliens don’t want to ride in the slime-coated seat they leave behind. Wormholes and crossroads allow your track to converge on the same point more than once, but add more layers of complexity to your path-planning. Levels with two-seated trains let you transport more aliens but introduce issues of picking up the right two aliens at the same time. There are a surprising number of complications added across the game’s nearly 130 levels, but every obstacle is featured in enough stages that each feels fully explored.

Those stages are presented as standalone stars within like-themed constellation maps. The constellation Delphinus, for instance, houses green aliens within its stages while Perseus introduces wormholes. New levels and constellations are unlocked by completing connected stages, but many levels are connected to more than one area, creating a branching and open-ended path that lets you tackle stages in almost any order. For instance, completing level 2 in the starting system of Andromeda opens up levels 3 and 4; level 3 leads to levels 5 and 8 while 4 leads to 10 and 11. All of these stages eventually lead to other constellations and types of challenges; if you’re stuck on a level there will almost always be another one (or many more than one) available to try in the meanwhile. And if you just want a free-for-all on any stage you choose, there is even an “unlock all levels” option included in the menu.

This freedom is greatly appreciated, since many stages in Cosmic Express are extremely difficult. Figuring out the perfect path to reach every alien, building, and the exit in the exact right order is no small feat, and on levels with additional obstacles or large collections of aliens a solution might initially seem impossible.

Thankfully, there are never any time or track limits: you can draw your path, test it, and redraw or edit it as many times as you like. Tracks can be drawn from the starting dock or the exit and deleted or expanded from any point, so you can make mid-run changes without scrapping the entire thing. As long as there is some length of track extending from the entrance, you can hit Play and see the result of your current plan, letting you build in small increments if you prefer. 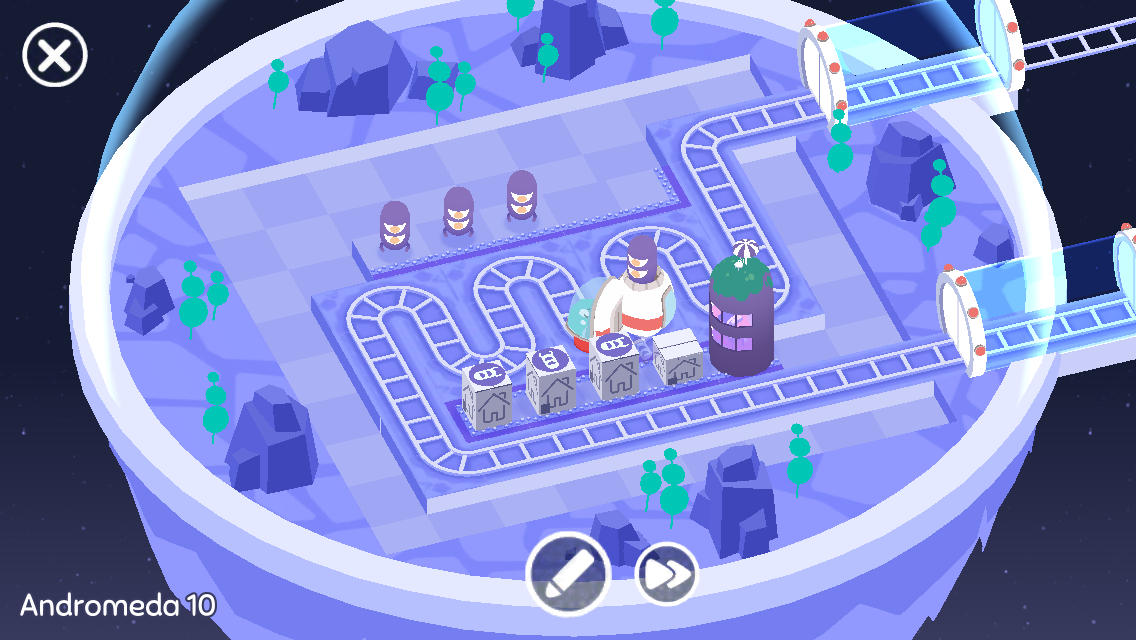 And since the game saves the track of every level you complete, it’s easy to go back and review past stages for a reminder of how you finished similarly complex levels. Short of having an actual hint button that shows you a stage’s solution, Cosmic Express is a completely player-friendly and –focused system that prevents even its hardest stages from becoming frustrating.

In addition to the superb puzzle mechanics and challenges on display, Cosmic Express is full of the type of charming little details that made A Good Snowman is Hard to Build so endearing. The aliens make adorable noises of recognition when jumping in and out of your train. Although they are eternally patient while waiting on their platforms, they do bob up and down, blink, look around, wobble slightly, check their watch, and even pull out a phone and take a selfie.

The conductor is our same monster from A Good Snowman, and the bulbous white train is vaguely reminiscent of his dear friends from that title. And in an almost unbelievable level of attention to detail, the stages themselves are actually laid out to match their position in the constellations. So, for instance, if a stage leads to another stage that is above it in the constellation, its exit will be on top. If a stage leads to a level to its right, its exit is on the right. And stages that lead to multiple levels have multiple exits, each placed in the correct location.

All together, Cosmic Express is the perfect combination of interesting puzzle mechanics, challenging-but-manageable stages, and lovable characters that keeps us coming back for more. There are some levels (we’re looking at you, Andromeda 14) that we’ve spent hours trying to figure out, yet we never grow tired of. This is thanks to the fact that there is no undo pressure to complete a specific stage, endless freedom to try as many combinations of track layouts as we like, and adorable aliens waiting along with us the entire time.