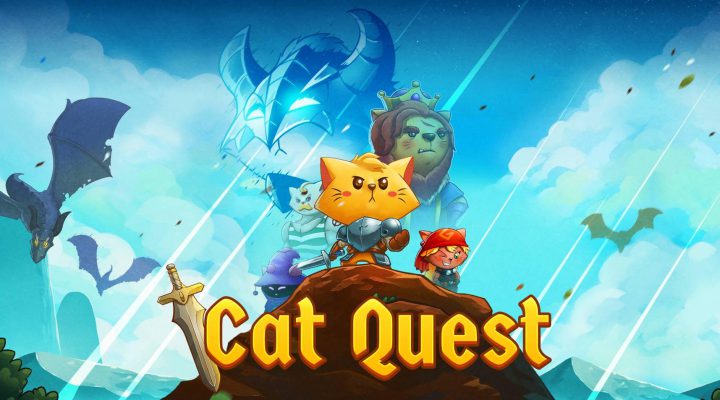 Tons of dungeons to explore, loot to collect, and sidequests to complete alongside and after the main story.

Sidequests have genuinely interesting and entertaining stories that often add to the history of the world and its characters (or are simply fun).

Wish weapons and armor had a wider variety of stats or skills to provide more interesting benefits to using one over another.

Hectic battles can sometimes be too cluttered on smaller screens, which makes seeing your hero's status mid-fight a bit difficult.

Cat Quest is a gorgeous, massive, and utterly endearing action RPG that feels both open-ended and streamlined at the same time. Despite offering a large world to explore, there are never more than a few steps to the next dungeon to loot, monster to slay, or quest to undertake. All of these activities are fast-paced and fun thanks to the simple movement and combat system which turns taps into epic sword-and-magic fights, as well as the cattivating personality that exudes from every corner of the Felingard kingdom.

Your time in Felingard begins when your sister is kidnapped at sea, and your ship sunk, by a masked white cat. You wash up on shore where your guardian spirit, Spirry, appears and advises you to hurry towards the nearest town since dragons have recently returned to this land. After encountering and defeating a dragon shortly thereafter, you learn that the mark on the back of your head identifies you as a Dragonblood, the lost line of mage-warriors that once defended the realm against dragons. 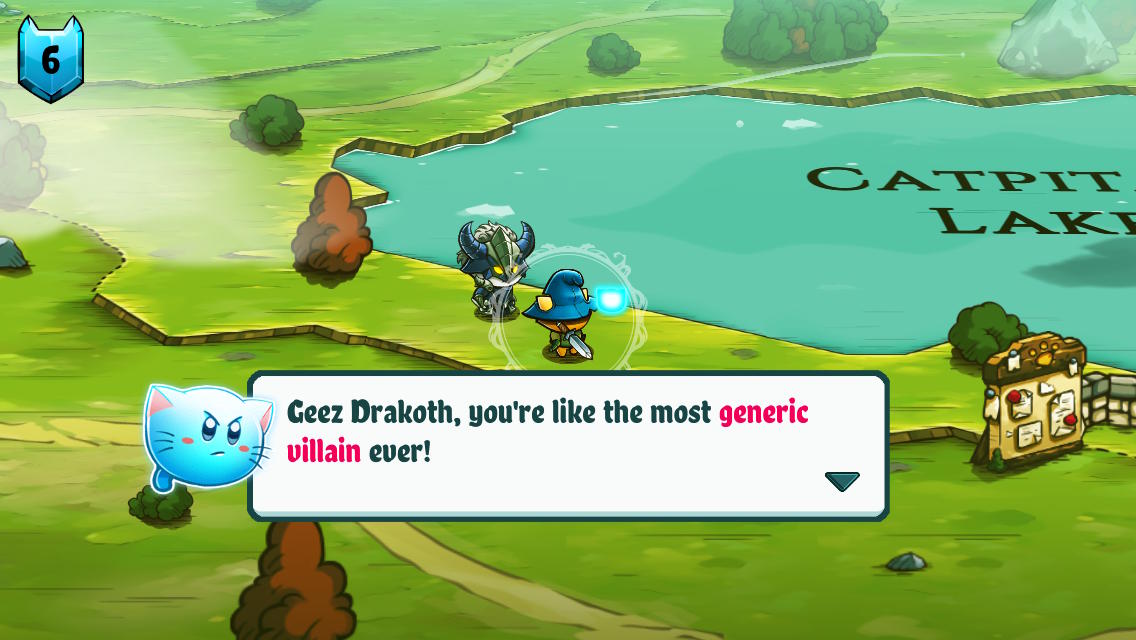 The masked catnapper appears and reveals that the dragon you slayed was called forth by him, and that the current misfortune of many of the kingdom’s residents is also his doing. He is searching for a powerful hero who is more capable than the beleaguered towncats and asks you to prove your worth by defeating the other dragons he has summoned. If you are able to do so, he—Drakoth—promises to free your sister.

The main story sets you on a path to gaining the strength and skills you need to take down the remaining three dragons, and it is always your default goal. But you are able from this very early point to explore the world freely, take on sidequests, explore dungeons, and generally head in whatever direction interests you. The many small villages throughout Felingard—all with very appurrpriate names like Mewtown, Pawt City, or The Catpital—each house a Quest Board where villagers will post missions they need help with. If you accept a quest it becomes your current task, and you can only have one quest active at a time which prevents too many destination markers cluttering up the map. Quests have recommended levels based on the strength of the enemies you’ll face, so you won’t be able to do every single sidequest from the very beginning. But with over 60 optional missions available outside of the main story we never had trouble finding one to tackle. 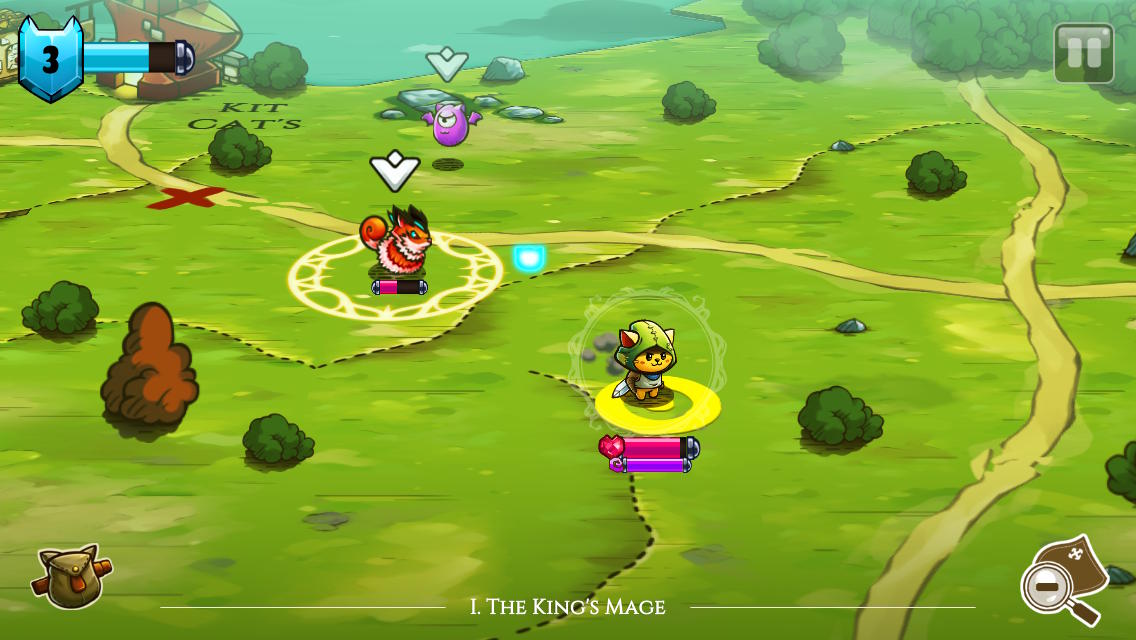 Most of the missions in Cat Quest involve making your way to a specific dungeon or area of the world, fighting a group of enemies, and then returning to the quest-giver. While this formula can be a bit repetitive at times, a number of things prevent this from being a negative. To begin with, quests and dungeons are quite short, with longer missions broken up into multiple, smaller requests. Even if you find yourself taking on a task that feels too familiar, it won’t take long to complete and move on to the next one. In addition to this, as you progress through the main story you’ll unlock two skills that allow for traveling around the map much faster. This makes missions that send you between towns or dungeons a breeze and greatly reduces any travel slog.

And most of all, the quests you receive from the townskitties are consistently interesting, enlightening, or simply funny, making each one a joy to accept and see through to completion. Your companion, Spirry, acts as the voice for your silent protagonist’s journey, and his wide-eyed reactions to many of the quests are absolutely hilarious. Some of those quests are lighthearted fun, like the blacksmith whose shipment of popular TV shows keeps going missing. Others offer fascinating backstories about this world, like the history of the godcat, Mauth, and his followers. And some are truly touching, like the twin towns plagued by a mysterious curse and the poignant resolution you help its inhabitants reach after multiple questlines.

Actually completing these missions or progressing the main story involves a lot of fighting and looting all across Felingard. Monsters roam the main world map and its many dungeons, and combat takes place in real time by simply approaching and engaging. Cat Quest’s combat is most reminiscent of Crashlands, with enemies’ area of attack represented by a transparent red target that flashes or fills in as they prepare a magical or physical strike, respectively.

Your hero has a melee attack available by simply tapping on a target, which causes him to rush in and release a flurry of strikes, as well as seven different magic spells with varying ranges and effects. The mana used to cast spells is recovered only by successfully striking an enemy with your weapon, so battles consist of a lot of rushing in to strike and accrue mana, dodging enemies’ attacks, casting powerful magic, and then repeating the process. The fact that you have to use melee attacks to recover mana keeps fights fresh and varied, especially since enemies have specific weakness to either physical or magical skills, which makes balancing the two even more critical. 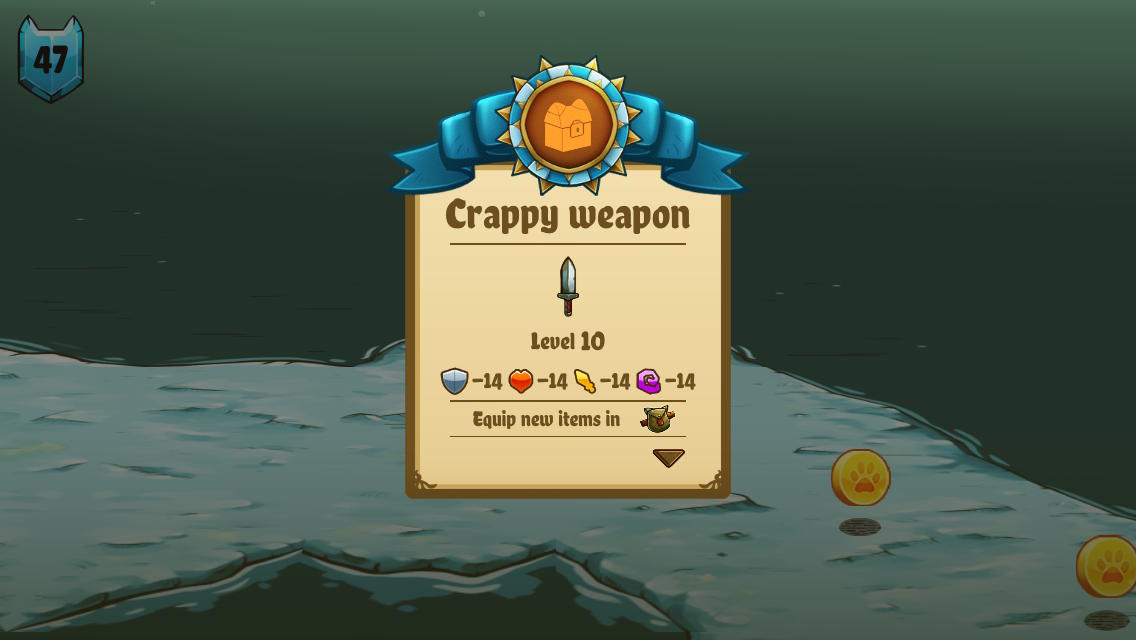 As you complete quests and explore dungeons, you’ll earn and discover a variety of different weapons and armor for your Dragonblood to equip. These change his appearance—in ways both intimidating and adorable—and offer adjustments to both attack types, his HP, as well as his shield, which provides an additional, regenerating health bar. The loot system in Cat Quest is interesting as you don’t always find new equipment in treasure chests: often, you’ll find the same item, which causes that object to level up and have better stats. Instead of purchasing new equipment at the blacksmith’s shop, you can pay for a random treasure chest unlock which will boost one of your current items. Despite this system, there are still a lot of pieces of equipment to discover in Cat Quest, to the extent that you will likely not use a majority of the ones you collect.

A lot of the content in Cat Quest is technically “optional”: the main questline is much shorter than all of the sidequests combined; most of the dungeons exist simply for dedicated explorers to find and plunder; a number of secrets are easily missed unless you stumble upon them; and even the magic spells only require you to learn the very first one, Flamepurr, with the rest available to purchase from Arcane Temples if you choose to do so. 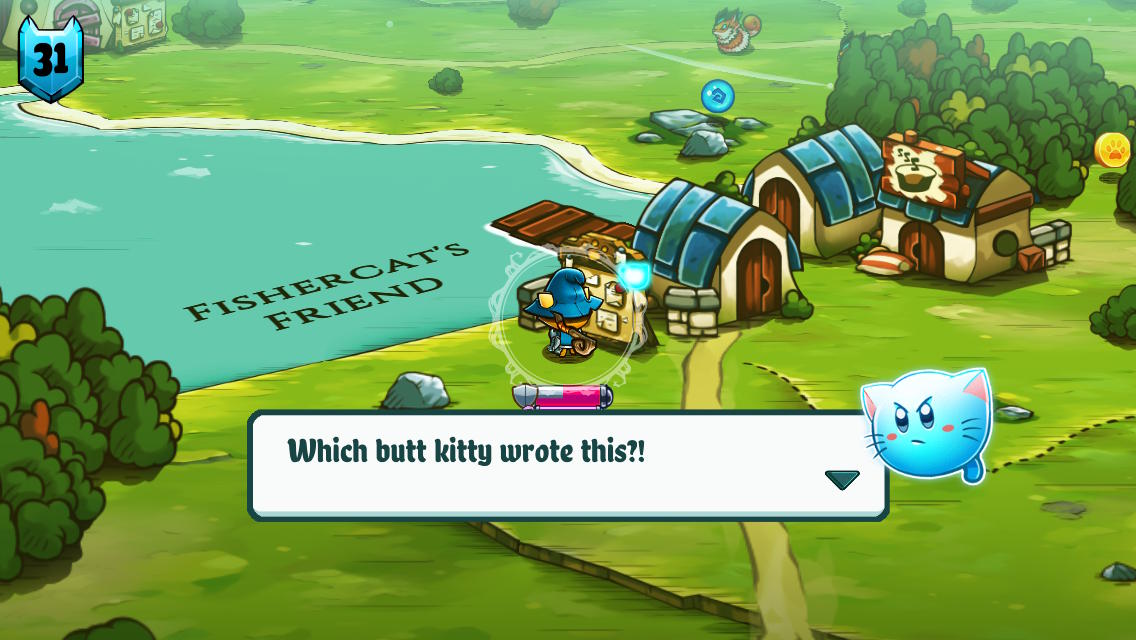 Yet players who take the time to fully experience this world and everything it has to offer will be handsomely rewarded. Its quests are entertaining, its history is rich, and its characters are lovable “furry butts,” as Spirry would say. The catspeak is integrated so fully and effortlessly that it began to feel like a real language as we played: “pawtner,” “wait-a-mewnit,” “fur real,” “nyan,” “puff your fur!” and so many more phrases bring the engaging, adorable land of Felingard to life. All of the little details, from the “Paws” menu to the method of saving—”catnapping,” in which your hero simply flops over onto the ground—is pitch perfect and appropriately lighthearted. And the fantastic action RPG gameplay is the ideal way to explore this world and discover all of its charms. Cat Quest combines epic world-building with endearing and self-aware humor into a package that should not be missed. Fur real.

Dangerous Games: Illusionist Review – Is This Your Card?