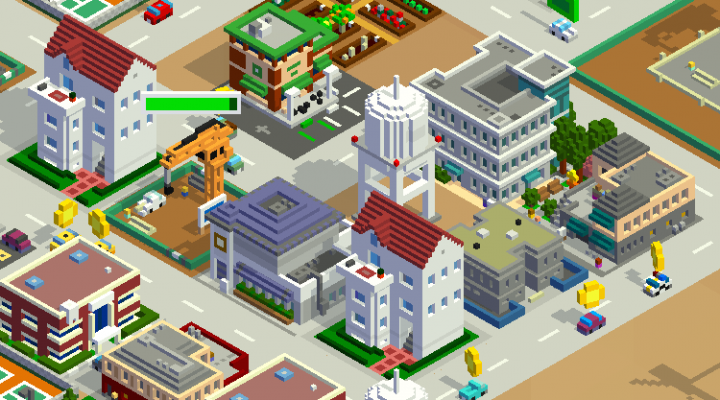 Huge selection of building types to choose from and the ability to make your favourites permanent parts of the city.

Take to the skies with all manner of aircraft. Drones, helicopters, private jets, airliners and more!

Big coin bonuses just by clicking on cars. Traffic has never been this lucrative.

Lacks the ability to take a 360 degree look at your village.

With so much going on at once, some are likely to find it all to be overwhelming.

Bit City is one of those games that really should come with a warning label: Installing Bit City may result in the loss of your weekend and social life for the foreseeable future. Though it leans more towards clicker than true city builder, which may irk some simulation fans, it’s by far the best hybrid clicker-simulation game in recent memory.

The clicker dimension helps make Bit City incredibly easy to get the hang of and almost impossible to put down. There’s just so much to do! There are apartments to build, cars to get on the road, decisions to be made about emissions taxes — then there’s all the income to collect from the vehicles on the road and in the skies. It’s easily a 24/7 job when you’re occupying the roles of both Mayor and Town Planner in Chief.

If you do find yourself having to put the game down, then at least there’s the idle clicker component that allows you to collect 10% of your coins for a set period of time (possible to upgrade the length of time at the bank). But as our handy guide to maximizing your earning potential suggests, 10% isn’t enough of a reward to not leave the game open as much as you can. 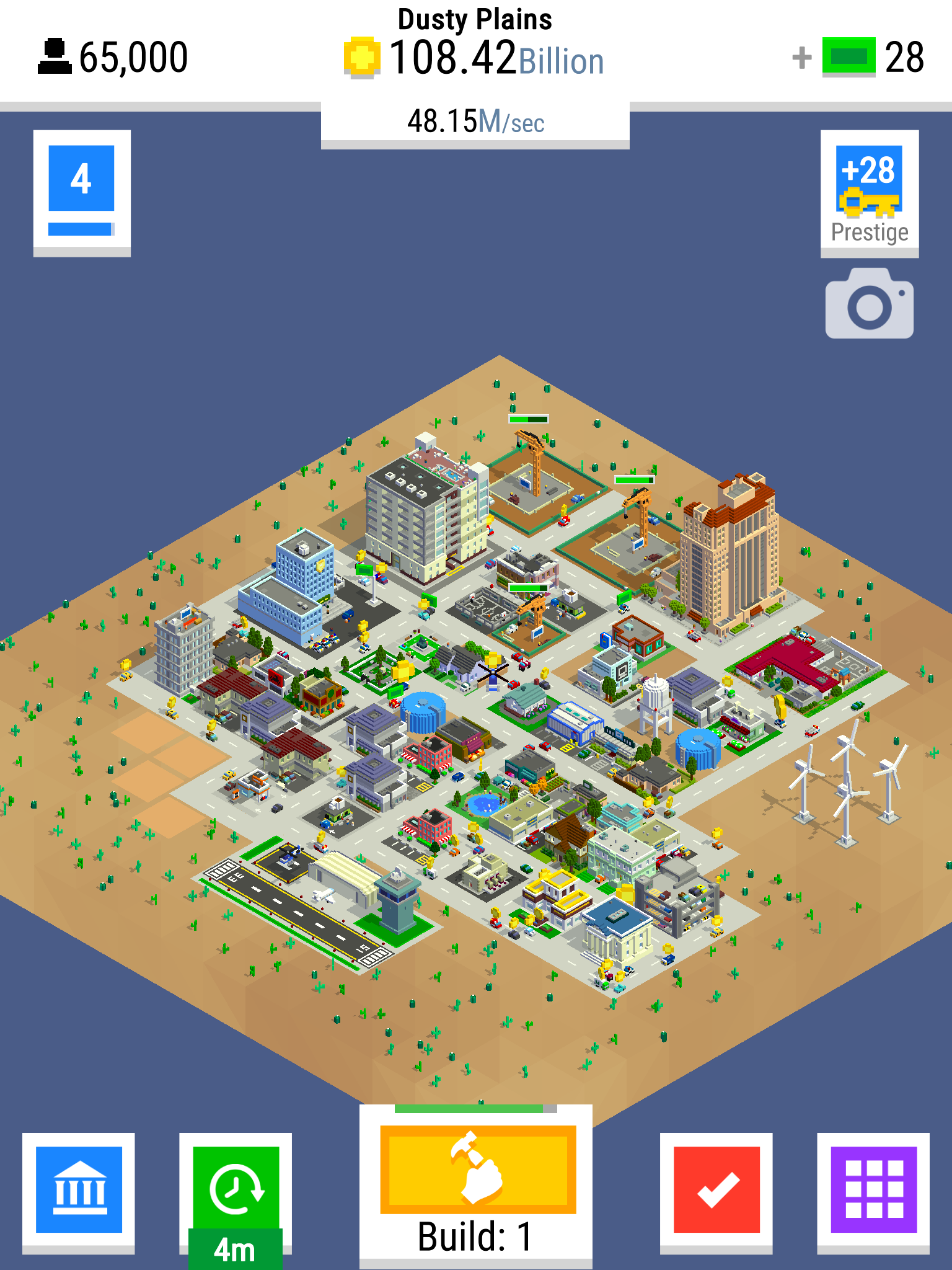 One of the coolest parts of Bit City is the sheer diversity of residential buildings, businesses and services. While you need to take into account demand, it’s possible for a baseball fan to make sure their big city in the desert is well stocked with baseball fields large and small. Large lots make great homes for massive apartment complexes that can help give your city the kind of skyline that’ll make those flying in to your airport feel like they’re headed somewhere special.

Another major draw, at least for some players, is the ability to prestige. Forget regret – prestiging gives you the chance to restart the game with the benefit of hindsight and the bux (the game’s premium currency) you’ve accrued along the way. If you pick the right time (we’ve got a guide that’ll help), you’ll also be reliving your past with a big earnings bonus courtesy of all the keys you’ve collected on your most recent go around. Don’t be afraid to start again and design the city of your dreams. 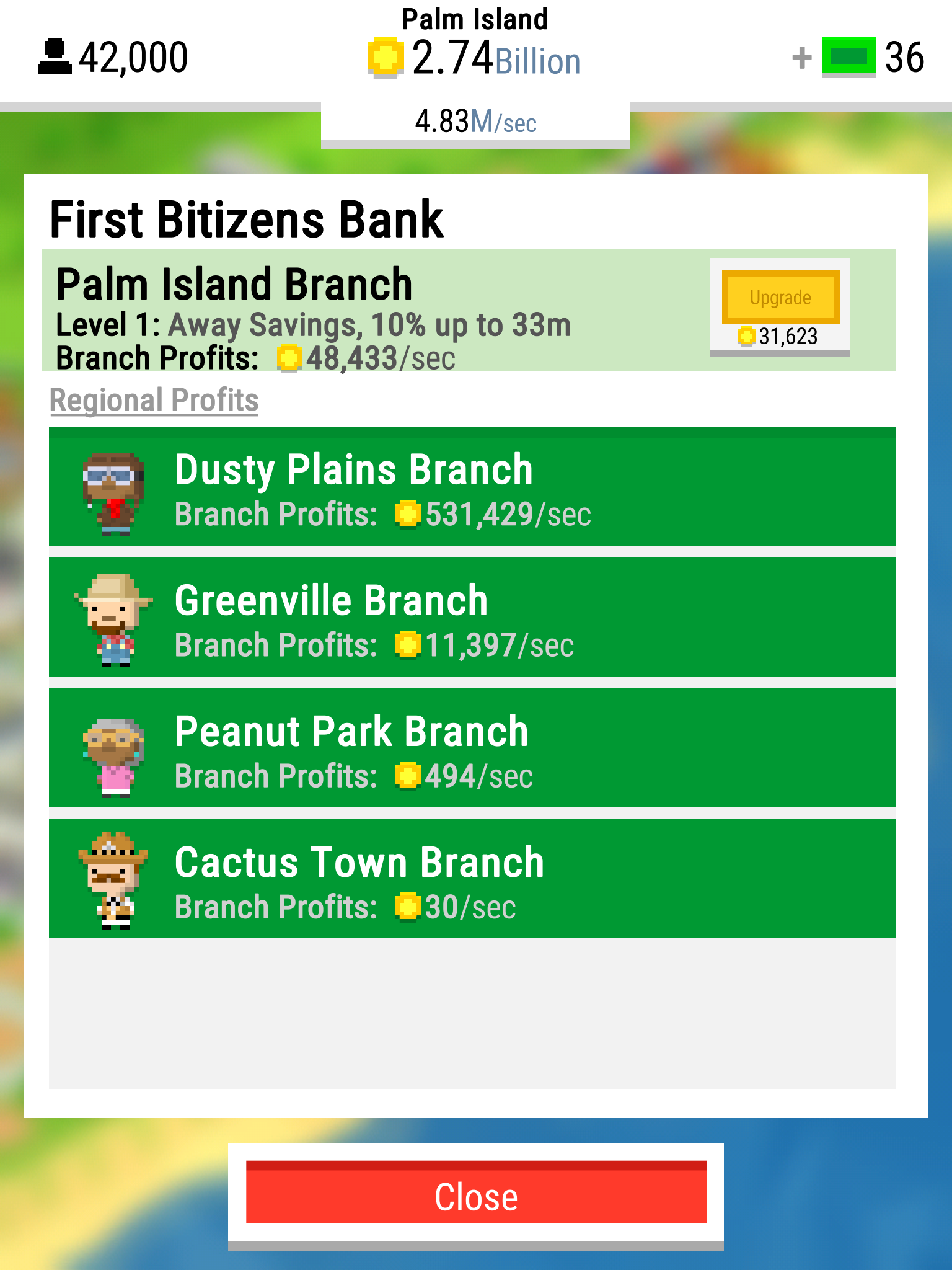 When building on a new lot, the building that’ll be developed is determined randomly. Should you find a building type you really like, it’s possible to lock it down by hitting the historical button in the building menu. Some building types earn more than others so pay attention to its earning potential. Villas Armas apartments, even if they’re in low demand, are a bit like striking gold so they’re always a good choice. Putting the building in historical mode still allows you to level up, so commitment is nothing to be afraid of here.

Struggling to find a particular business, service or home that you think is essential to the perfect city? Check the special buildings options in the main menu (purple button). With enough bux you can add a fireworks stand or even NimbleBit HQ to you growing metropolis. Special buildings also give a sizeable earnings bonus so if you’re looking to hit an earnings-per-second milestone and have some bux to spare a special building would be a good idea. 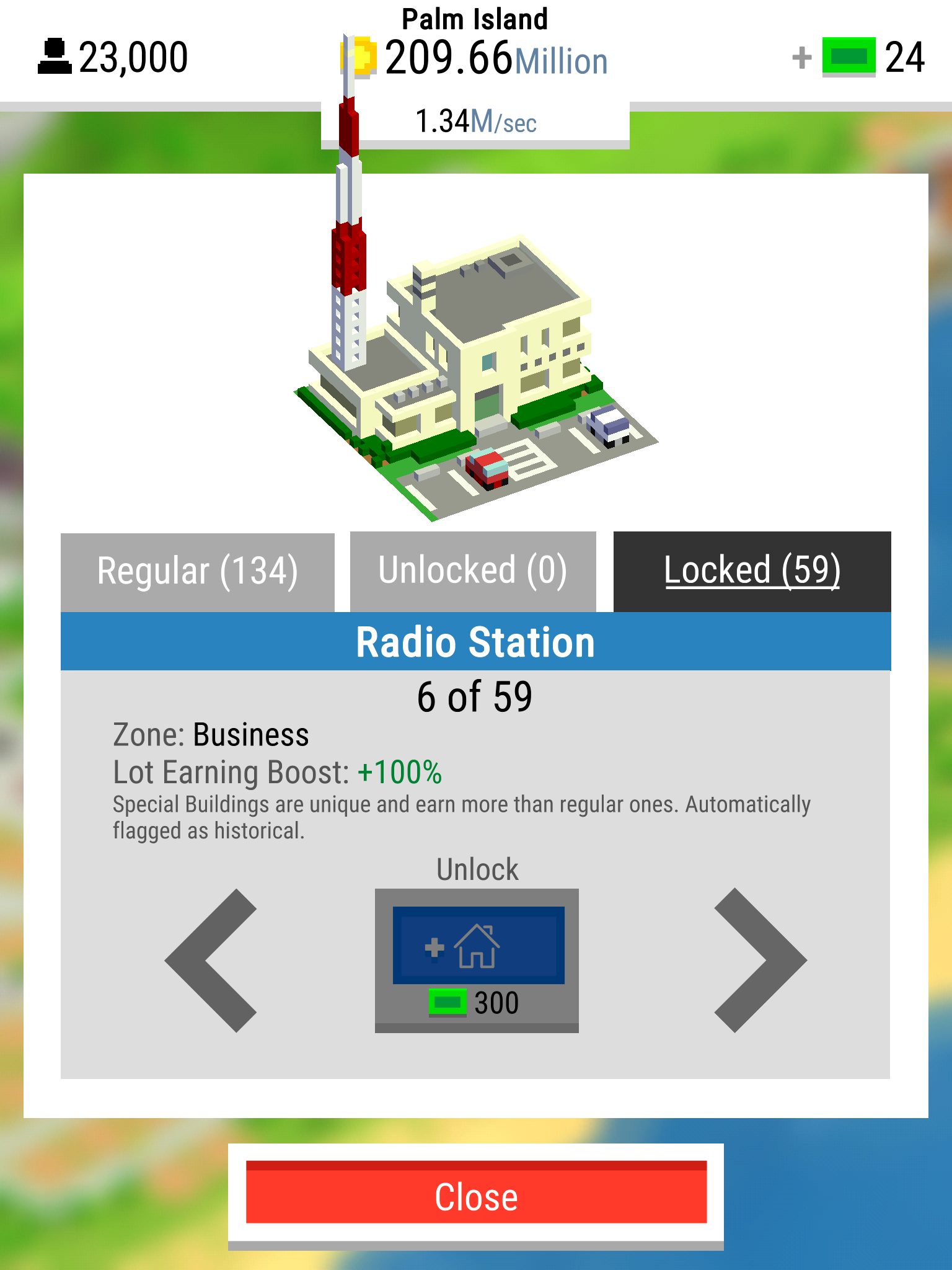 Bux are fairly easy to collect in-game if you’re willing to put the time in to collect them from vehicles and take the missions serious, if you just can’t wait for your ultra-modern house or farmer’s market it’s possible to make basically an immediate purchase.

Graphically Bit City is solid, but not a real standout. There aren’t any real issues with graphic performance, or performance in general – the game plays great even on older devices like the iPad 4. Still, as much as the sensitive zoom in/zoom out is appreciated, it can be a bit tricky to keep up with all the vehicles on the road without the ability to view the town in 360 degrees. 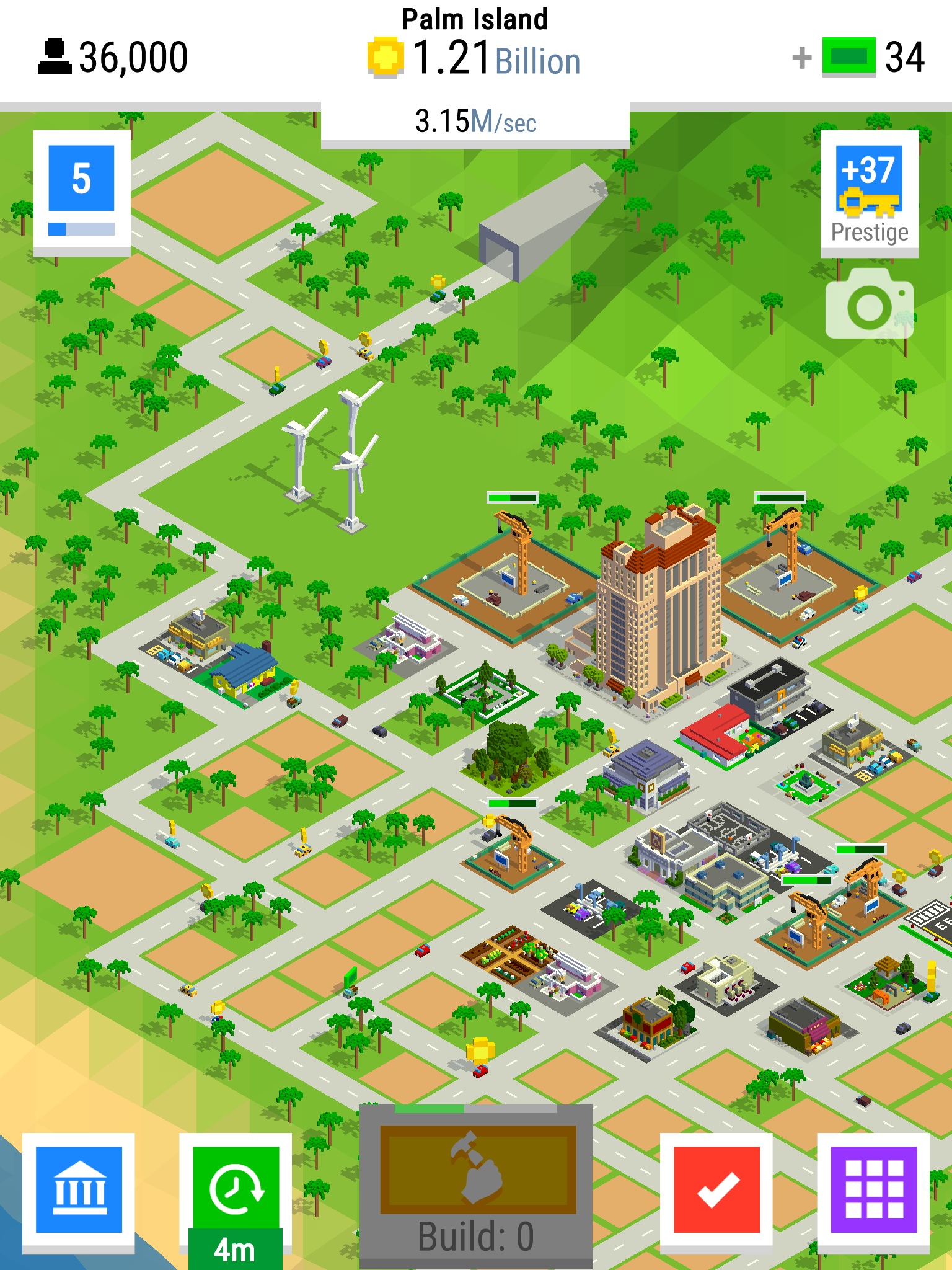 However, what Bit City lacks in terms of spectacular graphics, it more than makes up for in soundtrack. Are you someone that routinely listens to Spotify’s focus playlists while you work? Bit City’s jazzy soundtrack is the perfect background focus music, which is another reason to leave the game open day and night so you can collect maximum coins (if you can avoid the temptation to ignore all other responsibilities to just keep clicking). While Tony Hawk Pro Skater 3 might still have the best video game soundtrack, Bit City certainly has the soundtrack most conducive to deep thought.

Bit City is a solid, and highly addictive game that is as close to as perfect a blend of clicker and city builder as you’re likely to find anywhere. It might not make a lot of game of the year lists, but it’s one that’s unlikely to be forgotten quickly.

12 New Mobile Games You Need to Be Playing This Week