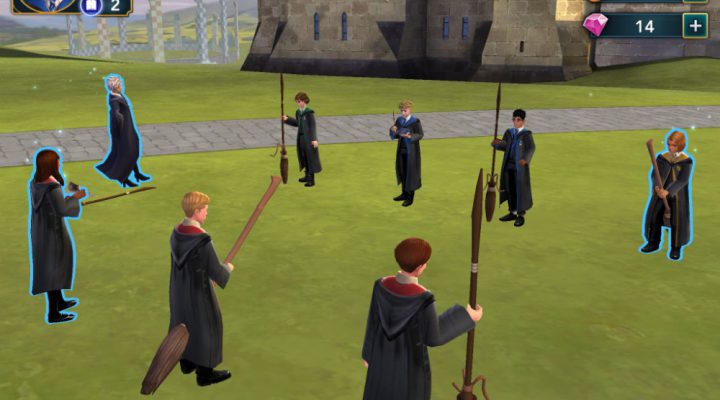 We’re sorry to report that there’s a war going on right now, being waged between people in spandex and a big, grumpy, purple alien looking for six shiny stones. A war for infinity, you might say. Or even … an Infinity War?

Yep, Marvel’s latest extravaganza opens this weekend, and is sucking all the air out of the pop culture sphere. It’s hard to even get a discussion going about new mobile games this week, since everyone only wants to talk about the Avengers and which of them are kicking the bucket.

Anyway, while there are fantastic Marvel mobile games out there with sweet Infinity War content, we’re turning our attention as always to brand new titles that have popped up on the iOS and Android app stores. Our list of five this week begins with a game based on another multi-billion dollar movie franchise, one with more wands than capes …

Some new mobile games don’t need much of a hard sell, and this is one of them. Hogwarts Mystery sends you to school in the 1980s, well before Harry Potter arrives, to be instructed by the likes of Dumbledore, Snape and the rest. It’s an RPG with very accessible and simple game mechanics, yet one that promises surprising immersion thanks to a lengthy story you can help shape and voice actors you’ll easily recognize. Expecto downloadum!

Paladins came out in the same general window as Overwatch on PC, and thus was maybe overshadowed a bit. But the “hero shooter” concept can definitely work on mobile, and Paladins Strike claims it is designed strictly for that platform, with 5v5 topdown play and a wide variety of Champions from which to choose. There’s no end to the love for good multiplayer games the market can support (at least so far), so maybe this can join the big guns.

Different publisher, new adventure, same Major, we presume. It’s time to run and gun again in the finest tap shooter fashion, with more than 50 levels, five boss fights and 20 weapons to unlock and upgrade. We’re also going to go out on a limb and say this game doesn’t take itself 100 percent seriously, which is fine with us. The Evil Villains Corporation will never know what hit it. Probably.

If uniqueness is what you crave in your new mobile games, Still Here is where you want to turn this week. Billing itself as a “2D flight game which takes you on journey through a beautiful dystopian world,” it has a gorgeous overall aesthetic that really helps set it apart from the pack. Float and fly through 15 different quests in a world where humans once lived but are now long gone. Something to chill you out a little bit if you’re too hyped for that Infinity War thing we mentioned earlier.

Not to be outdone in the originality department, Supertype is a physics-based puzzler that also uses letters. How does that work? You really should watch the trailer and not just allow us to describe the concept for you, but the gist is that you can type in the letters you think will fall in the right ways to help you solve each individual level. It looks minimalist and amazing at the same time, and we dig it. Fun with fonts!

Here are 5 new mobile games you should try this week