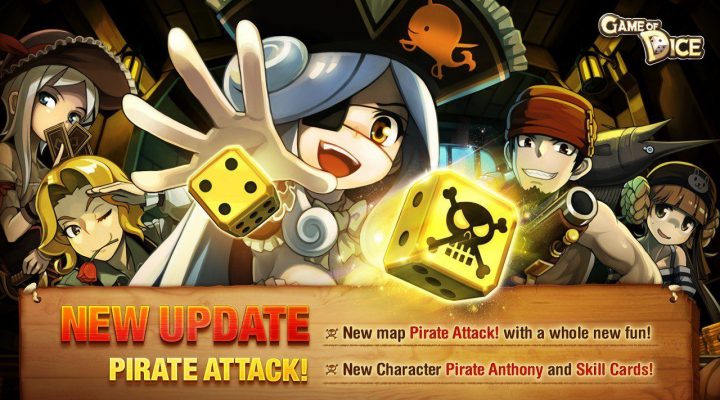 Game of Dice has just received the Pirate Attack update, which adds a load of new pirate-themed content and features to the game.

First of all, there’s a new event map set on a pirate ship that totally changes the toll system to give it a rogueish twist.

The map also includes a twist in the form of island spots like Treasure Island which trigger special skills when you land on them.

If you were more interested in a new character, you won’t be disappointed here. There’s a brand new female pirate character who specialises in Vacation Spot Tolls.

Rounding up the new content is four new themed skill cards and the new Monkey Dice which specialises in Vacation Spots and Toll Increases.

That’s not it though, as the update also includes a few features that improve the overall experience. The best of these is likely the new chat function which lets you discuss tactics with your friends and guild members.

You’ll also find a raised level cap (from 30 to 35) and a bunch of new events themed on Valentine’s day, the update itself, and Chinese New Year. Complete them and you’ll earn a gold, gems, and holograms.

Game of Dice is a mobile board game in which you throw dice and travel around a multi-tiled board, taking all of the real estate you land on. Then, each tie you lap of the board, all of your properties increase in value.

That’s handy, because the aim of the game is to bankrupt your opponents. It’s similar to Monopoly but there are twists, like the 65 different skill cards that can turn the tide in your favour or the various different characters and dice which come with their own abilities.

Game of Dice is available right now from the App Store or Google Play.

Game of Dice Has Received an Exciting Psy-themed Update