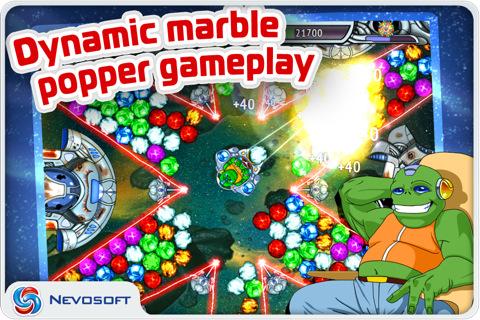 Zzed is a wonderfully unique mashup of classic gaming formulas

Mobile gaming just keeps getting better and better. In the last few months, I’ve played more unique, original gameplay concepts on my iPhone than I have in the last several years on the big-boy consoles. Case in point: Zzed. It’s a great mix of Asteroids, Bust-a-Move, and pool that somehow all seems to work.

In Zzed you play the titular character who wants to be a professional garbage collector, as that will allow him to win the hand of the girl he loves. The story, such as it is, is played out in fun, comic-panel cut scenes between levels. It’s all a bit silly and totally unnecessary, but you do get an urge to see what happens to Zzed next.

Collecting the trash is the main part of the game, of course, and it’s extremely fun to do. As mentioned, Zzed plays like a weird hybrid of a few genres, but they all make sense. The Bust-a-Move­ part comes from launching a colored orb from your ship into the floating colored meteorites. Make three or more of them collide and they’ll disappear. Make enough disappear and you beat the level.

The Asteroids portion comes from the ability to control your ship through touch. You can turn a full 360 degrees and travel to different parts of the level, or attack a different part of the garbage piles. You’ll also be dodging meteorites flying at you, trying not to lose all your lives.

Finally, the pool part comes from Zzed‘s solid physics, where launching your orb causes the trash to scatter and move in realistic ways, allowing you to make huge combos. This also adds an element of puzzle-solving strategy, particularly in later levels.

Amidst all this, the game gives you power-ups that either help destroy like-colored meteorites, destroy meteorites in the vicinity, or help repel flying meteorites from your ship. Nothing particularly earth-shattering, but when you combine it with the rest of the gameplay elements, they make things a lot more interesting.

On top of all this, Zzed features 60 dynamic levels. The levels aren’t all just wave after wave. Some boards require serious finesse, as they have borders and other hazards to navigate. The meteorites will also cluster in different ways depending on the shape of the board. Mix in the flying hazards, and it gets clearer just how challenging – and fun – Zzed becomes. 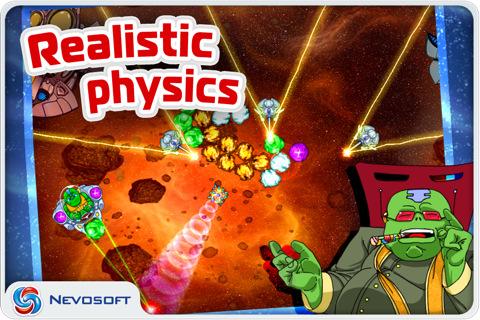 The game’s presentation is great. Colorful graphics, pulsing synth soundtrack and cute character design give Zzed a real personality. The panels are well-drawn too, making level progress a real pleasure on top of the natural progression.

The only real difficulty with Zzed lies in the control. It’s not that it’s bad, per se, but rather that it takes some getting used to. Learning to drag your ship around while rotating it, firing it and avoiding collisions is difficult at first. You’ll have some serious challenges by the third zone if you don’t get the control down first.

And in spite of all that Zzed offers, there’s a big omission: multiplayer. The ability to play against someone else, competing for scores, sending meteorites their way… I don’t know why this kind of major gameplay mode was omitted. If this were included, the replay value of Zzed would go through the roof.

Finally, a reminder to all non-English gaming developers making English games: please hire localizers. The grammar in Zzed gets a little weird, and words like “catched” shouldn’t be there.

Zzed is a fantastic arcade/puzzle/action game that’s really a blast to play. It’s definitely worth the download, and shows some great creativity from another independent developer. Keep ’em coming, folks!