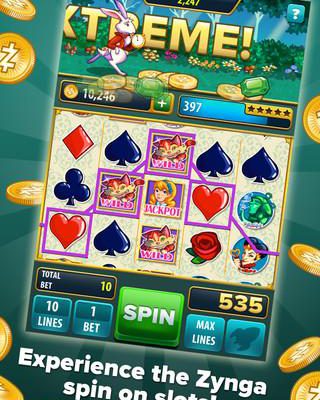 Slots games are still among the most popular genres of social and mobile games. Zynga is a giant in the former category and always looking to expand its presence in the latter. Thus, it was probably fated that Zynga Slots would come our way, giving iOS gamers a chance to experience high quality free slots play bathed in full coats of Zynga’s trademark cutesy art style and whimsical sensibilities.

Free to download in either its regular (iPhone) or HD (iPad) versions, Zynga Slots gets players into the spinning action quickly with an introductory allotment of Z-coins. The Alice-themed Wonderland machine is a good one for beginners, as it has just enough features to be interesting without so much going on that it overwhelms people who don’t generally play slots games. 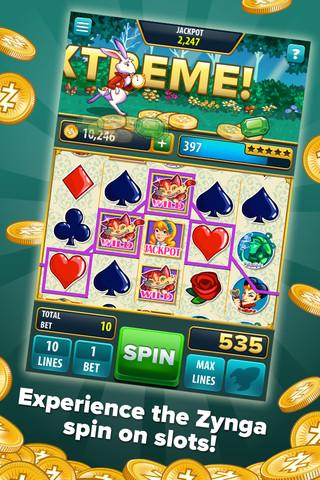 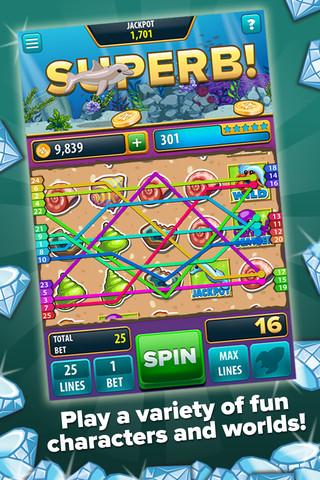 Literally atop the five-reel playing field, the March Hare advances toward his very important date. Each spin gets him closer to his goal, which places the game into Fever Mode – a mode that looks like it will be featured in all of the game’s machines – and temporarily boosts the wins from each spin. Wonderland also offers scattered Bonus symbols that activate a game where free coins can be won by picking pieces of a puzzle, plus a progressive jackpot that ramps up at a speed directly related to how many friends you have playing the game.

Every coin played through the machine helps fill an experience bar which grants a star upon completion. Stars not only unlock new features on the current machine (like extra paylines, higher max bets and more Fever Mode time), but in a manner similar to Zynga Slingo, they also serve as the mechanism for unlocking more machines. Along with generic slots like the nautical Sea Whirl’d and monkey-focused Bananigans, players can also gain access to machines based upon past Zynga hits. It should only take one guess each to figure out what inspired FarmVille Frenzy and Slots With Friends.

The trademark sugary sweet Zynga graphics are in full effect here, which isn’t necessarily a bad thing unless you’re the type who tired of it from playing the company’s Facebook hits. It’s a great looking game in any case, especially on the new iPad’s retina display. The sounds are also good, avoiding the slots game hazard of being too repetitive after a number of spins. 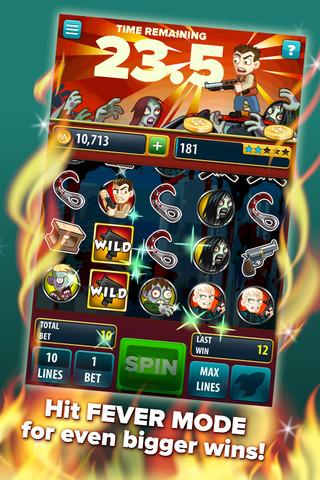 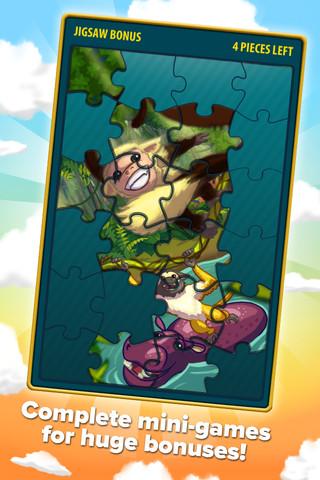 Anyone familiar with Zynga’s work will probably not be surprised to hear that the game makes it extremely easy to buy more coins with real money. The smallest amount is 400 coins for $4.99 (and that has the potential to last about two minutes with some unlucky spins), and the “best value” is 25,000 for $99.99. Bonus coins arrive for free five minutes after the previous bonus is claimed, but the bonuses are small enough that it’s easy to see how regular players might feel cynical about how hard Zynga Slots is working to worm its way into their real world wallets.

Other features are kept to a minimum. There’s a friends list, naturally, and the promise of boosts to purchase in the near future. If this was one of Zynga’s Facebook efforts, it would probably feel half-baked as a result.

It’s not, though, so keeping things simple works. Zynga Slots won’t wow with its gameplay, but does score high on ease and personality. It has that subtly addictive quality that the company does so well, and it’s likely to have many people who never play slots games downloading it soon just to check it out.

The Adventures of Shuggy Review