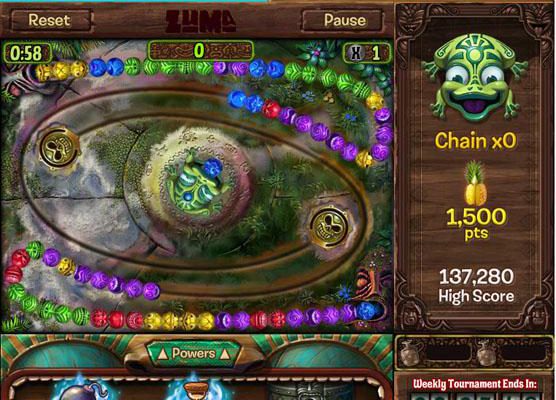 Zuma Blitz is an implacable foe of getting things done. It waits for you on Facebook, promising a brief burst of joy and color to brighten up breaktime, downtime, or writer’s block. It a bit like opening a bag of potato chips: you keep telling yourself “Just one more!” until suddenly the bag is empty. Zuma Blitz is a perfectly balanced blend of arcade action and level-based progression that takes the format of Bejeweled Blitz and improves it with power-ups that are easier to use and the ability to level-up and get a steady stream of rewards.

Zuma Blitz is a game whose quality and polish well exceed that of most other titles you might play that have been on Facebook for years. There’s none of the usual launch lag, instability, lost progress, or missing features. That’s good, because Zuma’s action-based gameplay would completely fall apart in an environment that failed to run smoothly.

In Zuma Blitz you launch colored balls at groups of other colored balls with the same pinpoint accuracy you can in the downloadable Zuma. Match three or more and you’re rewarded with points. All of the usual scoring rules apply, although power-ups work a bit differently. 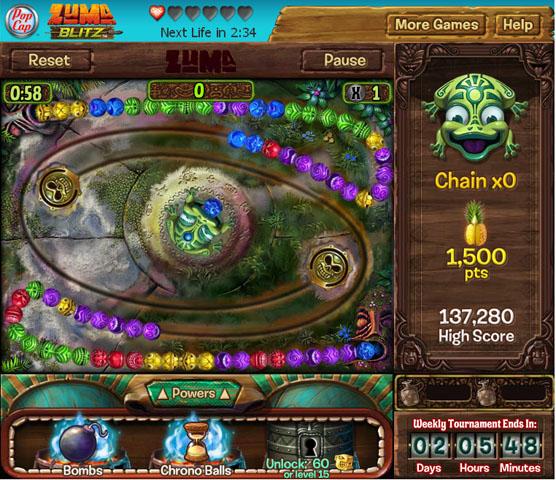 Power-ups spawn randomly, but you have to buy them before they’ll be active in a game. The virtual currency you spend to gain power-ups is Mojo and you earn a little Mojo every time you play a session. Which power-ups you can buy is dictated by your experience level. You earn a little XP every time you play a game and can buy potions to level up more quickly. Every game where you wish to use particular power-ups, you have to pay their full Mojo cost. If you really like using power-ups all the time, then you’re eventually going to run out of Mojo and have to spend real money on potions that replenish it. 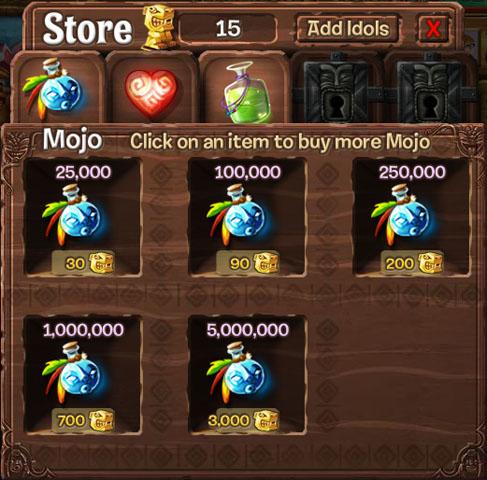 The power-ups are mostly familiar from older Zuma titles, though there’s also some surprises like a version of Bejeweled Blitz’s Last Hurrah. At first you can use only one power-up at a time, but can unlock more power-up slots as you level up (to a maximum of three). Playing with various combinations of power-ups is a good way to customize the game and build a strategy that suits your personal approach to gaining points. Other score multipliers like fruit and Mojo bonuses from shooting treasure chests keep game sessions lively. 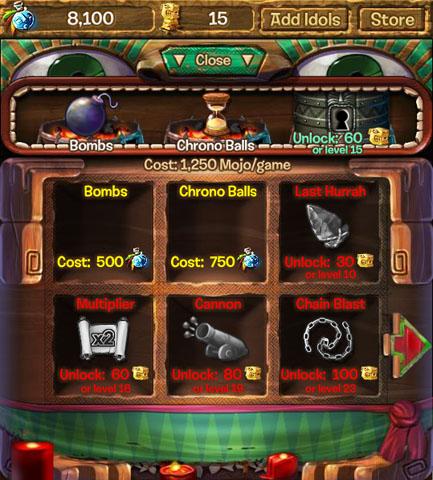 With Zuma Blitz, PopCap Games have successfully taken what worked so well inBejeweled Blitzand improved upon it in many ways, especially how power-ups are incorporated into gameplay). Barely a few minutes old,Zuma Blitzisalreadyan excellent game that deserves our highest rating.

Please note: This game is being launched in stages to ensure load balancing and etc. – if you don’t have access yet, check back again very soon.