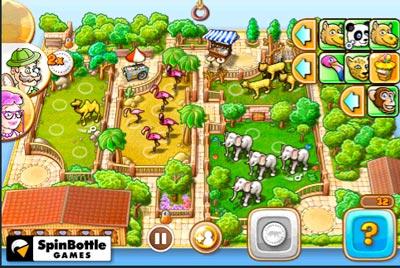 After playing Zooloretto, the digital version of the board game of the same name, I’ve come to the conclusion that running a successful zoo boils down to two things: First and foremost, don’t make flamingos and cheetahs share the same personal space, and always make sure you have as many vendor stalls as possible.

Since it’s based on a board game there’s not much of a story to Zooloretto; it’s really an abstract game with a thin veneer of theme applied on top. Each player takes on the role of zookeepers tasked with filling their pens with matching animals. The zookeeper angle serves to give players a hook, but all you’re really doing is making “sets.”

Players take turns drawing tiles that typically have animals on them but sometimes are vending stalls (bonus points) or coins that enable you to expand or buy animals. Players put these tiles into different delivery trucks (one for each player) up to a max of three tiles. Each player gets to take one truck per round and put its tiles into their zoos.

Your zoo has three paddocks of different sizes to put animals in, and you can only put one type in each. (No mixing elephants and camels here, people.) If you have more breeds of animal than you do available enclosures you can pay to expand or put the random animals in your barn. Shoving them in the barn subtracts points though so it should be avoided.

Points are scored based on how full the enclosures are and what vending stalls are open for business. Points are tallied and the highest score wins. It’s a nice, light game that has some strategy, but doesn’t go very deep.

The tutorial does a great job of introducing you to the control scheme as well as the basic rules. However it seems to end before they’re done explaining everything and never get into specifics. There’s a manual in the main menu that explains it all, so they do make it available, you just have to read it. Also, you can’t access it while you’re playing a game so if you need to check something you need to quit the app, restart it, read the manual then go back into your save game.

Tutorial problems aside, the game is a fun way to kill 10-15 minutes, which cosmically works out since that’s the typical length. The game saves when you exit so you can always come back later if you don’t finish. The cartoony art style makes collecting the animals fun and I hear my wife giggle every time some of her animals create a little baby. It’s the kid-friendly management game that I think would be fine for anyone over seven. 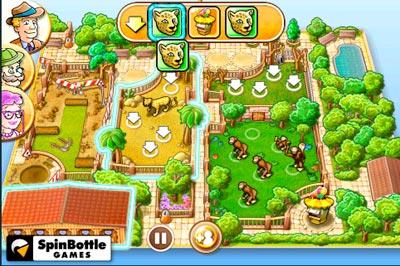 One of the best parts of digital board games is that the software takes care of all the rules and scoring for you. You can’t forget to give yourself points or make an illegal move. Having played the board game version I’m happy to say this is an excellent and faithful recreation of the game, in some ways better since in the board version you’re just playing tiles while here you have animated animals.

I really only have one complaint about the game and that’s the combination of lackluster artificial intelligence (AI) and the lack of an online multiplayer mode. The computer-controlled players make some strange decisions sometimes and it would’ve have been super nice to be able to play against people online. The game has a “pass and play” option, though, so if you have friends sitting around in a circle you’re all set.

With the full retail board game costing north of $40, it’s easy to justify the much lower price for this version, especially if you want it portable or don’t have friends around to play against. Lack of online and occasional weird AI choices hurt, but Zooloretto is adequate for those of us that want to take our board games on the road.