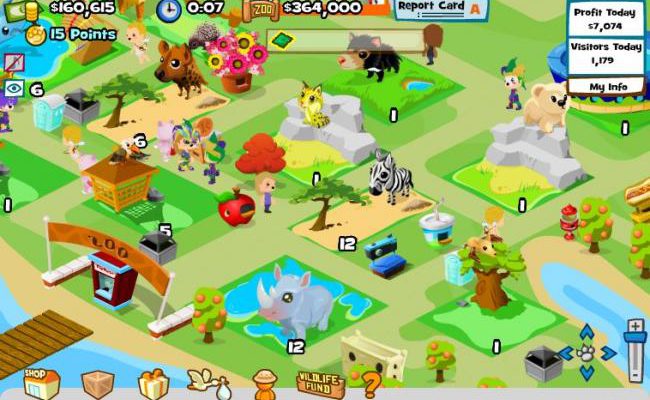 Still in its infancy, Facebook gaming seems to have tackled every type of animal game we can imagine. You can milk cows in FarmVille, raise kittens in Happy Pets – some games like Pet Society that let you treat animals like little people. Zoo World attempts to tackle a somewhat different niche and places you not in control of the animals, but of the zoo itself.

Zoo World is a tycoon game that places you in charge of an ever-growing public zoo. Like any good tycoon game, the object here is raise the financial value of your zoo while keeping all of your customers happy. This means providing adequate parking, restrooms, shopping and food in addition to maintaining a large assortment of animals as your main attraction.

Like many Facebook games, Zoo World is a largely menu driven affair. You’ll need to select animals, buildings, and other amenities from a series of menus that act as a shop of sorts. Unlike other games where the gameplay seems to be well-balanced between menus and in-game activity, however, the majority of what you’ll be doing in Zoo World is in the menus themselves. You can visit your zoo, but asides from placing new exhibits and shops there’s very little to actually do there. 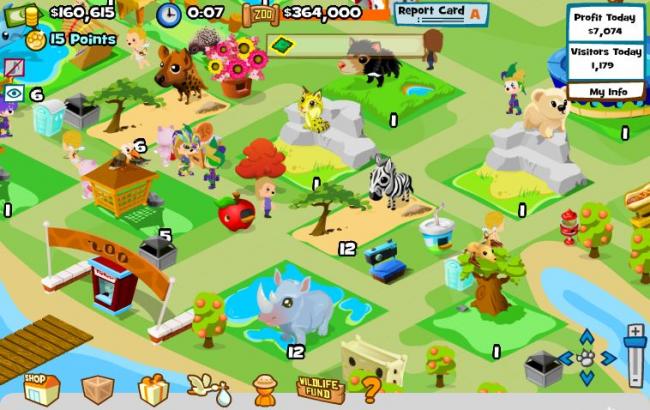 Menu-driven gameplay doesn’t necessarily equal bad gameplay, though. While Zoo World is a shopping-heavy affair, it’s never without purpose. Each new breed of animal you purchase will improve the value of your zoo and unlock even more critters to buy. A unique levelling system provides a great incentive to purchase specific items in the shop, so that you’ll be able to evolve your zoo well past its current state.

The levelling system in Zoo World is easily the games most striking feature. Instead of earning experience points for completing certain basic tasks, you can only reach a new level by completing certain achievements. “Buy a total of 8 small trees,” for example, or “get five reptiles.” Each level has a set number of achievements you’ll need to complete to progress to the next. Facebook games have never really explored outside of the customary “earn XP, level up” formula before, so it’s nice to see a game not only try something new but to succeed so well with it. Unlike generic levelling systems, this one makes sure gamers are exploring everything the game has to offer by providing specific objectives for players to tackle.

Achievements aren’t the only reason to spend time puttering around the menus. Your zoo will also receive a report card to let you know how well it’s performing. The report card will highlight areas of concern ranging from cleanliness to worker satisfaction. All of these can be addressed through – you guessed it – more shopping. 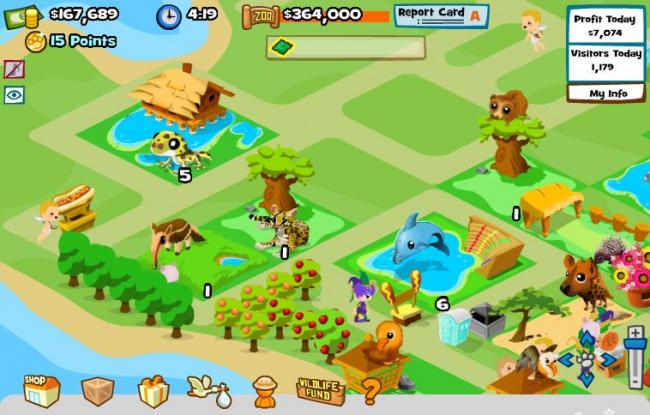 While Zoo World does a good job of offering up some basic tycoon elements that are accessible to everybody, it does so by sacrificing the depth and challenge that one often finds in the genre. We were also disappointed by the fairly weak social aspects here. You can offer up animals to your friends, send gifts, and visit their zoos – but all in all there’s very little interaction with your Facebook friends here. The game has recently unveiled a new racing aspect in the menu that has you recruit friends to your team, but it’s an element of the game that is admittedly in preview and doesn’t really feel engaging enough to be worthwhile.

Staffing your zoo, filling it with wild species, and managing ticket prices is all well and good, but we would have really enjoyed things more if the game trusted us to manage more tasks in the actual zoo. Zoo World is a nice light simulation for the wildlife enthusiast, but as a business simulation it’s not going to win any awards. Still – if breeding bald eagles is your thing, Zoo World is definitely a Facebook game worth dabbling in.