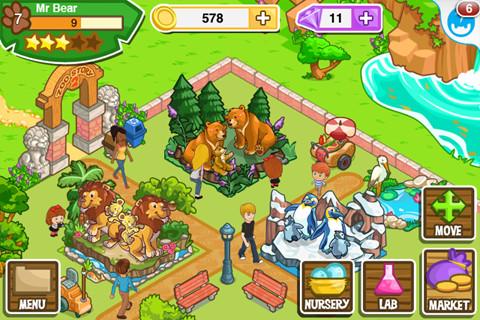 Not too long ago mobile games developer TeamLava released Pet Shop Story, and hot on its heels comes their latest social app, Zoo Story 2. Combining mechanics of the previous title with the original Zoo Story, the business simulation comes with all the familiarity players are used to. Unfortunately, that also means there isn’t a whole lot of innovation at the heart of the title, but at least TeamLava incorporates a bit of discovery in the game through animal breeding.

A standard TeamLava app, Zoo Story 2 centers itself around developing a thriving virtual space, tasking players with the construction of various animal exhibits and attractions. The nature of the job is not too difficult though, as it pretty much consists of selecting something to build and tapping its placement location on the map. Once placed, it will periodically earn players a bit of coin and experience.

Fauna runs the gamut from lions to forest tree frogs, making use of watery eyes and oversized, cutesy renditions of each creature to create appeal. Like Pet Shop Story, that appeal is increased by the ability to create larger families of each group, up to four, that allow for fancier looking habitats. It works identically to the noted title in that once an exhibit is completed, a mate can be purchased and up to two babies can be bred. Depending on the creature, this will take anywhere from a few minutes to several hours to occur and initially, only one baby can be grown in the nursery at a time (unless users pay for virtual currency which is used to unlock more nursery slots).

Along with the animals, Zoo Story 2 also supports several “attractions” that players can also place around their game world. These are a bit less involved and consist of things like rides, snack stands, and gift shops. Each payout a select amount of coin every so often, with the time frame varying based on the level of the object placed (those that take longer pay more).

The game doesn’t truly feel interesting in any way until players unlock the ability to cross breed their animals. Indicated by a pink flask icon, and upon reaching a certain level, players can breed relatively similar animals in order to discover new species all together; some of which may be extinct. It can take several hours for the breeding to complete, but it is a nice bit of discovery as there are a tremendous number of animal exhibits to build in Zoo Story 2, yet only so many are available for direct purchase. 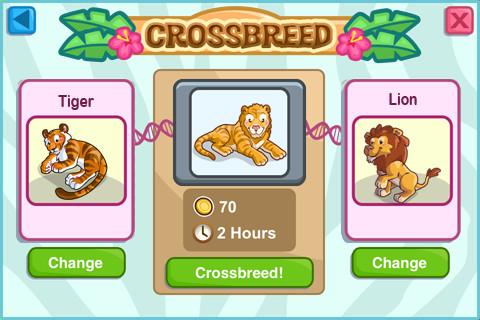 Another means of uncovering new exhibits is through a collection system. Most of the time, such mechanics feel rather superfluous, granting players trivial amounts of currency or experience. Here, however, the rewards are actual animals that can be placed around one’s zoo.

Unfortunately, the novelties of the application run dry when moving into its social credentials. Once again, TeamLava moves into its formulaic design of allowing the standard gifting and visiting of friends’ zoos. Also, like every Story game before it, Zoo Story 2 allows players to visit other random users from around the community. Upon doing so, the visitor can “tour” various, zoological attractions (five times per person) to give them boosts to things like experience gain. Upon doing so, “social points” are earned that will place the visitor’s zoo higher in the community page so that other random users visit them as well.

The fact of the matter is that while Zoo Story 2 is not a bad game. Truthfully, it is well presented for the type of game that it is, has a decent sound design, and its cute aesthetic works well for the demographic it is targeting. Nevertheless, it is far from exciting and barely innovative, corralling each new TeamLava game into an expectation of monotony. At most the new games have one or two new, and minor, features. The constant iteration is a bit tiring. That said, the game is still an enjoyable new visual flavor on a popular, if stagnant, genre.