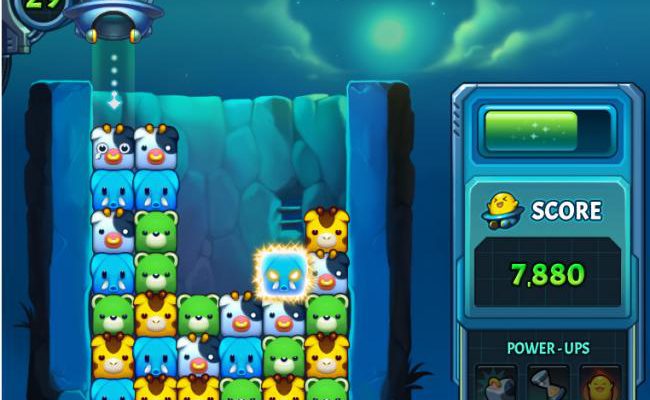 Zoo Invasion will abduct your time, and maybe even your heart

With the Facebook game market getting more and more crowded, it’s becoming increasingly difficult for developers to make their titles stand out. Maybe that’s why Nexon has opted for a truly bizarre premise for their Match-3 puzzle game, Zoo Invasion: you, as an alien, stack animals and then abduct them. Oh, no! Simba! To be fair, playing as an alien with grey morals does give Zoo Invasion its own identity, and it’s a pretty nifty puzzle game to boot.

For a game that’s about taking animals from their native homes and into the freezing vacuum of space, Zoo Invasion is gosh darn adorable. Every time you start the game, you’re presented with a screen full of cuddly-looking animal blocks: elephants, bears, cows, giraffes, lions, and the like. As the alien, you must “beam” up animals and drop them so that they create lines or stacks of three or more. Once you create a stack, it disappears (beamed off to Tralfamadore, presumably) and you earn points. You earn even more points if the match-up process results in a chain reaction. 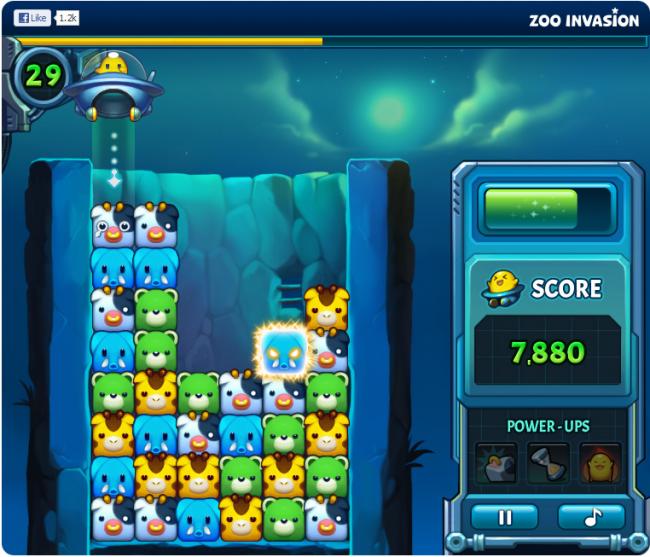 Zoo Invasion runs on very basic Match-3 mechanics, but it has one twist: you have sixty seconds to do your thing. When time runs out, your score is tallied up, and you get to see where you stand versus your pals who are also playing the game.

Zoo Invasion is definitely a title that was engineered for people who want to get a quick game in during a commercial break, or even while their boss fumbles with his crashed Power Point presentation. It’s not a calming Match-3 puzzle experience like Bejeweled or any of 10tons’ games, but exists only to challenge you to score as many points as possible—and, to be honest, you’ll take that challenge over and over. Zoo Invasion is a pretty addictive game, though be aware that you’ll burn through your store of plays very quickly. If you want to keep playing, you’ll need to beg your friends for energy, wait around for it to refill, or just cough up some actual coinage.

A word of warning if you do sign up pull animals into space: the cutesy-wootsy soundtrack for Zoo Invasion will induce madness in record time, as will its cheery sound effects. The game lets you mute music and sound, and it’s not a bad idea to use the option.

Zoo Invasion is a solid match-3 game, and pushing yourself to do your very best before your minute is up is a fun challenge. If you’re into the match-3 sub-genre, you may want to think seriously about getting into wild animal abduction.