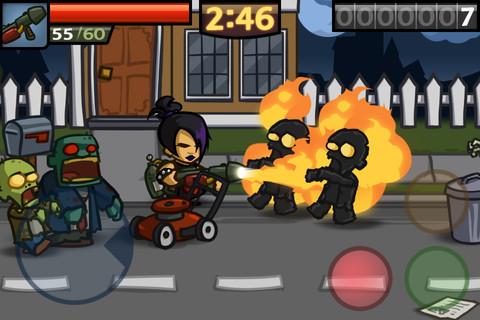 Slaughter the undead this Halloween with Zombieville USA 2

The 31st is the hallowed and the undead are out in force. To combat the menace, developer Mika Mobile is seeking to train our apocalypse survivors with its latest title, Zombieville USA 2 on iOS. Okay, perhaps “train” is a bit too strong a term, but it’s a game where users can mindlessly slaughter hordes of undead with style, and some really big guns, in a quasi role-playing fashion.

For anyone not familiar with the iOS games of Mika Mobile, they are the creator of popular games such as OMG Pirates!, Battleheart, and the original Zombieville USA. In line with the design patterns of some of its previous apps, Zombieville USA 2 comes with no real premise or story beyond “here are some zombies, shoot them.” For many, this might seem a bit dull, but considering the title is currently sitting within the top five (currently #1 on iPhone and #2 on iPad) paid applications in the Apple App Store, it seems more than good enough.

A side-scrolling game akin to the arcade beat’um up titles of yesteryear, players use a virtual analog stick to move and a trio of buttons for attacking with different weapons. The idea, is to travel the infected city streets and kill as many zombies as possible in the time allowed; preferably without dying. As players progress in the game, the undead will begin to appear in various forms that are fairly standard in terms of challenge. Some are slow and weak, but attack en masse, while others are faster or take more damage. Regardless, players are able to gauge the difficulty of enemies in a level well before they dive into the fray.

When players prepare for a mission, its difficulty is measured by an “Infection Level.” The higher the level, the more dangerous it will be. However, in order to unlock more dangerous regions of the world, a certain number of zombie kills are required. That in mind, players do have to replay the same levels over and over, somewhat frequently. Some players might get a bit bored with this, it’s true, but the killing of zombies is so gratifying that it really doesn’t make much of a difference.

This gratification grows as players play more anyway, as killing zombies (and other random environmental objects) will result in dropped ammunition for the current game as well as cash. This cash is then turned into one of three things. On a merely aesthetic level, players can buy new avatars to slay with. On an RPG level, they can buy skills, equipping up to three, that can augment their character with bonuses such as dealing extra damage. On a pure zombie splatter level, players can buy close to two dozen guns, with three equipped at any given time.

From the basic shotgun and pistol to flamethrowers and rocket launchers, the cartoon brains of the undead have never looked quite so good. It can be a bit slow to earn significant rewards early on, but once players get into a bit of a groove, Zombieville USA 2 is a wonderful time waster that, ironically, doesn’t require much of a time investment to enjoy. What makes it even better though, is that it can all be played with friends through a cooperative mode via Bluetooth or WiFi. 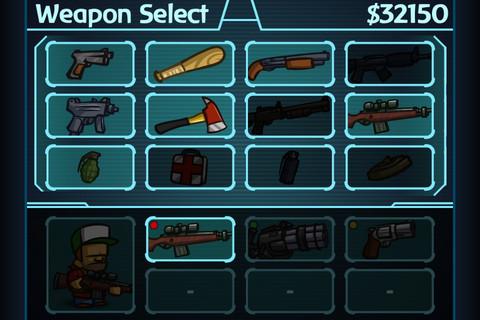 In terms of challenge, the game keeps even experienced players on their toes as well. Zombies may typically be slow and shambling, but as users advance in the game, the numbers become startlingly high. What makes this particularly dangerous is that should players get hit, they will be slowed down to a crawl while providing a brain feast for walking cadavers until the zombie either dies or the player gets away (usually the former). Moreover, enemies don’t meander slowly from off screen. They tend to sprout up out of the ground like flesh eating turnips.

Combine all of this with Mika Mobile’s fantastic and light-hearted visual style, and Zombieville USA 2 more than earns its top ranked App Store slot. The controls are simple and anyone can pick up and play the game without getting frustrated. Moreover, it is gratifying without requiring a significant time investment. With its slew of weaponry to unlock, along with co-op play, it’s an app that offers several hours of potential play time. At worst, the only issue it could be considered to have, is that there isn’t any real premise or purpose to what the player is doing other than “kill stuff.” Nevertheless, that concept, at least for Zombieville USA 2, is more than enough fun on its own.