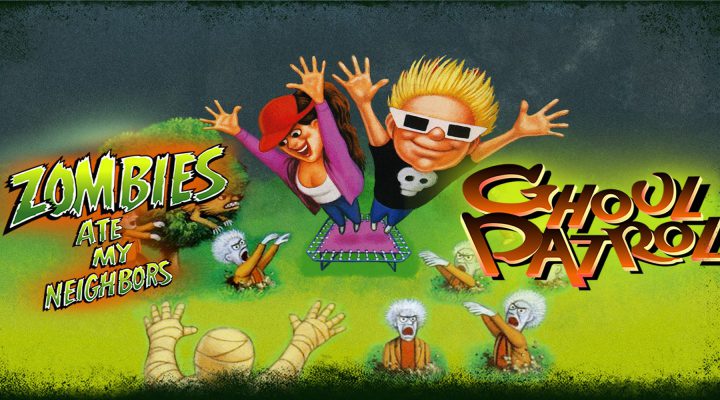 Games don’t come much more loved than Zombies Ate My Neighbors. Released on the SNES and Mega Drive in 1993, it’s a top down co-operative shooter which is still good fun to play with a friend.

Sadly age has made some of its foibles even more glaring, and this port (which throws in sequel Ghoul Patrol) largely fails to address them – meaning this is a trip only those with nostalgia for the game will want to take.

Developed by Lucasarts (yep!) the game is a back to basics arcade style experience. You’re thrown into small stages full of various monsters – such as the titular zombies – and have to either avoid or destroy them while rescuing all the various members of your neighbourhood.

And that’s really it in terms of set-up, but there’s so many different enemies and locations thrown your way it never feels dull. Mainly as you’re always up against it, for a range of reasons. This isn’t an easy game, especially by today’s standards.

Unlike something like Robotron which has a twin-stick control scheme this has a far trickier set-up for example. You can only shoot in the direction you’re facing.

Although this sounds simple enough it means you can often feel overwhelmed by the action unfolding onscreen, and incapable of dealing with it all. Even with another player by your side.

Still this uncontrollable havoc is part of the game’s appeal, and the range of weapons make sure you’re rarely outgunned.

Sadly there has been a reluctance from DotEmu to make this a port everyone can enjoy, as although you can save your progress anywhere you’re still generally required you to learn the levels by dying repeatedly – chipping your way through via trial and error. Something we imagine many modern day players simply won’t have time for.

Other issues include the inability to map buttons (so the original SNES button set-up can’t be used, bafflingly) and the fact that Ghoul Patrol simply isn’t very good – meaning the game’s value falls squarely on the shoulders of Zombies Ate My Neighbors.

Ultimately Zombies Ate My Neighbors is a good game that’s sadly been poorly treated with this port. There’s not enough that’s been added in here to make it worthwhile for those who have fond memories of playing it back in 1993, and the rough edges will likely put off most newcomers.