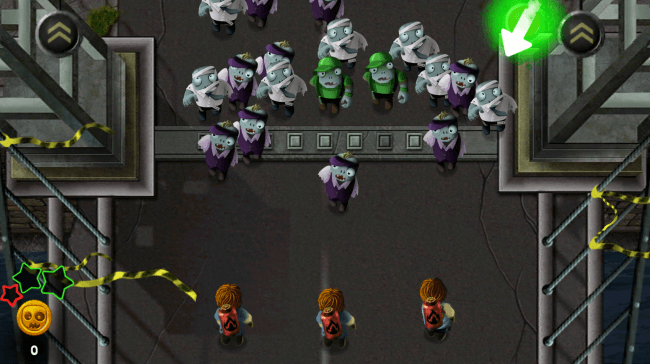 There’s always something that turns ordinary people into rabid, brain-munching monsters, and in Zombie! Zombie! Zombie! it’s a space rock that falls from the sky. This glowing boulder lands in the desert where the military quickly transforms its desolate landing site into a high-security research lab. As happens so often at such facilities, something goes terribly wrong. The rock infects everyone there and soon after, scientists, soldiers, and lab technicians pour from the compound, googly-eyed and drooling. Your job—along with two of your most enthusiastic gun-toting friends—is to take each and every one of them out.

Zombie! Zombie! Zombie! is played from a top-down perspective with a three person squad located at the bottom of the screen. The zombies approach from the top through rubble-filled city streets, over train tracks and across bridges, and you pick them off with standard-issue machine guns. It’s pretty straightforward, but the game does offer an interesting twist in its unusual approach to match-three. Match-three here is much more organic, and completely avoids the whole colored icon/grid idea. It also eschews the notion of swapping icons and instead employs a uniquely dynamic method of matching three.

Zombie! Zombie! Zombie! heavilydepends on its gameplay to sustain it, since itsgraphics and sound are really pretty basic. The color palette is on the drab, gray-green end of the spectrum, and the characters aren’t particularly attractive. Still, the match-three is unique and quickly becomes challenging. This is due mainly to the fact that zombies appear and move at different speeds, a fact that can be used strategically once you know what you’re doing. Once you’re comfortable with the mechanics you can also match multiple groups of three to create combos. Combos reward you with powerful special attacks, and I must say when things really get hairy, there’s nothing like a maniacal sword-wielding ninja to level the playing field.

In addition to strategic matching, the key to winning at Zombie! Zombie! Zombie! is timing. Some game locations contain useful environmental hazards like passing trains and heavy construction machinery that can be charged up and used to catastrophic effect. These work on a cool-down timer, and as such, must be used intelligently at critical points. Of course, if you’re interested in spending in-game “coinzzz” or better yet, actual money, you can stack the deck in your favor by buying various one-use power-ups (like exploding manhole covers and jowly attack dogs) that can be used whenever you like. Which brings us to the main problem with Zombie! Zombie! Zombie!. 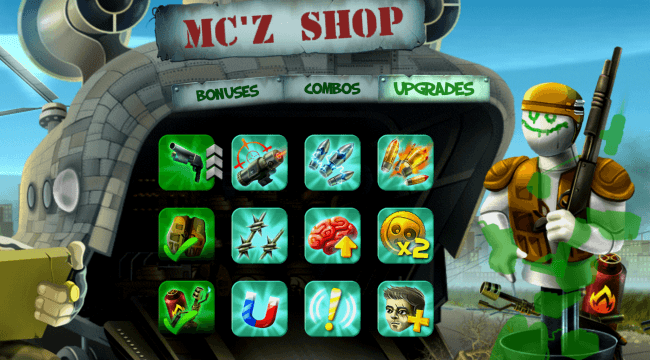 Social games are still trying to find the right balance between making a profit and giving players good free-to-play value. Fall too far one way, and your audience feels cheated; too far the other way, and your development company goes bankrupt. Zombie! Zombie! Zombie! starts fairly easy but quickly ramps up to a high level of challenge. Different objectives such as beating the level within a set number of matches or collecting a set amount of coinzzz become more and more difficult as zombies move faster and become more numerous. Even the most agile gamers are likely to struggle to survive and find their three-life supply quickly depleted. When they hit that wall, they’ll see their game sessions shrink to between five and ten minutes; they’ll also see that the only way to extend them is to pay. Continuing upon death costs $.99, and power-ups, combos, upgrades, and additional squad members cost anywhere from $1.99 to $19.99.

This money-centric state of affairs will of course be minimized or exaggerated depending on your skill as a zombie-killer, but it still marks an obvious imbalance in Zombie! Zombie! Zombie!‘soverall free versus paid gameplay model. The problem also extends to the game’s Survival mode, which offers a limited form of free play but emphasizes three better forms that cost between $.99 and $2.99.

Zombie! Zombie! Zombie! is a fun little diversion—for a little while. Although it does offer an interesting match-three concept, it’s a bit too purchase-dependent considering its gameplay limitations and low-level aesthetic. As such, it’s an ideal game for two distinct types of people: skillful zombie-hunters with fast reflexes, or committed zombie fans with unusually deep pockets.