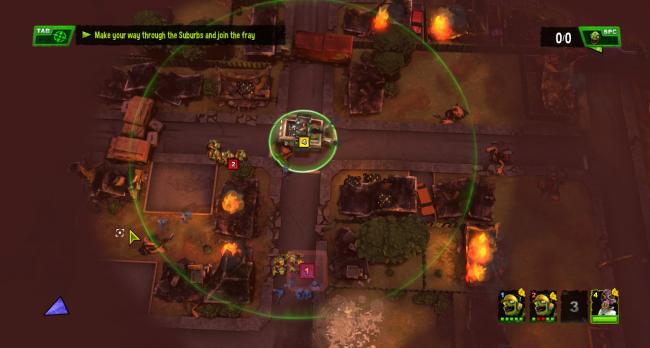 So simple a zombie could play it

Zombie Tycoon 2: Brainhov’s Revenge is a sort-of-cute, vaguely-horrific and highly-streamlined real-time strategy game that wraps you in the lab coat of Orville Tycoon, a lab assistant who betrayed his mentor, Dr. Archibald Brainhov, stole his zombie-making formula and set off to conquer the world with hordes of subservient undead.

But as you might surmise from the title, Brainhov isn’t going to put up with this kind of guffola without a fight, and so it’s Shamblers vs. Ferals (vs. police, the army, some mutant monsters and a whole bunch of hillbillies) in an all-out battle for supremacy.

Familiarity with the original Zombie Tycoon (which, for the record, I don’t have) is handy for understanding certain points about the sequel, like why Dr. Brainhov is a zombie and what Orville did to make him so angry. But if you can manage to avoid getting too hung up on the finer points of the plot – and believe me, that shouldn’t be a problem – then Zombie Tycoon 2 works perfectly well on its own. Essentially, it comes down to this: There’s a zombie holocaust, it’s your fault, and now it’s time to dig into the buffet o’ brains.

As a real-time strategy game, Zombie Tycoon 2 is extremely simplified. You control a maximum of two squads of zombies, plus a unique monster and a zombie-making mastermind; first Tycoon, and then midway through the game, Brainhov. Each squad has five zombies, which are replenished automatically as needed, there are no resources to collect or buildings to place and instead of two factions fighting over a battlefield, each mission is based on accomplishing a specific and very linear set of objectives.

That’s not to say that there isn’t plenty to do. As you move through the devastated streets of Finkleville, you can capture hardware stores, martial arts theaters, sports centers and other buildings that will allow you to convert your zombies into more powerful units with special abilities, like zombie engineers who can operate machinery or zombie scouts, who travel undetected and regain health when not moving by burrowing into the ground. (They also serve as a very nice homage to another, rather more famous game about zombies.) 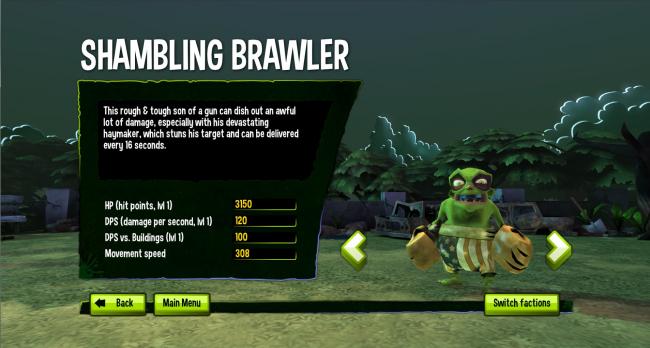 You can do the same to any houses you discover, which will provide you with “roaming zombies” who can’t be controlled directly but will automatically defend their homes and neighborhoods from enemy aggression and also take part in “Dead Rushes,” presumably a play on the “Zerg Rush” of StarCraft fame, in which they all come together and run around the map causing havoc.

The game’s two primary factions play on the pop-culture competition between the classic, old-school “Shambler” zombies and the more modern, fast “Feral” zombies, but in practice there’s almost nothing separating the two but color and wardrobe, as each side has access to the all the same classes. Regardless of which side you control, you’ll also face off against an overwhelmed police force, tougher and more heavily-armed soldiers and the shotgun-totin’, zombie-hatin’ hillbillies of Big Red’s Woodland Resort. At times you’ll even have to get the job done without zombies: The first mission as Dr. Brainhov, for instance, requires you to maneuver him through Big Red’s campground while avoiding capture in what is, to be frank, a not-terribly-fun exercise in top-down stealth.

That bit notwithstanding, the single-player campaign is reasonably entertaining but not terribly difficult; the sort of thing that will keep very casual RTS fans and youngsters who haven’t yet graduated to StarCraft amused for a half-dozen hours or so. In fact, Zombie Tycoon 2 Executive Producer Martin Brouard said in the game’s Steam Greenlight video (it was approved for Steam release on December 9) that its real strength is actually not the single-player campaign but multiplayer action. “The single-player campaign pits both zombie factions against each other in a race to destroy the last human stronghold,” he said. “It will teach you how to master your zombie squad and your monster unit in preparation for the awesome deathmatch mode.” 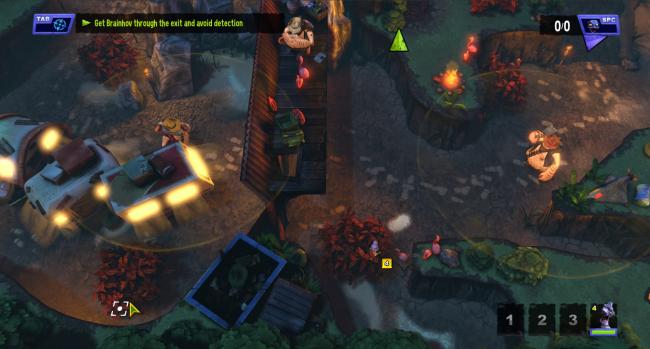 Deathmatch is fun, but it’s limited, too. You can invite a friend if you happen to have any who play the game (I didn’t) or opt for a “quick play” that hooks you up with a random stranger if one is available, but there’s only one game type – destroy the enemy mobile spawner before he can destroy yours – and one map to play on. I also had trouble actually finding people to play with, although in the game’s defense it just launched on Steam a few days ago and so the player base is likely and understandably still quite small at this point, and so I may well be missing out on deeper strategic and tactical layers.

I don’t think so, though. The strategic element feels very limited by the unchanging scenarios and the fixed, tiny size of the zombie army and the units available to it – but mine is the voice of inexperience so take it for what it’s worth.

What I can say with confidence is that Zombie Tycoon 2: Brainhov’s Revenge is cute, at least as far as “cute” can go when you’re masterminding the wholesale slaughter of terrified civilians, lightweight, accessible, well-produced and polished, and will no doubt be a good bit of fun for kids who get a bang out of zombies. More experienced strategy fans, however, will probably find it a little too thin for their liking.