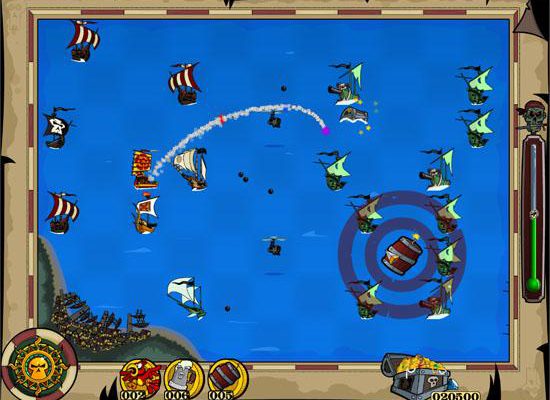 You may have noticed a fair number of zombie games being released over the past year – the undead are clearly the in-thing at the moment. Not only does Zombie Pirates feature brain-munchers, but it also takes inspiration from another recently zombie game, namely PopCap’s wildly popular Plants vs Zombies.

Zombies Pirates puts a sea-faring spin on the tower defense concept, pitting you against an evil zombie pirate invasion. There’s so much to love about this game, and it’s the kind of title that will have you saying ‘just one more game’ plenty of times over. 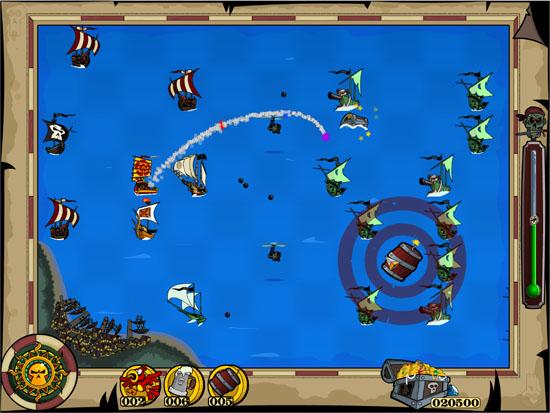 When nasty pirates attack an innocent vessel out at sea, the captain and his crew are left to die, while his lady Marisa is stolen away. In a chilling twist, the captain and his men come back from the dead as zombies, and proceed to attack every port and coast in the search for Marisa.

Meanwhile, the pirate Smiling Jack O’Hurlihan is minding his own business when the zombie fleet attacks. You take control of Jack as he attempts to destroy the zombies and return the world to normal, so he can continue his plundering in peace. It’s a bit of an odd story, as it’s difficult to work out who the actual bad guy is in all of this!

Play begins with your ship on the left-hand side of the screen, and zombie pirates sailing in from the right. Your job is to keep the zombies at bay, and not let them leave the screen on the left. Your ship automatically fires at enemies when they are in range, so you’ll need to strategically move it into a good position for taking the zombies out. 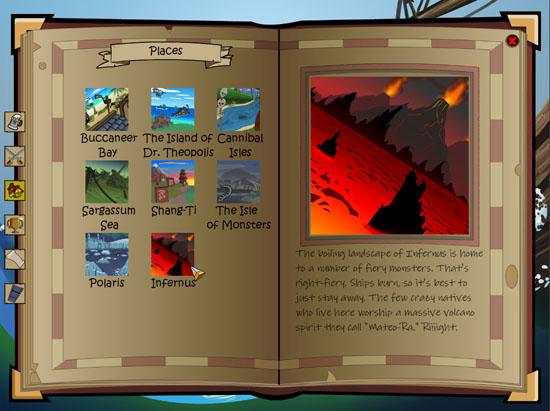 When an enemy ship is destroyed, a treasure chest will fall into the water, and clicking any chest will add a special item to your cause. Parrots can be used to buy extra ships to place in the water, while grog heals your current ships after they are damaged by enemy cannon balls. Gunpowder barrels destroy all enemy ships within a chosen radius.

If you’ve played Plants Vs Zombies, you’ll already be familiar with how the concept works. Balancing your leftover items with the amount of defense placed down is essential to securing the win. A bar on the right-hand side shows how long you’ve got until the level is over, and all you need to do is survive the onslaught without your main ship sinking or a zombie escaping on the left.

The action is quick-paced and provides an abundance of fun and excitement. As you conquer levels, different types of zombie ships and other enemies are introduced, which require you buy special ships to deal with them. Planning your fleet and arranging them into the perfect formation feels great, and there’s a wonderful balance between challenge and enjoyment throughout. 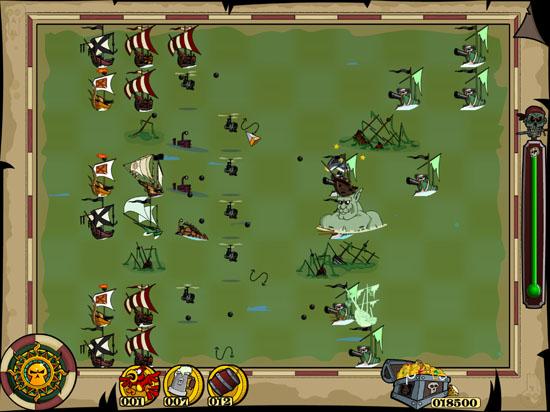 The different environments introduced through the story are lovely too, from the freedom of the open seas to hellish lava scenarios. There’s always something going on in between each level, be it characters discussing the upcoming struggle, or a well-crafted static cutscene.

I only really had an issue with one aspect of Zombie Pirates. Plants vs Zombies worked so well because the zombies (for the most part) stuck to their lane and your plants always attacked whatever was in front of them. In Zombie Pirates however, both yourself and enemy can move anywhere in the level.

This is great in one sense, but bad in another – you don’t have any control over where your ships are firing, and sometimes an enemy ship will be moving towards the left-hand side of the screen, and your ships will continue to fire at completely the wrong zombie. 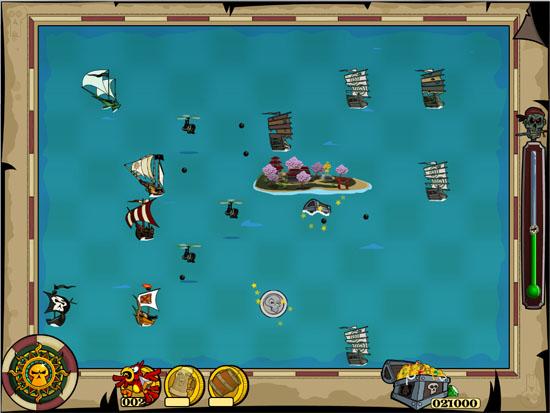 Still, this is but a minor issue when compared to how incredibly entertaining the game is as a whole. I played through the entire game in one sitting, as I simply could not tear myself away.

While the main story will take several hours to complete, there are also special challenges to partake in, achievements to earn, diamonds to collect and items to buy that will bump up your ship. Every now and again a game comes along with utterly surprises me, and Zombie Pirates has done just that. It’s fantastic fun, and well worth checking out.