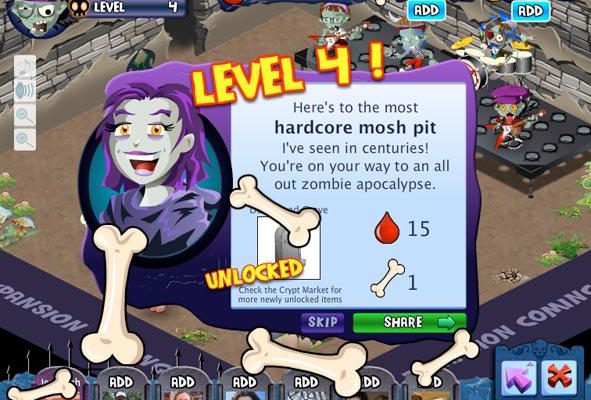 Much like the flesh-dripping living corpses themselves, the zombie phenomenon refuses to die. We’ve seen zombies take over the world in multiple movies, we’ve seen zombies annihilated by defensive suburban flora, and even one of this year’s best console games featured a decidedly non-sequitur zombie expansion pack. And now Facebook has Zombie Mosh, which mixes the rocking undead with various elements of Frontierville and Nightclub City. The concept has undeniable charm and the friendly developers plan to release additional features as the beta progresses, but it’s hard to see this as more than a novelty game that should have been scheduled for a Halloween release.

Zombie Mosh places you in your own underground mosh pit under the tutelage of a spunky undead girl named Darcy, who guides you through a basic tutorial and the game’s moderately extensive character customization options. Always wanted a dandy chainsaw through your head? Here’s your chance. And of course, since zombies tend to make a mess, you spend the next few minutes tidying up the fungus and other garbage that’s spreading on your floor. As with virtually every other action in the game, this rewards you with some coins or experience at the cost of energy. 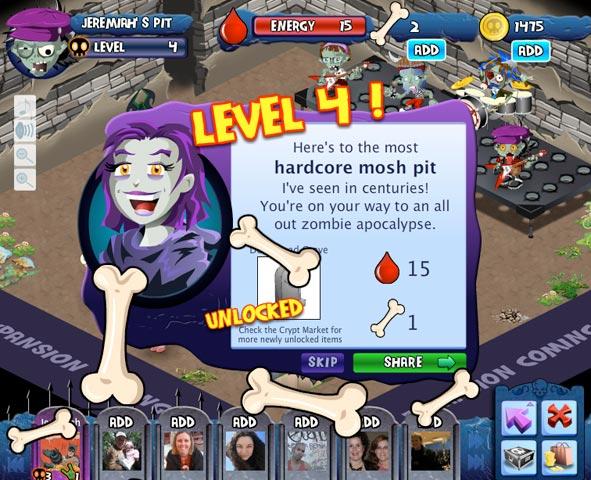 But the fun truly begins when a group of naïve humans walk in and start jamming to the band onstage, apparently under the impression that all those swinging eyeballs and rotting flesh are simply the work of an outstanding makeup artist. As zombies are a fairly discriminatory bunch, this simply cannot do. You then spend the next few turns digging graves for these poor fools and burying their screams beneath a few stacks of moshy dirt. Depending on the type of gravestone you chose, these former stoner girls and math nerds thrust their now-rotting arms from the graves a few minutes or a few hours later, ready to join to the moshing in zombie style. But make sure you get them soon—if you don’t yank your new zombie buds in time, they’ll rot to the bone right there in the grave.

And then, of course, it’s time to mosh. Click on one of your new zombie friends and you’ll trigger a heavy metal riff as you dance and bump into each other. You’ll then pick up the coins and experience skulls that drop (presumably from their insides), and start the moshing madness all over again. And that’s Zombie Mosh in a nutshell. 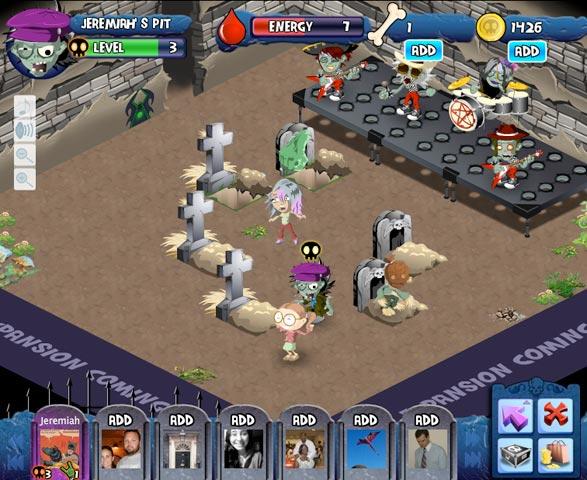 Sure, there are social options (you can gain fame, experience, and coins by cleaning up on your neighbor’s mosh pit), and you can decorate your own mosh pit with posters, graffiti, and the like, but Zombie Mosh’s current offerings end there. Zombie Mosh is a new game, however, and the developers have repeatedly noted that more is on the way, but these planned additions seem to merely amount to fleshing out (so to speak) the options already in place.

Leveling is also fairly difficult since you quickly run out of energy. When you do, Darcy pops up with her forks and proclaims that it’s time to eat some brains. The problem with brains, however, is that you can only buy them with real cash. Many social games provide a way to regain at least one or two ticks of energy using in-game currency, but there’s not even an attempt here. 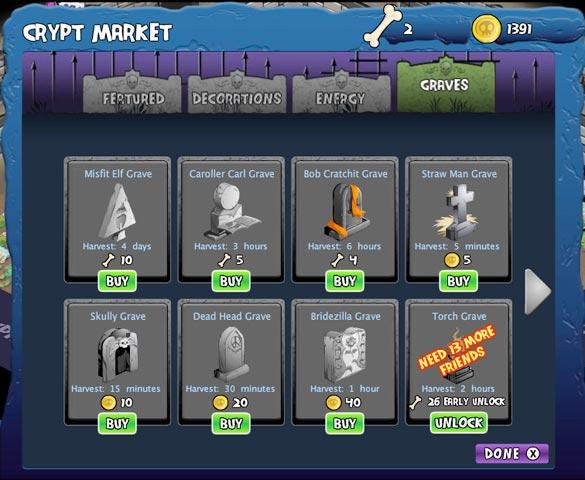 Zombie Mosh does, however, feature some satisfyingly rocking songs, usually in the punk or grunge genre. It’s a nice idea that’s inspired from games like Nightclub City and ClubBox, but it’s never really pushed in the right direction. There’s currently no way to win or access to a new playlist, and there’s no way to tell who’s actually singing which song. There were at least one or two of these songs that I was interested in adding to my own collection, but I wasn’t able to find any results even after a halfhearted lyrics search on Google.

If you’re one of the millions who just can’t seem to get enough of the zombie craze, however, Zombie Mosh might be a good game to get into. Couple that with a taste for punk or grunge music, and you might actually enjoy yourself for several levels. The music’s good, the art is endearing (Darcy’s artwork is particularly amusing), and the gravedigging aspect is a nice spin on the successful Frontierville formula. Still, much like a zombie, Zombie Mosh lacks a certain energy and its niche-based charms will likely only hold your interest for a while. And if zombies just aren’t your thing? By all means, stick to Frontierville and Nightclub City.